Annapurna Base Camp Trek in March and April 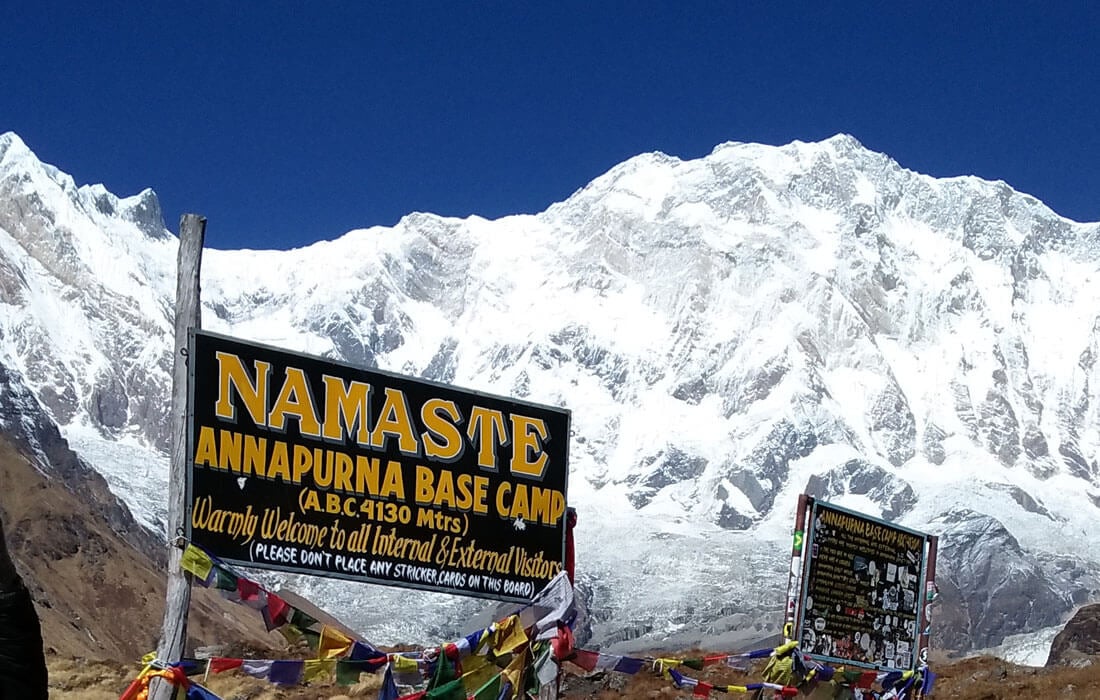 The Annapurna Base Camp Trek in March and April offers a picturesque view of the elegant Annapurna mountain range beneath the clear blue sky. At this time of the year, the trail takes you through lush green forests with blossoming red Rhododendrons and Magnolia.

Annapurna Base Camp Trek is one of the classic treks of Nepal that offers a perfect blend of dramatic mountain views, great natural canopies, Himalayan wilderness and warm cultural experience. Moreover, March and April (spring season) together inaugurate the divine festivals of the country.

Here are some of the important things you must know while traveling to the Annapurna Base Camp during March and April.

Highlights Of ABC Trek In March And April

Weather And Temperature In Annapurna Region In March And April

The months of March and April have stable weather with warm temperatures. The monsoon rain is still a couple of weeks away. The days are sunny and warm while the nights are cooler.

The temperature decreases with the gain of elevation. At higher regions, the temperature can be as low as -16 degrees Celsius. The precipitation is relatively low during March and April. The humidity may increase in April but the warmth to visibility ratio is still suitable. You can enjoy unobstructed views of the magnificent Mountain ranges under the clear blue sky.

Temperature and Precipitation in March

Temperature and Precipitation in April 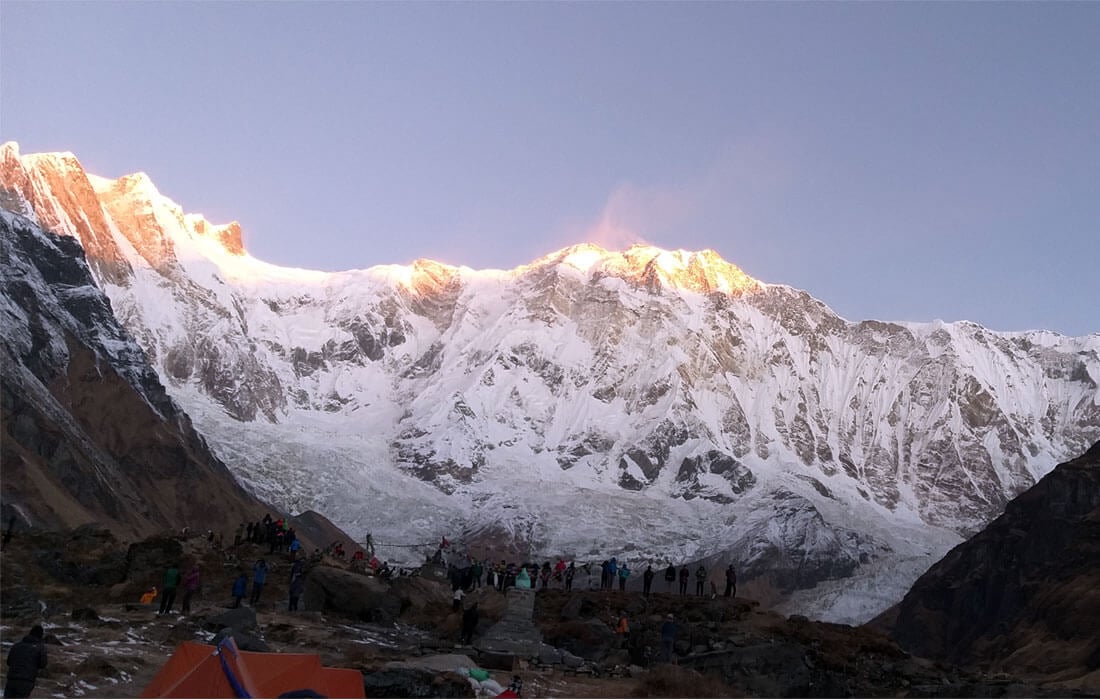 While in the major cities such as Kathmandu and Pokhara before and after the trek, different types of accommodation options are available. You can select the type of accommodation on the basis of your own preference and available budget. A number of luxury hotels to normal standard hotels are present.

During the trek, beautiful teahouses run by the local families are available. The rooms are cozy with attached bathrooms and hot shower facilities up to Chhomrong. As you go higher, only teahouses with basic facilities and shared bathroom can be found.

The alluring weather of March and April attracts hundreds of tourists to the Annapurna Base Camp every year. The costs of lodging as well as meals subsequently increase with elevation. You have to get your reservations done well in advance to secure your accommodation in decent teahouses. 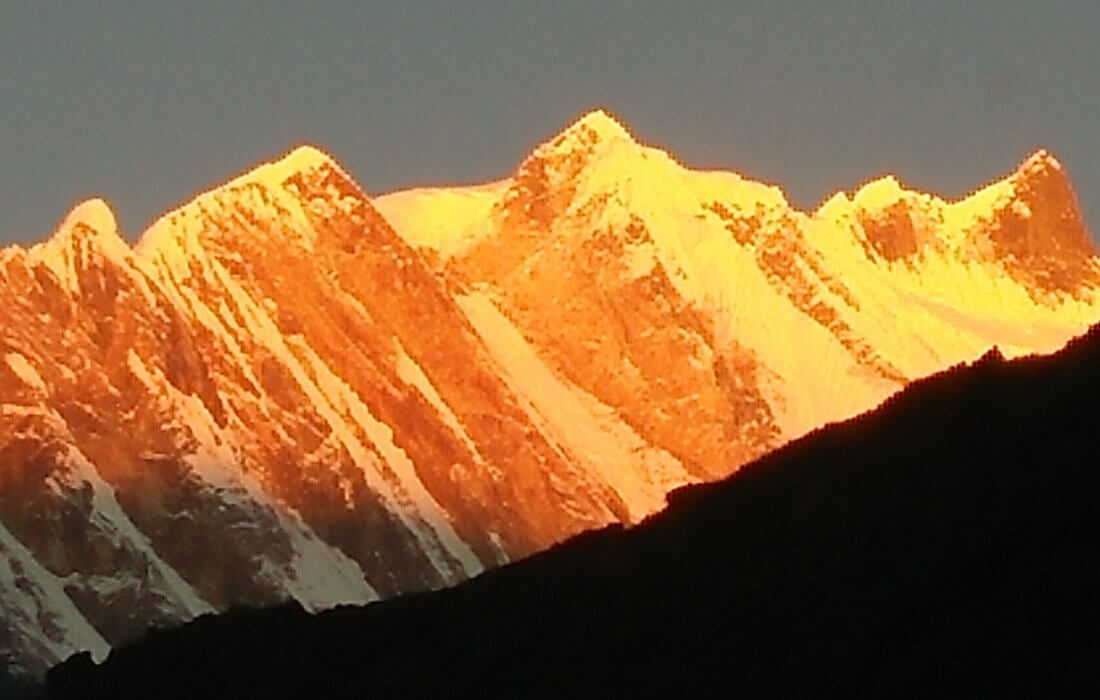 The Annapurna Base Camp Trek is one of Nepal's popular treks that takes you to the Annapurna Region's heart. This 11days trek gives you a chance to witness the glistening white Annapurna Massif, Lamjung Himal and Dhaulagiri.

March and April have the ideal weather for encircling the Annapurna Base Camp Trek. The entire trek route glows with the blooming spring flowers and freshness in the air during these months.

The trek starts from Lake City, Pokhara. Take a short drive to Kimche which marks the beginning of the delightful Annapurna Base Camp Trek.

Trek to the beautiful Chhomrong Village via Ghandruk. Wake up early and enjoy the morning sun of spring and stunning views of the Annapurna Mountain Range and Machhapuchhre.

Hike from Chhomrong to Deurali ascending through Bamboo. Trek to the astounding Annapurna Base Camp via the Machhapuchhre Base Camp. Enjoy the clear panoramic views of the glorious peaks of the Annapurna region.

Descend from Bamboo to Jhinu Dada. Soak and relax in the hot spring under the vibrant weather of March and April. Trek to Matque and finally return to Pokhara.

If you want a complete pleasing trekking experience, then Annapurna Base Camp in March and April is definitely the one for you. 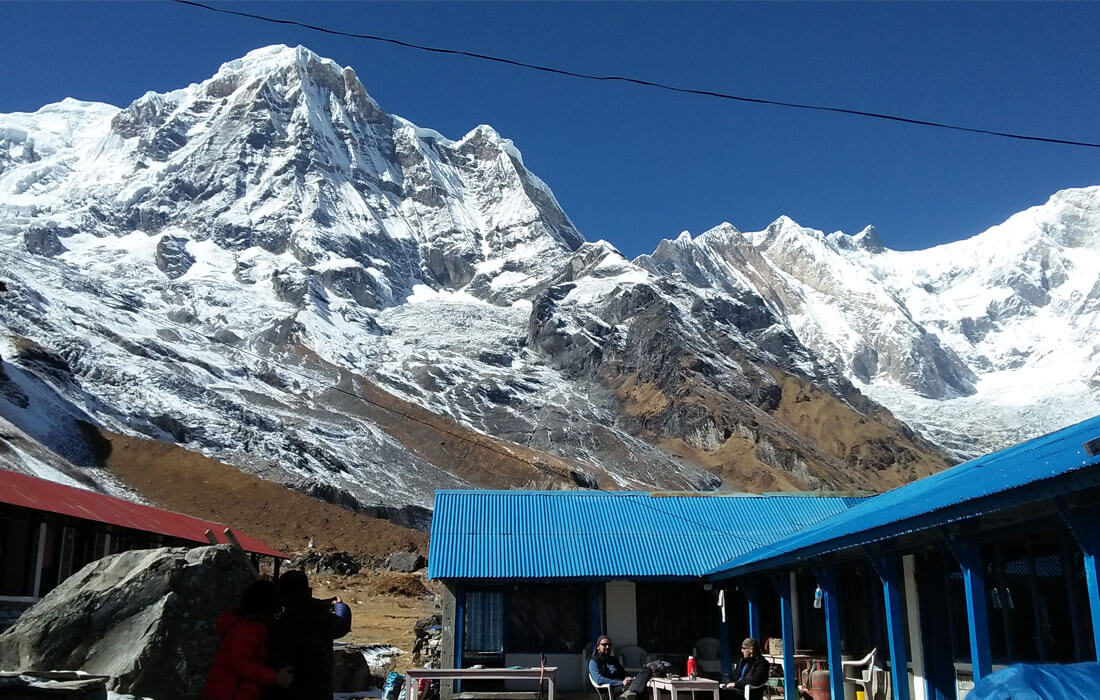 During March and April, you can witness the splendid Amphitheater of the snow-capped mountains beneath the clear starry sky and beautiful spring landscape.

The trek starts from the famous tourist hub of Nepal, Pokhara. Drive to Hile and trek to Ulleri.

Trek to Ghorepani and hike to Poonhill. Explore the warm culture and rich biodiversity of the region. Hike from Poonhill to Chhomrong via Tadapani.

Relishing the beauty of hills covered with Red Rhododendrons, ascend to Deurali from Bamboo. Trek to the magnificent Annapurna Base Camp via Machhapuchhre Base Camp. Enjoy the freshness of lively spring season in the air with great panoramic Mountain views.

Descend to Bamboo and hike to Jhinu Dada. Relax in the untouched hot spring and trek to Matque. Drive back to Pokhara.

If you want to trek to the Annapurna Base Camp in blossoming and alluring surroundings, opt for the Annapurna Sanctuary Trek in March and April.

The Annapurna Base Camp trek is an easy-moderate graded trek in the Annapurna region. Trekking to ABC is not difficult, so anyone with good health and used to walking regularly can easily complete the trek.

The trekking hours per day depends on the itinerary and the route selected. On average, you have to walk 5 to 6 hours each day.

The trail to the Annapurna Base Camp encompasses numerous ups and downs but does not require any technical climbing. During the months of March and April, the trails are dry and the stone-paved stairs along the trail are not very slippery.

You may experience slight altitude sickness after you reach an elevation of 2500 meters. Annapurna Base Camp itself is the highest point during the trek at an altitude of 4,130 meters. It is beneficial if you keep yourself hydrated and take sufficient time for acclimatization.

What To Pack For ABC Trek In March And April 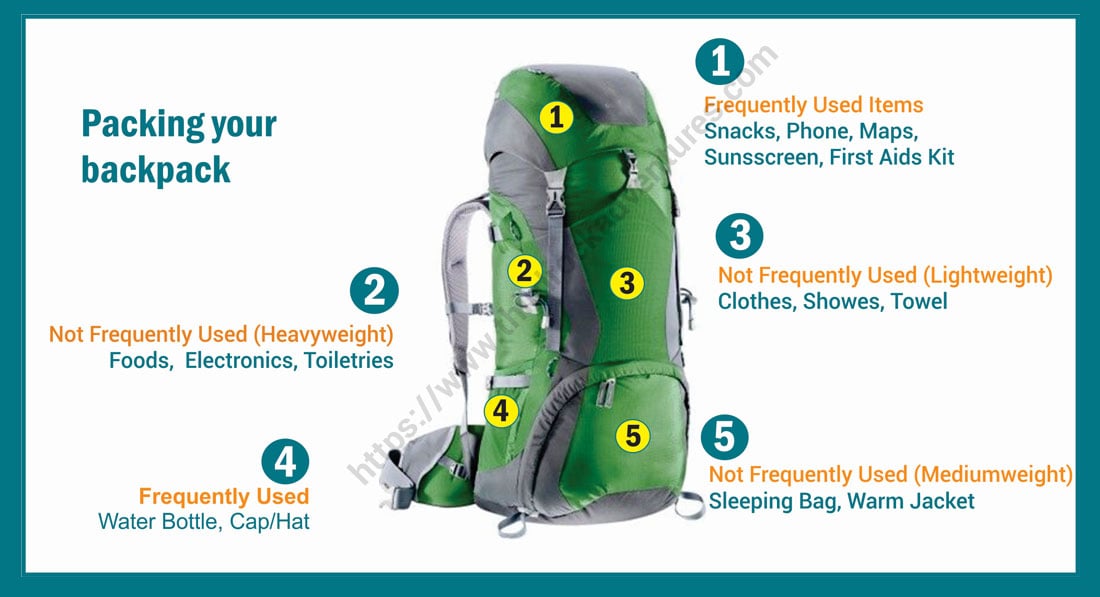 During the Annapurna Base Camp Trek in March and April, the days are sunny and you may sweat a lot. It is better if you go for lightweight cotton clothes. Since, the temperature fluctuates in the day and night, pack a mixture of light clothes to winter clothes.

It is essential that you pack only the necessary things and gears for the trek. The weight limit set for the luggage is about 15 kg or 33 pounds. Read the detail packing list for trekking to the Annapurna region in the following article: Packing List For Trekking in Nepal

Getting To Annapurna Base Camp 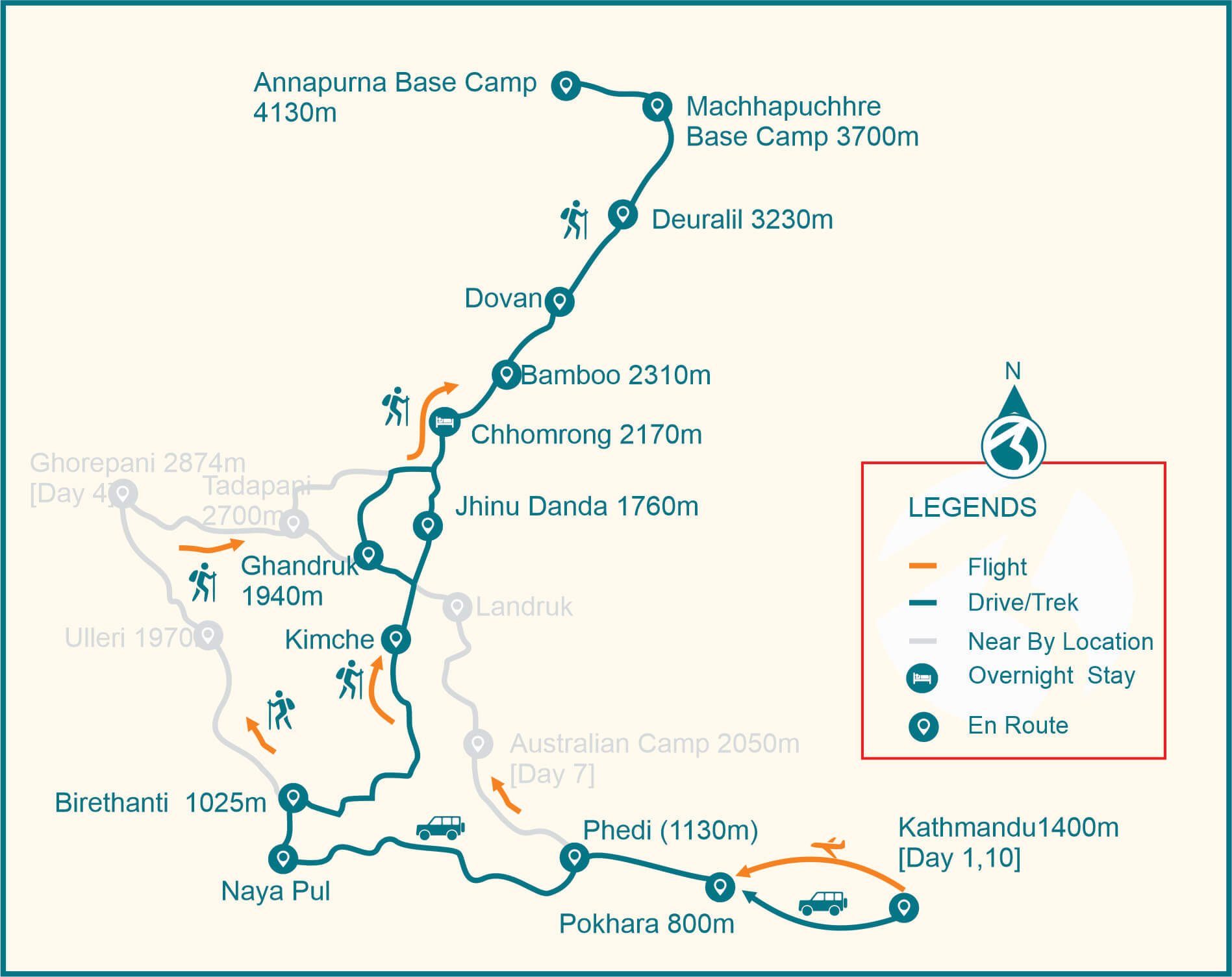 On a lower budget, you can also opt for a drive from Kathmandu to Pokhara. It takes about 6 to 7 hours to reach Pokhara by road. From Pokhara, you can take a short drive to the starting point of the trek.

March and April are the peak months for travelling to the Annapurna Base Camp. You must get your bookings done at the earliest.

Events In March And April In Nepal

Festivals are the essence of the rich Nepali culture. Nepalese people celebrate many festivals as per the Lunar Calendar. The festivals that mostly fall in March and April include:

Holi is a spring festival during which the entire country is set to get all colorful with the smearing colors. Holi marks the remarkable victory of good over evil.  You can get once in a lifetime opportunity to celebrate the joyous festival of colors during the Annapurna Base Camp trek.

Maha Shivaratri is a major festival of Nepalese people. Every year Maha Shivaratri is celebrated on the 14th day of the dark fortnight of Magha month as per the Hindu Lunar calendar. There is a profound belief that the Shiva principle is most active during this day. Thousands of pilgrims visit the famous Pashupatinath Temple on this day. While in Kathmandu before or after the trek, you may get to experience the soulful festival of Maha Shivaratri.

Nepal celebrates its New Year on the first day of Nepali month Baisakh which falls in April. While in major cities of Kathmandu and Pokhara, you get to see the entire country welcome the New Year with the utmost solemnity and celebrations. You can also celebrate the joyous Nepali New Year with other Nepalese trekkers during the trek.

Travel Tips For ABC Trek In March And April

1. What permits are necessary for the Annapurna Base Camp Trek?

2. How can I communicate during the ABC trek?

The mobile network will be available during the lower part of the trek. You can buy a local sim card (NTC/NCELL) for your mobile phone to communicate during the trek.

3. What about the internet facilities during the Everest Base Camp trek?

WIFI hotspots will be available during the trek. Sometimes, there may be low signals due to topographic obstructions.

Summing up, the months of March and April allow you to enjoy the pure untouched beauty of the Annapurna Base Camp. Everything from temperature to the landscape of the region is in your favor during these months. You must definitely plan your next spring break vacation to the exotic Annapurna Base Camp.

EK
Eric Kaelin | Thu May 20, 2021
The festival Mahashivaratri in Nepal is among the wildest festival of Hindus and I have always tried to be there in time. This article really helped me plan this trip with the festival in mind. I will combine a trek and Shivaratri in my next trip to Nepal.
Reply
IT
Ivan Taylor | Tue Mar 30, 2021
Should have read this blog earlier. Had I read this blog 2 months earlier, I would have been to Nepal this March. I heard the ease of restriction to foreign tourists in Nepal and thus March would have been perfect for me.. But hey thanks, I will be traveling next year in March. thanks for such in-depth details of the trek- I loved the picture-presentations.
Reply