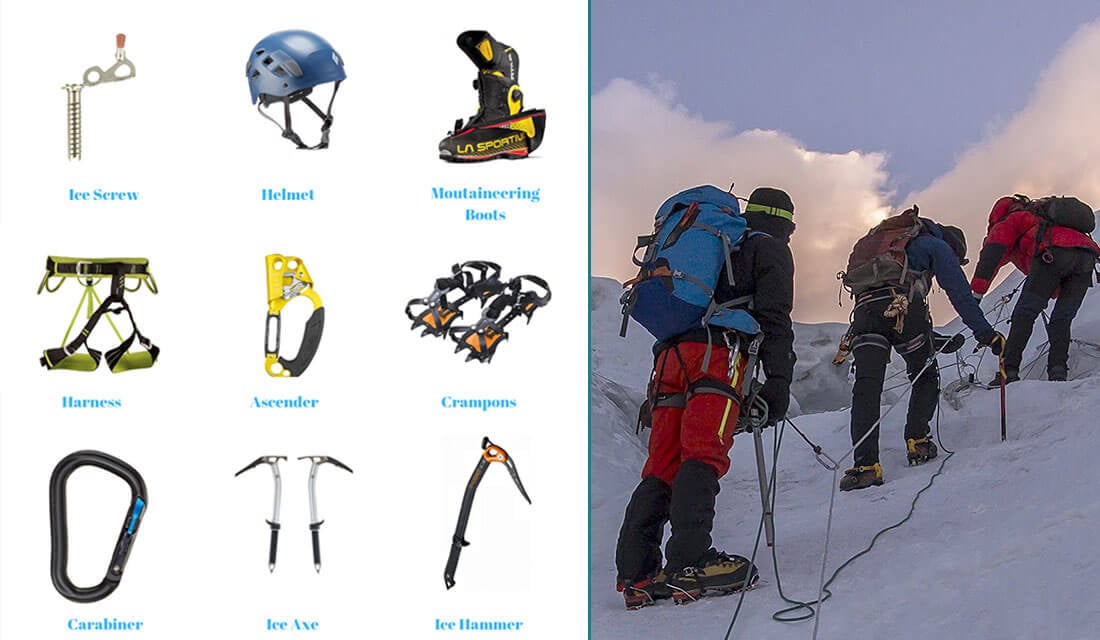 Lobuche Peak Climbing is one of the most sought-after Himalayan Trekking peaks of Nepal, considering the trekking route of the legendary Everest Base Camp it follows and its technical ascent over 6000m. Prominently standing at an altitude of 6119m in the Everest Region, Lobuche Peak climbing is gaining popularity among climbers, alpinists, and adventurers for the mind-boggling panoramic views of the Himalayas including the mighty Everest, Lhotse, Pumori, Ama Dablam, Nuptse, Island Peak, and others.

From the summit, the jagged Himalayas are out of this world. Lobuche Peak Climbing in Nepal is a challenging and rewarding adventure, something different than regular trekking- it entails the use of climbing gears and mountaineering equipment.

Apparently, without proper training and gears, no climb is doable; comfort, safety, and success of peak climbing are highly reliant on the gears and pre-climb training. That said, one must be meticulous while choosing gear and equipment, provided the pre-climb training will be conducted at the High Camp.

Ascender also called Jumar is a tool primarily used for ascending on a rope. It is made of metals, and provide sturdy support for an upward ascent. It is comfortable to use with gloves or mittens for a firm grip.

Alpine climbing harness or simply harness is a lightweight, adjustable and comfortable wearable gear. It comes with a waist belt and leg loop to secure lock around your waist and thigh with a rope or anchor point.

A carabiner (karabiner) is yet another must-have gear for peak climbing- minimum 2 locking carabiners are obligatory. Carabiner consists of a metal loop used in safety-critical systems. It is conveniently used in all rope-intensive activities.

Descender (Figure 8) is an aluminium 8-shaped tool used during descent- effectively helping to dissipate the heat caused by the friction. Descender is used with harness and carabiners for smooth descent on a rope.

Ice Axe is indispensable when it comes to peak climbing- used for ascending as well as descending. It is made of stainless steel or aluminium, primarily used to cut and penetrate the ice surface or deep snow (can be used as a walking stick considering the assistance of shaft and spike.) Another remarkable use of Ice Axe is "Self-arrest."

Ice Hammer resembles Ice Axe at a glance and can be used as an alternative to adze of an ice axe. It is an optional tool in the gear list for mountaineering or climbing. Ice Hammer is predominantly used for hammering the hard ice.

An Ice screw is a tubular screw (10 -23cm length) used during ice climbing or crevasse rescue. It is one of the important climbing arsenal used for anchor and running belays.

The helmet is an imperative gear in the checklist of climbing gear- for the protection of head (obviously) and successful climbing. The importance of wearing a helmet while climbing cannot be overlooked, considering the consequences of not wearing it.

Sturdy and quality boots are must if you are thinking of any mountaineering and climbing adventure. Mountaineering Boots play a vital role in peak climbing; the importance of boots is self-evident considering injuries, frostbite and smooth movements and shifts on the snowfield and ice field.

A Tape Sling is a sewn loop of webbing used as anchors to climb a rope. It is made of nylon or Dyneema. It can be used in conjunction with other equipment for reduction of rope drag.

Naba Raj Amgai, stepped into the world of travel and tourism in 1996. He is Founder and Managing Director of Third Rock Adventures.

Beginning his journey in the tourism industry as a humble Porter Guide to founding hospitality establishments and an adventure travel company, he has come a long way.

In a career spanning more than two decades, he has achieved more than anybody dreams of achieving. Along with his professional achievements, his selfless contribution towards his community and society has won him a lot of accolades and praises.

Having dedicated more than two decades in the tourism and hospitality sector, he has amassed a wealth of experience.

After passing high school, he began helping out some trekking guides and was soon recruited as a porter guide at a reputed trekking agency. Within a short time, he was individually guiding clients across the well-known trails of the Himalayas.

He went on to lead tour groups on multi-country tours to Nepal, Tibet, Bhutan and India. Being a part of mountain climbing expeditions familiarised him with expedition logistics and operations. Later on, he went to become the Executive Director and took over the reins of Operations, Sales and Marketing departments. Spending several years in the tourism field has made Naba Raj Amgai a destination expert.

Travelling is his passion and he has been to many countries across the world – USA, Canada, Australia, Japan, Holland, Germany, Austria and many parts of Asia.

His journeys to different parts of the world have enriched his travel experience and knowledge. This experience has been instrumental in planning and organizing successful trips for several clients.

As of today many reputed travel companies, hotels and restaurants are under his leadership. A dynamic and proactive leader, he continues to inspire and motivate people from all walks of life.