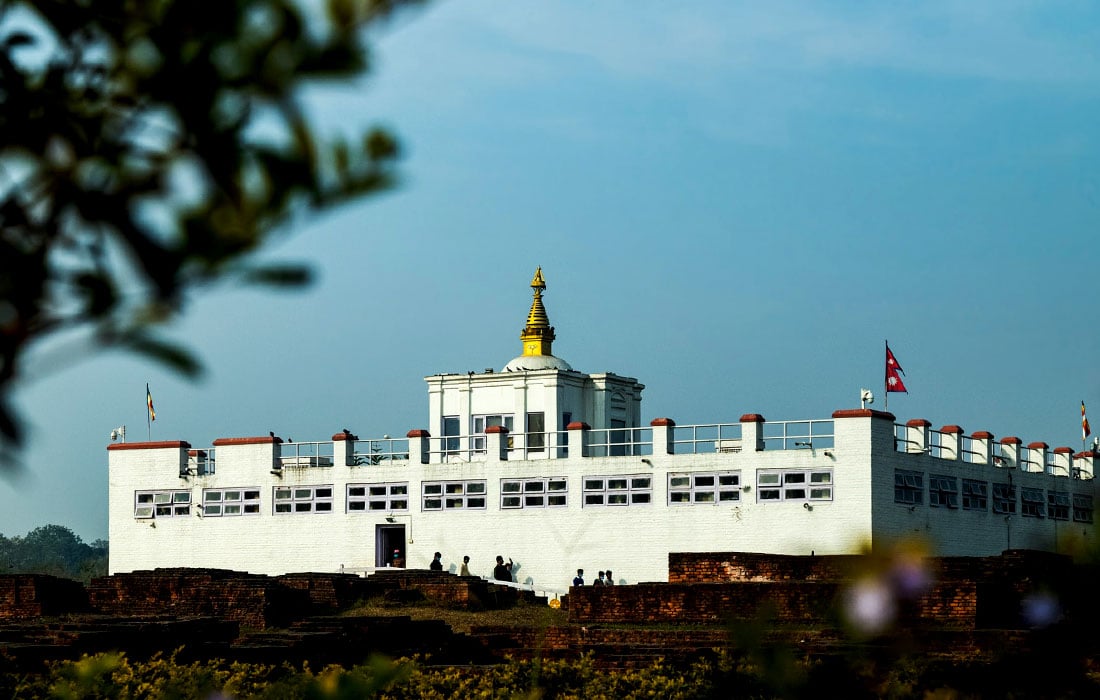 Lumbini, a homeland of Buddha, lies in the south-western of the Terai region of Nepal. This place is one of the sacred Buddhist pilgrimage sites that holds great both historical and religious importance. From the magnificent Lumbini Museum to the Sacred Garden, visitors to this exotic city will discover a trove of spiritual, cultural, and historical treasures. One of the most explored places in Nepal, Lumbini attracts not only Buddhists but also people from different religions.

A UNESCO World Heritage Site, Lumbini has an abundance of Buddhist monasteries built by several Buddhist countries worldwide and ancient stupas dating back to 2000 years. One of the important sites of Lumbini is the Mayadevi temple, which is considered the birthplace of Lord Buddha. Likewise, there are two zones- Mahayana and Vajrayana monasteries in the western zone and Theravada monasteries in the eastern side. Lumbini is a sacred place where Maya Devi gave birth to the Buddha, and there are many inscriptions, bricks, and other evidence which proved it to be the birthplace. Also, in 1896 while rediscovering the process, Nepali archaeologists found the Ashoka Pillar, which confirmed the vital linkage between Buddha and Lumbini.

Getting from Kathmandu to Lumbini
Nepal Buddhist Pilgrimage tour - 7 Days

Blessed with several ancient stupas, shrines, and monasteries depicting various stages of Buddha's life, Lumbini has a lot to offer to its visitors. To help you make the most of your time in this amazing city of Nepal, refer to our list of the top things to do in Lumbini.

Without visiting the monasteries of Lumbini, your tour to Lumbini is incomplete. Lumbini Monastic Site includes several temples and monasteries where you will get an insight into the life of Gautam Buddha. No wonder there are several monasteries in Lumbini that purely follow Buddhist practices. While exploring the places, you'll also get a chance to understand the significance of Buddhism- the birth, enlightenment, and death of Gautam Buddha. These elegant monasteries have impressive structures and reflect their unique version of Buddhism. There are two east and west monastic zone in the Lumbini.

In the west monastic zone of Lumbini, there are some incredible monasteries showcasing aesthetic architecture here, and most of them are open for visitors. All monasteries have their design reflecting the various nations' different architectural and religious styles. But collectively, they create a wonderful collection of Buddhist sites. There are altogether 14 monasteries and two meditation centers in the zone.

South Korea's Dae Sung Shakya Temple is one of the tallest monasteries in Lumbini. While stepping inside each of the monasteries, you'll feel like getting into a different country. In the center of the west monastic zone, you'll find the beautiful lake surrounded by several incredible monasteries. The most eye-catching is the Great Lotus Stupa, sponsored by Germany. It has an attractive large garden with colorful decorations.

Here are a few monasteries you can visit in the West-Monastic Zone of Lumbini:

Lumbini Monastic Zone also consists of the east monastic zone with several monasteries representing the Theravada (Hinayana) school of Buddhism. Different countries built and operated monasteries and offer several spiritual programs showcasing the local traditions to the visitors. While visiting this east zone, you'll experience some of the fascinating religious architecture of Asia.

One of the most captivating buildings is the Royal Thai Monastery, built from the shining white marble inspired by the great wats of Thailand. Next is the Myanmar Golden Temple, which looks is similar to the famous Shwedagon Pagoda in Yangon. Likewise, Sri Lankan Monastery is surrounded by water and spread over several levels. The Mahabodhi Society Temple of India is small but contains several alluring images depicting the story of Lord Buddha.

Here are the lists of monasteries of the East Monastic Zone of Lumbini:

Lumbini Museum is another exciting place to visit in Lumbini. Located inside the UNESCO Heritage Site of Sacred Garden area, it is an incredible place to explore where you can learn about Buddhist history. The museum displays about 12000 artifacts, including religious manuscripts, metal sculptures, terra cottas, and even coins collection from Maura and Khusana dynasties. You can explore the Lumbini International Research Institute (LIRI) just opposite the museum. This place offers research facilities for the study of Buddhism and religion.

Maya Devi Temple is a notable landmark in Lumbini. It is also one of the ancient Buddhist temples, well-known as Gautam Buddha's birthplace. It is also a UNESCO World Heritage Site which lies in the middle of the park grounds called Lumbini Development Zone. While exploring around the temple, you'll get a chance to witness a scared pool called Pushkarini and a scared garden.

Inside the Maya Devi Temple complex, there is the Bodhi tree. Under the Bodhi tree, Buddhist monks sit for meditation and chant spiritual scripts. This ancient Peepal tree is clad in colorful prayer flags. Local people believe that your desires are often granted if you tie the colorful prayer flag and make a wish. Also, in front of Maya Devi Temple, there is a large Maya Devi Pond where Queen Mayadevi took a bath before giving birth to the Lord Buddha. In this pond, Lord Buddha also bathes for the first time. On special occasions, the steps around the pond are illuminated with oil lamps to worship the sacred place.

Ashoka Pillar sits right next to the sacred Mayadevi Temple. In 249 BC, Emperor Asoka erected this excellent piece to commemorate his visit to Lumbini. Nepalese archaeologists rediscovered this 6-meter tall pillar in 1896. You'll witness the Brahmi script engraved on the pillar. Also, in the inscription, he proclaims this place as the birthplace of Buddha.

World Peace Pagoda in Lumbini is also known as Japan Peace Stupa. It is an early 21st-century monument that is a symbol of peace. It is one of the major tourist attractions in Lumbini. Constructed by Japanese Buddhists, the stupa structure is fascinating with traditional pagoda-style architecture. This glorious stupa is colored white, and a giant golden Buddha statue will definitely catch your eyes.

Boating in the central canal Lumbini is another fun thing to do in Lumbini. While boating, you can witness beautiful structures on both sides of the Mayadevi complex. With the collaboration of Lumbini development, trust boating has been one of the most popular activities visitors enjoy inside the Mayadevi complex.

The Eternal Peace Flame Of Lumbini

Eternal Flame is another major attraction of the Lumbini garden. Situated at the south end of the canal, it resembles the enduring effort to create peace and harmony in the world. In 1986, the Eternal Peace Flame was created to commemorate the International Year of Peace.

The birthplace of Gautam Buddha is not only an important Buddhist pilgrimage site but also now a sanctuary for cranes. According to legend, there is an essential link between Sarus Crane and Buddha, so it is admired in Lumbini and other parts of the world. Lumbini Crane Sanctuary is one of the major attractions of Lumbini and is definitely worth a visit.

Well, Crane is one of the world's tallest flying birds, which has an elegant appearance with a grey body and a redhead. It also has a peculiar trait that people have beloved for many years. They always live in pairs never separate from their partner for a single moment. This bird is considered a love sign of pure faith and dedication. Thus, this crane sanctuary in Lumbini is an important way to honor this special bird and preserve the species.

Cycling is another best way to explore the sacred area in Lumbini, including a large number of Buddhist monasteries, meditation centers, temples, and shrines. You'll get plenty of time to explore Buddhist sites. Most monasteries lie in the middle of a large green area and are easily accessible at the end of a long road. During the bicycle tour, you'll get more insight into the rural parts and learn about the local culture lifestyle of terai people.

Undoubtedly, Lumbini is the most sacred pilgrimage site to Buddhists worldwide. It holds both religious and spiritual significance among the Buddhist disciples. Most people worldwide travel to Lumbini to witness and explore Buddhism's religious and philosophical aspects. No wonder, for the meditation, you'll find a better tranquil place than the birthplace of Gautam Buddha. You can visit the sacred Lumbini Heritage site, any one of the monasteries or meditation centers, and learn meditation techniques. Here you can practice the art of meditation, understand the philosophy and techniques behind it, and have control over your mind and thoughts.

Tilaurakot is one of the oldest cities in South Asia and Siddhartha Gautam's hometown. Once the capital city and Shakya kingdom where the prince Siddhartha Gautam was born, he grew up and spent 29 years in the palace. You can even visit the Kaplivastu Museum nearby Tilaurakot, where you can glimpse some artifacts discovered during the archeological work in Tilaurakot.

Further, it is also an important site for Hindu devotees as there is Samai Mai Hindu Temple where many people come to worship Samai Mai. Many tourists and Buddhist devotees visit Tilaurakot to explore more about this ancient town and behold an initial step of the epic journey walked by the Gautam Buddha. There is a belief that Lord Buddha left his luxurious life and started the spiritual journey from the eastern gate. Standing precisely at the east gate, you can feel the nirvana and be a part of the modern spiritual journeys.

Lumbini is a holy place, and many travelers visit here to procure more than tourist experience and find more significant ways to explore spirituality. You'll get an opportunity to see the most beautiful monasteries built by several Buddhist countries like China, Myanmar, Cambodia, Sri Lanka, Japan, and Germany. While visiting these monasteries, you'll get to soak in the peaceful and spiritual environment.

However, there are many top things to do in Lumbini but for an immersive experience, you can visit some Buddhist meditation centers and indulge in meditation and yoga therapy. You can also interact with the Buddhist monks who worship in the vicinity of monasteries. Each monastery will allow you to experience the spiritual side. After exploring this holy place, you'll feel more lively, vibrant, and awake from deep inside.

If you are planning for any tours to Lumbini then feel free to get in touch with our experts to know more.

DM
Dominique Moreau | Mon Mar 21, 2022
Never knew that we could do so many things in Lumbini :)
Reply