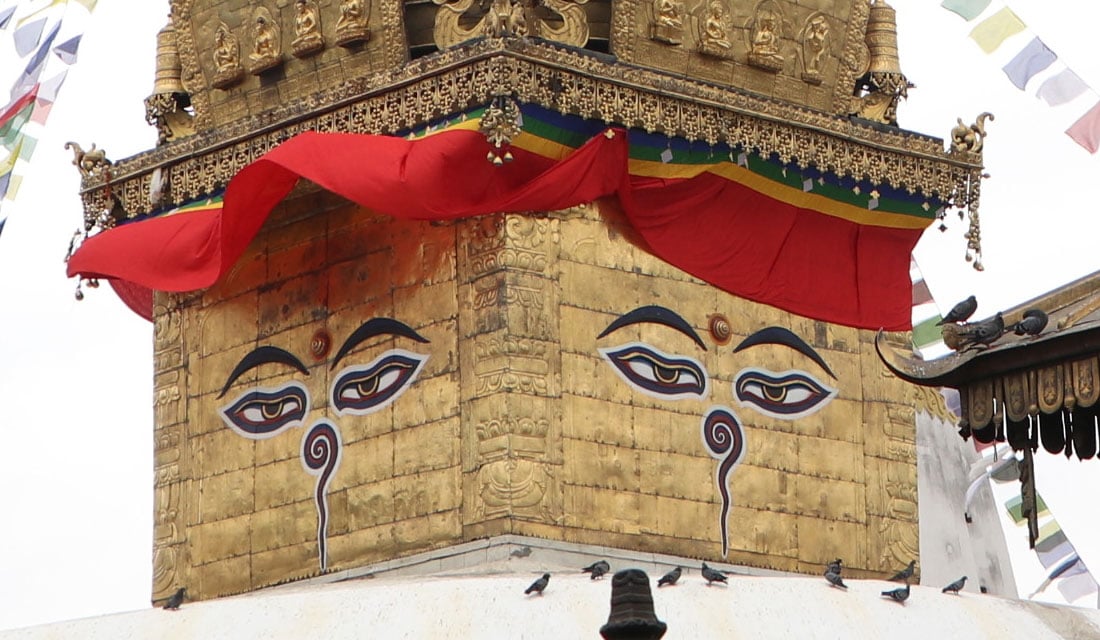 Swayambhunath Stupa, a UNESCO world heritage site in Kathmandu, is the glory of Kathmandu since the 5th century and a sacred Buddhist pilgrimage.

Overlooking Kathmandu valley and offering splendid panoramic views of Kathmandu valley, this site is an ideal place to escape the hustle and bustle of Kathmandu. Nestled on top of the hill, Swayambhunath is truly a must-visit place in Kathmandu, as suggested by thousands of travelers.

A few miles away from Tribhuvan International Airport (approximately 7 miles), Swayambhunath can be reached within 30 minutes by bus.

And to the point of no surprise, you can spend all day long here allured by its otherworldly beauty. This could be a reason why travelers who once visited Swayambhunath want to visit again or at least write wonderful reviews on websites and TripAdvisor. (Google alone has more than 7400 reviews.)

The enormous whitewashed dome with all-seeing eyes of Buddha and gilded spire is visible from miles away. But you know that sensational feeling when you stand right next to the lofty stupa.

Stand in awe! While Swayambhunath is a box full of surprises for a new visitor, it is still a box full of wonder to a regular visitor.

How To Reach Swayambhunath Temple

#1. Meaning of Swayambhu and the name " The Monkey Temple" 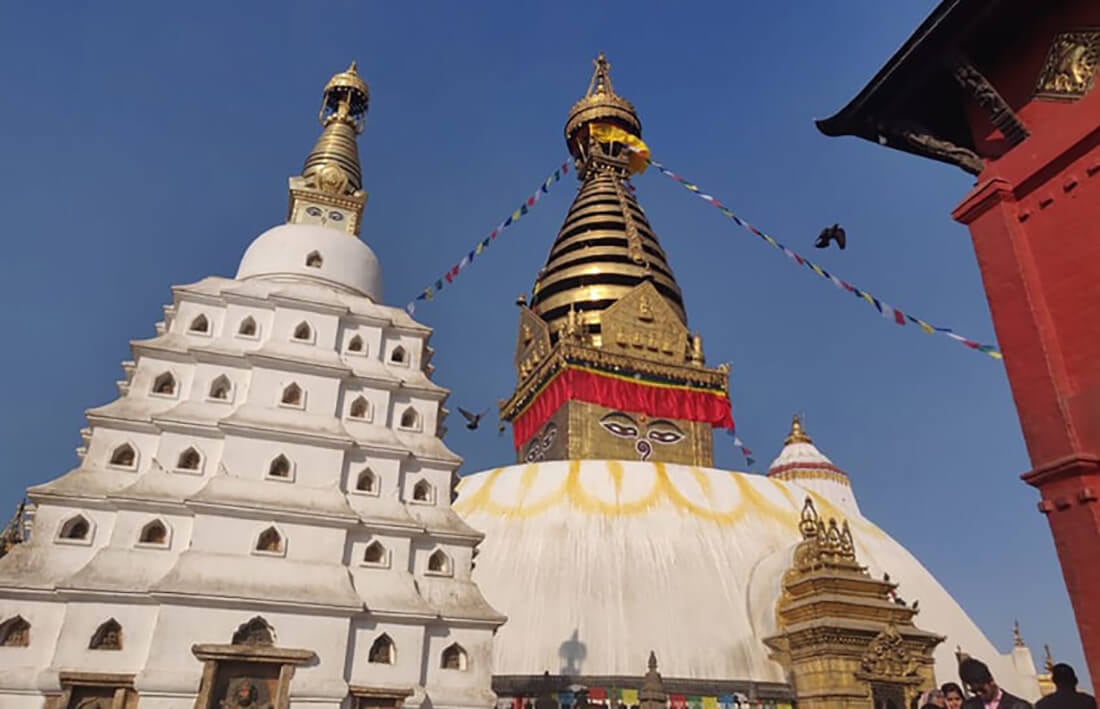 Swayambhu (sometimes Swayambhu or Swoyambhu) means self-sprung, self-existent, or self-risen. The word Swayambhu is derived from two words- 'Swayam,' which means 'self' and 'bhu,' which means 'to take birth.'There's a history behind it - the legend has it that Swayambhunath Stupa self-existed.

And the reason behind its name, The Monkey Temple, is the abundant monkeys living in its vicinity. (know more about it in number 4) 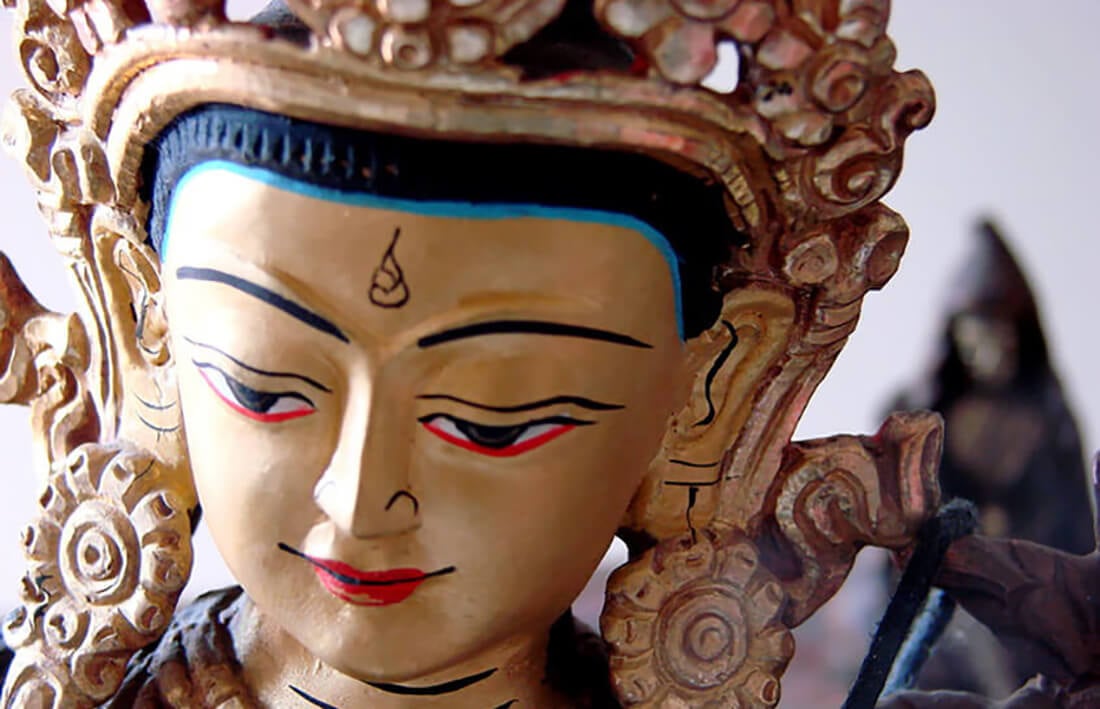 According to the myth, Swayambhunath was light before it turned into a stupa.

As per Swayambhu Puran (Buddhist Scripture), Kathmandu valley was once an enormous primordial lake with a miraculous lotus radiating light.

The Bodhisattva Manjushri was allured to the brilliant shine of the lotus and cut a gorge in the mountain with his sword, transforming the lake into Kathmandu valley, lotus into a hill, and the light into the present Swayambhunath. 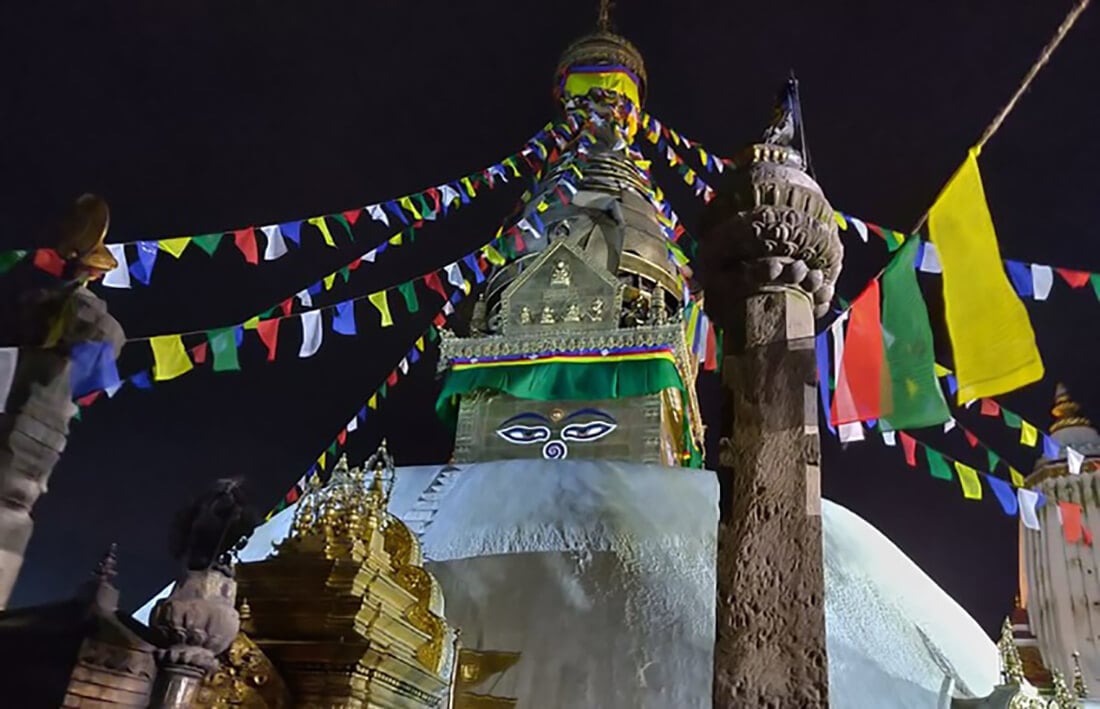 You might not know, but the entire stupa from its massive white dome to the gilded spire is symbolic.

The white dome represents the earth, the pair of eyes in all four sides are actually Buddha's eyes signifying all-seeing perspective. The Buddha's eye on each side of the stupa gazes Kathmandu valley in all directions.

The nose-like structure in between the pair of eyes is the Nepali number Ek (one), and the gilded spire above represents the 13 stages to nirvana. The spire was painted with 20kg of golds during its renovation in 2010. 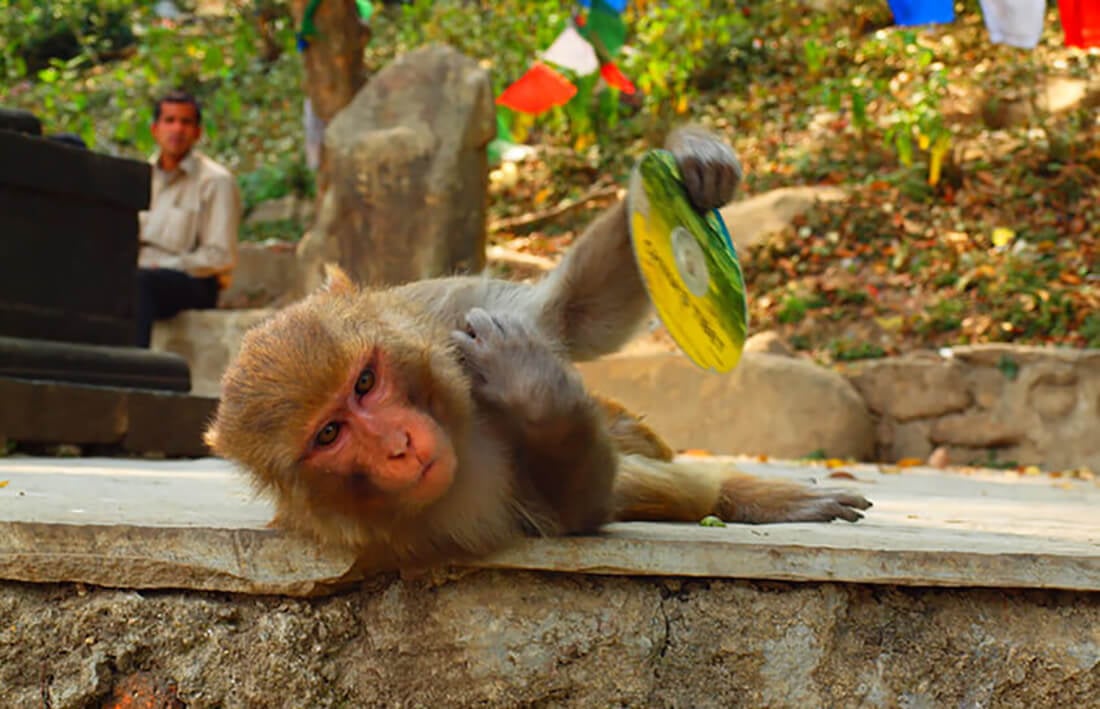 Swayambhunath stupa is home to abound monkeys. There are more than 200 monkeys around Swayambhunath residing in the lush forest to the northwest of the stupa.

It is believed that the monkeys reincarnated from the head lice of Manjushri, one of the Bodhisattvas of Chinese Buddhism. You will see those monkeys almost everywhere around the stupa.

Beware as they might attack you if they see you carrying a bag or plastic bag. 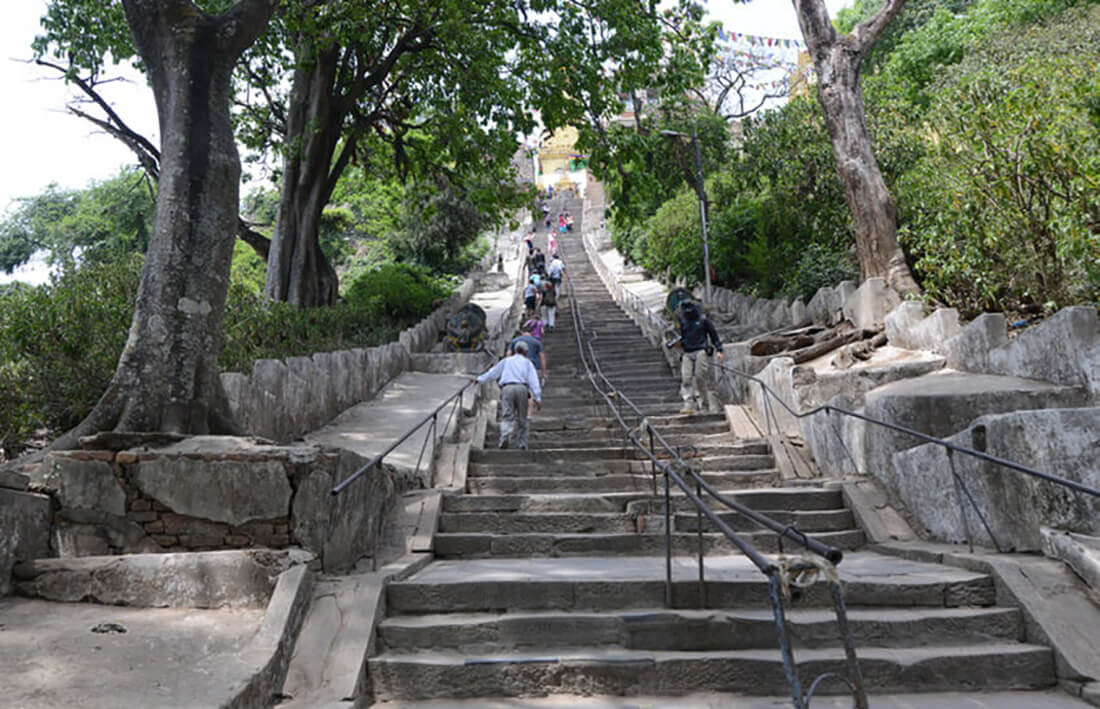 While there are two entrances, the main entrance will lead you to the stupa through 365 stone steps. You will have to climb 365 stone steps with few buddha statues, stone chaitya, and souvenir stalls along the way. And most of the time, you have to walk past the troop of monkeys along the stairway.

The steep ascent, in a way, is a pilgrimage to pay homage to the stupa. Some people may find it challenging to climb 365 steps. As an alternative to the Eastern stairway (just to skip the 365 steps), there is another way to the stupa on the western side of the stupa. 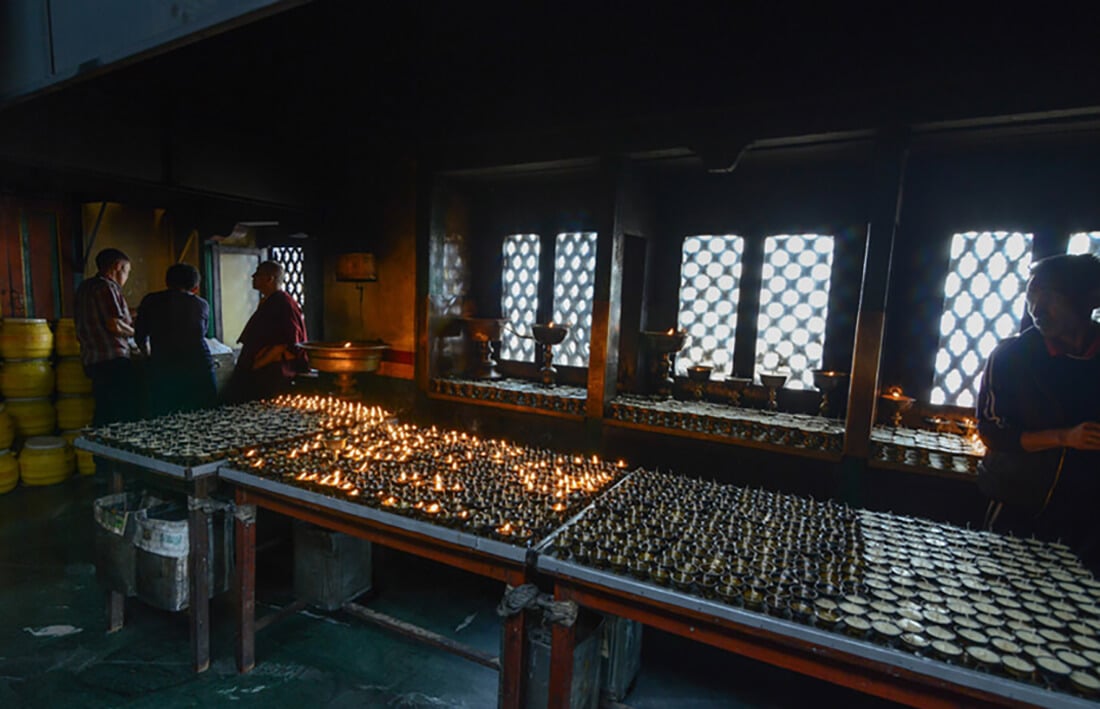 Swayambhunath Buddist Museum is an archaeological museum that depicts the life of Buddha through collections of Buddhist statues. To accurately locate this museum, look for a small red brick building with an ornate wooden door.

Note: You don't have to pay to visit this museum. It might take you a few minutes to roundabout the museum, and you will enjoy it. 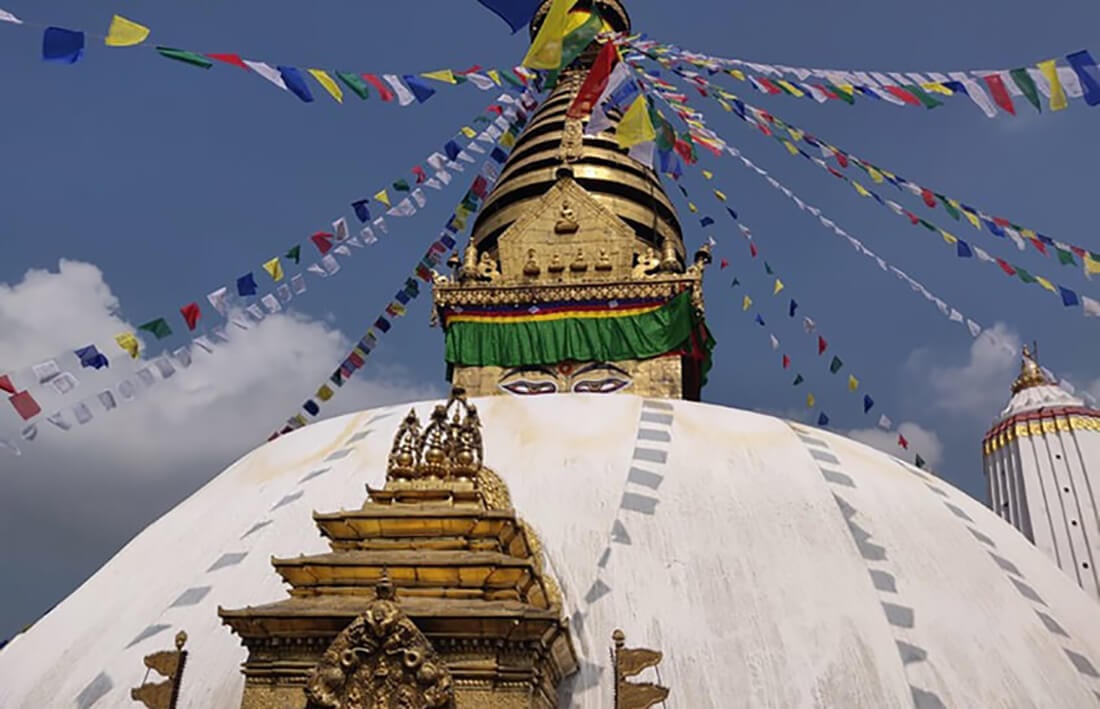 The Five Dhyani Buddhas (statue) can be seen in the gilded pentagonal toran above the eyes of Buddha.

Five Dhyani Buddhas are icons of Mahayana Buddhism, found in Buddhist iconography. Vairochana, Akshobhya, Ratnasambhava, Amitabha, and Amoghasiddhi are the five Dhyani Buddhas believed to be transcendent beings and visualized during meditation.

The picture here shows the five Dhyani Buddhas. They are associated with a distinct color, gesture, and symbolic animal. They represent a different aspect of enlightened consciousness and are considered guides to spiritual transformation.

#8. Blend of Buddhism and Hinduism 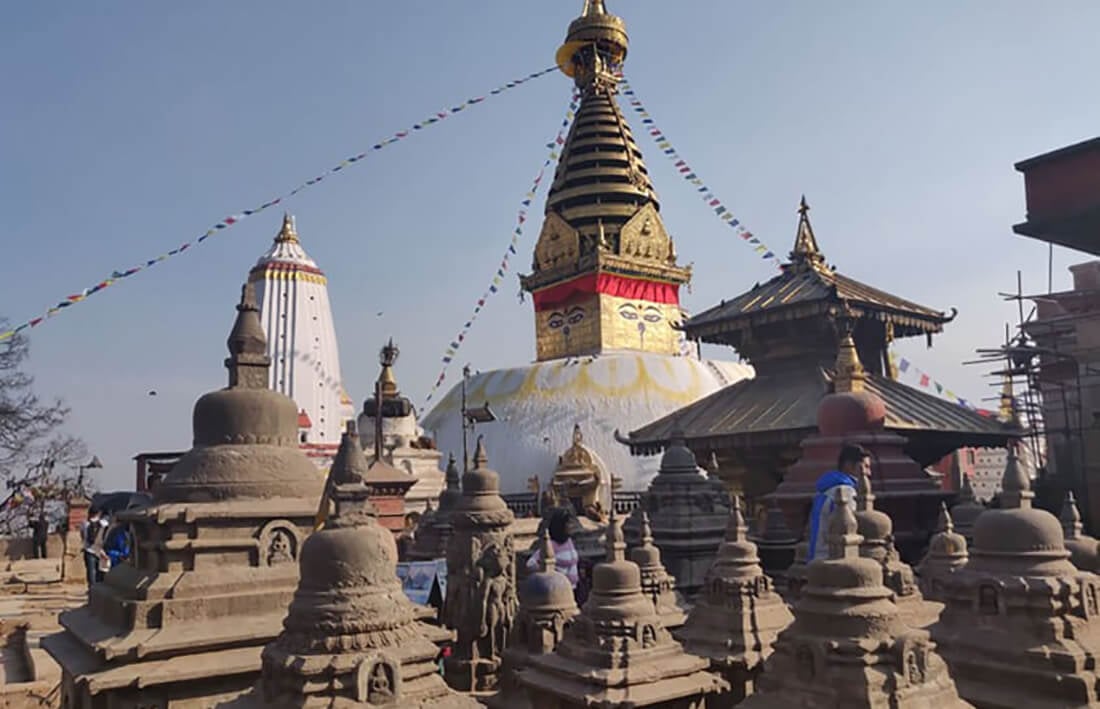 Don't get surprised if you come across a Hindu devotee around the stupa. Swayambhunath is one of the oldest (2000 years old) religious architecture, and one of its kind.

The stupa is believed to be a symbol of harmony since it showcases the blend of Buddhism and Hinduism in Nepal. 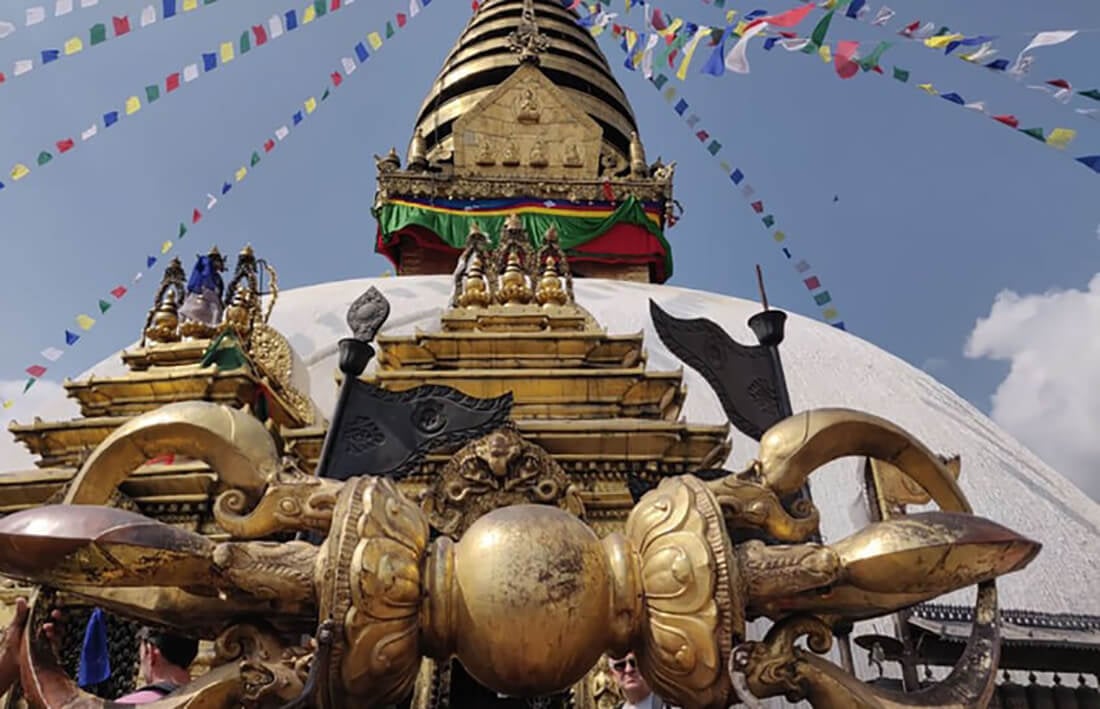 On ascending the 365 stairway to the stupa, you will find an enormous brass-plated Vajra (Lightning Bolt) embellished with animals of the Tibetan calendar. This huge and impressive lightning bolt garner the stupa and is a symbol of the power of enlightenment.

Note here: circumnavigate the stupa in a clockwise direction from the Vajra. 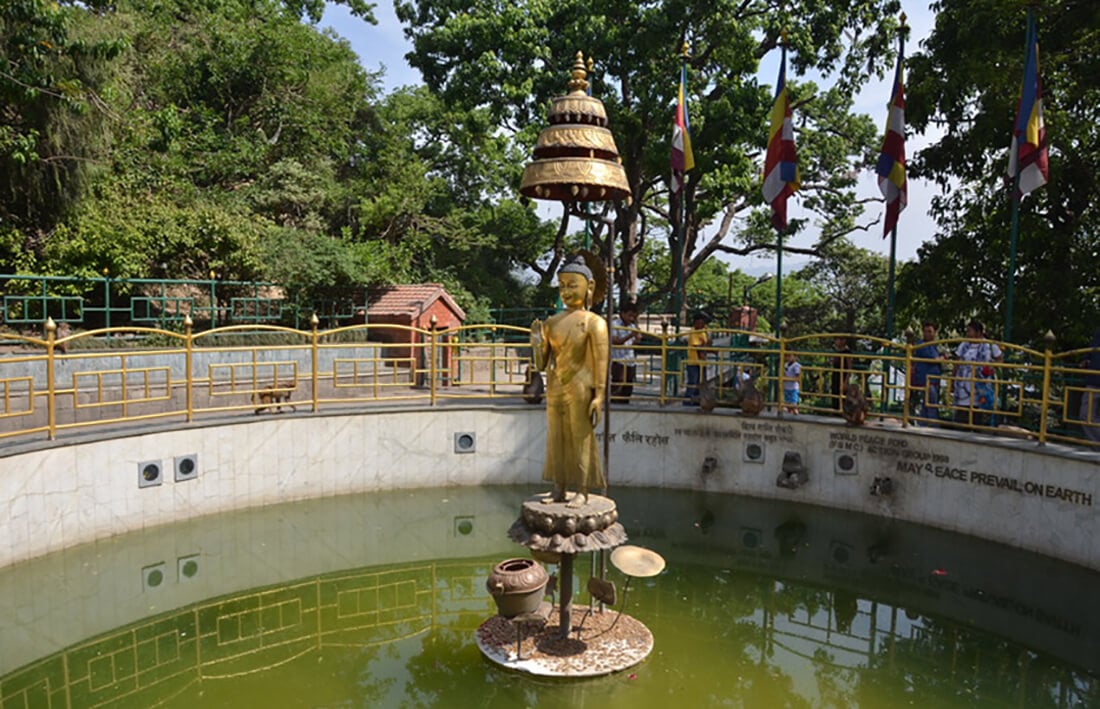 On the western side of Swayambhunath stupa is a beautiful pond named World Peace Pond. There is a statue of Buddha in the middle of the pond and small cauldron at the base.

An exciting thing here is about the coin and cauldron. (The vendors around the pond sells coins.) Buy coins from them and try flipping the coin into the cauldron. And if you, fortunately, do it, you are the luckiest - wish for something, and it will come true! That's what people believe.

How To Reach Swayambhunath Temple

Via taxi: You can hire taxi to reach swayambhunath, its 4km away from the city, Via Local Bus: local buses from sundhara,(ratnapark) leaves for swayambhunath frequently. 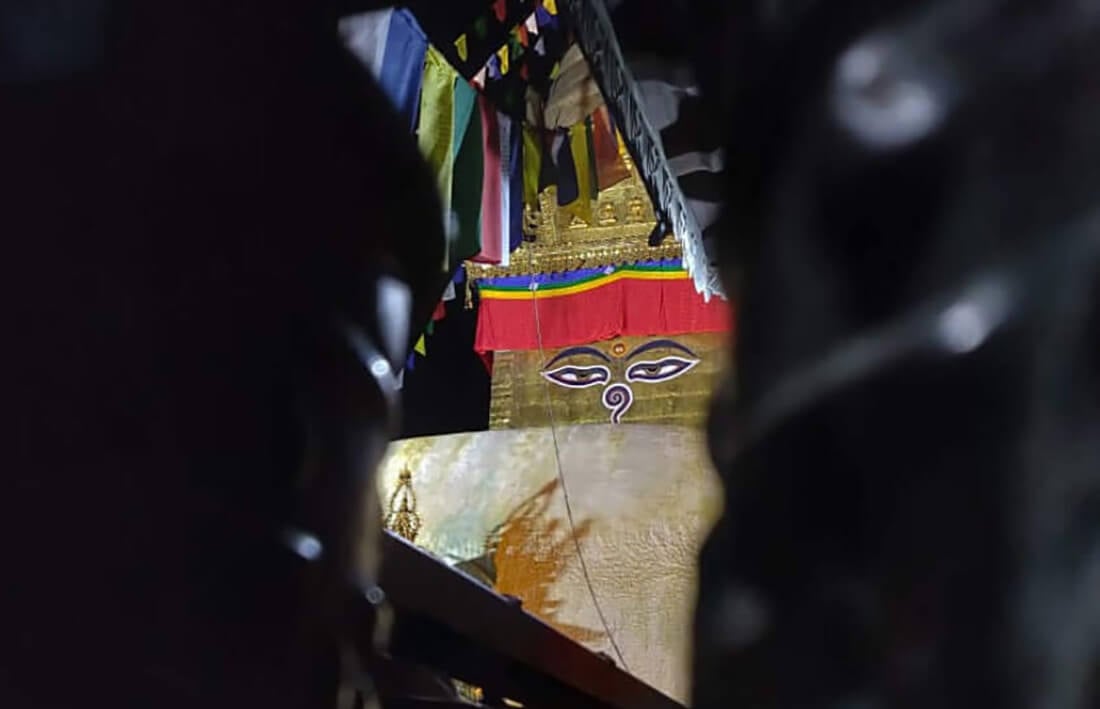 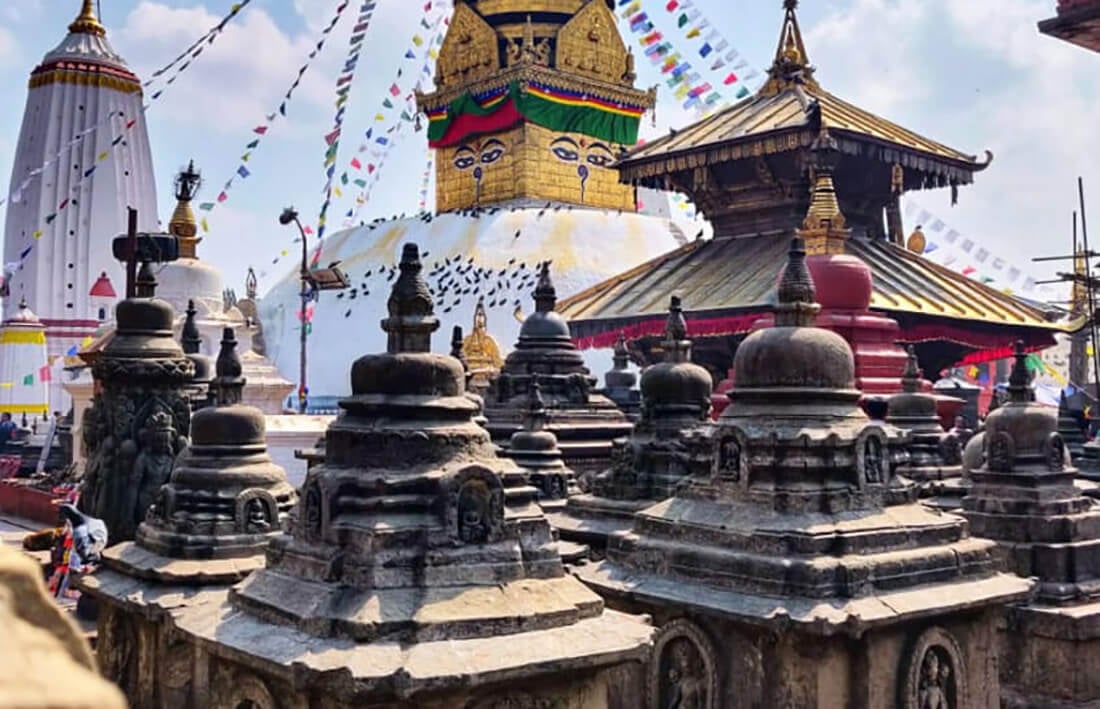 JH
Jaxon Hall | Tue Jan 4, 2022
Swayambhunath has always been my go-to place while in Kathmandu. But never got to know these facts. Thanks for the sum-up and all info.
Reply
CM
Cristian Mills | Sun Nov 21, 2021
This stupa at the top of the hill is definitely a must-visit place. I have been there like 10 times, and I still love to visit it everytime I get a chance to.
Reply
RH
Regina Harris | Thu May 20, 2021
Yes, this place is magical and beautiful. Everyone will fall for this place on their first visit. I have been to Monkey Temple twice and it is truly beautiful.
Reply
WN
Wojciech Nowak | Mon May 17, 2021
I liked peace pond and the story that it was self evolved. The Swyambhunath temple is truly significant to Buddhism. Wonderful peace of article.
Reply
CM
Calvin Mckinney | Tue May 11, 2021
I've been to Swayambhunath Stupa for as many time as I have been to Nepal. Not a single visit I miss. The view of Kathmandu from the stupa reminds me of the beauty of Nepal. I have been to the mountains, and the tarai region, but I love Kathmandu the most. I've also strolled around Thamel, and loved it. Glad to know about the facts of the stupa.
Reply
lU
lora Underwood | Wed Mar 10, 2021
This stupa on top of the Hill in Kathmandu is favorite place of mine. I've been there for like 10 times while I was in Nepal for my trek to Annapurna Base Camp. I loved the aura of this stupa, but never knew the facts about the stupa and after reading this blog, I have known alot about this stupa. I am grateful to the writer for unveiling the interesting facts.
Reply