Why is Everest Base Camp Trek Popular? 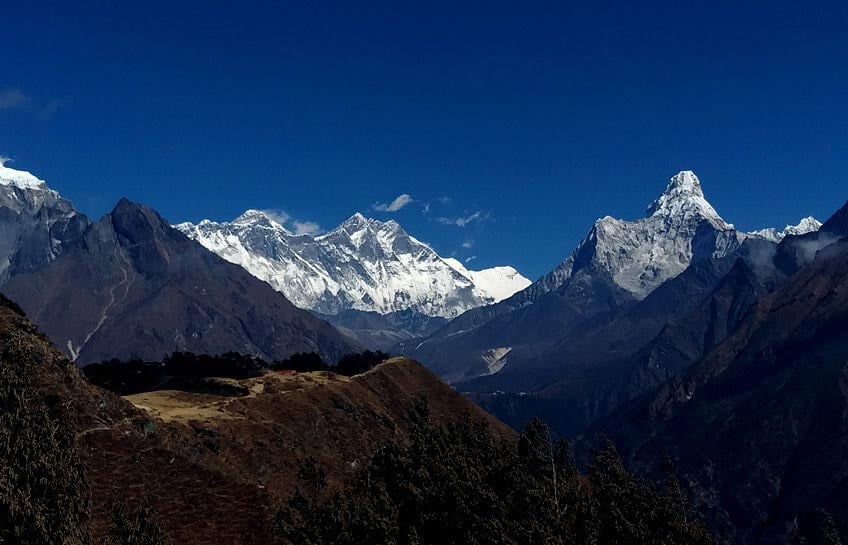 Everest base camp trek is predominantly the most popular trek in the world. The legendary trekking trail to the base camp of Everest is undoubtedly the most sought after trek. But the question is why? Why is Everest Base Camp Trek so popular? -The obvious answer is the sight of the mighty Everest and the base camp on the roof of the world. That's it! But wait. There's more. Apart from the hike to Everest Base Camp and sight of the highest mountain in the world, trekkers can indulge in Sherpa culture and lifestyle. It is truly amazing.

The trekking trail to Everest is full of prayer flags, prayer wheels and boulder inscribed with Buddhist mantra, few monasteries, a suspension bridge, and museum. Walk for all day long and sleep at local teahouses owned by local Sherpa and experience great hospitality and enticing lifestyle. The evening is all yours to enjoy a delicious meal and conversation with like-minded people.

Reasons Why Everest Base Camp Trek Is Admired

Ever since the first ascent of Mount Everest on 29 May 1953 by Edmund Hillary and Tenzing Norgay, climbing Everest or setting foot at the base camp of world's tallest mountain has been a dream adventure, otherwise lifetime experience. Thousands of travelers trek to Everest base camp every year and surprisingly even more as the year pass by. It rewards trekkers with a plethora of opportunities or say rewards to reminiscence for a lifetime. And here are Top 5 attractions of Everest Base Camp Trek 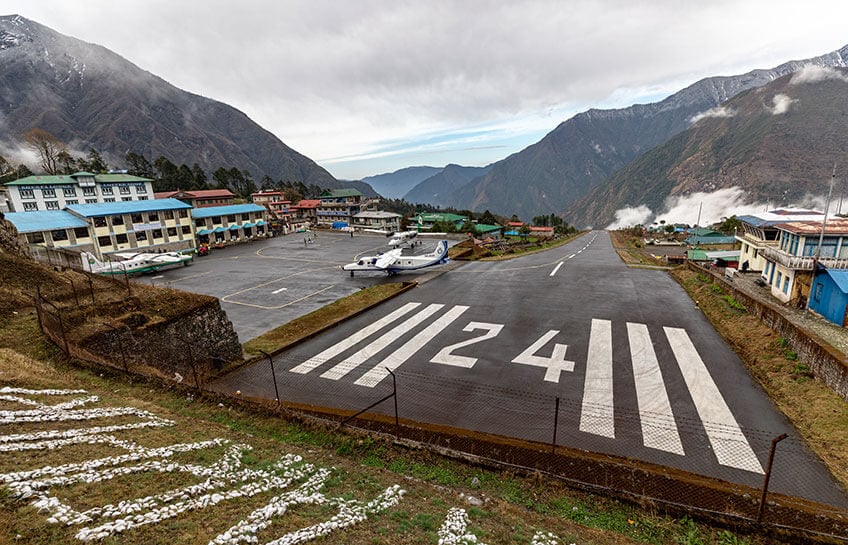 Lukla, a beautiful town in the Khumbu region of Nepal is the popular stop-point in Everest region. It is a Sherpa village full of small lodges and shops, also considered the starting point for Everest Base Camp Trek- the trek starts from Lukla. Lukla airport also known as Tenzing Hillary airport is an extremely small and busy airport in Nepal. The asphalt-paved-and-short runway is only 1,500 feet long and 65 feet wide. This infamous airport, perched in between mountains is quite famous and regarded as among the most dangerous airport in the world. Notwithstanding this, Lukla grants awe-inspiring views of mountains and enthralling flight. 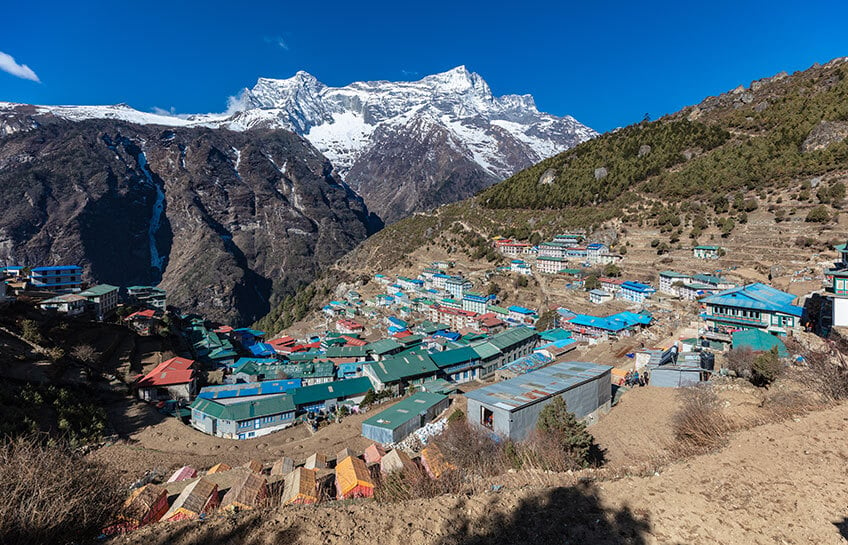 Namche Bazaar is the Gateway to Everest and popular tourist hub in Everest region. Perched at an elevation of 3,440m, shrouded by majestic mountains, Namche Bazaar is a colorful market-town full of shops, lodges, pub, and hotels. You can find here everything from artifacts to trekking to climbing gears and equipment. This place is hometown to Sherpa who is well-known for their praise-worthy mountaineering skill and adaptation to the high altitude. It is a popular stop-point for acclimatizing- stroll around villages like Thame, Khunde or visit Syanboche or simply enjoy your coffee at one of the hotels. 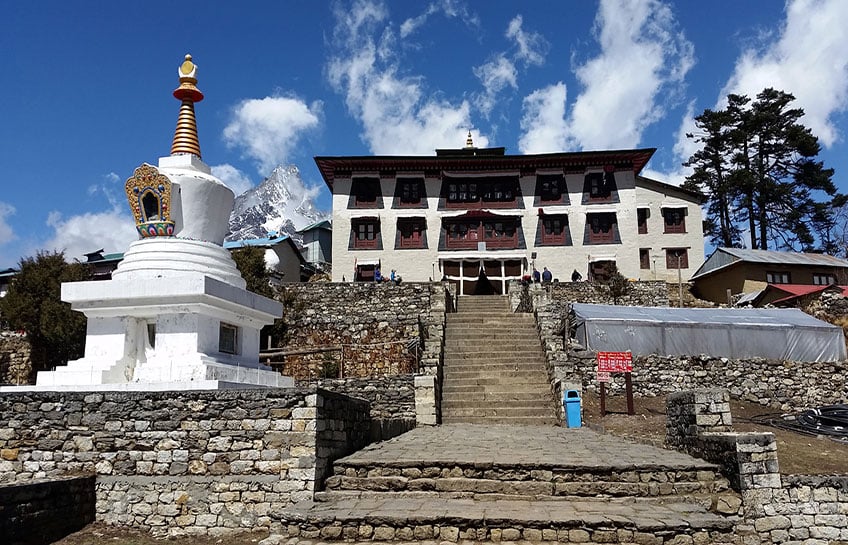 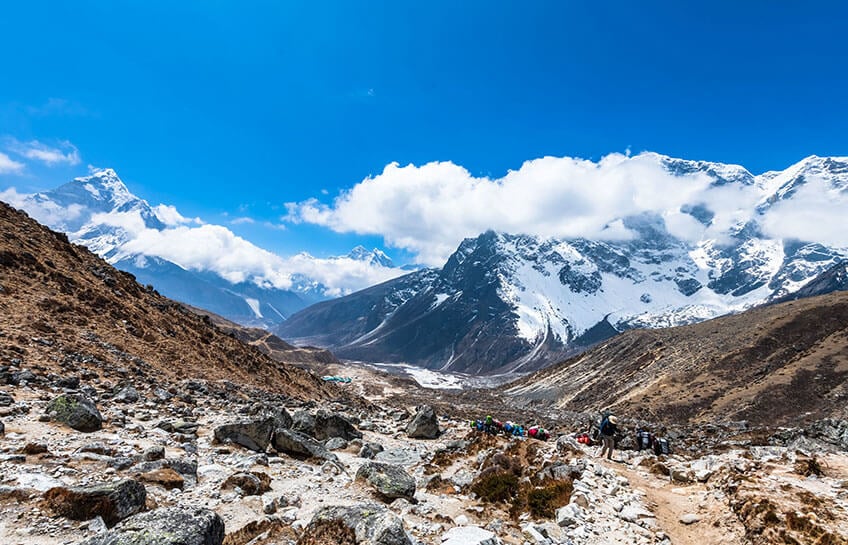 Sagarmatha National Park is the first national park of Nepal enlisted in UNESCO world heritage sites: it is one of ten UNESCO world heritage sites of Nepal. It is enclosed in an area of 1,148 km square at an elevation ranging from 2,845 to 8,848 m and houses some of the endangered faunas like Himalayan monal, blood pheasant, red-billed chough, musk deer, snow leopard, Himalayan black bear, red panda, and several other. It is inhabited by more than 118 species of birds in the lush juniper and rhododendron forest. 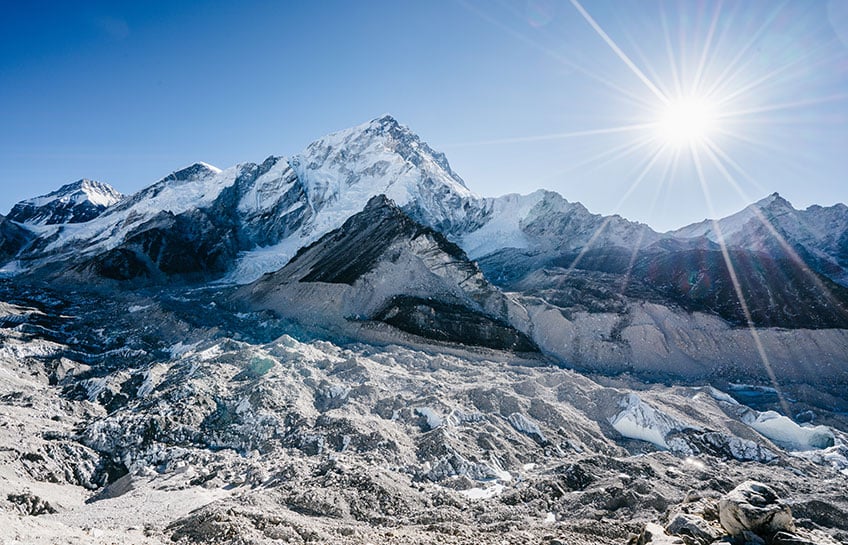 The base camp of the highest mountain in the world has its own grandiosity and glory. Soaring at an altitude of more than 5000m, Everest Base Camp is an ultimate destination of thousands of trekkers every year. A sense of accomplishment on reaching the base camp of Everest is second to none. One has to walk for weeks dealing with altitude and weather and this is an adventure in itself. It rewards astounding views of mountains like Mt. Everest, Lhotse, Nuptse, Pumori including Khumbu glacier.

Now Let's Dive Into Itinerary For Trekking To Everest Base Camp

Your trekking in Nepal commences from Kathmandu, the capital city, also known as the "City of Temples". Kathmandu has its own charm and chaos- the hustling and bustling city is full of magic and mantras. For your Everest base camp trekking, you will have to fly to Lukla from Kathmandu. The weather is the crux of flight operation to Lukla. Oftentimes many travelers have to deal with it (the unpredictable weather of the Himalayas.) But the promising part is a thrilling flight to Lukla with imposing vista of the majestic mountains. The trek begins right from Lukla heading to Namche, Tengboche, Dingboche, Gorak Shep and finally Everest Base Camp. Here is the day-to-day itinerary for Everest Base Camp Trek: (We've considered standard itinerary of one of our products- Hike to Everest Base Camp and Kala Patthar)

On your first day, you will be arriving in Kathmandu, Nepal. You will prepare for your trek, staying at one of the hotels in Kathmandu. Maybe stroll around if you've spare time.

Enjoy your enthralling flight (30 to 45 minutes) to Lukla. The awe-inspiring views of mountains parallel to the airplane are absolutely amazing. Make sure to sit on the left side of the plane, when flying from Kathmandu to Lukla and right side when flying back to Kathmandu. Your trek begins here: head toward Phakding. It is a short hike, you will reach Phakding in about 3 to 4 hours.

Your next stop is Namche Bazaar, the Sherpa Capital. Like we mentioned earlier, Namche Bazaar is the central hub in the Khumbu region. Cross many suspension bridges, including the highest of them all the Hillary Bridge, through forests of pine and rhododendron.

Namche Bazaar is the Gateway to Everest, the hometown of Sherpa. Take an acclimatization hike to Hotel Everest View and Khumjung Village or enjoy coffee with views of Himalayan giants like Thamserku, Kantega and Ama Dablam.

Today you have to trek for 5-6 hours to reach Tengboche, home to famous Tengboche Monastery- the largest Buddhist monastery in Khumbu region. Tengboche is a beautiful village flaunting the beautiful backdrop of Ama Dablam.

March forward to Dingboche, a Sherpa village at an altitude of 4,410 meters. It is a popular stop for trekkers with few lodges. You will have to spend the next day in Dingboche for acclimatization day.

Today is an acclimatization day. You will spend one more night in Dingboche for further trekking to Everest Base Camp. Acclimatization day helps you adapt to altitude and overcoming health hazards at higher altitude.

Take the trail to Lobuche. Lobuche at an elevation of 4,940 meters is a small settlement and a popular stop en route to Everest Base Camp. Walk past Thukla and Thukla Pass. Lobuche welcomes hundreds of trekkers during the trekking season.

Day 9: Trek to Everest Base Camp

The day has finally come- today is the day you've waited for so long to come, a dream-day. You will be breathing above 5000m, sounds insane! The incredible view from Everest base camp is something to marvel at. This is your moment!

Day 10: Hike to Kala Patthar and trek to Pheriche

You will reach Kala Patthar on 10th day of the trek. Kala Patthar is a vantage viewpoint for panoramic views of the Himalayas including the mighty Everest. From here you can enjoy 360-degree views of some of the highest peaks in the world- Mount Everest, Pumori, Nuptse, Lhotse, etc. And descend to Pheriche for an overnight stay.

Today you will return to Namche. Follow an up and down trail to Namche. Trek through beautiful and dramatic landscape with the constant backdrop of the Himalayas. After a few hours and a tiresome day, enjoy a scrumptious meal at one of the hotels in Namche.

This is the final leg of your EBC adventure. Descend to Lukla crossing many suspension bridges en route. Make your last night in the mountains memorable with the Sherpas. Get some pictures of Sherpa, the town itself and the lofty Himalayas.

Return to the capital city, Kathmandu. Enjoy farewell dinner. You will have ample time to explore the city, especially Thamel, the backpacker's paradise. Or simply rest at the hotel. You will probably like the idea of buying some souvenir for your loved one.

Goodbye Nepal! You will return to your home.

By now, you have pretty good knowledge on the itinerary part and attractions of Everest base camp trek. And we would like to assume that you have a clear idea on the reason behind the popularity of Everest base camp trek, making it the most demanded trek in the world. History says it all. There's more to what you expect or anticipate. Everest base camp trek has a lot to offer you but consider trekking in preferred season. The best season is spring (March-May) and autumn (September – November). Embark on this adventure and you can surely get an opportunity to brag about to your friends. Something like "I have conquered the height over 5000m and set my foot on the base camp of world's tallest mountain."

JN
Jack Nilsen | Sat May 15, 2021
I have heard there are multiple ways to do the Everest Base Camp Treks and those several route has its own specialty.
Reply

Writer, Secretly Philanthropist and Wanderer-these three words elucidate Puskar Rai. A bad programmer turned writer, Puskar loves traveling and reading books of his interest. Puskar Rai is a blogger and writer at Third Rock Adventures. His sheer passion for writing and obsession with traveling got him into the tourism industry.

How to obtain Kanchenjunga Trek Permit?

How Far is Everest Base Camp from Kathmandu and How to Get There?

How Many Days Do You Need to Visit Everest Base Camp?

When is the best time to visit Everest Base Camp?