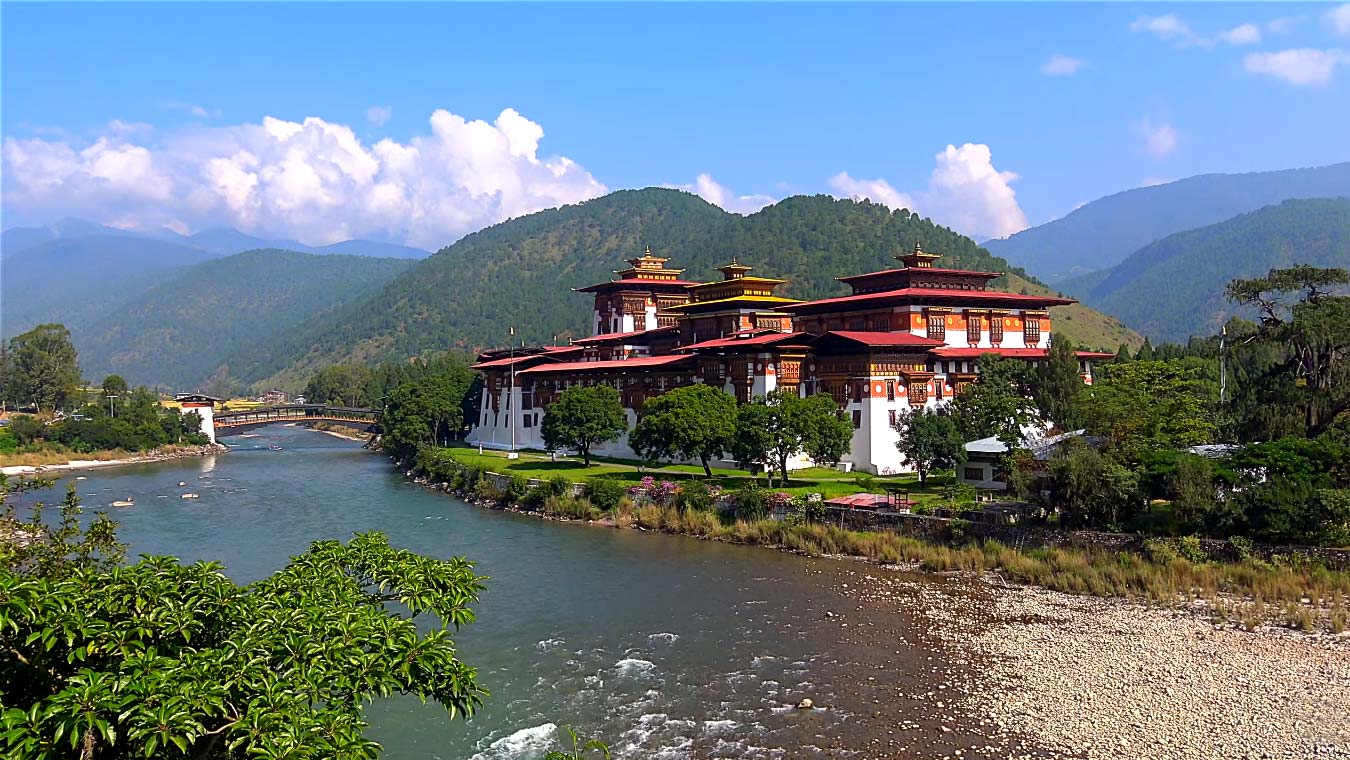 Endless stretches of forest, Happy People and a culture where Buddhism is a way of life. Experience Bhutan, the Land of Smiles…

Visit Bhutan, the ‘Land of the Thunder Dragon’. A Himalayan kingdom nestled deep amidst the high Himalayan mountains is a unique destination. Isolated from the outside world for centuries, this fascinating country was once known as Shangri La, the hidden kingdom.

Take a journey to this mystical country and experience a rich and vibrant Vajrayana Buddhist culture. Observe the unique native customs and traditions. Step into centuries old sacred Buddhist monasteries and interact with the learned monks. Enter the lush jungles and explore the wildlife. Hike to monasteries built atop ridges and cliff sides. Take part in monastic festivals and dance with the masked dancers. Walk along the decorated corridors of old palaces and gaze at verdant valleys from ancient fortresses built by Bhutanese kings. Share a meal with a farming family and discover what makes Bhutan the country with the highest ‘gross happiness index’.

The ideal seasons to travel to Bhutan are Spring and Autumn, because during these seasons one can indulge in a variety of activities (trekking, hiking, rafting, mountain biking etc). But one can visit Bhutan anytime of the year. It all depends on the kind of activity you want to enjoy and the places you want to visit. One can take a cultural to the major cities anytime of the year. Wildlife safaris and nature tours in Southern Bhutan are popular during Winter, a season which does not see much tourist traffic in the rest of the country.

Things to do in Bhutan

As more than 70% of Bhutan’s landscape is covered with forests, this is the ideal destination to connect with nature. The ancient palaces, Buddhist monasteries and dzongs (traditional citadels) offer a unique cultural experience. The roads and rough gravel tracks connecting small towns and cities and winding across high mountain passes and pine woods are ideal for mountain biking and motorbike adventures. The verdant woods covering the hills and valleys are home to rare Himalayan flora and fauna. Take a nature or bird watching tour. Trek or hike through the trails used by nomads and yak herders. Witness the vibrant Bhutanese monastic festivals. Watch the monks perform colourful Cham dances and participate in Buddhist rituals.

How many days are sufficient to visit Bhutan?

How to enter Bhutan?

By Air: Paro International Airport is the only international airport in Bhutan. Lying at an altitude of 2225m/7300ft, this picturesque airport lies in a valley surrounded by high mountains. As it takes a lot of skill to maneuver the aircraft between the mountains and land at the narrow runway, only a handful of experienced pilots are allowed to fly into Bhutan. International flights to Bhutan are operated by only two airlines company, Druk Air (Bhutan’s national carrier) and Bhutan airlines.

One can fly to Bhutan from these cities – Kathmandu (Nepal), Bangkok (Thailand), Changi(Singapore),Dhaka (Bangladesh) and the Indian cities of Mumbai, Kolkata, Guwahati, Bagdogra and Gaya.

While no visa is required from citizens of India, Maldives and Bangladesh, all other nationalities need to obtain a visa for Bhutan. Please do note Bhutanese Government has made it mandatory for all tourists to book a tour with a registered tour operator. The tour operator with whom you book your Bhutan Tour will handle all the visa procedures and obtain your visa for you. You need to send the photocopy of your passport to your tour operator, who will then apply for your visa. Your passport should have a validity of at least six months. The full payment of your Bhutan holiday, including your visa fee, must be made to obtain your Bhutan visa from the tourism council of Bhutan.

The main Bhutanese cities- Paro, Thimphu, Punakaha and Phobjika- are connected by a network of well-maintained pitched highways. Locals use buses and shared taxis to commute. In rural areas, it is not uncommon to see locals still using horses and ponies as modes of transportation. As a tourist, you will be driven around in a comfortable private vehicle (car, land cruiser or mini-van as per the number of travellers).

Bhutan is a landlocked country wedged between the Tibet Autonomous Region of China and India. Lying in South Asia, it is one of the world’s smallest countries in the world. The country is flanked by the mountain ranges of the Eastern Himalayas. The total land surface area is 46,500 square kilometres. From east to west it stretches to a distance of 300km and from north to south, 150km. Bhutan lies between the longitudes 89°E and 93°E, and latitudes 27°N and 29°N. Its highest point is Gangher Puensum (7570m), the highest peak in Bhutan and the highest unclimbed Himalayan peak in the world. Its lowest point is Drangme Chhu (also known as Manas River) at 97m.

Climate in Bhutan ranges from semi-tropical to alpine. North Bhutan, which is entirely covered with high Himalayan peaks, is the coldest. Southern Bhutan, which has the lowest altitude, remains hotter and humid than the rest of the country. Central, Western and Eastern Bhutan has a temperate climate, warm in summer and cold (including snowfall) in winter. Spring is dry and arid. Bhutan receives Monsoon rains during the summer months. There is heavy rainfall and thunderstorms in most parts of the country. Though the weather clears as Autumn approaches, there maybe  stray showers at few places.  During winter, gale-force winds and thunder hit the high mountain passes and highlands of Bhutan. This is the reason why the locals call Bhutan ‘Druk Yul’, the Land of the Thunder Dragon.  There is snowfall and temperatures hover around the freezing point in the cities of Paro and Thimphu.

Spring and autumn are the ideal seasons. The weather remains pleasant and the skies are clear. In spring, the days are sunny and warm and nights a bit cool. The hills and the valleys are filled with new spring blossoms – rhododendrons, orchids, cherry blooms and blue poppies (Bhutan’s national flower).  During autumn, the weather clears up after the summer rains and the days are bright and sunny. Summer and winter are regarded as off-seasons.  While there is heavy rainfall during the summer months, making it difficult to travel across Bhutan, winter is characterized by strong gale-force winds, thunder and snowfall.  But the upside of taking a Bhutan Tour during the off-seasons is, there will no crowds at the popular sites and you will get to enjoy off-season discounts. If you are planning a trip to Bhutan, you can learn more about the best time to visit Bhutan.

Bhutan is the only country that gives more importance to its ‘Gross National Happiness’ than ‘Gross National Income’. For the Bhutanese Government, the happiness and contentment of its citizens is more important than material progress. Much of what the government earns from tourist taxes are funneled into developmental projects. Deeply spiritual, Bhutanese religiously follow the tenets of Buddhism.

Bhutan is the only country in the world where Vajrayana Buddhism is still actively followed. They consider their mountains as guardian deities and the mountain lakes and cliffs as sacred abodes of Buddhist gods. Many tourists are amused or aghast at the widespread use of ‘phallic’ symbols as good luck charm. Though their country is one of the smallest in the world, the Bhutanese take pride in their culture and nation. Simple, honest, laidback, friendly and with a quirky sense of humor, the Bhutanese are some of the most content souls in the world.

Bhutan has different ethnic groups living in its soil. The Sharchops, an ethnic community living in the eastern part of Bhutan, are believed to be the earliest inhabitants of Bhutan. In West Bhutan live Ngalongs, the descendants of early Tibetan settlers. Southern Bhutan is home to Lhotsampas, people who migrated from Nepal during the nineteenth century. Other indigenous tribes living in Bhutan are Lhopu, Lepcha, Brokpa, Dhakpa, Doya and  Layap.

The national language of Bhutan is ‘Dzonkha’. Other dialects which are widely spoken include Lepcha,  Sharchop and Nepali. English is the medium of instruction in most educational institutions. The tour guides in Bhutan can communicate in English and a host of other languages – French, German, Hindi, Spanish, Japanese, Korean, Chinese etc.

Ngultrum (NU) is Bhutan’s official currency. When you arrive in Bhutan, you can exchange your money at Paro International Airport’s money exchange counters. The Bank of Bhutan do accept foreign currencies (US Dollar, Pound Sterling, Euro, Swiss Franc, Canadian Dollar, Indian Rupee, Australian Dollar, Japanese Yen etc.) as well as travelers’ cheques. ATM facilities are available only in the major cities.  You should carry enough local Ngultrum when traveling out of the main cities. While hotels and handicraft stores in Thimphu and Paro may accept credit cards, business establishments in other parts of the country may not have credit card payment facility.

Please do note that while shopping for items or exchanging currency you will be given receipts. You should hold on to these receipts as you may need to show the same while leaving the country. If you have bought antique items, the customs officials may ask you for the receipt of purchase at the customs checkpoint. Receipt of foreign exchange, which is given while exchanging currency on your arrival, are needed if you want to exchangethe local currency to USD or your country's currency when leaving the country.

While visiting Bhutanese towns and cities, don’t forget to visit the lively local markets. These local markets are usually economic hubs and see the largest concentration of local entrepreneurs trying to sell their products.   At these markets, one can find food items and organic produce.  Farmers and small-scale entrepreneurs from the rural areas sell different varieties of mushroom, handicraft items, ethnic jewelry, cheese, honey, meat, vegetables, fruits, incense and a variety of other goods.

Please do note the sale of tobacco and cigarettes are banned in Bhutan. If you are a smoker, you are allowed to bring with you 200 sticks of cigarettes or 30 pieces of cigars when you enter Bhutan. You will have to pay customs duty and sales tax for these items.