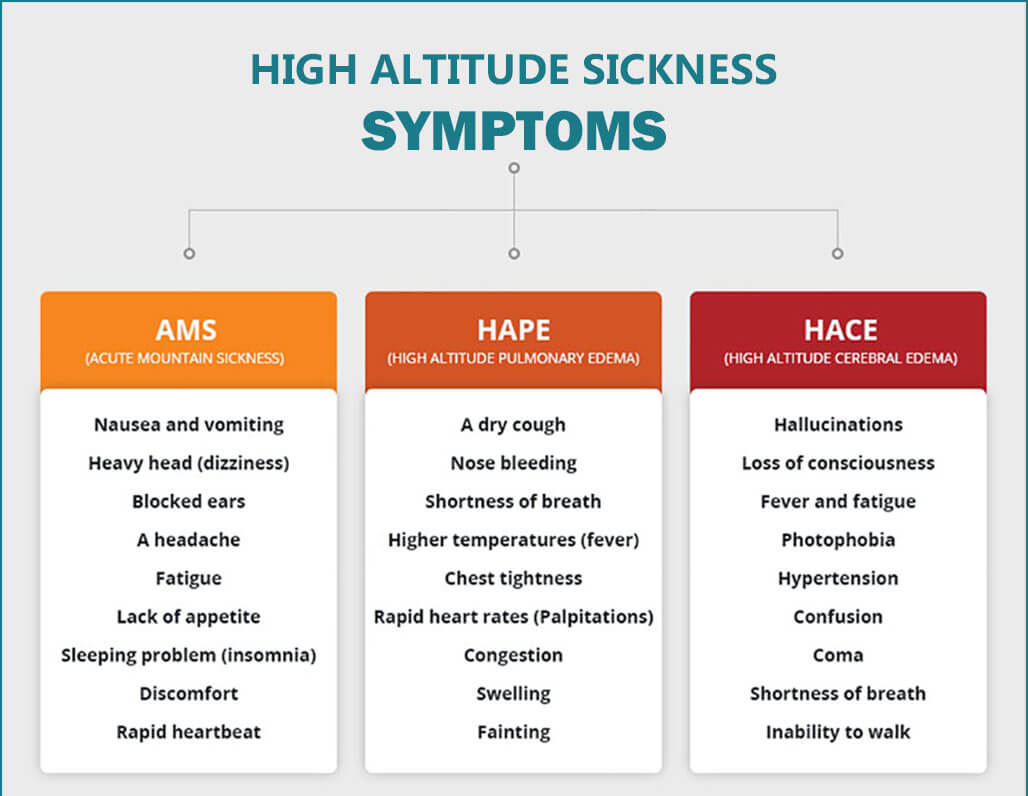 Altitude Sickness commonly occurs if you ascend too high and too fast. The golden rule with high mountain trekking is to go SLOWLY and never ascend too high, too fast. You should also allow an acclimatisation day for every 1000m of height gain.

In this article, we look at the what, how and why of altitude-related illnesses and how you can avoid it. We also look more generally at other potential health problems a trekker in Nepal might face.

How Does Altitude Sickness Occur And What Is It?

By far the biggest threat to anyone trekking the higher (above around 3000m+) routes in Nepal is Acute Mountain Sickness, otherwise known AMS or altitude sickness. This potentially fatal condition is caused by a combination of reduced oxygen and lower atmospheric pressure reacting with the body.

Almost everyone who treks above 3000m will get very mild symptoms such as light dizziness or headache and difficulty sleeping. Other signs of altitude sickness include lethargy, nausea, breathlessness and loss of appetite. Difficulty sleeping is also another sign, though many people suffer from this even if they don’t have any of the other symptoms.

Normally mild altitude sickness only lasts for a short time and is more a sign of your body adapting to the lower oxygen levels at altitude. If you develop these mild symptoms then you should rest and drink lots of water or ginger tea and it should pass fairly quickly. If symptoms persist or get worse and a strong headache and vomiting start to occur then it’s likely that moderate or severe altitude sickness is striking. This is much more serious and the best thing to do is descend to a lower elevation as fast as possible – even if it’s the middle of the night.

Normally you don’t have to descend very far (just a few hundred meters elevation loss should be enough to help) for the symptoms to start clearing up.  You might need to hire a porter to help carry the victim quickly down the mountain. Ignoring AMS can quickly lead to severe problems and even death.

When a person gets a very severe case of altitude sickness an accumulation of fluid builds up in the lungs. This is known as high altitude pulmonary edema or HAPE (or HACE if it affects the brain rather than the lungs). Symptoms include breathlessness even when the victim is resting, coughing, severe headaches, lack of coordination, irrational behavior and severe vomiting. If you suspect someone is suffering from very severe altitude sickness get them to walk in a straight line while putting the heel of the front foot against the toe of the back foot. If the person cannot walk in a straight line or stumbles and falls then they are suffering from HACE.

If a person is breathless when sat still (give it ten minutes if you’ve just been climbing uphill) then they are developing HAPE. In either case the next course of action is the same. Get down that mountain and get down it immediately and quickly. The sick person is likely only a couple of hours from falling unconscious.

There’s no rhyme or reason with how AMS strikes. We have spoken to a Sherpa who has summited Everest a number of times without problem, but once got severe AMS at just 3500m. And it doesn’t necessarily strike the old or unfit first. In fact, there is some evidence to suggest that young people get it easier than older people.

How To Avoid Altitude Sickness When Trekking In Nepal 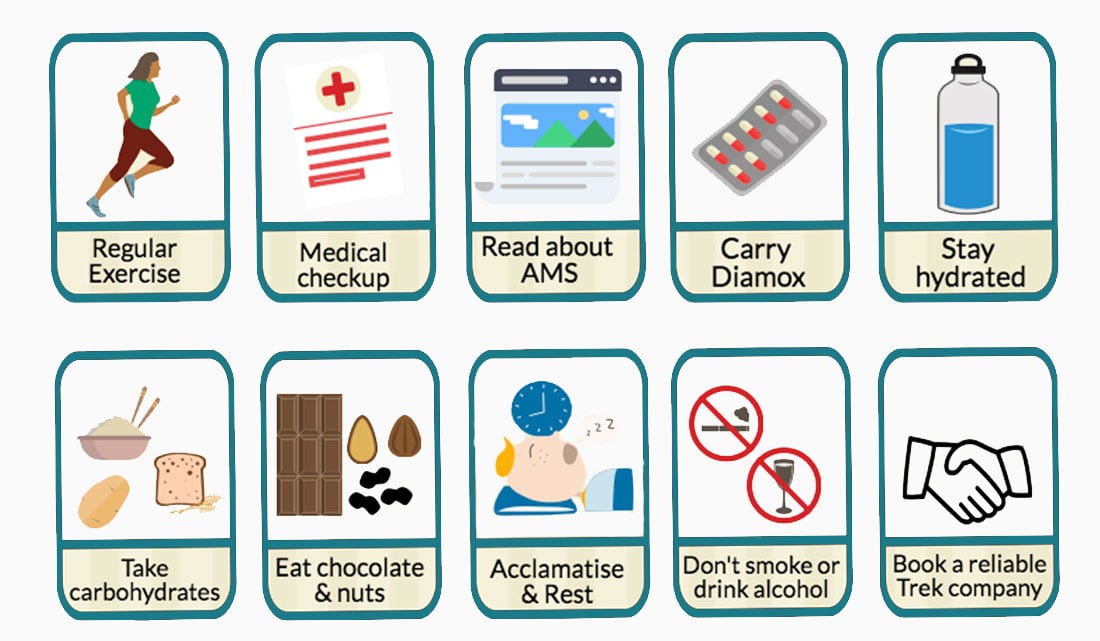 Altitude Sickness commonly occurs if you ascend too high and too fast. The golden rule with high mountain trekking is to go SLOWLY and never ascend too high, too fast. Above 3000m most experts agree that you shouldn’t ascend more than around 300-500m in a day. You should also allow an acclimatisation day for every 1000m of height gain (a rest day doesn’t actually mean having a rest.

On these days it’s wise to hike to a higher altitude and then descend back down again to sleep). The huge majority of treks in Nepal are designed so that you don’t ascend too fast, but there are one or two exceptions (the routes to the Gosainkund Lakes in the Langtang region and the Makalu Base Camp trek are both notorious problem areas for altitude sickness) where daily height gain is greater than recommended.

If you do start to feel altitude sickness related symptoms coming on while trekking in Nepal don’t ignore them. If you’re trekking in a group there can be a tendency to try and hide your symptoms and push on so as not to slow down the group as a whole. Doing so could cost you your life (and this will slow the group down even more!). Tell your trekking partners that you’re feeling sick immediately.

Although many trekkers in Nepal are fearful of altitude sickness by following the simple rules outlined above you will greatly reduce the risk of problems.

Some travellers to Nepal bring Diamox (acetazolamide) medication with them. This can be used to prevent and treat altitude sickness and could be useful if you are only going to be altitude for day or so and simply have no time to acclimatise properly. However, for general trekking usage in Nepal we do not recommend taking medications as an alternative to ascending slowly and carefully. Taking such drugs can lead to a false sense of security which could lead to serious problems if you’re up high for any length of time.

Other Health Issues While Trekking In Nepal

Although altitude sickness is the health issues most feared by walkers in Nepal there are a few other potential dangers.

Hypothermia is not as common as you might expect on a trek in Nepal, but it’s certainly a risk for the under dressed and unprepared. Symptoms are pretty similar to those of AMS with slurred speech, loss of concentration and fatigue all being key signs. Get the victim into a warm place (wrap them in sleeping bags and use your own body heat if necessary) and give them hot drinks and food.

Sunstroke and heat stroke are both common. In fact, to the surprise of many potential trekkers they are actually more common than hypothermia.  This is especially the case when walking all day in bright sunlight through the hotter, lower valleys and slopes. At such times try to rest in the shade, drink lots of water (aim for at least 3 litres per day), eat something salty and wear a wide-brimmed hat and sunglasses at all times.

Although hardly life threating blisters are a problem you can do without on a Nepalese trek and a bad dose of blisters can essentially ruin your trek or even stop you continuing altogether. Blisters are normally caused by wearing ill-fitting boots or ones that you haven’t broken in properly before setting out on the mountain trails. Always buy the best quality boots you can afford from a dedicated trekking shop and always break them in before arriving in Nepal by wearing them on walks close to your home. Doing so helps loosen up the material and moulds them to your feet better. Some people rent boots from trekking shops in Kathmandu or Pokhara. We strongly advise against this. Almost inevitably the boots won’t fit properly or strange lumps and bumps inside them will lead to blisters.

Dedicated trekking socks can help prevent blisters. It’s also worth bringing a roll of Second Skin which is like a sticking plaster that you place over any sore patches on your foot. The material eventually seems to mould in with your skin and prevents blisters forming.

Food poisoning and other tummy troubles aren’t as big an issue up in the hills and mountains as they are in Kathmandu, Pokhara and the Terai lowlands (be careful what you eat in these areas before going on a trek. The last thing you want to have do is set out walking with a dodgy stomach). Even so you should still choose your food carefully. It’s best to stick to simple vegetarian food such as dhal bhat, momos or fried noodles. Bring anti- diarrhoea tablets with you when you trek just in case. 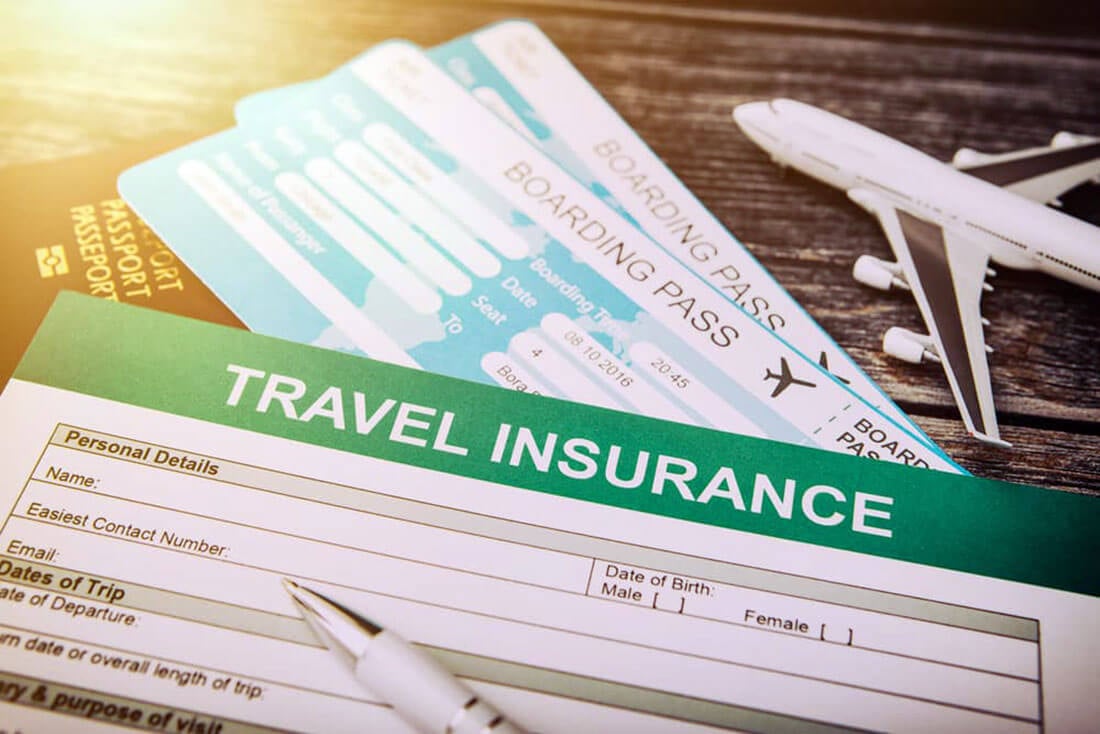 Perhaps the most important health precaution you can take while trekking in Nepal is to purchase a good travel health insurance plan before leaving your home country. Read the small print of any policy carefully before buying it. Many insurance policies (including some policies issued by well-known ‘adventure’ travel insurance firms) do not cover trekking above 2500-3500m which makes them useless for many Nepalese treks. It’s also important to check that your policy covers helicopter evacuation from the mountains.

Finally, double check that any policy you might buy does actually cover Nepal. Sadly, due to the high number of cases of insurance scams and general corruption within the Nepalese trekking and medical industry, a growing number of international travel insurance companies are simply refusing to insure anyone travelling to Nepal for any reason. And finally, if you’re presented with the opportunity to partake in one of these scams then you should report the company offering it to the Nepalese Tourist Board in Kathmandu. Agreeing to be a part of such a scam is a criminal offence, diverts precious resources away from where they are really needed and makes it much harder for other travellers to obtain insurance for Nepal in the future. It also marks you out as a selfish idiot!