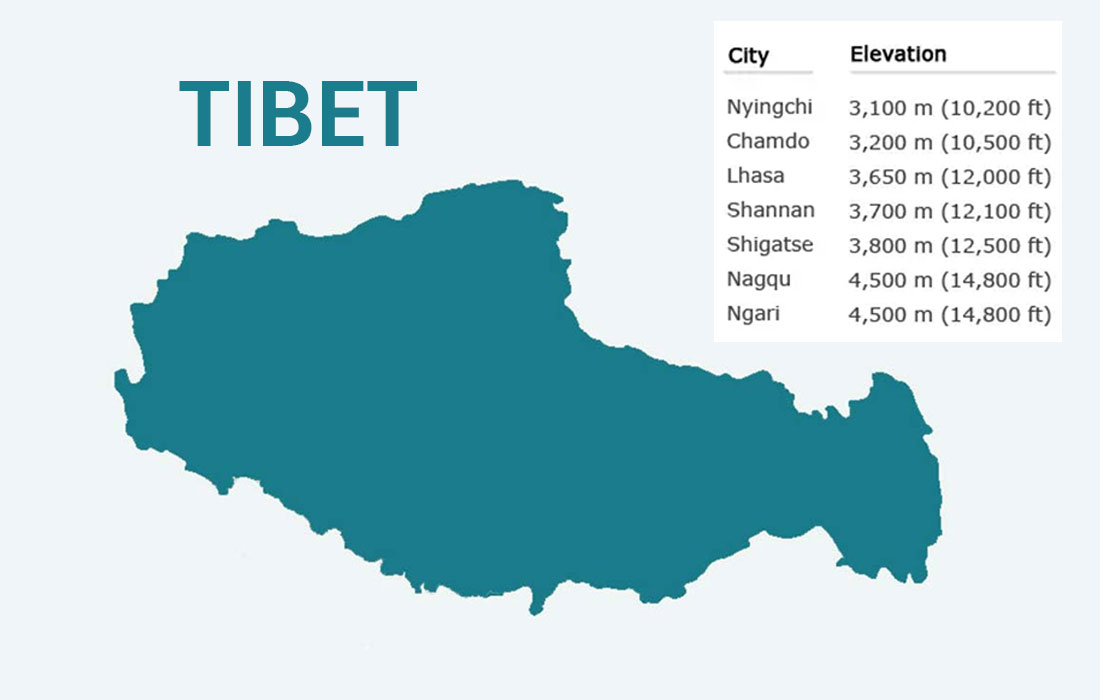 The Best time to visit Tibet or Tibet tourism season is from April to October. But the best time for Tibet travel largely depends on where you want to go and the kind of experience you want to enjoy. If you are only visiting Lhasa, then you can schedule your visit anytime of the year. Though it may be freezing during winter, you can avoid the usual crowd and enjoy off-season discounts. If your aim is to trek to Everest Base Camp or take a pilgrimage tour to Mount Kailash then you can schedule your visit anytime between April to May or from September to October.

Tibet, known as the Roof of the World is the highest country in the world. With an average altitude of 4000metres, the Tibetan plateau is covered with snow-clad Himalayan mountains, arid hills, wind-swept valleys and jewel-like high altitude lakes.

There’s not much greenery around and the landscape remains bare and barren most of the time of the year.  While the northern part of the Tibet Autonomous Region is much colder compared to the rest of the region, the eastern part of the plateau receives the monsoon rains.

Located high up in the Himalayas, the Tibetan plateau experiences a long and cold winter. Summer is regarded as the beat season to travel to Tibet as it is much warmer and sunnier during this time.

The climate in the highlands is characterized by cold and dry winds, strong sunshine and a huge difference in day and night temperatures. Because of its high elevation, the air in Tibet is thin and there is less oxygen in the atmosphere.

During the spring season the snow melts and authorities open up most of trekking trails and highways which they close during the winter months. This is high season for trekkers and mountaineers, as the weather remains warm and agreeable. The skies clear up and offer unobstructed views of the high Himalayan peaks.

Most the tourists prefer to take an overland tour to Everest Base Camp, located at the foot of Mount Everest’s north face at this time of the year. You can also take a cultural tour to the major cities of Tibet – Lhasa, Shigatse, Gyantse, Nagqu, Chamdo and Tsetang.

During summer the weather remains balmy and cool. As there is more oxygen content in the atmosphere, summer is the busiest tourist season in Tibet. There is rainfall, but usually it rains only in the evening. This is the ideal season to take a cultural tour and visit the ancient Tibetan monasteries and traditional villages.

In Lhasa you can explore the cultural highlights of the city- Potala Palace, Norbulingka, Barkhor Square, Jokhang Temple, Ganden Monastery, Sera Monastery and Drepung Monastery.  You can also take short excursions to Yamdrok Tso Lake and hike to Dra Yerpa Cave. You can take an overland tour and visit ancient Tibetan cities like Tsetang (known as the cradle of Tibetan civilization), Shigatse, Ganden etc.

You can also travel across to Ngari Prefecture and visit Mount Kailash, a holy pilgrimage site for followers of Hinduism, Buddhism, Jainism and Bon (an ancient religion that was prevalent in Tibet before the advent of Buddhism).

Some of the important summer festivals are Saga Dawa, Shoton, Gyantse Horse Racing Festival and Tashilhunpo Tangkha Festival. Saga Dawa is a month-long festival and is celebrated all over Tibet. But according to Tibetans, the most sacred place to observe this festival is at Tarboche, located at the foot of Mount Kailash. Shoton or Yoghurt Eating Festival is held at Lhasa’s Drepung and Sera Monasteries.

During this festival, the monks end their month-long meditation by eating yogurt. Large thangkas decorated with Lord Buddha’s images are unfurled and Tibetan operas and masked dances are held. During Gyantse Horse Racing Festival the nomadic horsemen come with their horses to take part in the race. There are also archery competitions and yak races. Tashilhunpo Tangkha Festival is held in the ancient Buddhist monastery of Tashilhunpo in Shigatse. The monastery is the holy seat of the Panchen Lama, Tibet’s religious leader who is instrumental in choosing the Dalai Lama.

Autumn or fall is one of the peak tourist seasons. There is no precipitation. The days are warm and nights cold. Autumn is harvesting season and the farmlands are covered with golden patches filled with ripened barley. This is the right season to take a photographic tour as the whole landscape is covered in autumnal hues.

Autumn is also the best season for trekking, hiking and mountaineering. You can hike up to the north face of EBC from Rongbuk Monastery. Mount Everest, the tallest mountain in the world, appears very close to the highway that leads to Rongbuk Monastery, the highest Buddhist monastery in the world.  You can also explore Tibetan villages and cities. Take a trip to the holy Mount Kailash and Lake Mansarover.

During the festival, people go to rivers and lakes and take bath. This is regarded as ritual cleansing and people believe that by taking bath during this time they let go of their negative emotions like greed, jealousy, ego and lust. The harvest festival is held to offer prayers for a good harvest. Nagqu Horse Racing Festival is held in Nagqu. Horse men come from all over Tibet to take part in the race and show off their horses. Archery competitions and wrestling matches are held.

Winter in Tibet is very harsh and cold. Temperatures reach below the freezing point and there is heavy snowfall at most of the places. The highways are blocked by snow and the roads turn slippery with ice. Owing to avalanches and heavy snowfall, the authorities bar travelers from visiting most parts of Tibet during this season.

But Lhasa remains open for visitors and one can visit this city at this time of the year too. For budget tourists, this is the ideal time as they get to enjoy discounts on flights and hotels. As most of the visitors prefer to stay away during this particular time of the year, the city will be less crowded.

During winter the weather in Lhasa is mild and dry. The nighttime temperature may plummet below the freezing point. Do remember sunlight in Lhasa is very strong and you need to protect yourself from harsh UV rays by using sunscreen whenever you venture outside.

Additionally, you need to protect yourself from strong winds. If you can bear the chilly winds and cold nights you can enjoy vacationing in Lhasa in winter. Do stroll around the busy Barkhor Square and climb the 400 plus steps to reach the most iconic landmark of Lhasa, Potala Palace. Explore the summer palace of the Dalai Lama, Norbulingka. Visit the ancient Buddhist monasteries of Drepung, Sera and Ganden and watch the monks’ lively debates.

Some of the important winter festivals are Losar, Lhabab Duchen or Buddha’s Descent Day and  Lotus Lantern Festival or Ganden Ngangchoe. Losar is Tibetan New Year and the most important festival celebrated by the Tibetans.

Usually, the authorities restrict visitors from traveling to Tibet during this time of the year. Lhabab Duchen or Buddha’s Descent Day marks the return of Lord Buddha from heaven to earth.  The Lotus Lantern Festival or Ganden Ngangchoe commemorates the death anniversary of Tsongkhapa (the founder of the Gelugpa Sect).  It is celebrated by lighting butter lamps and lanerns at the Ganden Monastery.

Best Places to Visit in Tibet