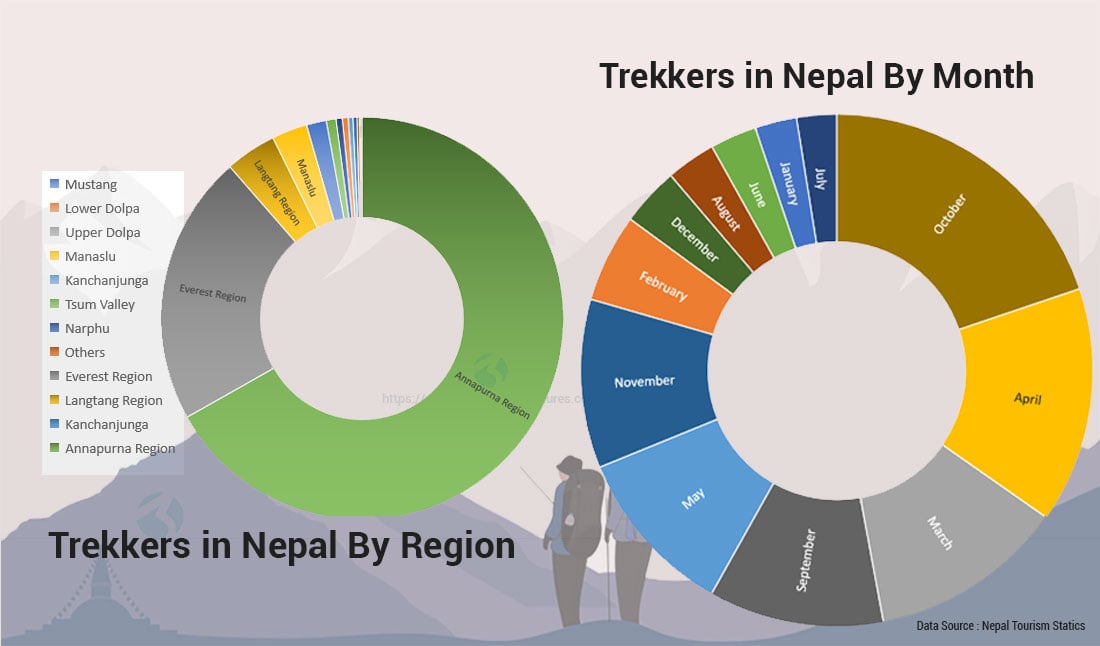 To find out which is the best trekking season in Nepal, you need to learn about the weather pattern of the region you will be heading to.

Nepal is a land of seasonal climatic extremes and Nepal’s trekking seasons reflect this.

The climate in Nepal can be roughly divided into four separate trekking seasons (although there are further variations found within each of these) and the weather in each of these seasons will affect where and when you will go trekking.

The good news though is that no matter what time of year you land in Nepal somewhere in the country it will be the perfect trekking season. Mid of September to mid of December and March to May is considered the best time to trekking in Nepal. 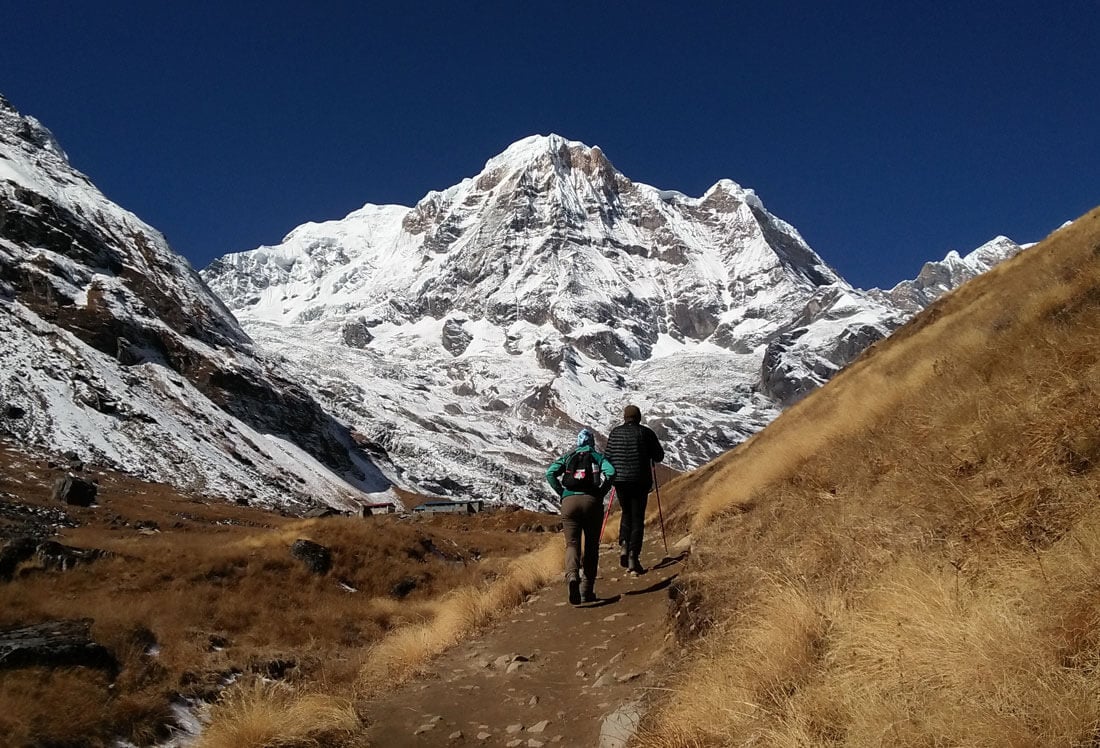 Whether you want to pace the trails of Annapurna or labor up towards Everest Base Camp then October and November is Nepal’s best trekking season. The monsoon clouds have cleared, the weather is settled, the sky blue, the vegetation fresh and green, the temperatures ideal (though it’s always cold up high) and the mountain views as clear as they get.

But, for every plus there are a negative and the trails can be very busy at this time and on popular routes such as those around Everest, Annapurna and Langtang it pays to arrive at your night stop early so as to ensure a bed for the night (late arrivals will never be turned away but might end up sleeping on cushions in the dining room of a teahouse).

The Autumn season is considered the best season to trek in Nepal. The Nepalese festivals Dashain and Tihar are celebrated during this time.

March To May - Spring Season 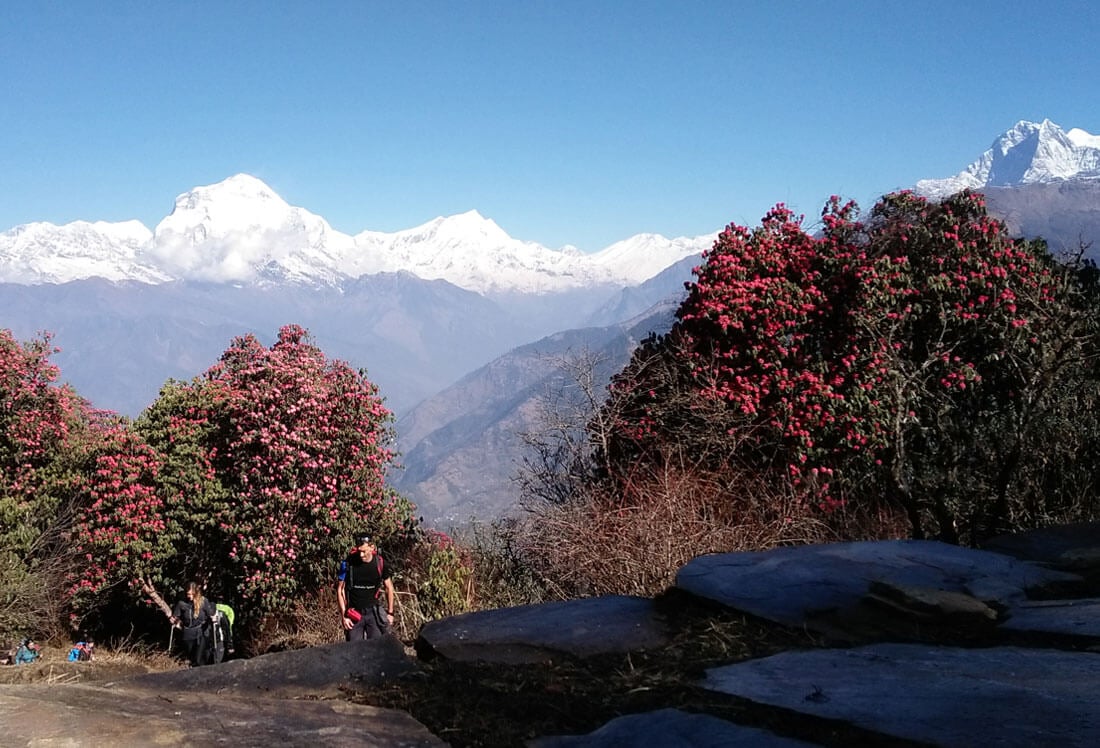 March, April and on into early-May are also very popular Nepal trekking seasons. The heat is fast building up in lowland areas and Nepal on a whole is very hot at this time of year, but that means nights at high altitude aren’t quite as bone-chillingly cold as at other times (good news for those heading to Everest Base Camp!).

Another plus for this Nepal trekking season is that the rhododendrons are blooming in the forests and the trails are a little quitter than October and November.

However, on the negative side, the heat haze makes mountain views a bit hazier and afternoon thunderstorms become ever more frequent. 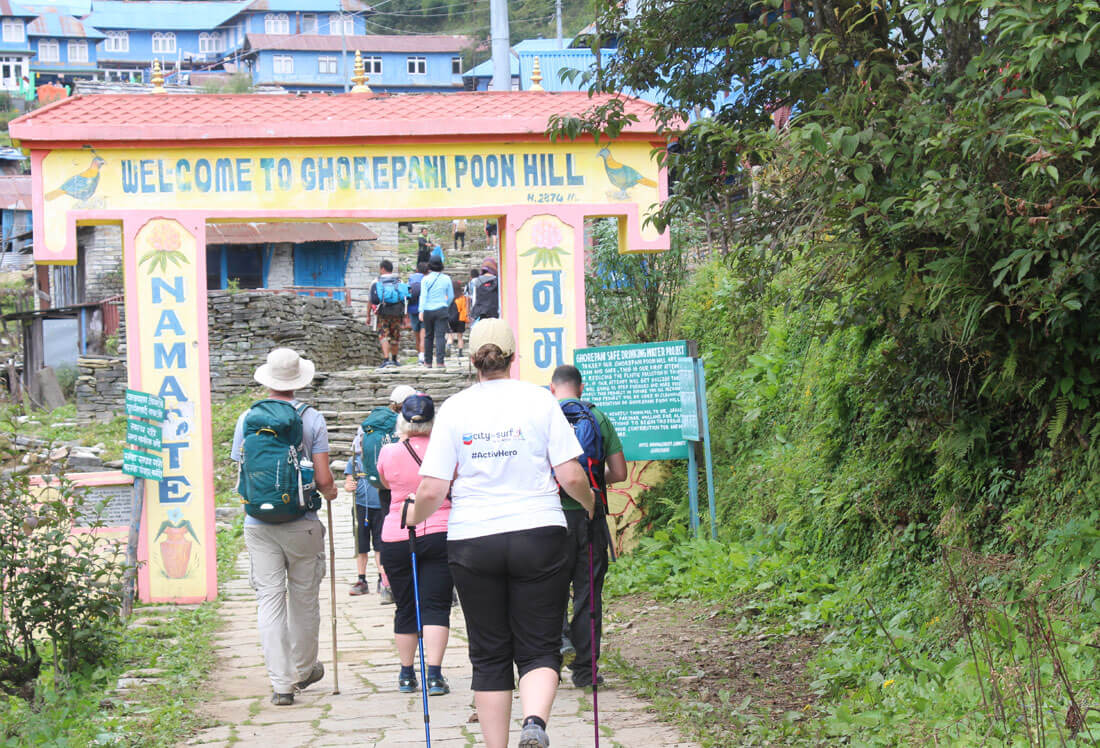 However, you have to be well equipped with serious cold-weather clothing to trek in Nepal during this season. In December snow is possible in the Kathmandu valley which sits at around 1500m, so it goes without saying that at 4000-5000m heavy snowfall is almost a given and high passes can be blocked for days on end. The payback though are quieter trails and sharp, blue skies. 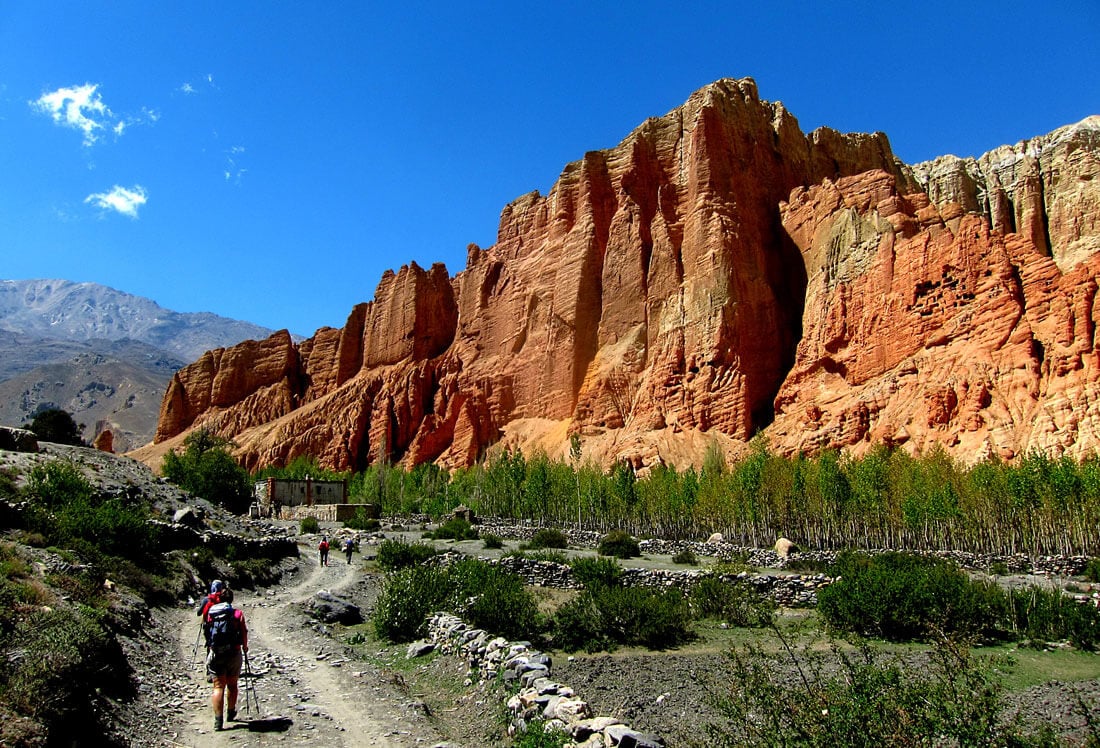 The Indian monsoon, or the wet season, is the strongest and most reliable weather system on Earth and every year between June and mid-September the monsoon unleashes its watery fury on Nepal. Anywhere on the southern side of the mountains will get regular soakings and its wetter the further east you go (so don’t even think of trekking Kanchenjunga at this time).

For Annapurna, Everest, Langtang region and all the other main trekking regions the monsoon is a terrible season for trekking. You’ll rarely glimpse the mountains, most trekking lodges will be closed, landslides are common, mud even more common and leeches are lurking in the undergrowth. Avoid!

Trans-Himalayan regions of Upper Mustang, Dolpo, Limi and other parts of western Nepal are good time in Monsoon season. 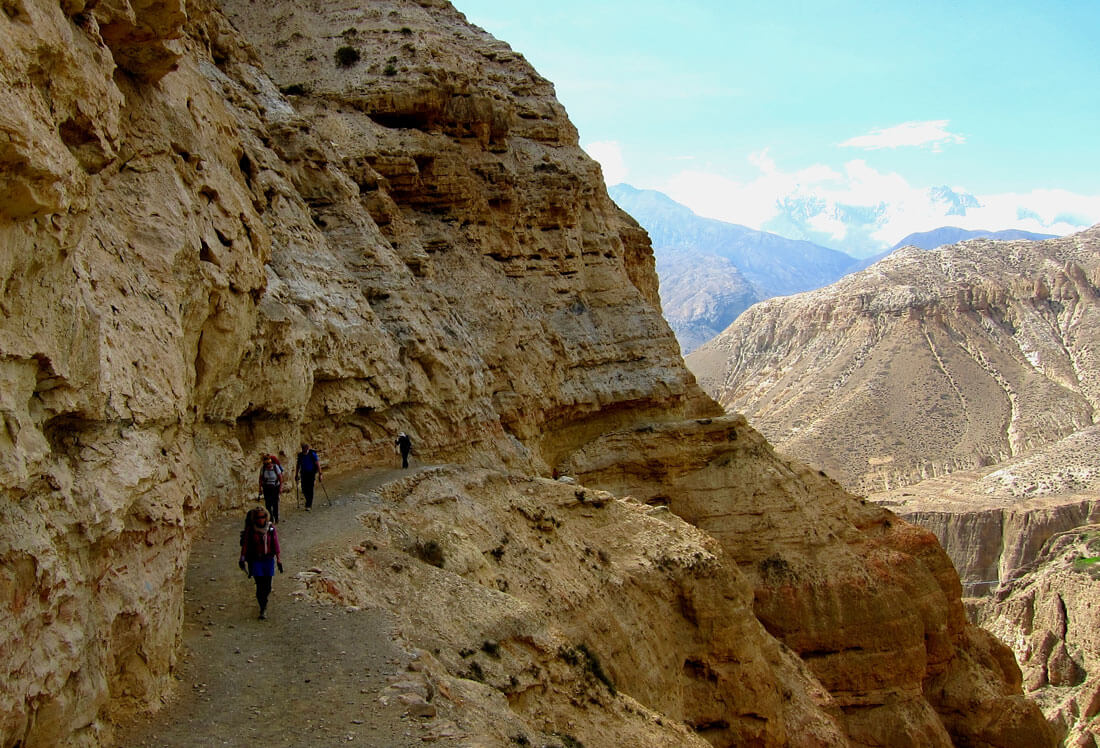 Can’t make it to Nepal for the classic October to April Nepalase trekking season? Want to experience a corner of Nepal that’s less Kathmandu and more traditional Tibet? The answer lies in the secluded trans-Himalayan regions of Upper Mustang, Dolpo, Limi and other parts of western Nepal.

Here, on the leeside of the mighty Himalaya, the influence of the South Asian monsoon is much less pronounced and while the southern mountain slopes are getting a monsoon soaking, these parts of Nepal are often dry and sunny with good mountain views.

And, in addition to offering wonderful – and quiet, trekking between May and September (so the exact opposite of much of the rest of the country), you’ll also experience a raw slice of traditional Tibetan culture that nowadays exists in few other parts of the world.

When To Trek In The Foothills 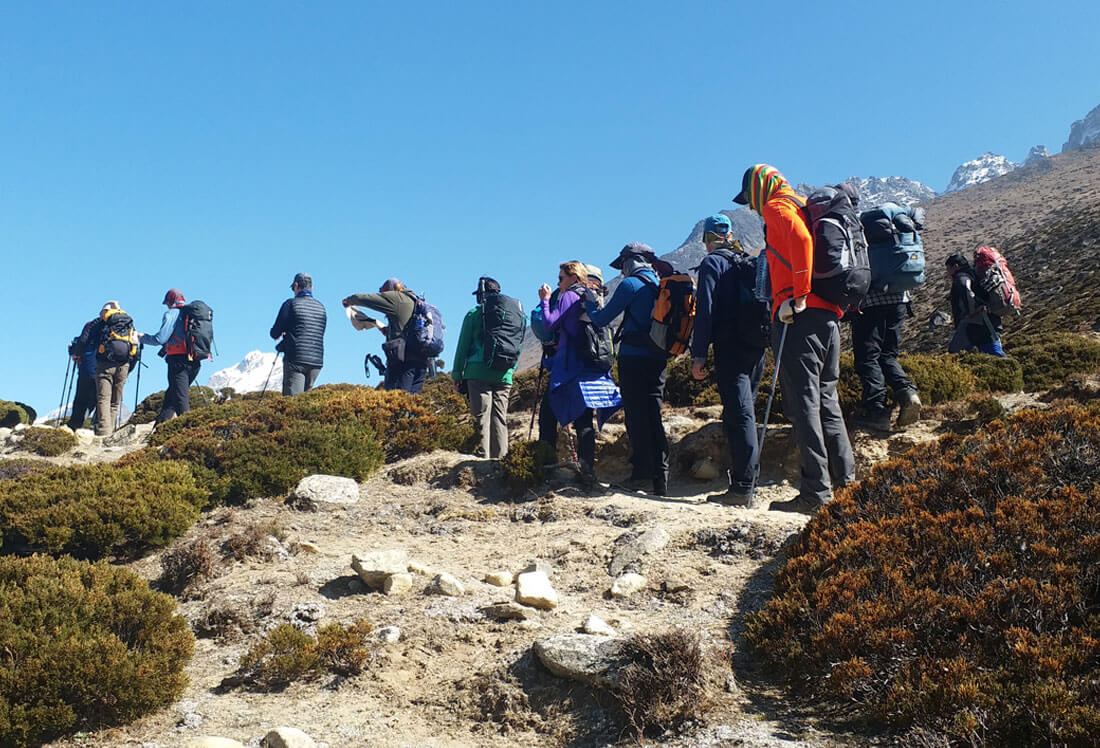 Not all Nepalese treks take you panting over breathless, frozen high passes. Some of the most beautiful scenery – a royal tapestry of terraced rice fields, thatched village houses built around a small temple, cascading waterfalls, flowering forests and gushing, mint coloured rivers – are found in Nepal’s Middle Hills.

The lower altitudes (some of the valley floors might only be a few hundred metres above sea level) means things are hotter and stickier here year round. That means that the trekking season in the Middle Hills is different to other Nepal trekking seasons. April to May is generally hot and humid and not much fun.

June to early October is very, very wet and unpleasant. October to February though is a delightful season to trek Nepal’s Middle Hills and November to January – when higher routes are very cold – is absolutely perfect (though it still gets cold at night and snow is possible).

When To Climb Everest & The Rest

If you’re considering hauling yourself up to the summit of the planet then we’d hope that you already have a pretty good grasp of the nuances of Himalayan weather, but if not then be aware that the Everest (and other Nepalese mountain giants) climbing season is a little different to the normal trekking season.

The average Everest expedition takes two months. This allows time to walk to Everest Base Camp, acclimatise slowly and properly at different heights on the mountain and it builds in some time to wait for the ideal weather window in which to aim for the summit. Statistics show that the best time to summit Everest is in mid-late May. This gives the maximum daylight hours, and the best combination of calm, still weather but with warmer temperatures (warm being a relative term at 8000m!).

So, if you’re aiming for the roof of the world you need to set out for Everest in early-mid April just as all the normal trekkers are starting to head back to Kathmandu. And in case you’re wondering. Yes Everest has been climbed in winter, but only by the most experienced, talented and dedicated Himalayan climbers. 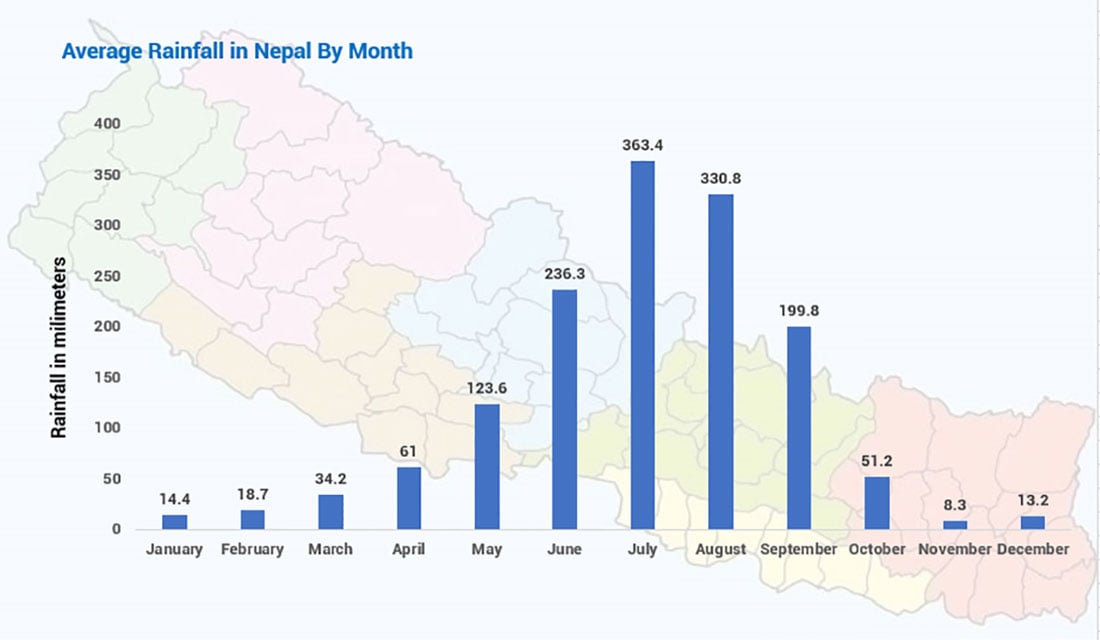