Bhutan Trekking Season - When is the best time to trek Bhutan? 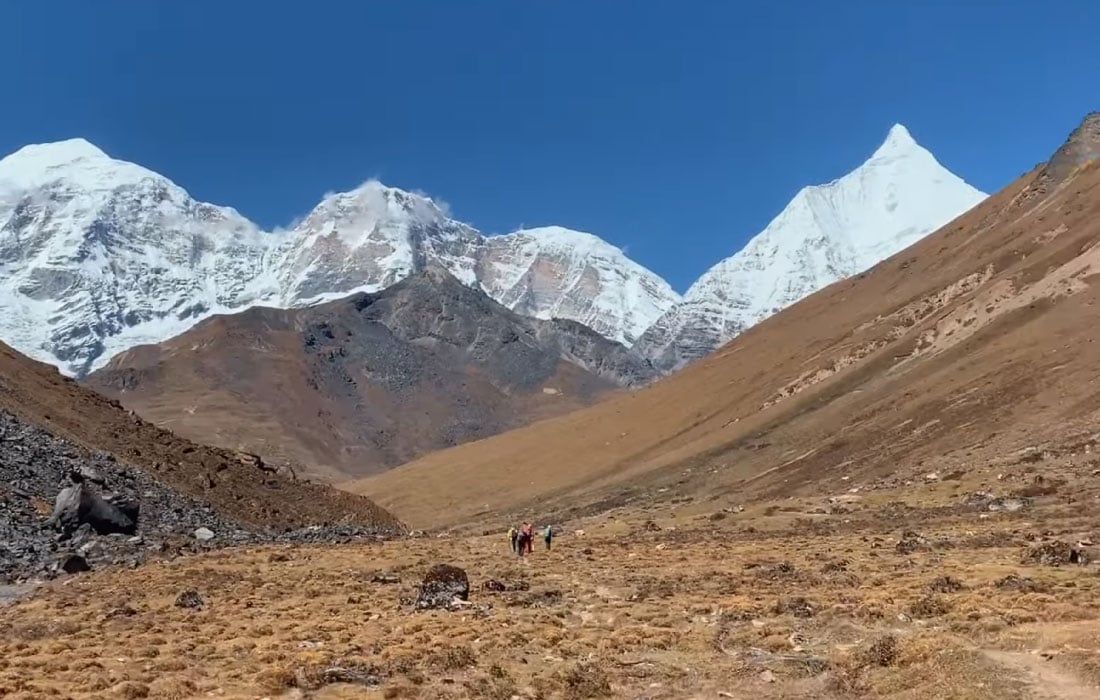 The ideal trekking season for Bhutan is regarded to be Autumn and spring season when the weather is perfect with clear skies and views of majestic mountains and rolling hills.

Best Bhutan trekking season can depend on the weather, climate, duration, and region of trekking. The Autumn season offers clear views of the mountains and valleys and the trails are dry and better than winter and monsoon season. Autumn also welcomes many festivals in the central and western region of Bhutan, making it perfect to immerse into the culture and traditions of the ethnic Bhutanese residents. Hence long and high-altitude treks are ideal for the Autumn season falling in October and November. The Spring season from March to May is considered to be the second-best time to trek in Bhutan because the flora and fauna are at their best. It is also dubbed as rhododendron season because the rhododendrons bloom to the cusp of their prime during this season.

The Winter season from December to February is best for low altitude short treks because at higher altitudes the temperature can fall below 0 degrees Celsius during the day. The roads might also be filled with snow, making it difficult to trek in higher elevations. The monsoon season from June to Mid-September sees a downpour in the lower altitude and unpredictable weather in the higher altitude. Although it is generally avoided by trekkers, the season is better for short sightseeing tours in the religious landmarks around Bhutan.

When Is The Best Time To Trek Bhutan?

Looking at the general geography of Bhutan and the trekking packages, autumn and spring seasons are regarded to be the best time to trek in Bhutan. These seasons are popular among tourists and is also recommended for any kind of hikes, tours, and treks in the Himalayan Kingdom.

The autumn season allows trekkers to visit some of the best treks in higher altitudes. As the weather is clear, the Himalayas are generally calm, making it ideal to set foot above 4000m. The beauty of Bhutan comes alive during these months because of the majestic view of surrounding mountains and hills unaffected by fog or cloud. An average temperature can range from 29 to below 0-degree Celsius during the day. At night the temperature can range from 3 to minus 10-degree Celsius. Valley floors are much warmer during the day than at the higher altitudes. If you are looking for high altitude treks in Bhutan, then the Autumn season is the best time to hop on the next flight to Bhutan.

Best treks during the Autumn season:

While most treks can be done in the Autumn season as well as other seasons, one of the most challenging treks in the world, Snowman trek, is ideal only from late May-June and mid of September-October months. Some of the treks that are best for the Autumn season in Bhutan are:

Spring Season falling from March to May is regarded to be the second-best time for trekking in Bhutan. The Spring season in Bhutan is characterized as the best time for the flourishment of flora and fauna in Bhutan. As trekking in Bhutan will take you through lush forests, you will get a chance to be one with the luscious nature. Most medium to high altitude treks is ideal for March, April, and May. The weather is clear, mostly sunny.

Trekking in the western region of Bhutan is typically promoted as the eastern region can get a little warmer during the spring season. An average temperature can go from 25 to 3 degrees Celsius. The weather is mostly dry but witnesses mild rainfall in the last days of May. If you are a nature lover looking to experience a nature walk amidst rhododendron-clad forests, then Spring season is the ideal trekking season for you.

Best treks during the Spring season:

Most high to medium altitude treks are good for the Spring season.

Winter Season and Treks in Bhutan

The Winter season in Bhutan is not regarded as the ideal trekking time. However, it has gained prominence for being one of the better seasons for short treks in low altitudes. The Winter season in Bhutan falls between December to February. The temperature can range from 10 to minus 5 degrees Celsius during the day. At night, the temperature falls to a minimum of minus 17 degrees Celsius in the higher altitudes.

You can go for treks in the village areas, valley floors, and pastures. Some of the festivals that you can witness during the winter seasons are Lhuentse Tsechu, Trongsa Tsechu, Nabji Lhakhang Drup, Nalakhar Tsechu, Jambay Lhakhang Singye Cham, and Trashi Yangtse Tsechu.

Best Treks during the Winter season

Monsoon Season is an off-season for Bhutan trekking. As trekking in the Land of Druk takes you to high mountain passes, characterized by unpredictable weather, so the monsoon season only amplifies a swift weather change. Hence, it is not the idyllic season for trekking. Rainfall is common during this period making the climate humid and the roads slippery. Although not good for high altitude treks, it is better for short sightseeing tours and luxury tours in nearby religious landmarks. Monsoon lies between June, July, August, and the first half of September.

June is the onset of monsoon season so for the two months to follow, there is heavy rainfall during the afternoon. The cloudbursts can make the roads slippery and problematic to trek. Also, the views of mountains and hills can be obstructed by clouds and fog. Bhutan sees a downpour of up to 529 mm in July. The temperature gets between 24-to-25-degree Celsius in the daytime. The eastern side of Bhutan can realize a temperature rise of 31.5 degrees Celsius. Some of the festivals you can relish during these months are Nimalung Tsechu, Mushroom Festival, Haa Summer Festival, and Kurjey Tsechu.

Although trekking in the first few days of September is not considered to be ideal, after mid-September short trekking is likely. The temperature during this time can range from 11 degrees to 2 degrees Celsius. During mid-September rainfall of up to 247mm is witnessed. The festivals such as Thimphu Drubchen, Wangdue Tsechu, Tamshing Phala Chhoepa, and Thimphu Tsechu can be observed in the towns, villages, and cities.

Things To Consider While Trekking In Different Seasons In Bhutan

To enjoy your Bhutan trek to the fullest it is important to draw out the best trekking season for your preferred trek package. Consider the above list of treks depending on the different trekking seasons for a better understanding of the trekking seasons in Bhutan. You can feel free to contact us if you wish to receive apt guidance from our professionals or to plan your future treks in Bhutan without any hassle.

Top Places to Visit in Bhutan