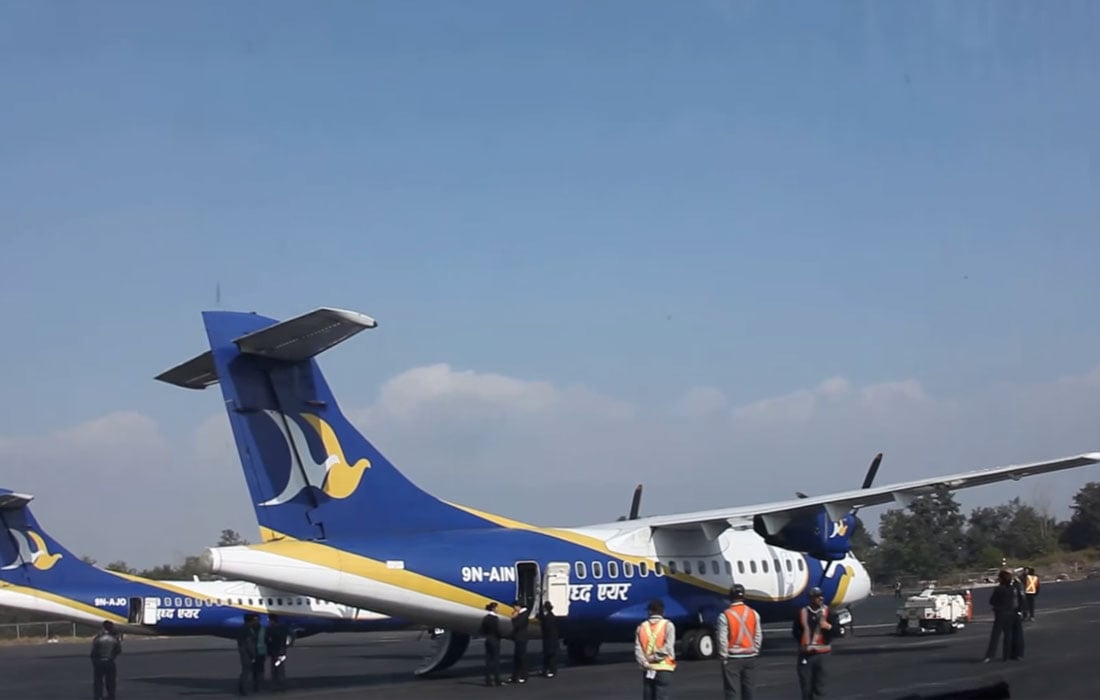 Taking a domestic flight is the best option to travel in a mountainous country like Nepal. It is the quickest and convenient way of traveling when in a tight schedule.

Major cities of Nepal are connected via air route and the longest domestic flight is around an hour long. The domestic airports of Nepal get busiest during peak tourist seasons- spring and autumn.  It will be wise to check in at airports at least one hour before your scheduled flight.

These are some of the popular domestic flights connecting different places of Nepal.

Here are domestic flights from Kathmandu that connect the popular touristy cities. Flying between the cities of Nepal is an easy and comfortable way to travel. 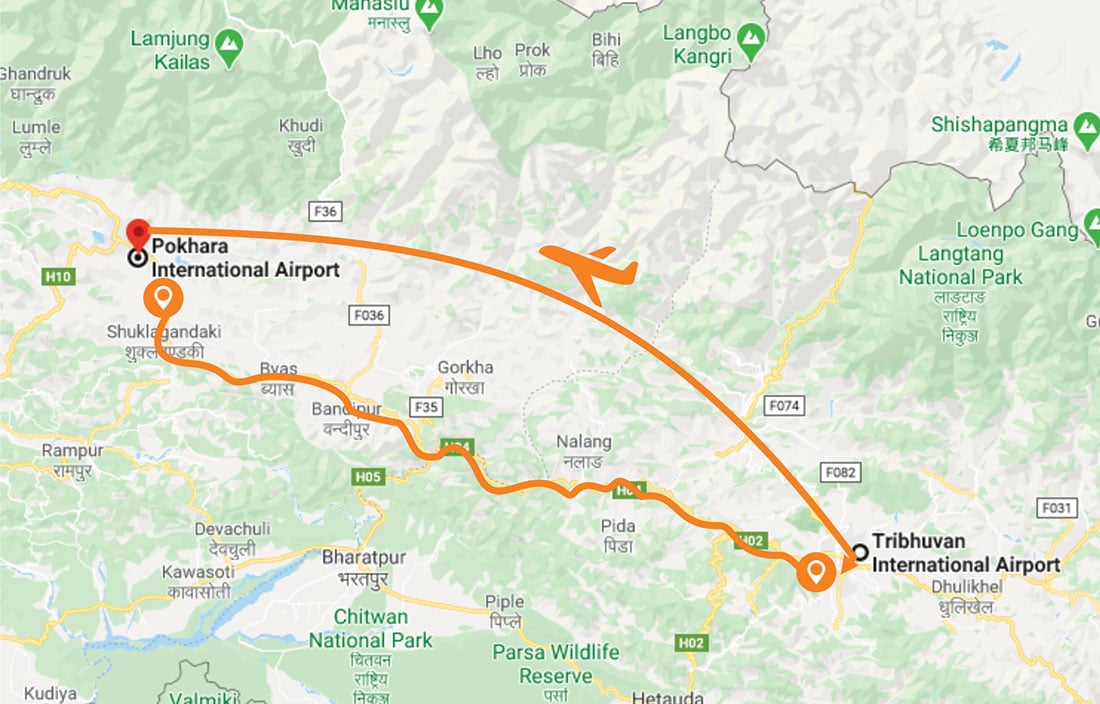 It takes approximately 25 minutes to fly to Pokhara from Kathmandu. Most treks in the Annapurna region starts from Pokhara. Get a seat on the right-hand side of the plane to enjoy astounding views of Himalayas from your window.

Around 10 flights operate daily from Kathmandu to Pokhara. Buddha Air, Yeti Airlines, Simrik Airlines are the popular airlines flying between these two cities. One way ticket to Pokhara from Kathmandu costs around US $125 for foreigners. The air ticket fare for a Nepalese or an Indian is NRP 5,000 approx. You can catch a flight as early as 8 AM and the last flight is scheduled around 4 PM.

Lukla is the “Gateway to Everest Region”. Take a thrilling flight to Tenzing Hillary Airport. Enjoy the stunning views of snowcapped mountains and lush green hills to Lukla. A scenic flight of approximately 35 minutes will take you to Lukla from Kathmandu.

The nearest airport to Lumbini, the birthplace of Gautam Buddha is Gautam Buddha Airport popular as Bhairahawa Airport. It takes around 35 minutes to reach Bhairahawa from Kathmandu. Yeti Airlines and Buddha Air are the major airlines offering flights between these two places. Flights are mostly scheduled between 8:30 AM to 6 PM.

When taking a flight to Chitwan National Park, famous for jungle safari and other jungle activities, you will be landing at Bharatpur Airport. Take a short flight of around 25 minutes to Bharatpur. Buddha Air and Yeti Airlines offer regular flights from Kathmandu to Bharatpur. Flights between these two cities are scheduled from 8:20 AM to 3:45 PM.

The airfare for a foreigner from Kathmandu to Bharatpur is US $109 per person. Nepalese and Indian passengers are charged NRP 3,500 per person. Around 10 flights operate daily between the two popular tourist destinations.

Nepalgunj is the gateway for short treks to Dolpa and Jumla region. It also lies close to Bardiya National Park and Rara National Park. It takes around 50 minutes to reach Nepalgunj from Kathmandu on a flight. There are roughly 8 flights daily.

Popular airlines like Buddha Air and Yeti Airlines operate daily flights between these two cities. Normally the flights are scheduled as early as 8 AM and the last flight departs at 4 PM. A foreigner is charged around US $150 for a one-way ticket from Kathmandu to Nepalgunj. But a Nepalese is charged NRP 4,300 per person.

Bhadrapur is a town in Jhapa district of southeastern Nepal. It is the gateway to treks in Illam, Taplejung, Kanchenjunga, Panchthar, and Makalu Barun National Park. Bhadrapur also lies close to touristy places in India like Darjeeling and Sikkim.

Kathmandu-Bharadpur-Kathmandu flights operate daily by popular airlines of Nepal like Yeti Air and Buddha Air. The flight fare is approximately US $ 137 per person for a foreigner and around 9,000 for a Nepalese. It takes approximately 45 minutes to fly between these places. The flights are scheduled between 10 AM to 2:45 PM.

Tumlingtar is a small town in Sankhuwasabha of eastern Nepal. It is the entry point for trekkers in the Makalu region. The major airlines providing Kathmandu-Tumlingtar- Kathmandu flights are Yeti Airlines, Buddha Air, and Goma Air.

The price of a one-way air ticket is around US $ 138 for a foreigner and approximately NRP 6,000 for a Nepalese. It takes around 35 minutes to reach Tumlingtar from Kathmandu. In a week there are around 3 flights from Kathmandu to Tumlingtar and these are scheduled around 10 am.

Traveling by air is convenient in a Himalayan country like Nepal. These are some of the domestic flights connecting Pokhara and other places in Nepal.

Take a scenic flight from Pokhara to Jomsom ( the town of Mustang). Enjoy the stunning views of snowy mountains including the Dhaulagiri and Annapurna Range and fly over the Kali Gandaki gorge. It takes around 20 minutes to reach Jomsom from Pokhara. Flights to Jomsom are scheduled in the morning from 6:30 AM to 10 AM daily and there are around 10-20 flights every day.

It costs around US $125 one way for a foreigner and Indian nationals are charged around INR 10,500. Major airlines operating flights between Jomsom and Pokhara are Tara Airline and Summit Airlines.

Take a scenic flight from Pokhara to Bharatpur. It takes around 20 minutes to reach Bharatpur. Buddha Air operates a flight between these two places. A flight is scheduled in the morning around 9:45 daily.

Bhairahawa Airport is the gateway to Lumbini, the birthplace of Gautum Buddha. It takes around 40 minutes to fly between these two cities. One of the popular airlines of Nepal, Buddha Air operates daily flight between Bhairahawa and Pokhara.

The price of a one-way ticket is around US $97 for a foreigner and approximately NRP 4,200 for Nepalese. Buddha Air, a renowned airline of Nepal, operates flight between Pokhara and Bhairahawa every day.

Suggested Read: Getting From Kathmandu To Lumbini

Nepalgunj is a city in the plains of Terai and Simikot is a village in Karnali in the far west of Nepal. Nepalgunj to Simikot is a popular flight taken by those traveling to Tibet via Nepal. You will be taking a flight from Nepalgunj to Simikot when taking a pilgrimage tour to Mount Kailash and Mansarovar. Tara Airlines operate flights between two places and flights are scheduled at around 6:30 AM to 10 AM.

Tumlingtar is a city in Sankhuwasabha of eastern Nepal. It is a valley situated between Arun River and Sabha River and is an entry point of trekking in the Makalu region. It takes around 35 minutes to fly between these places. Buddha Air and Simrik Airlines operate flight at least 3 times a week on this route.

The geographic location and quick change in weather cause flight delays and cancellations. The airports of Nepal lacks Instrumental Landing System. Thus flights are delayed and canceled in event of heavy rain, strong winds, and thick fog. Also, the topography of Nepal makes takeoffs and landings difficult.

Flights to Jomsom and Lukla are subject to flight cancellation and delays due to bad weather. You are advised to keep buffer days in your schedule as you may have to change your plans. It will be wise not to have an international and domestic flight scheduled on the same day. Travel insurance will be of great help when traveling.