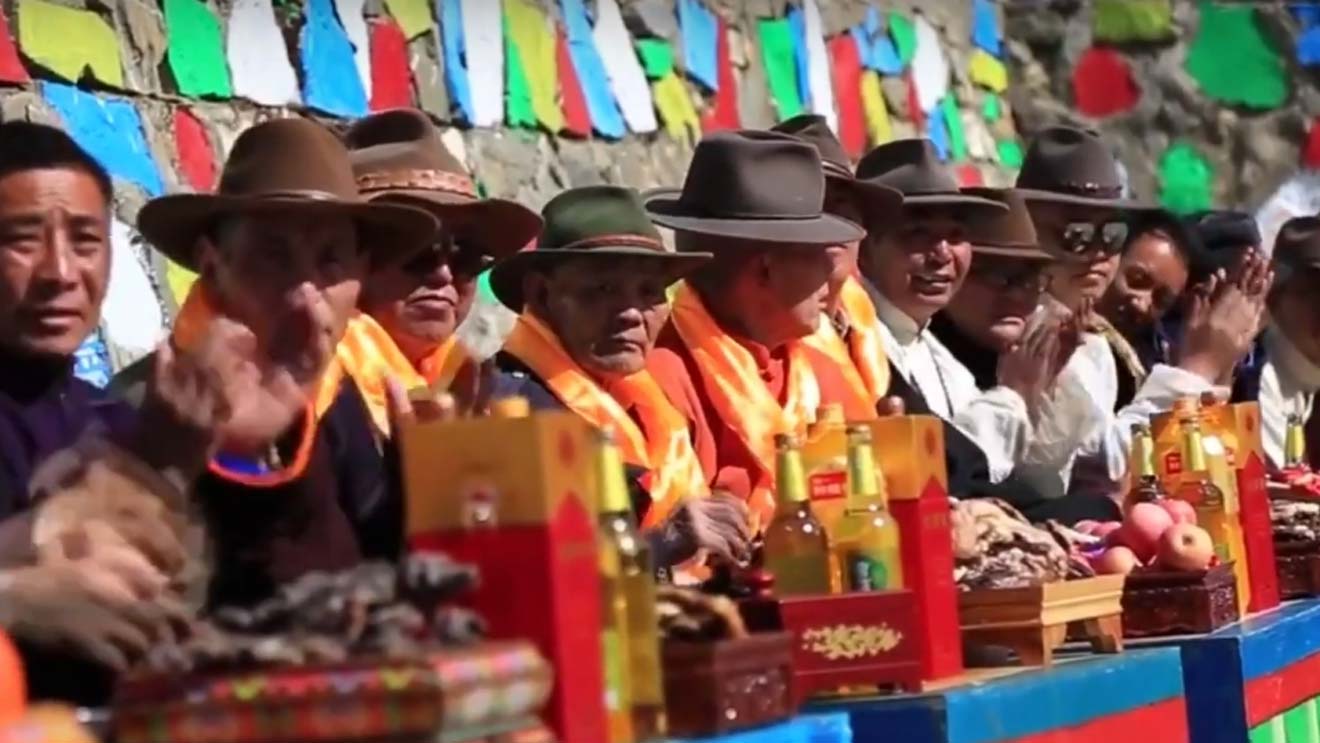 Located high in the lap of the Himalayas, the festivals in Tibet reflects the belief system and lifestyle of the Tibetan people. Being a Buddhist region, the festivals are largely connected to the worship of Lord Buddha or Guru Padmasambhava who introduced Buddhism in Tibet.

Most of the festivals are held in the courtyard monasteries and Buddhist shrines. Some of the major festivals celebrated in Tibet include Losar or Tibetan new year, Saga Dawa, Monlam Prayer festival, Shoton festival and horse racing Festival.

Losar or Tibetan New Year celebrations begins from the first day of the first month of the Tibetan lunar calendar and lasts till the 15th day. The beginning of the new year is celebrated with great pomp and show. It is a time for family gatherings and merry making. New dresses are bought and grand feasts are prepared. Families attend cultural shows which are held to celebrate the New Year wearing fine new clothes. Blessings are sought from learned lamas and elders and offerings are made at the monasteries with prayers for a prosperous year.

The lady of the household plant barley seeds in a bowl and makes a wooden grain box called “Quiema’ praying while prying for a prosperous year for her family. One of the many delicacies that are prepared during Losar include ‘kasai’, a fried sweet dough shaped into interesting shapes.  Wrestling competitions, Tibetan opera and horse races are held as part of the New Year celebrations.

Shoton Festival is one of the most ancient festivals celebrated in Lhasa. The festival falls on the sixth or seventh month of the Tibetan lunar calendar (August in the Gregorian calendar). It is also known as the ‘yoghurt eating festival’, as it marks the ending of the long meditation and fasting taken by the monks by eating yoghurt.

The celebration of Shoton festival begins with the unfurling of the giant 500 square metre thangkha of Lord Buddha at the Drepung Monastery. The procession moves to Sera Monastery and later to Norbulingka, the Summer Palace of Dalai Lama. Common people offer yoghurt to the monks and seek blessings from them. The festival which lasts for five days is filled with cultural songs and dances and Tibetan Opera is performed at the garden of the Norbulingka Palace and the park at the Potala Palace. Ancient scroll paintings of Lord Buddha are exhibited at the Drepung Maonstery during the festival. 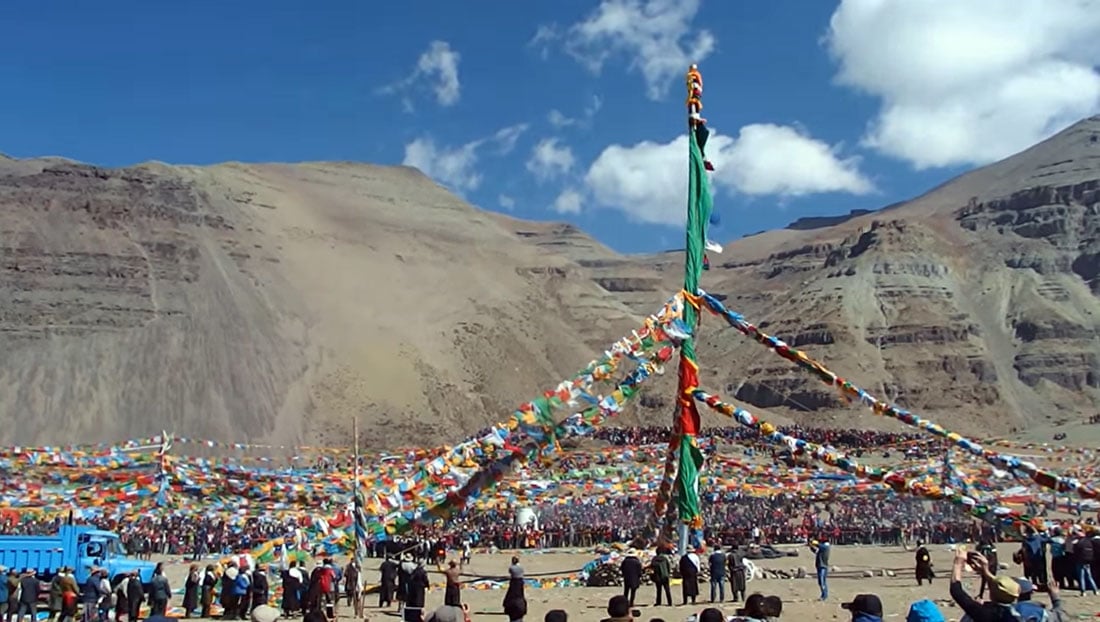 Saga Dawa is one of the most important festivals celebrated by Tibetans. It is held in the fourth month of the Tibetan calendar (May and June) to commemorate the birth, enlightenment and parinirvana of Shakyamuni Buddha. The month long festival is celebrated by taking pilgrimages to sacred Buddhist sites and performing meritorious deeds as prescribed by Buddhist religious texts.

People perform a kora (circumambulation) around Mount Kailash and a new prayer pole is erected at Tarboche, at the base of the sacred mountain. The flagpole, which rises to a height of 25 metres, is covered with colorful prayer flags hung by people asking for a boon. After the flagpole is erected, people walk around it as it is believed that walking around the flagpole 13 times is equivalent to completing a kora around Mount Kailash. Bits of paper with personal prayers written on it are released in the wind with the hope that the wind carries it to the heavens.

The 15th or the full moon day is the most auspicious day as Lord Buddha’s birth, enlightenment and parinirvana took place on this very day. People refrain from eating meat and harming living beings. Birds, fishes and other animals that are caged and captured are freed. This ceremony is called Sojin or the practice of life release. At the monasteries the monks perform chams or masked dances and religious skits.

The Great Prayer festival (Monlam) is celebrated on the first month of the Tibetan lunar calendar. Beginning on the fourth day of the first month, the celebrations end on the fifteenth day. The festival commemorates the teachings and miracles of Lord Buddha. People flock to the monasteries and Buddhist shrines to seek blessings from the lamas and to listen to religious discourses. People pray for the long life of the monks and nuns and the spread of Buddha messages all over the world.

The last day of the festival is known as the Butter Lamp Festival. During the festival monks from Ganden, Drepung and Sera monasteries gather at the Jokhang temple in Lhasa’s barkhor square for prayers and other rituals. Huge sculptures of butter are made and people light thousands of butter lamps.

The Tibetan highlanders are considered to be some of the best horsemen in the world. Horses have been the mode of transport for centuries in this cold high altitude desert. Every year the valleys of Nagchu, Gyantse, Litang and Yushu reverberate with the sound of hooves of the galloping horses. At these places the annual horse races and fairs are held which are attended by nomadic herdsmen and owners of horses. While the majority of the horse racing festivals are held in the month of July and August, Gyantse celebrates its horse racing fest during April.

Horse owners and racing experts congregate at the festival grounds with their prized studs. Competitors vie for the top prize as they try their best to win the competition. With the locals and competitors dressed in their traditional finery, this festival is vibrant as well as exciting. Other events at these festivals include yak races, Tibetan opera and tug of war competitions.

Best Places to Visit in Tibet