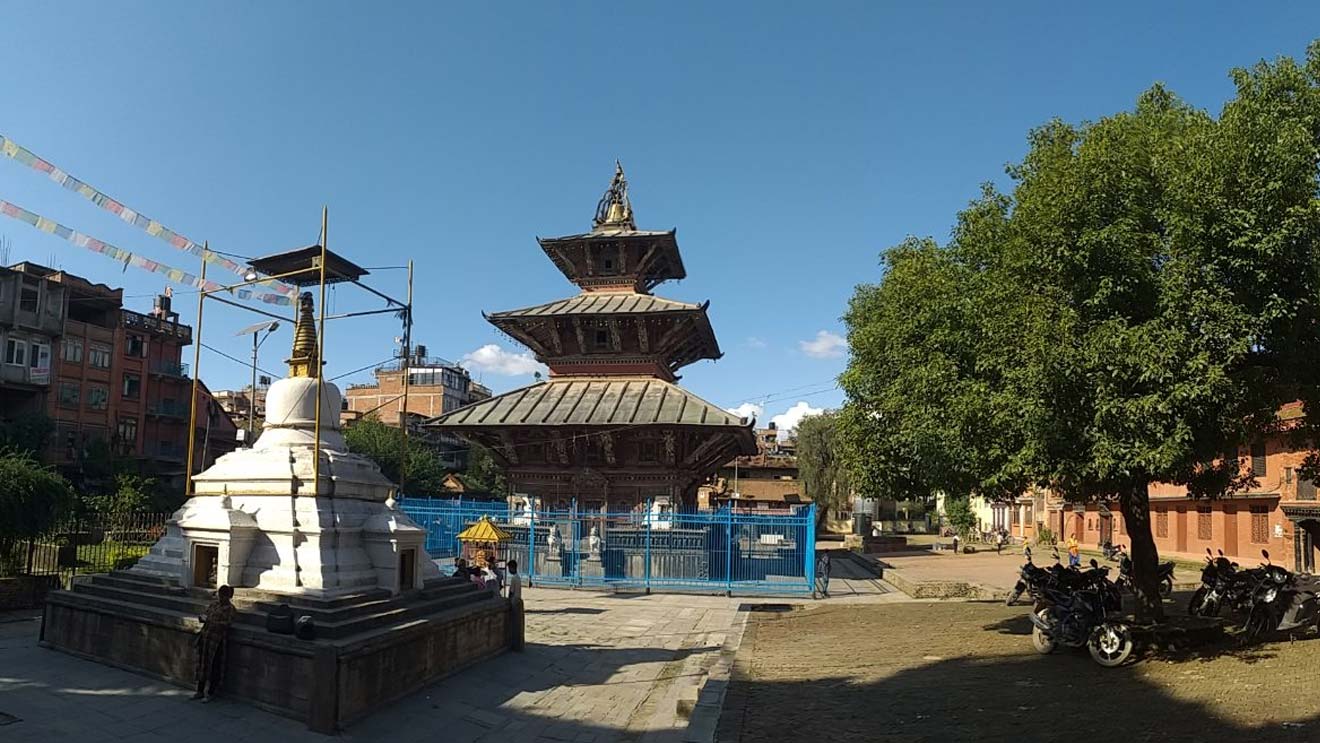 Rato Machhindanath Jatra is the longest running chariot festival in Nepal. Held in Patan, the festival is dedicated to the valley’s rain god. A special chariot is made out of bamboo and wood and the idol of the god is placed inside the chariot. Devotees pull the chariot to different localities in Patan. The festival ends with Bhoto Jatra, a ceremony where the rain god’s bejeweled vest is displayed.

Just before the monsoons hit the Kathmandu valley, RATO MACHHINDRANATH (rain and harvest god) is worshipped by taking him around the valley in a huge man made chariot. Beautifully decorated chariot, inside which resides the ‘God of rain’ Rato Machhindranath is pulled by a group of enthusiastic devotees all very eager to get a glimpse of the ‘RED FISH GOD.’ Who is this rain God and why do thousands of men and women crowd the street to celebrate this very special occasion?

Rato Machhindranath is believed to have been brought from Assam when Kathmandu was suffering from a long drought. He blessed the valley with rain and is thus known as the valley’s rain god. Rato Machchhindranath is also worshipped as Buddhist deities Padmapani Lokeshwar, Avalokiteshwor.

The 1600 year old festival has many legends associated with it. The different stories may have different characters but at the end of the day the story is the same of a drought in the Kathmandu valley and in order to end it, the people seek the help of the rain God – Rato Machhindranath.

Rato Machhindanath Jatra is the longest running chariot festival in Nepal. It is celebrated in hopes of good rain which ultimately will lead to good harvest. The festival commences with the construction of a 32 feet high chariot made out of cane, bamboo, wood in Pulchowk, Lalitpur.

With the help of two big wheels, the chariot is pulled by two strong ropes to keep its balance, while it gets tugged around the city. The procession begins from the place it’s built and slowly starts circling the city via ‘Natole’, ‘Gabahal’, ‘Mangal Bazaar’, ‘Sundhara’, ‘Lagankhel’, ‘Kumaripati’ and finally ending at ‘Jwalakhel’.  The festival ends with Bhoto Jatra- a ceremony where the bejeweled vest (bhoto) of the rain god is put on display.

One of the popular legend states that once ‘Guru Gorakhnath’ came to the city of Patan and no one knew his true identity. Since the commoners didn’t know who he was, no one offered him any food. In order to punish the people, he captured the NAGS (serpents) who were responsible for the rain in the valley and went on to meditate.

With the Nags in captivity, a severe drought hit the valley. The advisors to the then king Narendra Dev advised him to bring the teacher of Goraknath from Assam in India. By doing so, they hoped would stop the drought.

As advised, Rato Machhindranath was brought from Assam to the valley. When Goraknath heard that his teacher was in Patan, he immediately freed the serpents and went to meet him. The serpents created rain as soon as they were free and the valley was saved from a severe drought. Being grateful to Rato Machhindranath, the locals started to worship him and King Narendra Dev started the festival in 897 A.D.

According to the lunar calendar, the festival begins on the 4th day of the bright fortnight of Bachhala, the seventh month in the lunar Nepal Sambat calendar. So if you plan to witness the jatra, one needs to plan their visit to Nepal accordingly.

Before the auspicious chariot pulling begins, the committee that organizes the festival offers a cow to a priest, perhaps the first act that kick starts the festival of Rato Machhindranath Jatra. On this day, there is another smaller chariot that is pulled by little boys; it is the chariot of ‘Minanath’ who is the embodiment of Lord Shiva. The bigger chariot which holds Rato Machhindranath is pulled by a bunch of strong men who shout ‘HASTE HAISTE’ as they slowly pull the chariot forward.

The whole drama is accompanied by music played by traditional instruments such as ‘DHIME’ (traditional drums) and ‘BHUSHYA’ (brass cymbals). People even throw water from their verandah to cool off the chariot pullers. On the first day the chariot is pulled towards GANABAHAL, on the second day towards SUNDHARA and on the third day to LAGANKHEL.

Every time the chariot pulling affair comes to an end for the day, it is signaled by firing three rounds of bullet in the air. Wherever the chariot stops for the day, street vendors take advantage of the pristine location and set up shop for the next day. There are thousands of devotees who line up offering prayers and hope to get a glimpse of the beautiful God inside the chariot.

There are certain interesting moments during the chariot pulling event like when the chariot reaches a place called ‘THALI’ only women of all ages take control of the huge chariot and pull it for a few meters. When it reaches ‘LAGANKHEL’ a coconut is thrown from the zenith of the chariot. It is believed that whoever catches the coconut will have an auspicious year ahead.

An addition to the festival, which has now become a part of Rato Machhindranath jatra- ‘BHOTE JATRA’ marks the end of the long and lively festival. On the fourth and the last day, when the chariot reaches ‘JAWALAKHEL’, thousands of people throng to witness the grand ‘BHOTO’ on display. It is believed that getting a glimpse of the ‘BHOTO’ brings good luck.‘BHOTO’ in Nepali means the inner vest that one wears before putting on ones clothes.

There is a very famous legend associated with ‘BHOTO JATRA’. As the legend goes, once a farmer was gifted this diamond crusted Bhoto by the ‘KARKOTAKA NAG’ for curing the eye ailment of its queen. Unfortunately, the farmer lost the Bhoto while working in his field. Later he saw the same vest worn by a man during the Rato Machhindranth Jatra, which led to a dispute between the two men.

The ‘KARKOTAKA NAG’ who had initially presented the farmer with the vest, was present during the jatra and settled the dispute by offering the vest to RATO MACHHINDRANATH, saying whoever brings proof of the BHOTO shall have it. Till then it will remain in the custody of the deity.

Every year, the vest is displayed publicly on the last day of the Rato Machhindranath Jatra in the presence of Patan’s living goddess (KUMARI) and the head of the state, hoping that someone will come with evidence to claim it.

After Bhote Jatra, Rato Machhindranath is returned to the temple of ‘BUNGAMATI’ where it will stay until the next year. The chariot is also taken apart. The month long festival is celebrated in the Kathmandu valley by both Hindu and Buddhist Newars with great enthusiasm and gatherings. It’s a festival of thanksgiving and counting one’s blessings! If you happen to visit Nepal during mid- May, just before the monsoon, you will definitely get an opportunity to witness this spectacular jatra.