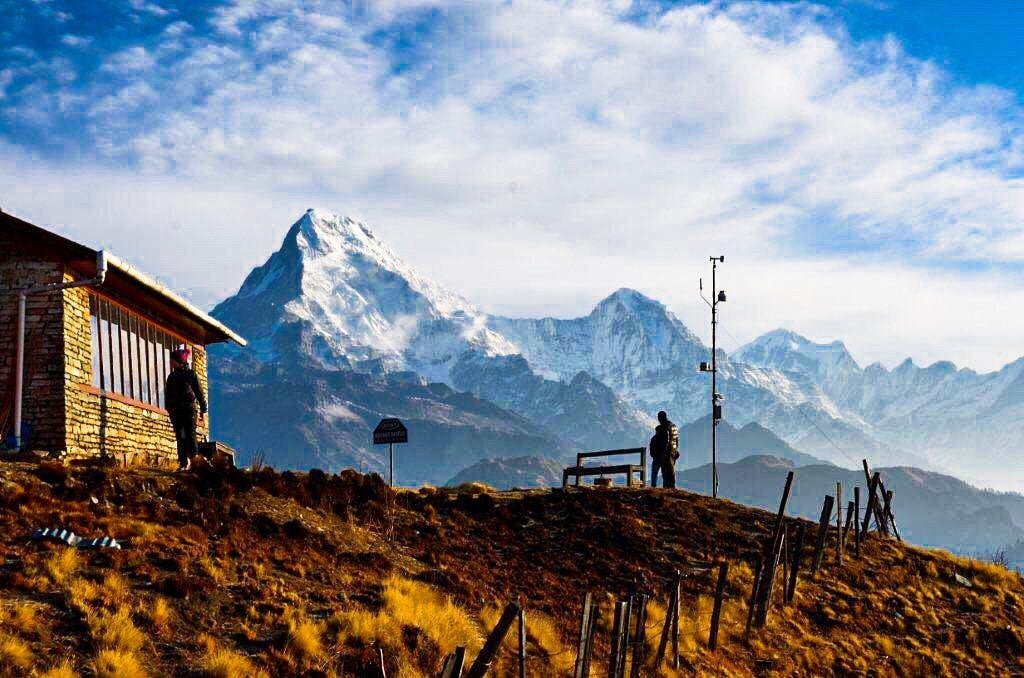 After displacing the old footpath by road, Annapurna village municipality of Myagdi is busy identifying and promoting the new destination.

The Andhagalchi-Tatopani-Ghar-Sikh-Ghodepani-Poon Hill section of the world-famous Annapurna Cycle Trail, which covers the geography of Annapurna, has been displaced and shortened. Dam Bahadur Pun, chairman of the village municipality, said that emphasis had been laid on identifying new tourist sites, construction of infrastructure, and promoting trekking and tourist stay.

The capacity of community lodges at Mohare Danda, and Khopra of Annapurna village has been increased. There were lodges with a capacity of 20 people in two places under the Annapurna-Dhaulagiri community footpath.

The Ministry of Village and Tourism has constructed three three-story shelters in Mohare Danda and an eight-room shelter in Khopra with an investment of Rs 2 million from the Gandaki state government.

Nagendra Garbuja, an employee of Mohare Danda Community Lodge, said that the problem of tourists not being able to stay in Mohare Danda, which is far from human settlements, has been alleviated after the community lodge was upgraded by expanding its capacity and adding facilities.

A footpath connecting Annapurna municipality-4 Narchang to Annapurna Base Camp has been launched in the name of Maurice Hargos of France, who made the first human step on the 8,000-meter-high mountain after successfully ascending the Annapurna I Mountain.

The Ministry of Tourism has built the footpath in the last fiscal year with an investment of more than Rs. 20 million.

After the opening of the footpath, the porters have started taking food and provisions of the climbers and tourists. Before that, you had to charter a helicopter.

Ward Chairman Chandra Prakash Fagami said that the first Annapurna Tourism Festival was held in Narchang last year to publicize the Mauriz Hargoz footpath connecting the basic Narchang-Annapurna Base Camp with a basic level footpath, a bridge over the river, a shelter and a map.

The Gandaki state government has set up Gurans Park in Annapurna Municipality-7 Phulbari with the objective of conserving the national flower Gurans and promoting tourism. It has been claimed that there is a large forest of Laligurans in Bayali, Ghodepani, Phulbari, and Mohare Danda areas of Ward Nos. 5, 6, 7, and 8 of Annapurna Municipality.

With the grant assistance of Rs. 1 million from the Division Forest Office, Myagdi, the Nesrani Community Forest Users Group has built a park by constructing a traditional style roundhouse and public toilet for all 31 species of Gurans gardens and information centers in Nepal.

The Chairman of the group, Lal Bahadur Garbuja, said that the park, which is aimed at developing Gurans as a study and information center, offers a panoramic view of the mountain range in the background.

A bicycle, a pony trail, has been constructed connecting Ghodepani in Annapurna-6 to Pyaribarahi Lake in Ward No. 7. Chairman of the Consumers' Committee Sushil Pun informed that a three-and-a-half meter wide bicycle and horse road had been constructed at different places in the last fiscal year with the assistance of Rs. 2 million from the state government.

A bird-watching spot has been set up at Kalisar on the road and a stable for tourists to ride horses at Bhalkhara," he said. It is believed that the aspirations of the people will be fulfilled if they worship at the Janapurni festival in the lake, which is about 200 meters long and 100 meters wide in the middle of the forest.

Millions of infrastructures have been built in the Ghodepani-Poon Hill area, which is listed among the 100 established tourist destinations of Nepal by the Ministry of Culture, Tourism, and Civil Aviation.

Twenty-three solar lights have been installed on the footpath leading to Ghodepani and from there to the scenic spot again. A three-room shelter building has been constructed in the Poon Hill premises to facilitate safe viewing in case of water and snow. A concrete building of Ghodepani Magar Museum has been constructed.

A two-kilometer footpath has been constructed from Mohare, Ghorepani to Chitre, Khiwang, and Ghandurk. Entrepreneurs of Ghodepani are competing to make concrete houses and hotels as convenient as in the city market.

A five-day footpath study and construction of basic infrastructure has been started through Pauddhar Tourism Cooperative from Pauddhar Tatopani Kund on the banks of Kaligandaki River.

For the first time in Nepal, a 40-capacity hotel has been operated in Khopra under the new concept to bring the benefits of tourism to the community. Ward Chairman Rajesh Tilija said that footpaths were constructed in Khopra, Khayar, Dhadkharka and Kindu areas in the last fiscal year with a budget of Rs. 2 million allocated by the village municipality.

By identifying the footpath connecting the southern base camp of Dhaulagiri mountain in Raghuganga village municipality, a one-kilometer and 500-meter footpath have been constructed from Jalathale to Fagam with a budget of Rs 1 million last fiscal year.

The traditional road used by the people of Dana to herd sheep and cows is being converted into a tourist footpath.

108 taps have been constructed at Motichaur Barah, a religious place on the footpath, with an investment of Rs. 2 million by the village municipality and the community. To extend the stay of tourists visiting Bhurung-Tatopani, a footpath has been constructed from Barah Cave through Mandredhunga to Mundra Chadhaune Danda at an altitude of 3,400 meters.

Ward Chairman Omprakash Fagami informed that two kilometers and 500 meters of footpath had been constructed from the budget of Rs. 1 million allocated by the village municipality in the fiscal year 2077/78 BS.

In order to develop it as a natural treatment and tourist destination, a bathing place, river control, pond and tent have been constructed in Ratopani, Pauddhar and Tatopani ponds of Bhurung.

The Pauddhara-Tatopani Pond Management and Conservation Committee have laid stones on the floor of the new pavilion, small pond, resting place, toilet, and pond.

A museum reflecting the identity of Myagdi has been set up in Kafaldanda of Annapurna Municipality-8 under the leadership of the Karbakeli Baba Conservation Committee. The patron of the committee, Cham Bahadur Pun, said that the museum was set up to conserve endangered traditional materials and develop tourism.

Annapurna Base Camp to reopen from September 17- Day