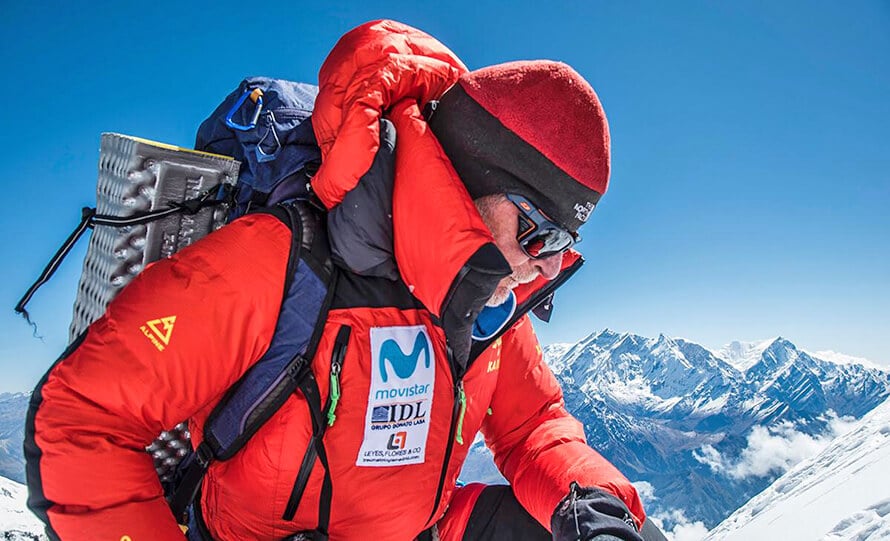 Remembering his childhood, he says, 'I found everything in life with difficulty. I was a very bright child. I tried to get what I wanted. Maybe what I wanted was a mountain, that's what I got. So I managed to climb the highest peaks in the world," he said.

Born into a poor family, he recognized the mountain at the age of 14. Carlos' zeal, courage, and determination are still the same. After climbing the Himalayas, he never feels old. He is an experienced climber who is still active.

So even now, they have not stopped recognizing the mountain. He has decided to climb Dhaulagiri Himal in Nepal on April 5. The coronavirus pandemic hampered his plans to reach Dhaulagiri last year.

Carlos dreams of becoming the oldest person to climb all 14 peaks above 8,000 meters in the world. All he has to do now is to kiss the peaks of Dhaulagiri and Sisapangma in Tibet.

However, Dhaulagiri is not new to him. It was his first attempt in 1998. Even after climbing for the 10th time in two decades, Carlos has not been able to reach the summit of Dhaulagiri. He reached an altitude of 8,050 meters, but his dream of climbing the peak is unfulfilled as he could not reach 117 meters. This time, he is confident of success.

He climbed Kanchenjunga at the age of 75 and Annapurna at the age of 77. At the age of 62, he climbed Mt. Everest. The record for the oldest person to reach the world's highest peak remained in his name for some time and was later broken.

He underwent knee surgery two years ago. But even then, he did not stop climbing the mountain. Carlos says he is physically and mentally able to climb the mountain. "I have not been rescued yet. I reached the heights on my own and returned on my own. I want to try again using all the strength in the world," he says.

The Europe Nepal Chambers of Commerce for Tourism (ENCCT) organized a virtual dialogue with Carlos on Saturday. "I am 82 years old now. This is a risky age group in the Covid pandemic. Many people in this age group lost their lives in the pandemic. Reaching the other two peaks, I would like to pay my respects to the people around the world who have died from the pandemic," said Carlos.

Some have suggested that the program be postponed, saying it would endanger the elderly. But he says he will not stop as he has spent 68 years in Arohan. "Let the world know that a lot of courage can be done even in this age group. With passion, courage, and determination, the dream can be fulfilled," he said.

He has the same challenge of raising money as he does of climbing mountains. Now they are appealing to the sponsor for help. But Carlos says, 'Whether the sponsor agrees or not, I will climb Dhaulagiri mountains. I would be sad if I had to go without a sponsor. But I will leave by showing respect for those people. I don't want to go alone on April 5. I want to go with my two friends Sito and Lewis. I hope all three of us can go. '

He is planning to climb the mountain in Sisapang, Tibet, after the Dhaulagiri diet. If he climbs both these mountains, his dream will come true. He will be the oldest person in the world to reach all 14 peaks above 8,000 meters.

He said that Nepal is his second home. 'Nepal is a piece of heaven," he said. Sharing his experience of mountaineering, Carlos also suggested the government of Nepal should keep the mountains clean.

He also openly praised the supportive spirit of Nepal and Nepalis. Carlos also said that it is becoming easier to climb mountains in Nepal now.

'Sherpas are very experienced and helpful. I admire the courage and bravery of a Nepali sherpa who can complete difficult mountaineering like a boy in winter. I would like to congratulate the Nepali climbing team," he said.