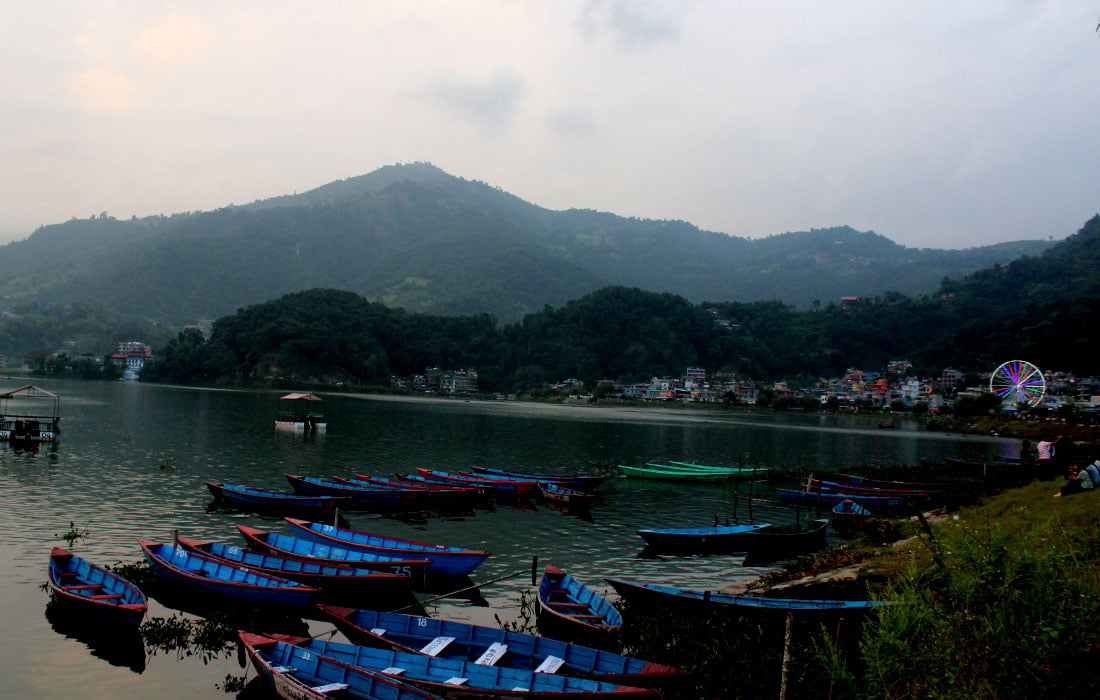 While the government has not been able to reclaim encroached land for lack of a fixed lake boundary, the Supreme Court directive to acquire more land could cost Rs40 billion in compensation.

Tanka Pahari lives on his ancestral land on the banks of Phewa Lake in Pokhara. But for the past 44 years, he has neither been able to sell his land nor legally build any structure on it. Despite the restrictions on his prime land at the tourist hotspot of the lake city, Pahari has been operating a restaurant there for the last six years.

The Phewa Lake Conservation Guidelines of the Physical Infrastructure Development Master Plan formulated in 1976 included an area along the lake as Phewa Conservation Area. In 2007, the Kaski District Council and subsequently in August of the same year the Pokhara Valley Town Committee decided not to allow any concrete structures to be built within 65 metres of the lake.

But like Pahari, for many who own land in the area, the commercial opportunities their land provides were too good to be missed. Buildings that number in the hundreds continued to be built in the area for hotels, lodges and shops aimed at the tourist trade.

Two years ago, the Supreme Court waded in. On April 29, 2018, ruling on a petition filed by Khagendra Subedi, a lawyer, demanding the 2007 decision be implemented, it issued an order to the federal government to immediately remove buildings and business establishments built within 65 metres from the lake’s edge and acquire the private land for the conservation of Phewa Lake.

But there was a catch. The court did not specifically say how to acquire the land that legally belongs to individuals.

“We are ready to leave the land if the authorities concerned provide us with suitable compensation for the land,” said Pahari who owns 604 square metres of land at Lakeside. Half of his land falls within the 65-metre parameter.

The shrinking of the size of the lake has been of longstanding concern. In 1957, according to a Nepal-India cooperation mission survey, the lake covered an area of 10 square kilometres. There have been periodic surveys since then and each found the lake’s area shrinking. The last one by the government survey team in 2007 found the lake measured a mere 4.2 square kilometers. According to geologists, there were mainly two reasons for this: the siltation deposited by around 50 rivulets that feed the lake on its western edge and human encroachment.

The 2012 report also found that another 86 hectares of the lake's area had been illegally converted into private property after the Phewa Lake dam burst in 1974 and recommended the government terminate the ownership of 950 people. The 2018 Supreme Court directed the Ministry of Land Management, Cooperatives and Poverty Alleviation and the Department of Survey to scrap the ownership of those illegally registered land plots and include the area as part of Phewa Lake.

“These properties are in the name of people from outside the area,” said Rana Bahadur Thapa, ward 18 chair of Pokhara Metropolitan City, where the area lies.
The Lamichanne report recommended that around 27 hectares of private land in the northwestern part of Phewa lake should be acquired by providing compensation to conserve the wetland around the lake which the Supreme Court’s ruling in 2018 upheld.
“The local people are ready to evacuate the land if they are provided suitable compensation for their private properties,” said Thapa whose own land also falls within the 27 hectares.

Conservationist Anup Gurung, the executive chief at Lake Conservation and Development Authority of Gandaki Province formed last year, said that encroachment of the lake should be checked.
He argued the Phewa wetland should be preserved to maintain biological diversity protecting migratory birds and other aquatic birds and animals. “People have been cultivating the land at the encroached land of the lake. This is harmful for the wetland. The encroached land should be seized immediately and the lake be saved from being buried,” he said.

For the conservation of the lake, the Lamichhane report had further recommended that 40 hectares of private land from Barahi Chowk to Gairako Chautara through Hallan Chowk and Khahare be acquired by providing compensation for the lake’s conservation.
But without the borders of the lake determined, the government is unable to do anything.

When contempt of court was filed for not implementing the Supreme Court’s verdict, Minister for Land Management, Cooperatives and Poverty Alleviation Padma Kumari Aryal submitted her written answer to the court on September 22, 2019.

“The Supreme Court asked the Office of the Prime Minister to conduct a fresh survey regarding the boundary of the lake. But the lake’s borders are yet to be fixed. I am unable to seize the encroached land as the lake’s border has not been decided yet,” said Aryal in her reply.

It was in reference to the border of Phewa lake that on July 20 this year the Council of Ministers directed the Ministry of Land Management to form a task force and fix the boundary of Phewa lake taking Lamichhane’s report as an important basis.

Last week the Gandaki Province government appointed Punya Prasad Poudel, former chair of the Kaski district coordination committee and a Gandaki province committee member of the ruling Nepal Communist Party (NCP), as coordinator. The other members of the task force are yet to be appointed. But they have their work cut out, by Gandaki Province Chief Minister Prithvi Subba Gurung’s own admission.

“A map with the authentic area of Phewa Lake is available neither in the land revenue office and survey office nor the Ministry of Land Management,” said Gurung. “The federal government is not concerned about the issue of Phewa conservation since it does not affect them. But it affects the provincial government, Pokhara Metropolitan City and the local people.”

Meanwhile, at the local level, in accordance with the Supreme Court decision of April 29, 2018, Pokhara Metropolitan City on May 23, 2019 had issued a 15-day public notice to remove all the structures built within 65 metres of the lake.

However, the local people challenged the metropolitan city’s move at the Pokhara High Court and it issued an interim order directing that the structures should be removed only after providing compensation.
In February this year, the metropolis formally initiated a detailed study about the land that needs to be evacuated around Phewa Lake. The study team comprising 20 people prepared the report and submitted it to Prime Minister KP Sharma Oli on September 14.
The report separately mentions total amounts the government would have to pay in compensation if 30 metres, 35 metres or 65 metres from the shoreline were to be acquired for its conservation.

Man Bahadur GC, mayor of Pokhara Metropolitan City, is in favour of providing compensation while acquiring the private land and structures built there.
“These are private properties of individuals. We should not ask them to evacuate their land without providing them compensation,” he said.

The metropolitan city report points out that almost 66 hectares of private land would have to be paid for and 493 concrete structures demolished if the 65 metre guideline of the Supreme Court were to be followed.
The compensation amount would be Rs 10 billion, as per the valuation of the district land revenue office and Rs 40 billion at market rates, while acquiring this land, says the study report.

But people whose land could be taken over as part of the lake conservation efforts are unhappy even if they get compensation.

They claimed the government does not have any concrete plan after acquiring a 65-metre periphery of the lake.

“The authorities have no plan what to do next after acquiring the private land by providing billions of rupees as compensation,” said Siroj Bijaya Koirala, a Lakeside-based entrepreneur. “The state should collect taxes allowing the use of the land for business activities rather than leaving it unused.”

Ganesh Bahadur Bhattarai, a former executive member of Nepal Tourism Board, agrees with Koirala’s logic.
He said the authorities should form a committee of experts and formulate a Phewa Lake conservation master plan at least for 100 years and only after that should private land be acquired as per their suggestions.
“The government had acquired private land at Basundhara Park, Komagane Park, Camping Chaur and Barahi in the eastern side of Phewa lake four decades ago providing compensation to land owners,” Bhattarai, whose family has been living at Lakeside for generations, said. “Why should the authorities seize the people’s ancestral properties if the land is left unused?”

“My forefathers lived here. I grew up drinking water from the lake,” he said. “Even if the compensation amount is good, I would not want to leave. Money is not everything. I am emotionally attached to this place.”