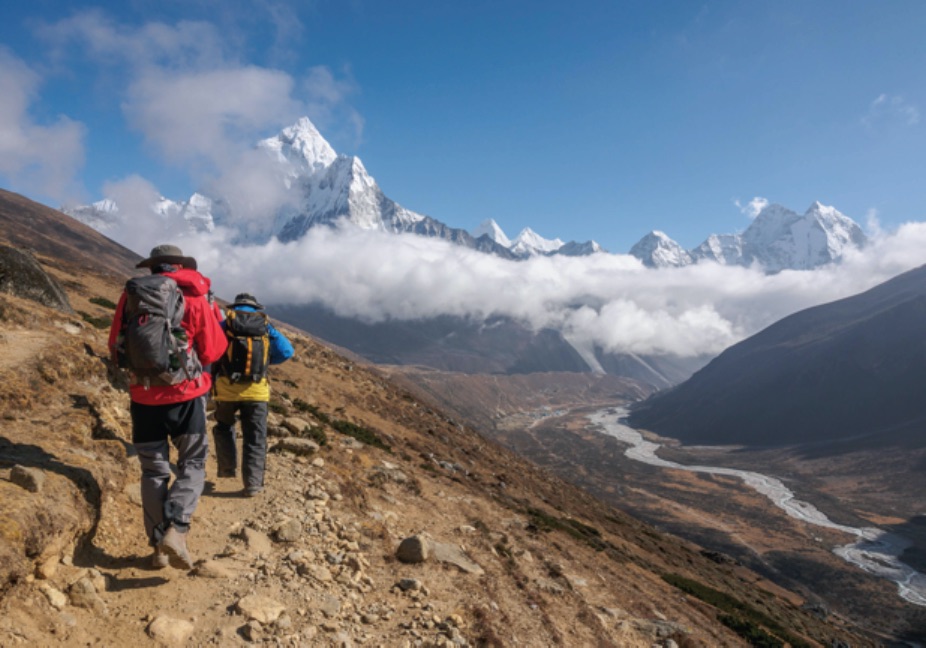 The communities along the Everest Trail have been using the past nine months of the Covid-19 slump in tourism to clean up and upgrade the trekking routes below the world’s highest mountains.

The Nepal government had declared 2020 Visit Nepal Year with a target of attracting 2 million tourists, and there was a lot of hope here that the increased footfall would bring more income. But the Khumbu region was sealed off at the height of the spring tourist season in March and remained closed for non-Nepalis till 17 October.

Since then, trekkers have trickled back, marveling at how clean and quiet everything is.

It is quiet because there are hardly any visitors along the trails, and a coronavirus outbreak in Namche kept even limited visitors away since October. But the reason the Everest region is clean is that local communities have used the crisis to build back better.

To be sure, the global pandemic has been a mixed blessing for the Sherpa people who live below Mt Everest. On the downside, the shutdown meant that the region’s economy suffered a direct hit. Many families lost their seasonal income source from trekkers; many had taken loans to build lodges in anticipation of more trekkers in 2020.

For the thousands of porters, kitchen staff, yak and pony caravan owners, and traders, it has been an unimaginable disaster. Lukla airfield, which used to get 60 flights a day, was closed after the last trekkers flew out in March.

It only reopened in early October, and foreign trekkers and mountaineers were allowed back from 17 October.

The Sagarmatha National Park got more than 60,000 visitors in 2019 – nearly ten times the local population of the region. This year, it has got only 4,000, and most of those after October has been Nepali tourists. The National Park’s income has been sharply reduced, affecting its conservation work.

Sherpas, who usually travel to the other parts of the world for work as mountain guides and other jobs, have not been able to go this year. Sixty households in Khunde, for instance, have members that used to travel to Norway every summer to work on hiking trails there. The families have been deprived of that income.

Another negative side-effect of the lockdown was an increase in poaching. The National Park saw one of its most serious cases in April when six rotting bodies of the endangered Himalayan musk deer and a gold eagle were found caught in wire traps. Altogether 54 other traps set by poachers were found and dismantled. There was also an increase in illegal logging.

Despite all this, the pandemic has had silver linings. Carbon emissions dipped, there was almost no carbon monoxide in the air for six months. Particulates, sulphur dioxide, and nitrous oxide concentrations dropped. Mt Everest was even visible from Kathmandu for the first time in many years.

The peak itself got a much-needed respite from the traffic jams of previous years after the government canceled all expeditions to the mountain. Popular destinations like Gokyo Lake got a chance to revitalize itself from the pressure of tourism.

Nepali mountain guides and porters, who did not get any clients in 2020, were instead engaged by local communities in repairing and upgrading trails and bridges and cleaning up. Complaints by visitors from previous years about the poor state of trails, trash management, lack of signage, etc were addressed.

An example of work accomplished during the lockdown is the response of Khumjung, which made some dangerous sections of the Everest Trail safer, as damaged bridges were maintained. Most volunteered for the work under the principle of ‘for the villagers, by the villagers, to the villagers’, in the firm belief that that ‘every problem provides an opportunity’.

Some who have returned from similar work in Norway and elsewhere put their new skills to good use in rehabilitating the trails using local materials.

The youth of Khunde, Khumjung, Thame, and Namche was self-motivated to make a great effort to conserve and preserve the cultural heritage of their people and respect the gift of their ancestors. Overgrown mani walls and chaitya along the trails have been repainted and cleaned up.

For the first time, many Sherpa children who would otherwise have been in school in Kathmandu were at home and could observe important rituals like the Dumji festival in June and Mani Rimdu this month.

The women’s group in Khumjung had used the lockdown period to clean their neighborhoods and put in place a waste management system that has set an example for other communities in Nepal.