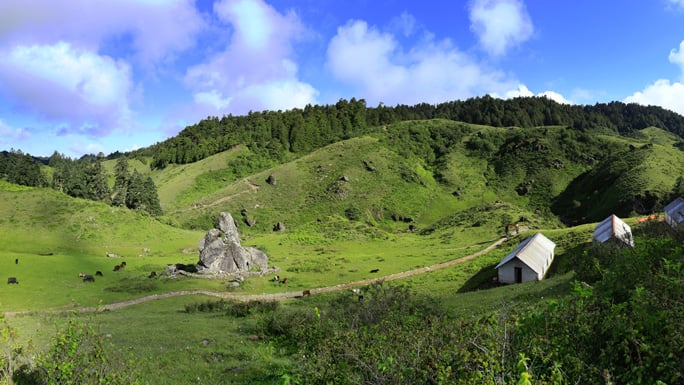 A five-day 'Heli Tour' package has been launched to visit Khaptad, a major tourist and religious site in the far-western region.

The 'Heli Tour' package organized by 'Khaptad Homestay' at Jhingrana, the entrance of Khaptad, has been inaugurated by the Chief Minister of the Far Western Government, Trilochan Bhatta.

Inaugurating the heli tour package from Jhingrana, the main entrance of Khaptad, Chief Minister Bhatta said that the state government has come up with a concrete plan for the tourism development of the Khaptad region. "As it is necessary to provide road access to the area, the work of tarring the road from Silgadhi of Doti to Jhingrana is in full swing," said Chief Minister Bhatta.

Bhatta said that coordination would be made with the federal government for power supply within the park area. He said, "Tourists are complaining that there is no provision of food and accommodation. The state government is ready to build the necessary physical infrastructure."

Accompanied by Minister for Internal Affairs Prakash Bahadur Shah and Minister for Industry, Tourism, Forest and Environment Maya Bhatt, Chief Minister Bhatt said that the process of making Wadi village near Jhingrana a tourist village has already started. He also urged the locals in the area to set up homestays.

Director of Khaptad Homestay Deepak Bahadur Khadka informed that 20 people, including the minister, reached Khaptad on the first day of the heli tour package. Khadka said that separate packages have been brought from Dhangadhi, Dipayal, Jhingrana, Bajhang, and Achham to visit Khaptad. He says, "The goal is to take 300 tourists on a heli tour in five days."