Increase in domestic travelers during pandemic 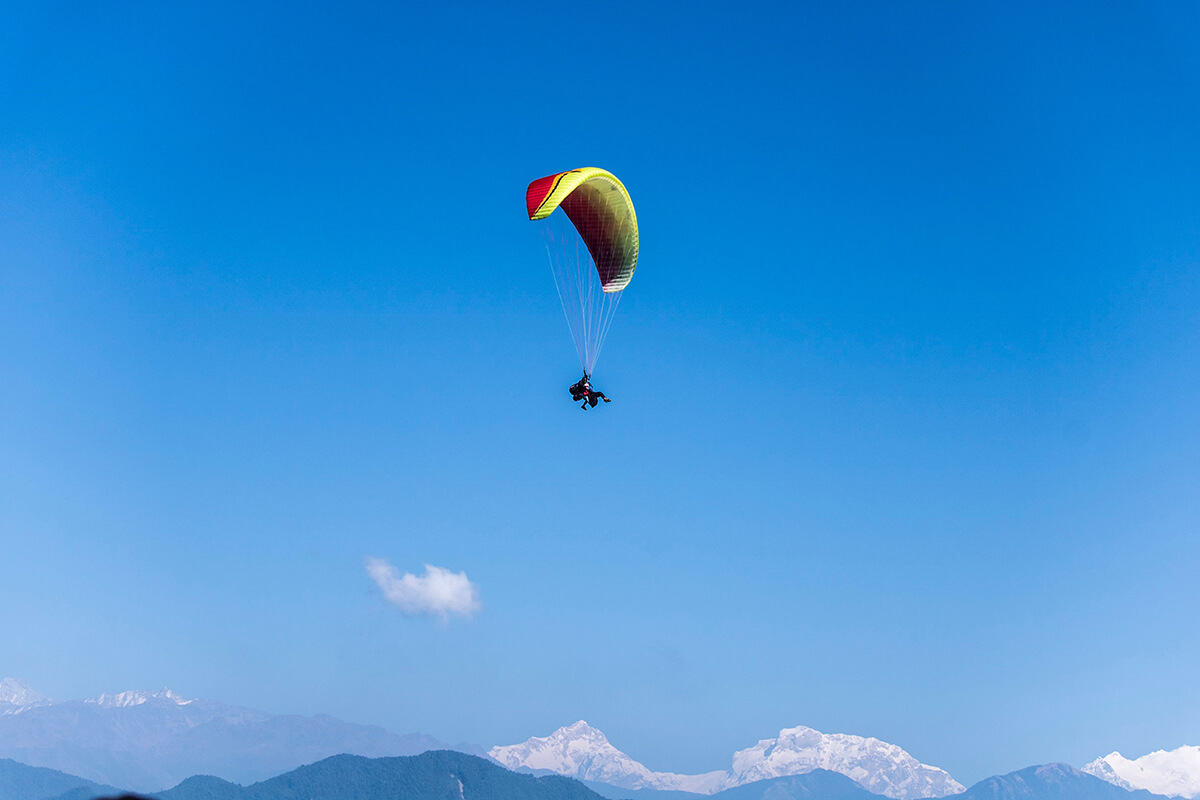 Nepalis started traveling within their country in numbers after the insurgency and this trend has been growing. But officials and entrepreneurs need to do more, experts say.

Two weeks ago, 22-year-old Sushmita Ghale of Lekhnath, Kaski, went to Manung Kot in Tanahun.
“For days, Manung Kot had been trending on social media, and that was reason enough for me to go and take photos and videos for my social media,” said Ghale.

“The day I was there, there were at least 200 people, and so many of us were making TikTok videos.”
Three weeks ago, when Khem Raj Lakai, a hospitality educator and tourism expert, traveled to Bandipur, he saw that the picturesque town, despite the pandemic, had plenty of Nepali tourists.

Rohit Gurung, a resident of Kathmandu, traveled abroad for a vacation for the first time in 2016, and ever since, he has made it a point to travel abroad once a year for a vacation. Last year, he and his family traveled to Singapore, Malaysia, and Thailand.

“My girlfriend and I were planning to go to Indonesia this year, but due to Covid-19, it wasn’t feasible. So this October, we went for a nice week-long vacation to Chitwan and Pokhara,” said Gurung.

Tourism experts and entrepreneurs are hopeful that 2020 will serve as the inflection point for the industry that has relied mostly on foreign tourists and the government to put more emphasis on domestic tourism.
The trend of Nepalis traveling for leisure within the country has been on an upward trajectory.

“For the last five years, in popular tourist destinations of Pokhara and Chitwan, domestic tourists are the biggest source of revenue,” said Binayak Shah, first vice president of Hotel Association of Nepal. “This goes on to show how the domestic tourism sector has grown over the years.”

Ever since Nepal opened to foreigners in the 1950s and foreign tourists started coming to an unexplored country, it has been catering mostly to them.Things started to change in the 1990s, according to tourism entrepreneurs.

In 1996, the Maoist insurgency began in Nepal, and as the conflict started gaining a foothold in the country, the number of foreign tourists visiting Nepal declined and tourism businesses in the country were left grappling with existential uncertainty.

It took an insurgency, says veteran tourism entrepreneur Mahendra Singh Thapa, the managing director of Equator Expeditions, for the industry to realize the importance of domestic tourism.

After the insurgency ended, more and more Nepalis started traveling for leisure as their incomes rose and the domestic market started growing, according to Thapa.
Another turning point came with the 2015 earthquakes when many foreign embassies issued travel advisories to their citizens against visiting Nepal.

That year, foreign visitors to Nepal dropped to 538,970 tourists from 790,118 in 2014. “That year, the industry was made to realize the important role domestic tourism has in making the tourism industry more resilient and less vulnerable to external shocks,” said Lakai.

According to a report by the World Travel and Tourism Council, spending by Nepal’s domestic tourists made up 56 percent of the industry’s total revenue of Rs 240.7 billion in 2018.

Five years after the earthquakes, the pandemic has further driven home the importance of domestic tourism.
Despite the pandemic, or rather because of it, Shusil Adhikari of Rupakot Resort, Lekhnath, Kaski in June started designing packages for the high-end domestic market.

“In July, when the nationwide lockdown loosened, we introduced our first holiday package, and since then, we have launched several. On October 1, we launched an overnight stay package with two meals at Rs 11,000 net for two,” said Adhikari.

“The response was overwhelming, and in the month of October, we managed to do 60 percent of the business we did in the same period last year, which I believe is a major accomplishment given that we are in the midst of a pandemic,”

For properties like Sukute Beach Adventure Resort in Sindhupalchok, which caters to mid-range domestic tourists, as soon as the lockdown was loosened in July, it was business as usual and has been hosting an average of 800 guests every month since, according to Thapa, who operates it.

“To be honest, despite the pandemic, we have been quite busy for the past few months,” said Thapa. “In the ongoing crisis, I don’t think properties that primarily cater to domestic tourists have suffered as much as those that don’t.”

Business has also been relatively decent at the recently opened The Cliff, an upper mid-range adventure resort in Baglung.

“The Cliff started taking guests on October 31, and our primary target is Nepalis who opt for quality when they travel, and so far, the response has been good,” said Ishow Karki, the property’s managing director. “We have been getting an average of 40 guests partaking in bungee and swing jumps, which are two of our main highlights.”

The resort, says Karki, also sees a huge number of people coming daily to take photos and videos at the resort’s bridge, from where bungee and swing jumps are conducted.

Social media, say, tourism experts, is another factor that has given domestic tourism a huge boost.
Nepal’s huge user base, says Adhikari, has made social media a very effective tool to promote destinations and properties.

“Once posts go viral on social media, they instantly start trending and everybody wants to go there,” said Adhikari. “This has made it extremely important for properties like us to be social media savvy to tap the domestic market.”

The government, says industry’s stakeholders, also has a huge role to play if the industry is to successfully tap the country’s growing domestic tourists.

“Government support and cooperation to the industry is extremely crucial,” said Hotel Association of Nepal’s Shah. “When the government announced the budget this year, it announced financial incentives for its employees to travel for leisure within the country, but so far we haven’t heard anything of that announcement. In a time like today, this could have helped the industry a lot.”
In September, the Tourism Ministry, in its bid to help the tourism industry, announced that it was sending a proposal to the Cabinet about having a two-day weekend.

“This move could provide a huge boost to the domestic market. In a place like Kathmandu, when you have a two-day weekend, destinations in the Valley’s rim will see a surge in domestic tourists,” said Shah. “Unfortunately, it’s already two months since the Tourism Ministry’s announcement and we are yet to hear anything about it.”
But it is not only the government that needs to give domestic tourism a helping hand.

For the country’s domestic tourism to grow, say, experts, the industry too needs to make changes and improve things.

“The industry needs to better understand the domestic tourism sector and tune itself accordingly. One of the areas that I think needs focus is food and beverage,” said Adhikari. “Unlike foreigners, we Nepalis love spice in our food and hotels that primarily cater to foreigners and are used to preparing food in a certain way will have to make necessary changes.”

Service is another area in the industry, say, stakeholders of the industry, that needs improvement. For years, establishments that primarily cater to foreign tourists in the country were known for giving preferential treatment to foreigners over Nepali guests.

While the scenario has improved drastically over the past few years, preferential treatment to foreigners still exists, says Karki.

“This notion of western tourists being more valuable is so deeply ingrained in our minds and the only way to do away with it is to better train hospitality staff,” said Karki.
This is evident both in the hotels and lodges in the trekking routes as well as in the cities.

“At a leading hotel in the city, I have been treated very differently on occasions I visited wearing a suit versus jeans and shirt,” said Lakai. “This clearly shows a lack of professionalism and the basic understanding of hospitality, which is to serve and treat every guest with care and without judgment.”

There’s also a notion, says Lakai, that the domestic tourists are extremely price sensitive.
“This is true to a certain extent, but there’s also a growing segment of domestic tourists who are willing to spend money as long as they get their money’s worth, and the industry needs to understand that focus on providing value for service,” said Lakai.

“For a country’s tourism industry to be resilient, domestic tourism has to be its backbone, and it’s no different in our case. It’s time we not only realize that but also work accordingly to achieve it,” he said.