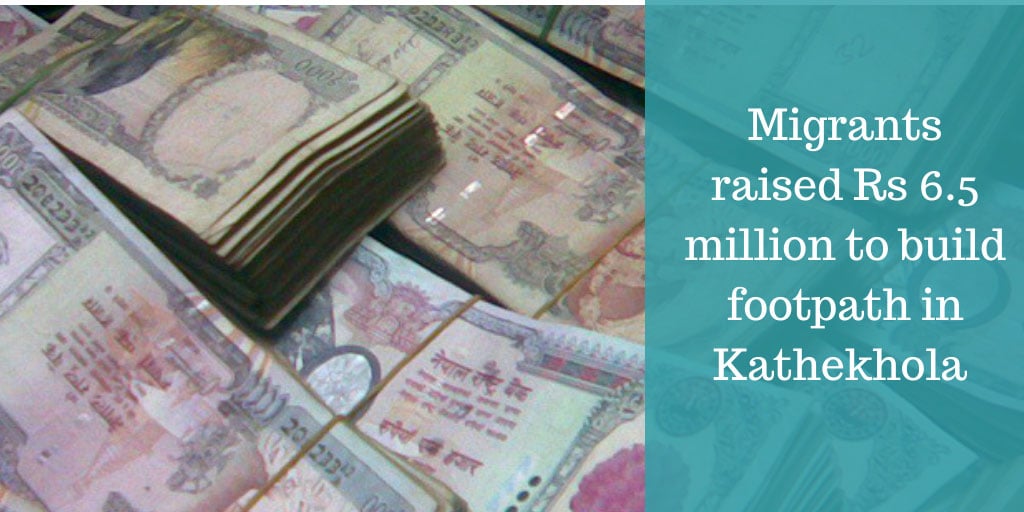 Construction of footpaths has been started in Bihum and Ramkot religious tourist destinations with the help of migrants. Swami Gyanananda Saraswati, president of the Sant Samaj, laid the foundation stone of the footpath connecting Kathekhola Shantichoke to Tripureshwor Mahadev Temple at Ramkot in Ward No. 5 on Wednesday.

Chairman of Ward No. 5 Shiva Prasad Kandel informed that the construction of a footpath had been started through the Consumers Committee. The target is to complete the 400-meter long footpath within six months. Bihumkote living abroad has raised funds for the construction of the footpath. It is stated that Rs. 6.5 million has been collected so far from the aid campaign.

The fundraising campaign is being led by Prem Kandel, who lives in Japan, said Ward Chairman Kandel. "Bihumkotes from Japan, Europe and the United States have joined the campaign," he said.

As the money collected so far will be spent only on footpaths, the Financial Collection Committee is working to mobilize additional support for the Bihunkot Conservation Project. Both the schemes are estimated to cost around Rs 15 million. A budget of Rs. 634,000 has been allocated for the footpath in Ward No. 6.

After the construction of the footpath, the movement of religious tourists and the general public of the village will become easier. From the footpath, you can also see the beautiful mountain range.

As Pushpalal is close to Ramkot from the Mid-Hills Highway, it can be easily reached by car. State bodies are mobilizing investment and support from the people to make Ramkot an attractive destination for religious tourism. The village municipality plans to develop Ramkot as a pilgrimage site.

The Tripureshwar Mahadev Temple in Ramkot hosts a fair with Shivaratri, Akshay Tritiya and special worship on May 23 every year. The temple has a 500 kg Shivalinga brought from the river Narmada in India. Basaha, Karuwa, Kalas and other historical items found during the excavation in the temple premises have also been collected.

The winners of the 'Single Hymn Dance Competition' organized by the Economic Collection Committee online were also awarded during the footpath laying ceremony. Susan KC of Gemini Municipality, who came first in the competition, got Rs 50,000, Janissa Pun of Gemini, who came second, got Rs 30,000 and Rajendra Kandel of Kathekhola, who came third, got Rs 20,000.

Similarly, Pushpa Kandel and Anuradha Kandel of Kathekhola, who got a consolation place, were awarded Rs 10,000 each. There were 50 participants in the competition.

Annapurna Base Camp to reopen from September 17- Day