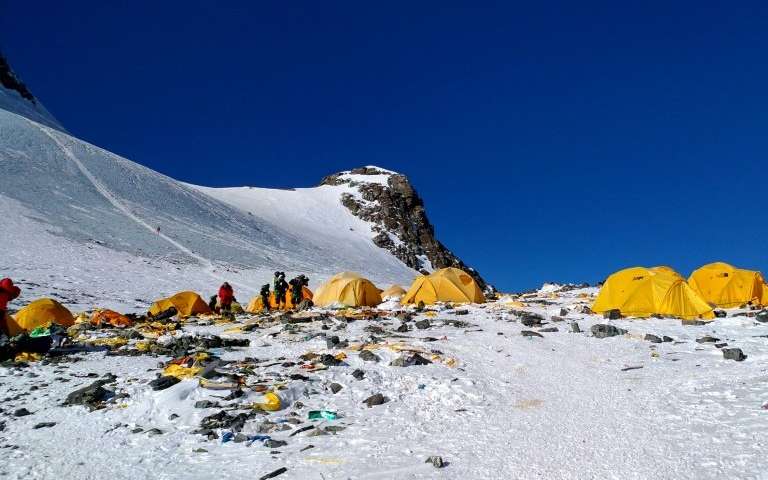 Sagarmatha, also known as Mt. Everest or Chomolungma, is the highest mountain in the world. Though conquering the height of 8848m is the biggest dream for many mountaineers, only a few hundred are able to reach the summit. However, the negligence in terms of waste management from fellow climbers is threatening the natural environment of the mountain as tons of waste is piling up each year.

In a normal season, the peak receives around 800 mountaineers and tourists. In addition, each climber is assisted by a group of Sherpas and porters. The overcrowding in Everest has worsened so much in recent years that climbers have to stand in the freezing air for hours before taking a step forward.

One major culprit of the overcrowding is the surge in commercial mountaineering. Though Everest was a mountaineer’s adventure in the past, anyone with money and little to no experience can climb to the summit now.
The climbers start their quest with a number of supporting equipment like oxygen tanks, mountaineering gears, tents, and foods. However, they eventually end up discarding most of the items on the way in order to ease the journey. NatGeo, a non-profit global organization, reporting on scientific issues, states that an average person generates around 18 pounds of waste (around 8 kg) before finally reaching the summit.

Similarly, organic waste like human feces and corpses of unlucky climbers can’t be undermined as well. The cold temperature and ice create an ideal environment for human excreta and bodies to be preserved for a long period of time. Researchers from Grinnell college found that 12 tons of feces are left intact in Everest each year.
As the ice thaws during the summer and monsoon seasons, the human waste mixes and contaminates the water. This results in diarrhea and gastrointestinal problems for climbers as well as local people who drink water from the polluted source. Moreover, the melting of glaciers due to global warming further exposes this waste to the freshwater.

With the increasing environmental consciousness, the Nepali government has launched various programs to combat Everest pollution. In 2019, the government compiled a team to clean around 11 tons of waste in a period of 45 days. Following the initiation, Nepali mountaineers are looking forward to clearing around 35000kg of waste from Everest and five other mountains of Nepal in 2020.

Furthermore, climbers are now required to bring 8kg of waste or compensate $4000 USD. However, it’s been estimated that 30 tons of waste still rests untouched on the mountain.

Though local peoples and environmentalists have launched various sanitation programs in Everest, the root solution to the problem doesn’t lie in cleaning, but not polluting in the first place.