Nepal building a highway to Everest 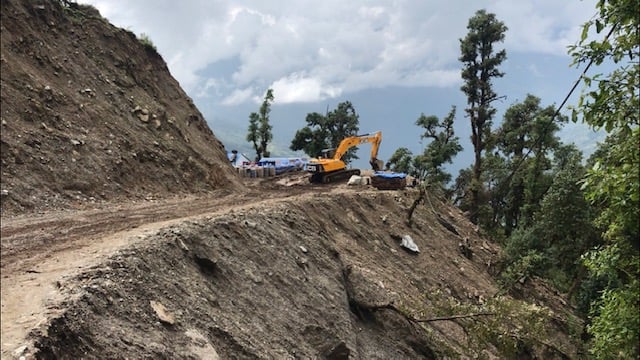 Excavators are clawing through sheer cliff faces, rocks tumble down to the Dudh Kosi below, and once in a while the sound of dynamite echoes in the gorge.

A new road linking the town of Chaurikharka just below Lukla to the rest of the country is due to open by December 2022, and work is going on despite the pandemic.

Although the road will not enter the Sagarmatha National Park, which is a UNESCO World Heritage Site, it will make trekking and climbing in the Everest region more accessible. But it will turn Lukla airfield largely redundant, while locals fear an erosion of the region’s Sherpa culture, architecture and lifestyle.

On the Chinese side of Mt Everest, there is a highway from Lhasa right up to North Base Camp below the Rongbuk Glacier at 5,200m. Since 2016, it has become vital to transport goods and people for expeditions to the world’s highest mountain from the north.

Kathmandu is already linked through a 277km highway to Phaplu of Solukhumbu district, which is a two-day trek below Lukla. Work started on the 77km road linking Phaplu to Chaurikharka six years ago, but progress has been slow due to difficult terrain, delays due to the 2015 earthquake and Blockade, and lack of money.

This means that for at least the next two years, trekkers, climbers and local people will either have to trek from the nearest roadhead near Phaplu or Jiri-Shivalaya-Bamti Bhandar in Ramechhap district, or as many do, take a 30-minute flight to Lukla from Kathmandu.

Like all infrastructure projects in Nepal, completion of this road is delayed. Khumbu municipality has run out of money for the remaining 24km dirt track to Chaurikharka from Thamdada.

The completion of the road was the pet project of the former Chair of Khumbu Rural Municipality, late Nim Dorje Sherpa who died in June. He believed that connecting Phaplu to Lukla would further lift living standards, bring down prices, and reduce the drudgery of his Sherpa people.

“It’s still our top priority project,” says Lhakpa Tsheri Sherpa of Khumbu Municpality, adding that the construction has been delayed somewhat by the Covid-19 crisis which has also devastated the region’s trekking and climbing income this year.

Khumbu used to earn Rs200 million a year just from trekking and climbing fees, not counting what visitors paid for lodging, food and portering. This year, the income is down to Rs60 million.

“It is because of this loss of income that the construction of this last 24km stretch slowed down,” explained Binod Bhattarai, Chief Administrative Officer of Khumbu Municipality. “Now there is hardly any money to complete the project. We are struggling.”

The Municipality has decided to open Khumbu for trekking and climbing even though nine Covid-19 cases were detected in Namche Bazar last month, and it could have spread. Local people have stopped trekkers from going above Pangboche on the Everest Trail.

South of Lukla on Thamdada, bulldozers are at work on the track, while flights to and from Lukla buzz overhead all morning. The road alignment then drops precipitously to the river and Surke helipad below Lukla, before a final ascent to Chaurikharka.

Bhattarai is not giving up, he says: “The Province 1 government has assured financial support for this project, and other officials and MPs, too, have said that the work need not stop. So, we are hoping that we can make up for lost time.”

Not everyone in Khumbu is happy with the road. They think it will spoil the region’s pristine beauty and fragile culture, as has happened when roads have reached other parts of remote Nepal in recent years.

Sonam Gyalzen Sherpa from Namche, who is chair of the Sagarmatha National Park Buffer Zone Management Committee, says the economy has to be balanced with ecology.

“The Road will enter the boundary of the national park from Surke and it will surely have some adverse impact on local culture and nature,” he said. “But since the Khumbu is remote and needs a road we are trying to ensure that the EIA is carefully done and its recommendations are strictly adhered to. It will be a big challenge for sure. We are currently discussing how we can mitigate damage.”

However, there are also strong voices in support of the road. A cylinder of cooking gas that costs Rs1,500 in Kathmandu is Rs15,000 in Gokyo or Lobuje in Upper Khumbu. The cylinders have to be taken on a 12 hour truck ride to Phaplu, then transferred to mule trains that take several days to get up to Namche. Sugar, salt and other food items cost several times more than in Kathmandu.

“The road will surely make our life easier,” says Ang Jangmu Sherpa who runs a lodge in Debuje on the Everest Trail. “It will encourage more Nepalis to come trekking, and make certain goods such as cooking gas more affordable.”

Says Ang Rita Sherpa of Lukla’s Numbur Hotel: “Even if there is a road, most foreign trekkers are not going to travel to Lukla on a rough 14 hour road, but it will raise living standards in Khumbu.”

“With careful planning to reduce environmental impact and maintain the quality of the trekking experience, tourism in Upper Khumbu can benefit from the new vehicular road access to Chaurikharka,” says Sonia Miyahara, Managing Director of Hotel Everest View.Yaks and zopkyos carry goods up the Everest Trail near Namche Bazar. Locals hope the road to Lukla will make essential items cheaper.

Besides the lack of money, the road has several other terrain-related hurdles. A dozen bridges need to be built across the Dudh Kosi gorge with a big one in Orlang Ghat that will cost Rs80 million.

Locals lament that despite the central government bragging about Mt Everest and Khumbu as an adventure destination and collecting revenue from fees, it has not chipped in for the road project.

“The federal government has done very little to help despite us knocking on doors of various ministries,” said the Municipality’s Lhakpa Tsheri Sherpa.

Locals are hoping that even if the 10m wide highway is not fully completed, the track will allow trucks and jeeps to negotiate the final stretch by 2022.c

In Kathmandu, Infrastructure Minister Basata Kumar Nembang told Nepali Times that the federal government was committed to the project: “The Phaplu-Lukla road is one of the plans we have given high priority even in this pandemic situation. That road project will go ahead as demanded by local representatives.”

Whatever the arguments for and against the road, one thing it will do is remove the need for travelers to be stuck, sometimes for weeks in Lukla, due to bad weather.