The First Case of COVID-19 at Everest Base Camp 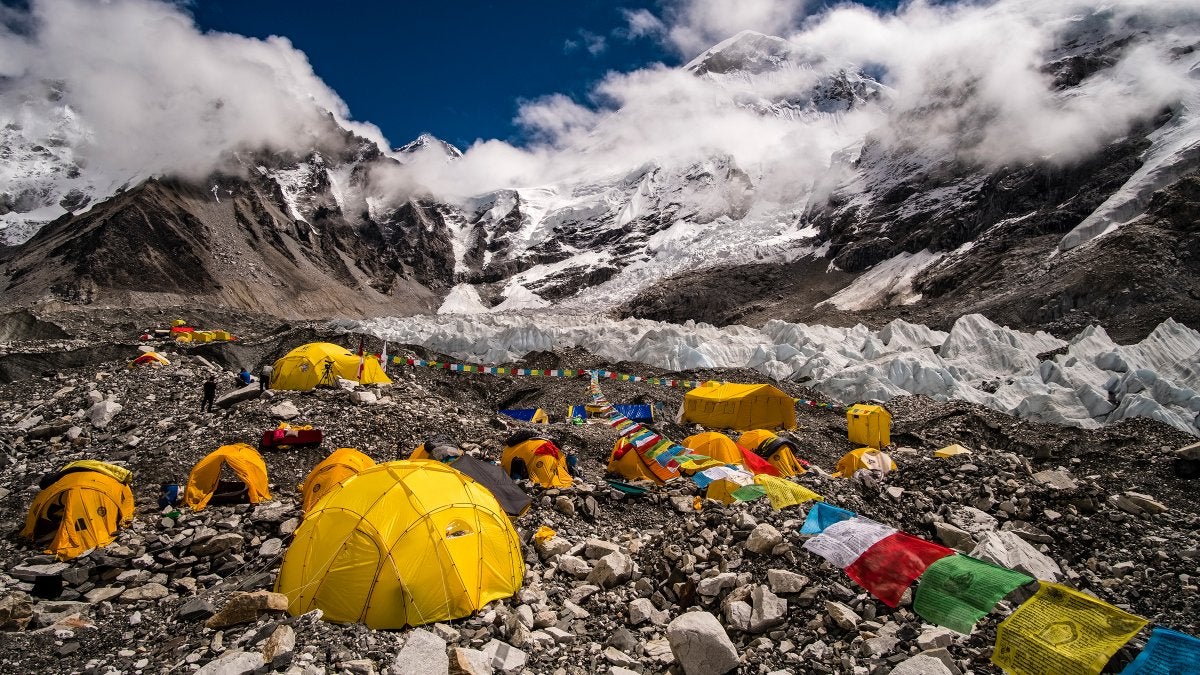 Hopes for an Everest season unaffected by the pandemic dimmed last week when the first member of an expedition at Base Camp tested positive for COVID-19, according to a source at camp who asked to remain anonymous.

The infected patient was originally thought to be suffering from high-altitude pulmonary edema (HAPE) and was evacuated by helicopter to a hospital in Kathmandu, Nepal. Upon arrival, the person tested positive for COVID-19. The rest of their expedition team then began quarantining at Base Camp.

While only a single case of COVID-19 has been identified here so far, an outbreak would have disastrous consequences. “When you’re sitting at Everest Base Camp at 17,600 feet, your immune system gets compromised because of the lack of oxygen,” Outside Everest correspondent Alan Arnette told us last spring when the virus cut the season short before it even started.

“Even a small cut on your finger doesn’t heal until you get back down to an oxygen-rich environment. I think the risks are really high, and people are taking a gamble if they climb.”

The virus threatens the summit aspirations of climbers, the economic security of Sherpas, and the health of both.

“Of course we are worried,” says Dr. Sangeeta Poudel, a volunteer at the Himalayan Rescue Association, a nonprofit that works to reduce deaths from acute mountain sickness in the Nepalese Himalayas. If there was an outbreak at Base Camp, Poudel says, “it would be an earthquake-like situation.”

The high elevation of Base Camp is particularly worrisome, as the virus could be masked by, or mistaken for, symptoms commonly caused by extreme altitude.

“With HAPE and COVID-19, we have a diagnosis dilemma, because they share symptoms,” says Dr. Suraj Shrestha, another Himalayan Rescue Association volunteer. Ambiguous symptoms include cough, a loss of appetite, and shortness of breath, all commonly experienced at high elevation.

Doctors at Base Camp have already arranged seven emergency evacuations, including some for multiple cases of HAPE. But because they aren’t able to test for COVID-19 at Base Camp, they don’t always feel certain in their diagnoses.

As of now, the teams on the mountain are feeling cautious but unfazed by a single positive test result and are going forward as normal. While some initially expected a quieter climbing season this year, the government has issued 338 permits, almost as many as usual. Masks are worn sporadically at Base Camp, and social-distancing protocols vary widely among expedition companies, with a few imposing strict isolation and others more or less carrying on like a normal year.

“The camp is as big as 2019, there is no difference,” says Noel Hanna of Northern Ireland, who is at Base Camp for his third time. “Everything seems to be the same.”

Most foreigners had to present a negative COVID test result upon arrival in Nepal. The government also requires a quarantine period and a second negative test after arrival, but these rules appear to be largely self-enforced.

Many individuals and expedition companies seem to have followed the rules, albeit some more seriously than others. A fair share of the foreigners claim to have received a vaccination, allaying concerns to an extent, but most Sherpas, who travel down the mountain and to Kathmandu more frequently, have not.

Luckily, Nepal has seen a relatively low COVID infection rate since early January. In Kathmandu, many people wear masks, and life mostly goes on as usual. However, cases are starting to trend upward. Particularly worrisome is the skyrocketing number of cases in India, which shares an open border with Nepal.

Yet there is a fair amount of optimism for a successful climbing season. Doctors and expedition leaders hope that the single known case has been contained. And at the end of the day, for many summit hopefuls, the coronavirus is just one more danger on a dangerous mountain.