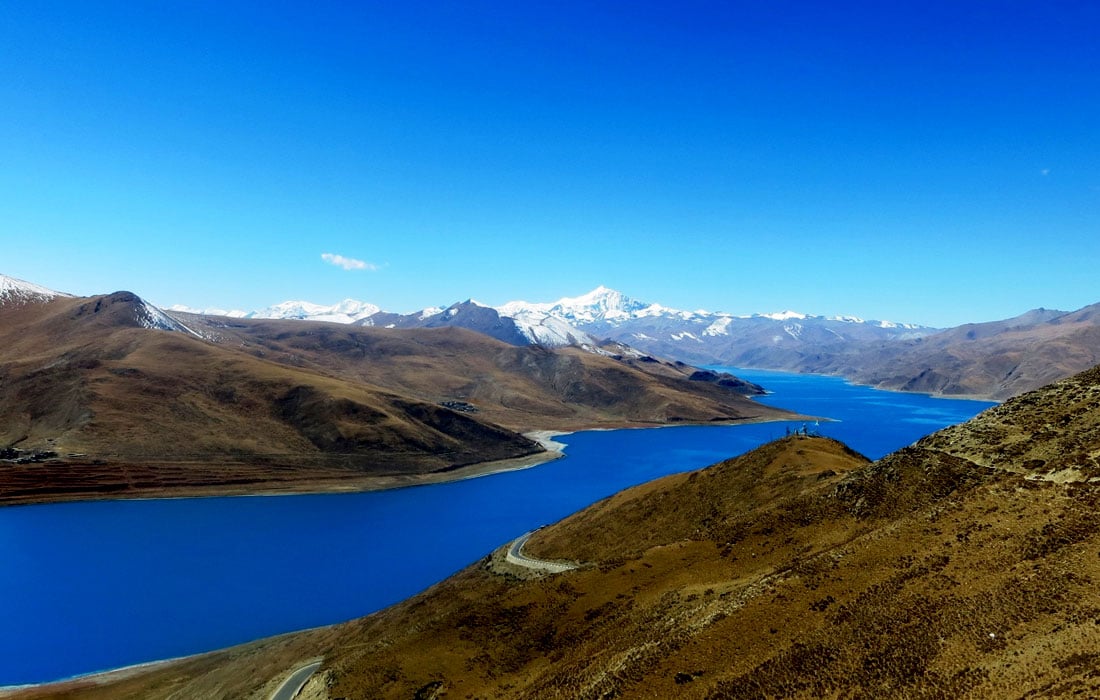 The Lhasa and Yamdrok Lake Tour cover the famous landmarks in Lhasa city and a scenic ride to Yamdrok Lake, which is renowned for its spectacular setting, with rugged mountains surrounding it. This cultural city tour is suitable for all age groups and doable all year round.

This exquisite tour comprehends the major historic sites of Lhasa city like Potala Palace, Jokhang Temple, Barkhor Street, Drepung, and Sera Monastery. In addition, you'll make a day trip to Yamdrok Lake, which is one of the three holy lakes in Tibet, along with Namsto and Mansarovar Lake. The major attraction of the Lhasa and Yamdrok Lake Tour is an additional exciting trip to sacred Yamdrok Lake to spice your visit to holy Lhasa city.

You'll embark on 5 days- Lhasa and Yamdrok Lake Tour, starting with two days of sightseeing tour in Lhasa before hitting the road to Yamdrok Lake. Your first visit is to Potala Palace, which is the UNESCO world heritage and the winter residence of Dalai Lama. You can explore the mansion of the former Dalai Lama and his meeting room and religious chamber. Moreover, you'll also embrace the stunning bird-eye view of Lhasa city from the top of Potala Palace.

Lhasa city is the epicenter for Tibetan Buddhism indeed! The holy Jokhang Temple provides you a glimpse of notable Tibetan cultural and rituals practices of Tibet. You'll see the statue of Buddha Sakyamuni at the age of twelve. You can even go up to the roof of the temple to admire the panorama of gorgeous Lhasa city and Potala Palace. Outside the temple, you can do kora by circling the old famous Barkhor Street with the locals and pilgrims. You can do some souvenir shopping too.

Moreover, other great places to visit in Lhasa are the two important monasteries that are Drepung and Sera. In Drepung, you'll get to explore the monastery, assembly hall, and the statue of Buddha, with Dalai Lamas. In the past, it used to be the world's largest monastery with about 10,000 monks. Your next stop is Sera Monastery which lies around 5km north of central Lhasa. It is also one of the three best-known university monasteries of Lhasa and is famous for its unique Buddhist debates.

After spending a wonderful time in Lhasa, you'll take a scenic drive over the 4,500m mountain pass of Kamba La to the turquoise-colored Yamdrok Lake, one of the beautiful lakes in the world. This pass is the ideal place to get the best scene of the lake with the snowy peaks in the background. The backdrop of the Yamdrok Lake is utterly attractive; you'll view the mighty mountain named Nojin Kangtsang, also known as Mt. Nyenchen Khangsar.

Yamdrok Lake is one of the most pleasant lakes in the world, thanks to its unique color and breathtaking setting. According to local mythology, the turquoise jewels of a goddess earring formed this lake. This goddess scattered the jewels toward earth for the Tibetans. So, the shape of this widespread lake is an earring. Also, there is a saying that after the death of the Dalai Lama, senior monks chant, pray, and throw holy objects into the water to gain the reflection of the specific location of the deceased Dalai Lama's soul. Thus, with an awe-inspiring landscape, you'll also have a wonderful spiritual treat. Every year many pilgrims from all over the Tibetan regions visit the lake.

Likewise, it is a beautiful freshwater lake, the water is crystal clear, and you may spot some fish that live and breed here in the lake. The color of the water varies depending on the position and intensity of the sun. You'll have a good shot of bird watching along the bank of the lake since there are various bird species such as pigeons, yellow ducks, cormorants, swans, and bar-headed goose.

Yamdrok Lake is a complete package of perfect picturesque scenery. It offers a unique natural scenic area of lakes, snow-capped mountains, islands, pastures, temples, wildlife, etc. After spending a memorable time and relishing the beauty of the lake, you'll drive back to Lhasa. Finally, this five days of classic Lhasa and Yamdrok Lake tour ends, and you'll depart from Lhasa with tons of amazing and unforgettable memories!

Yamdrok Lake Tour
Our guide was too friendly to go on an adventure with, no less than a friend! He was extremely attentive, gave us the right balance of information and...

Tashi Delek! Welcome to Tibet- Lhasa, the land of Gods!

Upon arrival at Lhasa airport, meet our Tibetan guide, who will help you get through the terminal and transfer to the hotel. You'll take an hour-long drive along the riverside to Lhasa. Check in to the hotel, take a rest, and adjust yourself to the high altitude of Tibetan altitude. 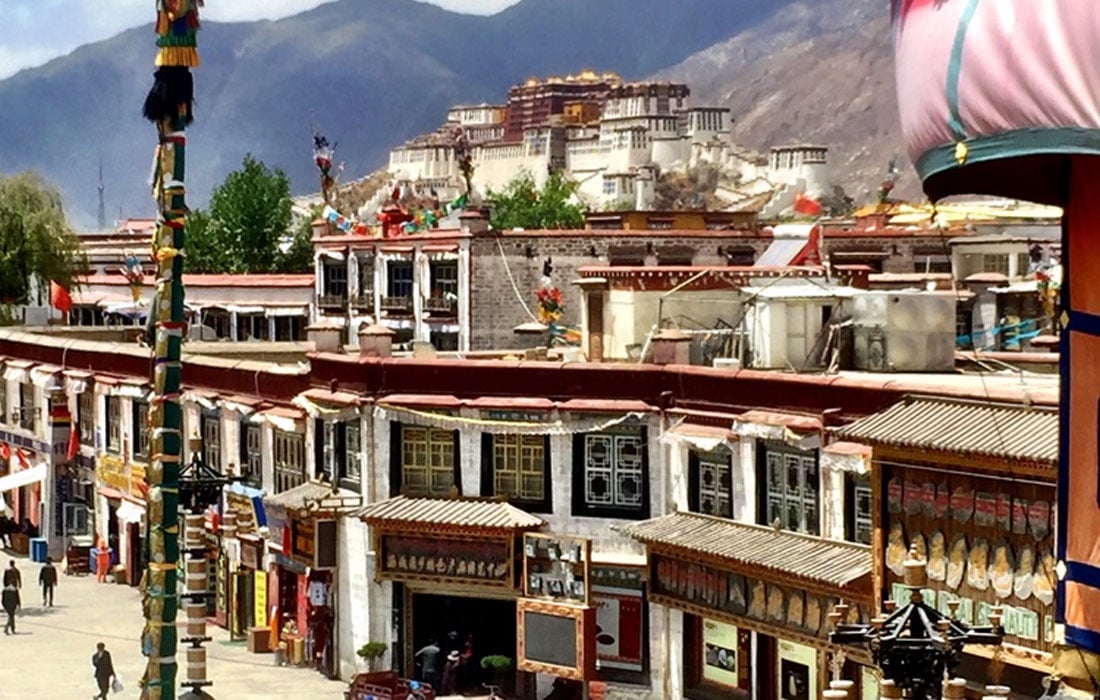 Get your early start for the Lhasa Tibet tour. One of the fascinating sites in Lhasa is the tremendous religious and administrative sites of Potala Palace. You will head towards Potala Palace, one of the most prominent landmarks of Lhasa and Tibet. Palace also once served as the winter palace for past Dalai Lamas. It contains two parts; the Red Palace and White Palace. After visiting this palace, you'll get a good sense of the traditional architecture of Tibet. Further, the well-preserved artworks and different religious treasures are the main highlights of Potala Palace.

After you visit Potala Palace, you'll proceed towards Jokhang Temple, a spiritual center of Tibet. You'll get to admire the holiest statue of Buddha. Around the monastery, there is Barkhor Street, famous as the shopping hub for traditional Tibetan handicrafts, silvery handmade jewelry, etc. You can even enhance your experience by indulging your taste buds in traditional Tibetan cuisines such as Tsampa, Yak butter tea, Tibetan sweet tea, Tibetan noodles, and Yogurt. Completing your sightseeing, you'll get back to the hotel. 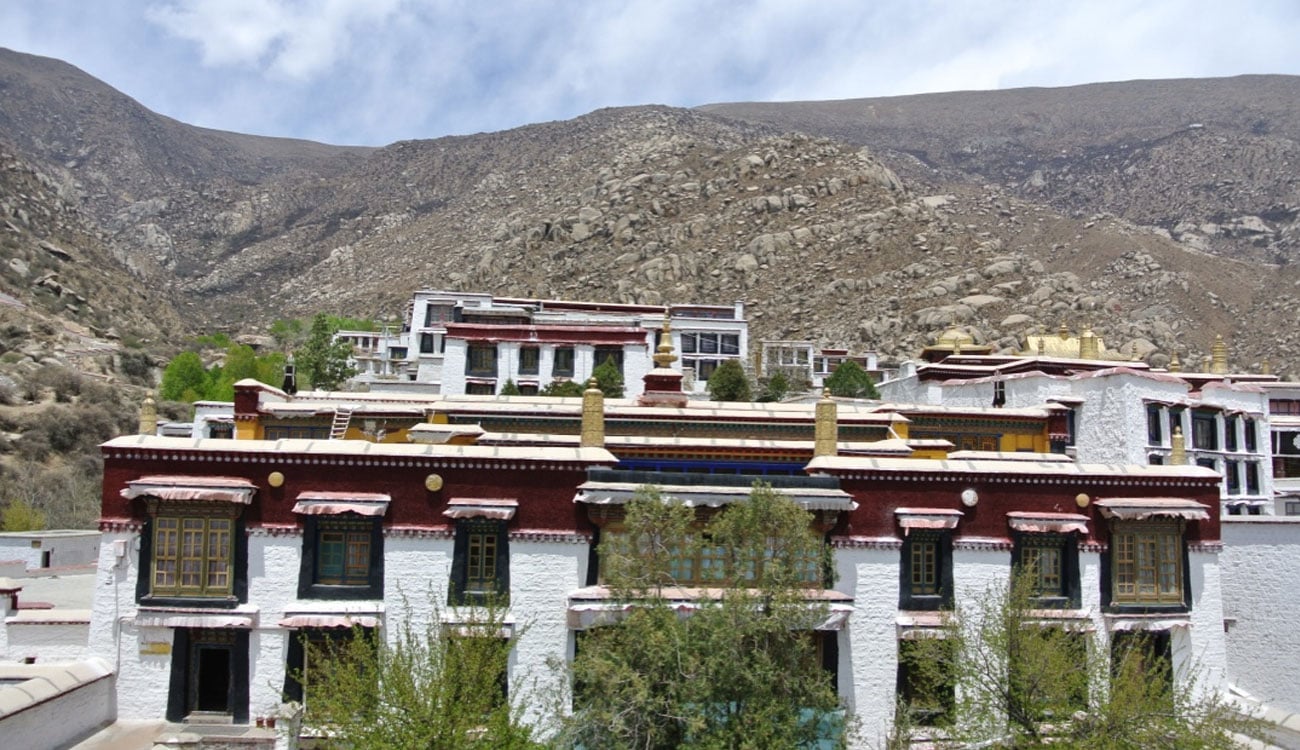 Early morning grab your hearty breakfast and visit two important monasteries in Lhasa; Drepung and Sera. Jamyang Choeje founded Drepung Monastery in 1416. It is also one of the largest monasteries in Tibet. Stands at the foot of Mt. Gebeiwoze, it was home to more than 10,000 monks. While strolling around the monastery, you'll notice the biggest monastery kitchen. You'll also visit the Buddhist Sculpture carving near the monastery of Drepung. From the top of the monastery, you'll get an outstanding view of the entire Lhasa city with a backdrop of snow-capped mountains.

Afterward, you'll visit the Sera Monastery; Tsongkapa built this monastery in 1419. There is also a colorful rock painting of Buddha and the three Sand Mandalas which will grab your attention. Then you can visit the Tibetan religious text printing house too. The most exciting thing is to see monks debating sessions in the courtyard. For centuries, it has been the center for the extension of Buddhist Dharma and the enlightenment of many Buddhist Masters. After attending the more formal discussions and warmer debates related to Buddhist scriptures, you'll get back to your hotel.

An exciting day awaits you today! Get ready, and after having a hearty breakfast, you'll head towards Yamdrok Lake that lies in Nangartse County, Shannan Prefecture. It is about 170 km from the southwest of Lhasa, the capital of Tibet.

On the way to the lake, you'll see the free-flowing Yarlung Tsangpo River and many small settlements. Along the route, you'll pass through the Kamba La Pass (4,794m). You'll make a short stop here to admire the captivating sight of mesmerizing turquoise Yamdrok Lake. You can snap photographs of the turquoise waters of the brilliant lake. In addition, you'll also get the stunning scenery of Mt. Nyenchen Khangsar, which is one of the sacred mountains of Tibet.

Then after embracing a bird's eye view of the mesmerizing Yamdrok Lake from the Kamba La Pass, you'll drive towards the lake's shore to enjoy the close-up panorama of deep blue water. Lake Yamdrok changes its color with the light of the sun from deep blue to turquoise and aqua green. The water of the lake is crystal clear, and you'll spot some fish that live in the lake.

Vast pasture lands surround the lake so that you may witness some herd of local sheep grazing on the lake's shore. Likewise, this place is famous for birdwatching too. The sight of thousands of migratory birds flying around and over the lake is absolutely astounding! You'll also get an opportunity to see the Tibetan Mastiff, one of the most beautiful and expensive dogs in the world. After exploring Yamdrok Lake, you will head back to scenic Lhasa city.

Finally, today your Lhasa and Yamdrok Lake Tour ends! After breakfast, you'll check out from the hotel, and your Tibetan guide will escort you to the airport to connect the flight for your onward destination. Likewise, you can also opt for extending your Lhasa Tour with a cultural sightseeing tour in Tibet and even neighboring countries such as Nepal, India, and Bhutan.

United Kingdom
Nov 24, 2018
Yamdrok Lake Tour
Our guide was too friendly to go on an adventure with, no less than a friend! He was extremely attentive, gave us the right balance of information and free time, was extremely knowledgeable about Buddhism and its history--as well as had a wealth of knowledge/information in regards to all of the sites that we visited. He managed everything perfectly. In just 5 days, we explored Potala Palace, Jokhang Temple, Barkhor Street, Drepung monastery, Yamdrok Lake, and many more. Every day offered us the beauty of Tibet country. Our tour was more than we expected. Highly recommended team.
Book With Local - Total Flexibility