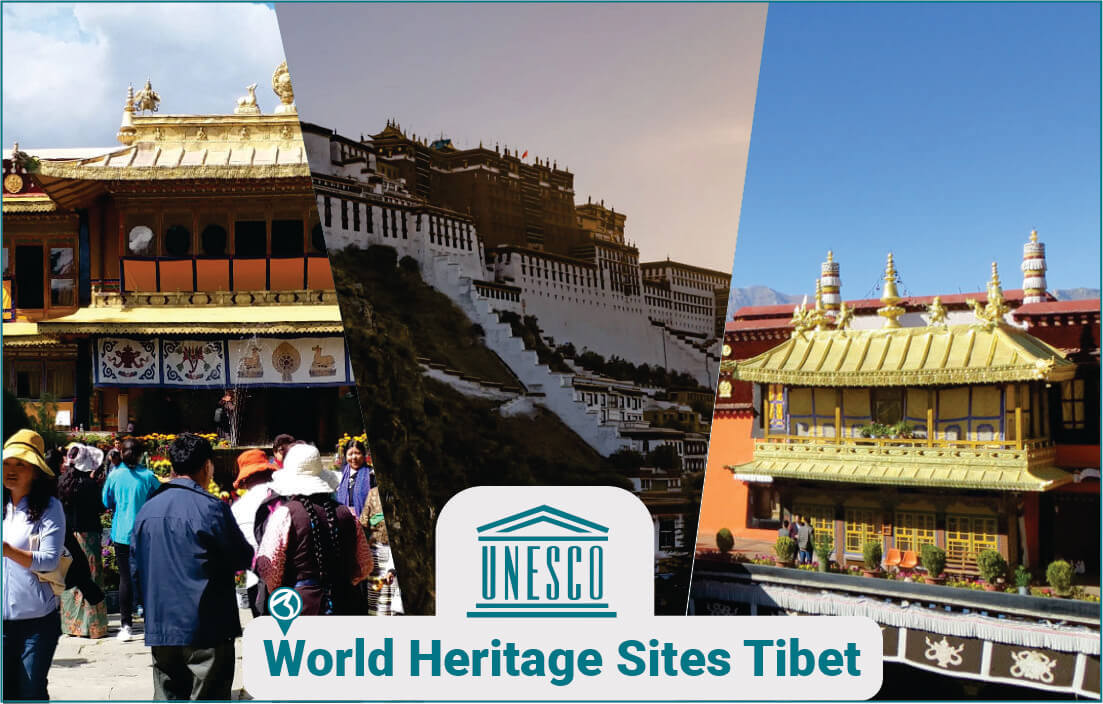 Tibet, the highest region on Earth, is one of the most beautiful countries in the world. And for travelers Tibet is one of the popular travel destinations in Asia, boasting 3 UNESCO-listed World Heritage Sites, all in the beautiful city of Lhasa. Tibet welcomes travelers into a unique and magical world filled with beautiful monasteries, high mountains, sacred lakes, enticing culture, and an eccentric lifestyle.

Tibetan culture dating back to the seventh century in particular awe most of the travelers. For most travelers, “Tibet” conjures up the images of beautiful heavenly sight of mountains and sacred lakes and POTALA PALACE. Potala Palace is one of the three UNESCO World Heritage Sites in Tibet, calling thousands of travelers. This palace at 3,700m in Lhasa is a prominent landmark in Tibet. And Norbulingka and Jokhang Temple are the other two world heritage sites. In this blog, we will be exploring these three sites. 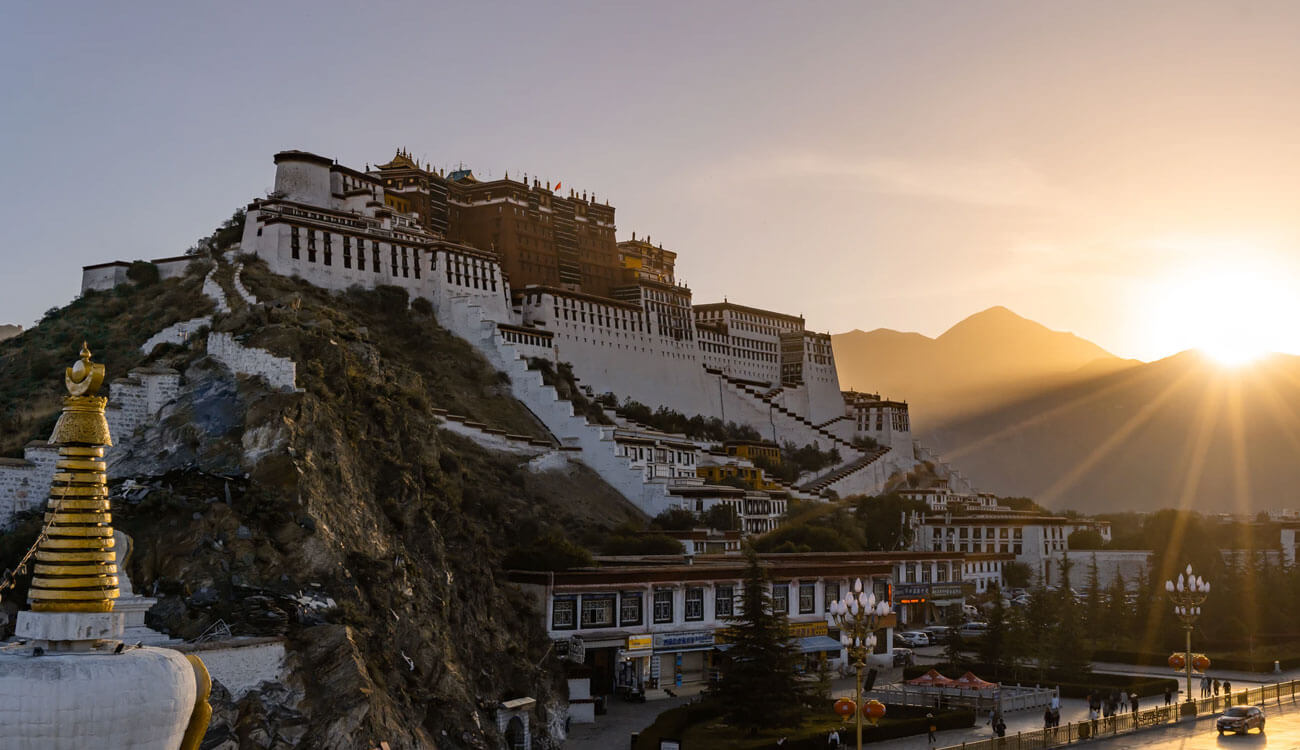 Anyone visiting Tibet definitely explores the marvelous Potala Palace; there's no doubt. Just like we think of Everest or Everest Base Camp when someone talks about Nepal, in that very sense, Potala Palace pops up magically in mind when someone says, Tibet. Potala Palace is one of the three UNESCO World Heritage sites in Tibet. Perched on the side of Ri Marpo in the center of Lhasa, Potala Palace is the greatest monumental structure in all of Tibet. Jokhang Temple and Barkhor Street are the two prominent landmarks in close proximity to Potala Palace.

The 13-story palace building covers an area of over 100,000 square meters and houses temples, palaces, dormitories, office areas, and more than 1000 rooms. In 1994 this site was declared one of the World’s Culture Heritage by UNESCO. For its location, physical beauty, Tibetan history, this palace is also considered one of the wonders of the world. The structure of the palace rises above the rocky base, and the gilded roof touches the sky.

Potala Palace is one of the holiest landmarks in Tibet and is the highest castle in the world. The first king of Tibet, Songtsen Gampo, built the palace in 631 AD. History has it that the first palace was built for military purposes. After 200 years of its completion, the palace suffered destruction due to a lightning strikes and several other reasons. The palace has two wings: Red Palace in the east and west and White Palace in the middle.

Inside the palace are Murals, Thangkas, Dalai Lama stupas, scriptures, and sculptures from the 7th century. Just before it was turned into a museum by the government, it used to be the winter palace of the Dalai Lama. Today it is a major pilgrimage site for Tibetan Buddhists and a major tourist attraction for travelers. To enjoy and admire the best view of the palace, make sure to see it from distance, far enough to behold a panoramic view of the site. Please note that cameras and smartphones are not allowed inside the palace.

If you are planning to explore the palace, you will have to fly to Lhasa Gonggar Airport, the busiest airport in Tibet. From the airport, it is approximately 60 km to the palace. The best way to get there is traveling by airport shuttle bus at the gate of the Civil Aviation Administration. You can also travel via private car, bus or taxi. In case you miss the shuttle time, you can always opt for a taxi. It will take about an hour to reach the palace from the airport. The most popular choice among travelers is a shuttle bus, as it is cheaper.

Recommended Read:  How to Travel to Tibet? 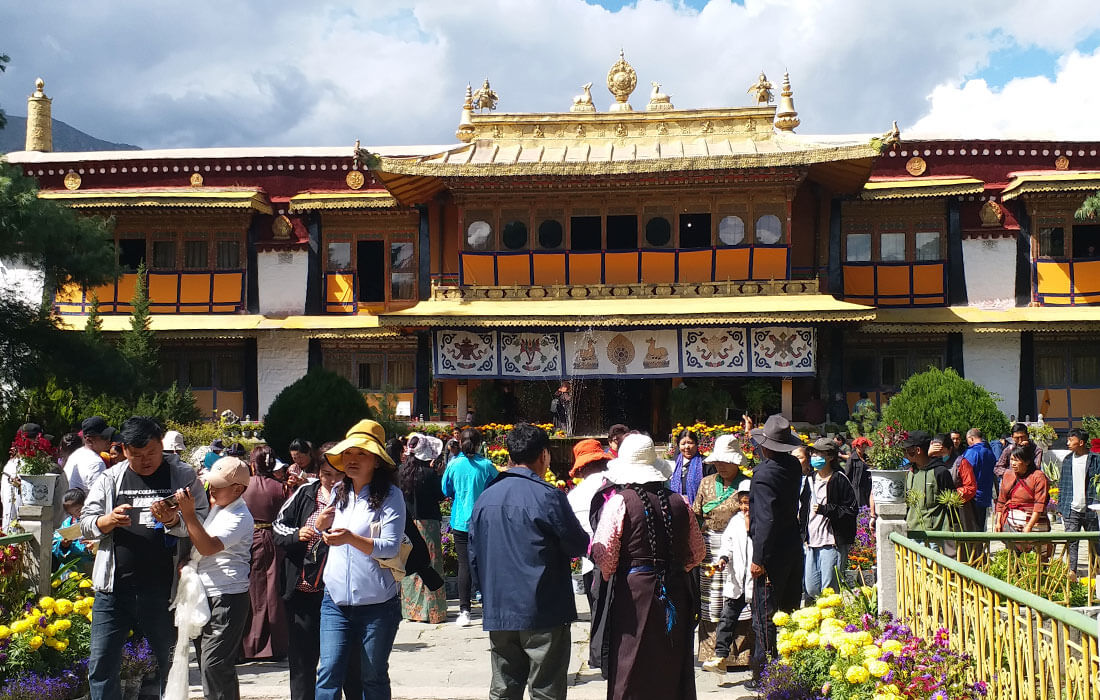 While Potala Palace was the winter palace of Dalai Lama, Norbulingka was his summer palace. Built in 1755 (completed in 1783), Norbulingka is perched on the west side of the capital city of Lhasa, within walking distance from Potala Palace. It is considered to be the largest man-made garden in Tibet. In the Tibetan language, Norbulingka means “Treasure Garden.” Norbulingka houses 374 rooms, four palaces, a monastery, numerous halls, 30,000 cultural relics and pavilions, and a beautiful flower garden brimming with luxuriant plants that are rare in Tibet.

During summer and autumn, the park in Norbulingka serves as a hub for festivals and entertainment. The Sho Dun Festival, also known as the Yogurt Festival is held annually at Norbulingka. Arguably, Norbulingka is the most popular garden in Lhasa and has earned the epithet ‘world's highest, largest and best-preserved ancient artificial horticultural garden.’ It is also popularly known as the "Plateau Botanic Garden."

On 14 December 2001, Norbulingka was designated a UNESCO World Heritage Site. Norbulingka along with Potala Palace and Jokhang Temple Monastery is the historic ensemble that covers three monuments in Tibet. Norbulingka was built about 100 years after the completion of Potala Palace. It was built with the great purpose of serving the Dalai Lama in the summer season; this palace served as a summer residence of Dalai Lama from the 1780s until his exile in 1959. Kalsang Podrang, the oldest palace, built for the 8th Dalai Lama is one of the major attractions of Norbulingka. One of the historical significance that attributes to Dalai Lama is that he fled to India from the palace on 17 March 1959. According to Reuters, “The Dalai Lama rode out of the city on horses to join his family in India.”

Norbulingka is only 3 km away from Potala Palace. Once you land at the Lhasa airport, you can hire a taxi or hop on a bus Norbulingka. It is an hour's ride to the palace from the airport. The cheapest option is to travel via airport shuttle bus. Hiring a taxi or car is expensive in comparison to the bus. 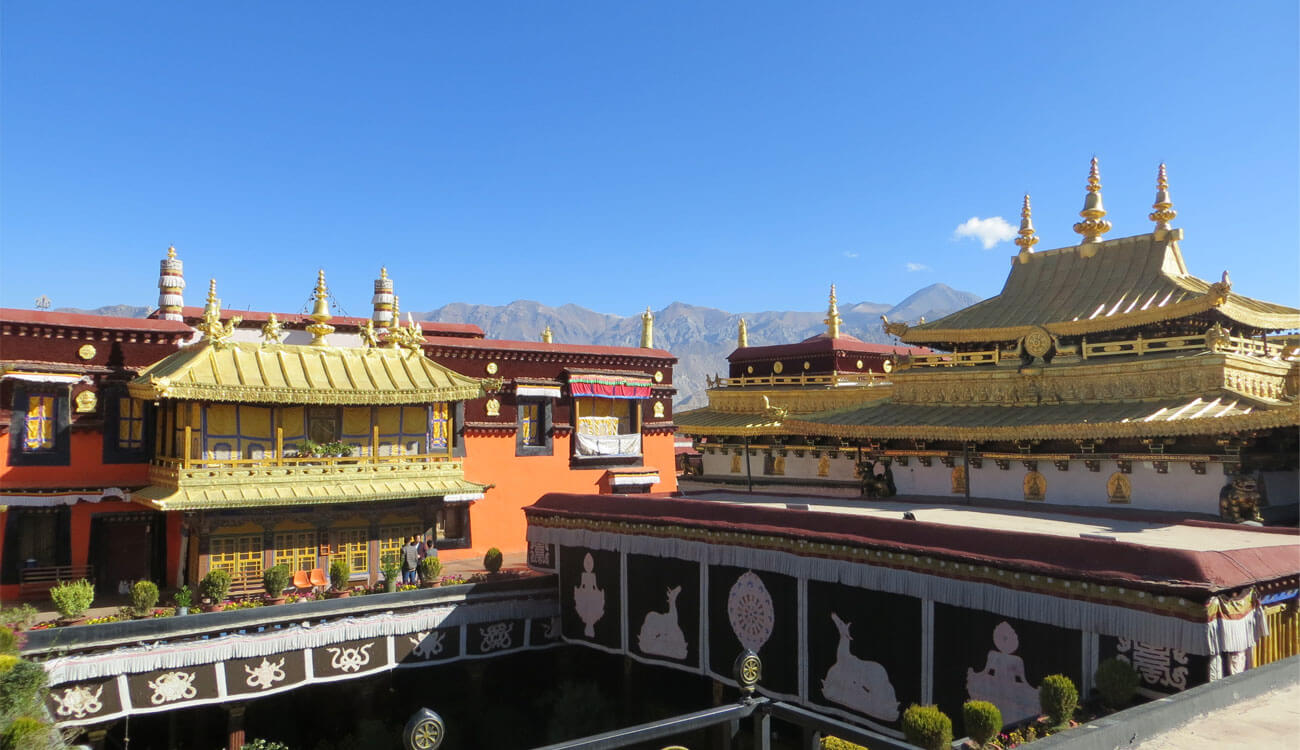 The Jokhang, also known as Jokhang Monastery, or Jokhang Temple, is the holiest temple in Tibet. Run by the Gelug school of Buddhism, Jokhang was established during the 7th century. Perched in the Barkhor Square in Lhasa, this site is considered the most sacred and “the spiritual heart of the city.” Originally, the temple was built to house important Buddhist statues and images-the two statues of Jowo Sakyamuni Buddha and Akshobhya Buddha- brought from China and Nepal to Tibet by King Songtsen Gampo’s wives.

After his death in 649 AD, both the two statues were transferred to some other places. In 2000, Jokhang was designated a UNESCO World Heritage Site and is listed in the first group of State Cultural Protection Relic Units. Today, the temple welcomes hundreds of pilgrims and tourists every year. However, tourists are supposed to visit the temple in the afternoon; morning time is reserved for pilgrims.

Being one of the crowning jewels of Tibet, Jokhang is the major tourist attraction in Tibet. You can visit this site all year round, but the best time to visit is in summer and autumn. The life-size image of 12-year-old Jowo Sakyamuni is the prominent highlight of Jokhang. The sacred Jowo Sakyamuni Buddha in the temple is considered the paramount relics revered by millions of pilgrims. The Barkhor Street nearby the temple is yet another attraction most travelers do not wish to miss. The lively street features Tibetan culture, art, and religions in every corner. In general, travelers who visit Potala Palace definitely explore this temple. Like we said earlier, please make sure to visit this temple in the afternoon. Some travelers call this temple a “FAIRY-TALE BUILDING” and you will feel the same once you visit this beautiful place in Lhasa.

Jokhang Temple lies 2km east of the Potala Palace. To get there, you must fly to the beautiful city of Lhasa. After landing at Lhasa airport, you can directly head to the temple by car or bus. It will take about an hour to reach the temple. Please remember to visit the temple in the afternoon. If you reach there early, you can explore Potala Palace.

Potala Palace, Norbulingka, and Jokhang Temple are the three UNESCO World Heritage sites in Tibet and the major tourist destinations attracting thousands of travelers from around the world. As you know, all these three sites are in the capital city of Lhasa. That means you can explore all these sites in a span of a couple of days. These sites offer an exciting cultural tour of Tibet.

Looking for more information for your trip to Tibet? Here is a collection of articles about Tibet that might help you with your trip planning: