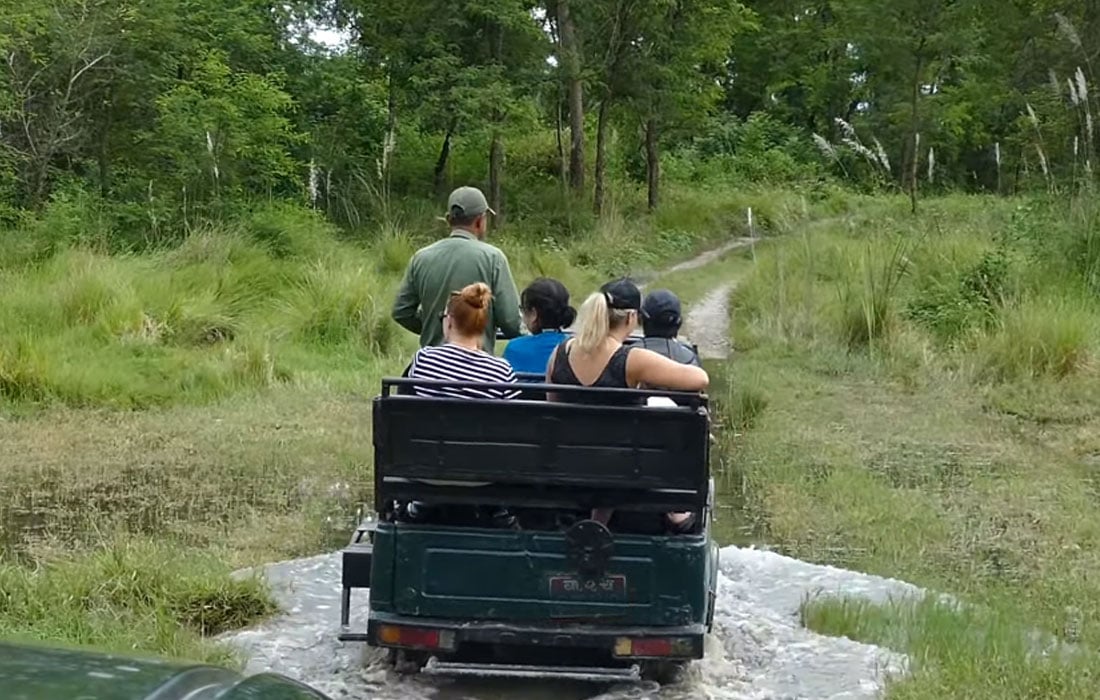 In the deep south of Nepal, where the land is flat and the air is hot, Shere Khan paces like a shadow through a real-life Jungle Book. Actually picking the best national park in Nepal to visit with a family then that’s easy Chitwan.

There are three main national parks and reserves in southern Nepal – Chitwan, Bardia and Koshi Tappu – and in the first two children and parents alike can set out on a safari to thrill in the discovery of tiger tracks, cower at the sound of a big cats throaty growl and be elated when, finally, out of the gloom steps the tiger of Jungle Book fame, Shere Khan.

As well as top predators, Chitwan and Bardia also host large numbers of elephants, one-horned rhinos, which look like they’re wearing a suit of armor several sizes too big, masses of squabbling monkeys and huge flocks of rainbow-colored birds. Oh, and talking of birds, if your children are budding ornithologists then Koshi Tappu is less known for its large mammals but is renowned for its impressive birdlife.

As amazing as a family safari in Nepal is, many people reading this might think that taking children deep into a jungle bursting with large, toothy creatures is loaded with risks, but the truth is there are few safety concerns. But, before you and your family can get gooey over mummy elephant and her babies there are a few things you need to consider to ensure that your family safari in Nepal really is an experience you’ll all talk about for years to come.  See also: Family Holidays In Nepal: What You Need To Know

In the following article we try and answer some of your most frequently asked questions about a Nepalese family safari and give you a few safari savvy tips. 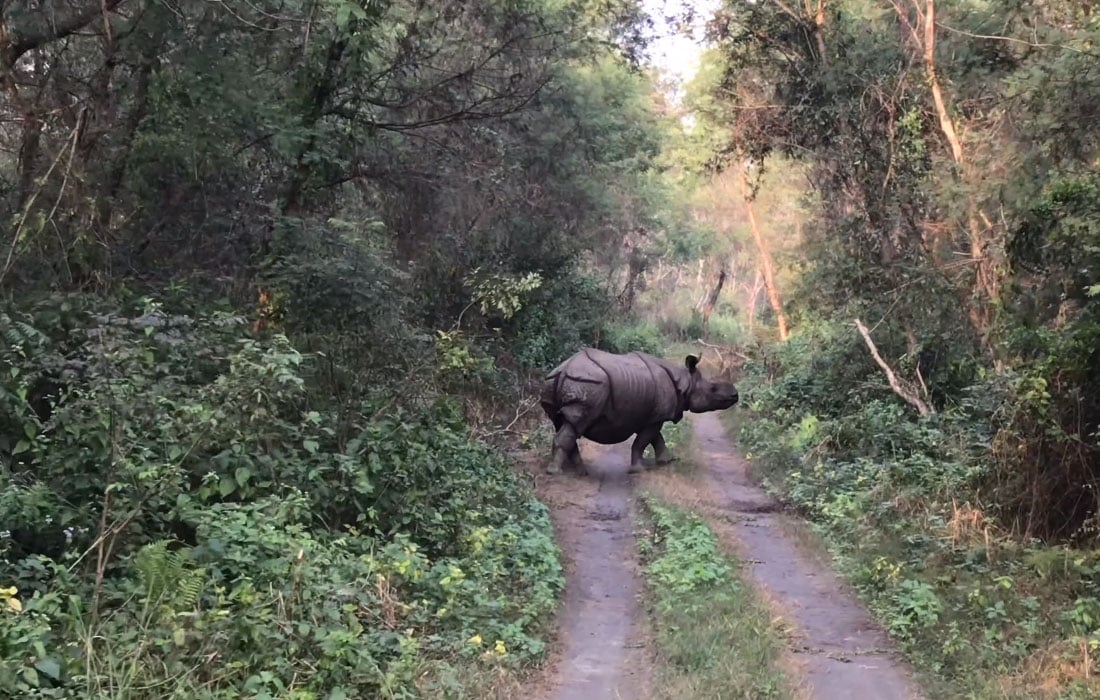 #1. What’s the best national park in Nepal for a family safari?

When it comes to actually picking the best national park in Nepal to visit with a family then that’s easy. Chitwan, It’s the most accessible (you can even fly from Kathmandu to the town of Bharatpur about a half-hour drive from Chitwan), has the best tourist facilities by a long way including plenty of safari lodges and hotels suitable for children. And, most importantly, it has the densest concentration of megafauna of all the parks and is the place where animals are the least spooked by the presence of people.

#2. Is it safe to bring children on safari?

Put simply. Yes. It’s very safe taking children on a safari. In fact, it’s probably one of the safest things you can do as a family in Nepal. Having said that, with younger children it’s important to keep a watchful eye on them to avoid them wandering off all alone in search of leopards, but otherwise, there are very few health and safety issues to take into account.

#3. How old should children be to go on a safari?

Although many parents are keen to show their children the wonders of the South Asian wilds at the earliest possible age it really isn’t worth the expense and hassle if your children are below the age of about 5. We first took our children on a safari when they were just 18 months and 4 years of age. The oldest has only hazy memories of it, while the younger one doesn’t remember anything about it. We’ve since been on further family safaris and now that they’re much older (ten and seven years old) they enjoy it far more and remember everything they see.

Being on a safari in Nepal means spending a lot of time sat quietly in a vehicle listening and waiting for animals to appear. If you’re a parent then we hardly have to tell you that after about 35 seconds most children struggle with this task and the younger your kids are the harder they struggle. Taking this into account we wouldn’t really suggest taking children below the age of 8 or 9 on a safari.  From this age they can appreciate all they are seeing and doing and will get as much enjoyment out of watching the wildlife as you will.

#4. Will we be able to stay in family rooms?

Chitwan has a huge range of accommodation in all price categories and of all types. There are budget doss houses, comfortable family-run hotels and divine, upmarket safari lodges and camps with superb in-house naturalists. Most rooms are designed just for couples, but most places do have a few family rooms or tents which normally comprise of interconnecting rooms. If a place doesn’t have dedicated family rooms then they might be happy to put an extra mattress on the floor.

Keep in mind that some of the very upmarket places might not accept younger children. Bardia and Koshi Tappu have much more limited accommodation although both still have a few places suitable for families. Even if you’ve been traveling around the rest of Nepal as a family on a budget then if you can we would recommend splashing out in the national parks on a top-notch safari camp. The facilities and the entire experience (including the actual safaris) will be so much better at such a place and these camps tend to devote some of their profits to protecting the environment you’ve come so far to enjoy.

#5. Do we need to take precautions for malaria and dengue fever?

Malaria and dengue fever occurs in these hotter, lower altitude parts of Nepal, but in general, it’s rare. If you’re visiting in the dry season (the only real-time to go on a Nepalese family safari) then you likely don’t need to take any anti-malarial drugs (no such thing exists for dengue), but you should make sure that your children are always well slathered in insect cream and in the evenings you should all wear long-sleeved tops and trousers (or ankle-length skirts). Always sleep under a mosquito net.

#6. What about the safari vehicles?

On a safari, you will normally be expected to share a safari vehicle with other people. This should be fine if you’re children are teenagers, but if you have younger children then without question you should hire a vehicle on an exclusive basis. All safari companies and camps can do this. Not doing this, and trying to put your children in a safari vehicle with other people whom you don’t know, will only lead to a very stressful safari for everyone involved as other paying clients are unlikely to want to compromise their safari experience for the benefit of your children.

#7. What time of day should we go on a family safari?

Safaris normally take place very early in the morning and late in the afternoon. For most people, the best time to go on safari is at dawn. It’s still cool and animals are at their most active.

However, in our experience, shorter evening safaris are much better with kids. There’s no dragging them out of bed in the pre-dawn light and then dealing with tired children for the rest of the day. It gets cooler rather hotter as the safari progresses and as it cools down the animals become more active again. Afternoon safaris also tend to be shorter (two hours is normally about all most kids want to do).

#8. Is there a best time of year to go on a Nepalese family safari?

The best, in fact pretty much only time of year, to go on a family safari in Nepal is the dry season between October and late April. It’s hot in the Terai lowlands where Nepal’s parks are located so the somewhat cooler months of December to February are ideal.

However, as the year heats up in April and early May the animals are drawn closer and closer to remaining water sources and so are easier to see. But, it can get painfully hot and many children (and adults) will find a safari in late April more of an ordeal than a pleasure. Avoid the June to September wet season.

#9. What should we take on a family safari in Nepal?

A few important things that everyone – child or not – should take on a Nepalese safari. 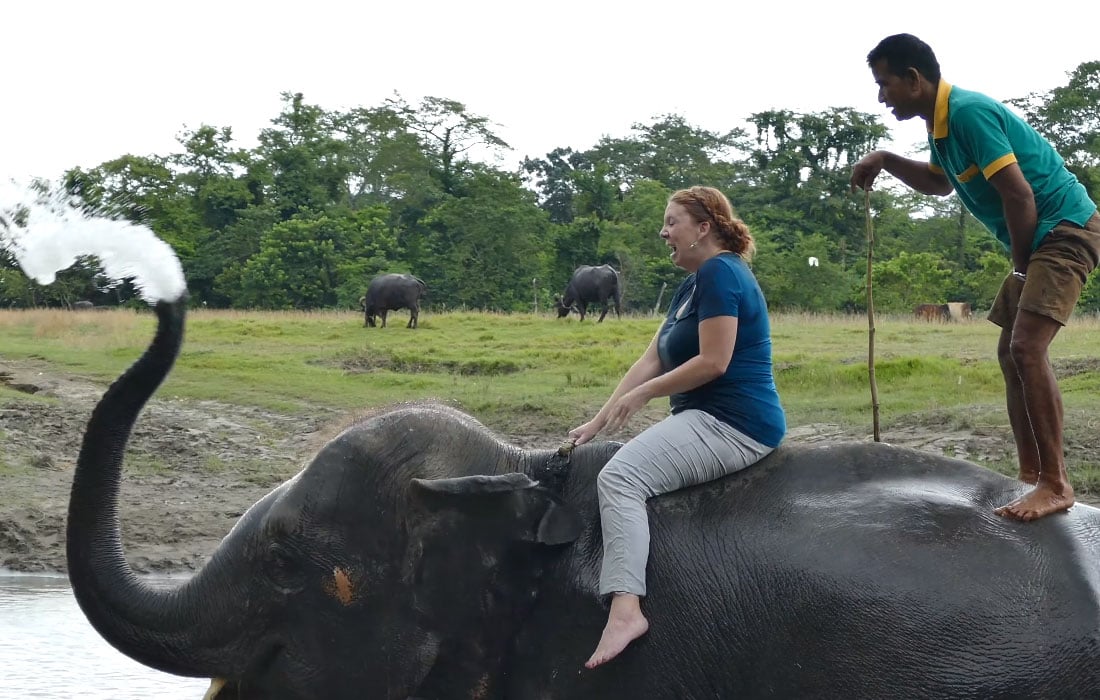 If you’re going to spend a couple of days around Chitwan or one of the other parks then we’d recommend breaking the day up. Even the most animal-obsessed youngster will quickly tire of long jeep safaris on bumpy roads.

So, mix the safaris up with some of the many other activities on offer around Chitwan (and to a lesser extent other parks). These include walking safaris, canoe trips and village visits. Chitwan also offers elephant rides but animal rights groups strongly suggest that tourists avoid such activities due to the stress caused to the elephants.

Okay so we said we’d give you ten top family safari tips, but because we’re kind-hearted souls, here’s a bonus tip…. Make sure the children go to the toilet before setting out on a safari. Bears can s*** in the Nepalese woods but children cannot!