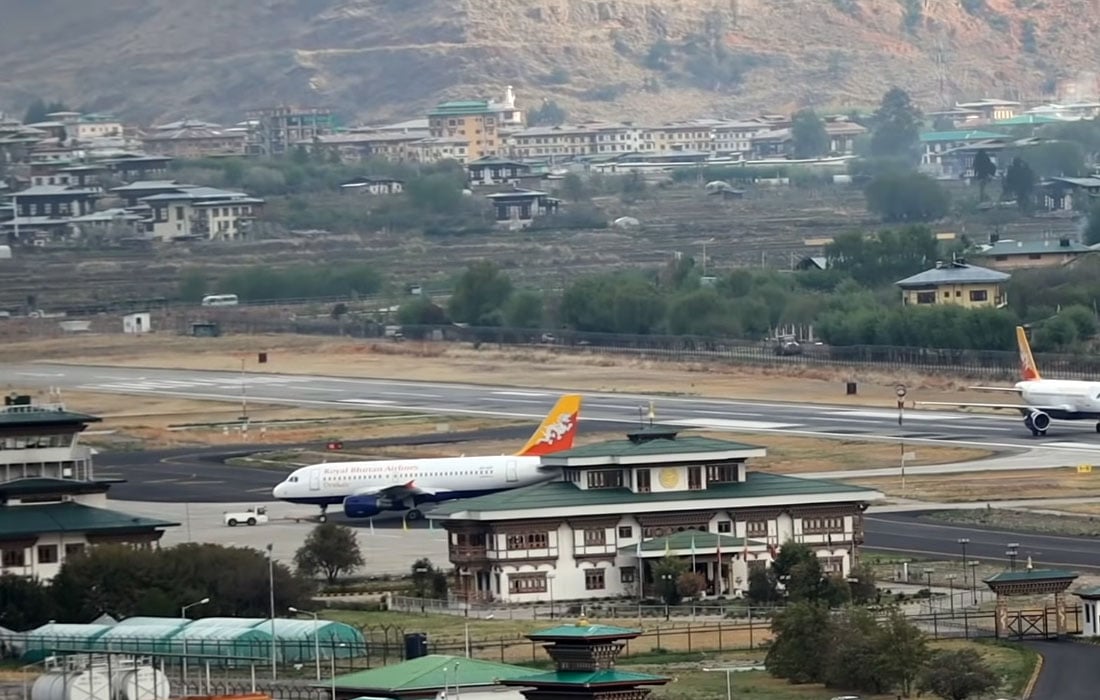 Tourists from all over the world lures to Bhutan's mesmerizing country settled into the laps of the Himalayas. Bhutan is the only country that measures the happiness potions of its people and has a carbon negative environment. The Buddhist country is renowned for its monasteries, temples, rich culture and beautiful natural landscape. Despite the fact that it is one of the magical countries and a popular tourist destination, Bhutan only has few airports to fly in the tourist to the country. Bhutan is a famous tourist destination with only four large airports that offer its services for visitors from all over the world. If you want to know more about the airports in Bhutan, keep reading the blog.

We are sure that these details will help you reach your dream destination- Bhutan at ease. If you want to know more about the visa and packages available to Bhutan, you can check our blog. If you have any queries or confusion about your next travel to Bhutan, we are happy to help you. You can contact us via the number given at the website or leave a comment so that we can get back to you.

Paro International Airport is located in the valley town of Paro in Bhutan. It is the first and only international airport established in the year 1968. The Indian Border Roads Organization established the runway in the valley in 1969. Later in 1981, Druk Air which is Bhutan’s first aircraft was built by the Royal Charter. Paro Airport is an enthralling place to be at with an elevation of 2235m above the sea level and bounded by the tall mountains as high as the 5500m. Paro Airport is small in size with only one terminal and a runway.

In 1990, the airport's runway was increased to 1964m from 1402m, where heavier aircraft could fly over. By 2012, Paro International Airport accounted for 181,659 tourists who used the terminal. Flying over the clouds into the Paro International Airport, you can see 18000ft mountain peaks on either side of you. Few certified pilots fly into the Himalayan valley. The runway is as thrilling as it gets as it is situated between the mountain foliage. In fact, there are only eight pilots who are certified to land at the Paro Airport yet over 30,000 people are coming to this beautiful country each year.

You can use the service of the airport if you are visiting to places like Chhukha, Daga, Chirang, Ha and Tsirang. Landing at the Paro International Airport will be an incredible and enjoyable memory in your life and is certainly a beautiful place to be at.

Gelephu Airport is one of the domestic airports in Bhutan located at Samtenling, Gewong. It is situated near the small town of Gelephu in the Sarpang district of Bhutan. The airport was established in 2008 and was planned to be an international terminal. But due to the financial and physical problem, it kept running on intervals. Finally, it started working in 2017. The Royal Bhutanese Government decided to rerun the airport services in November 2017 after the concise period of flights in 2015. Gelephu Airport has only one airplane in operation which is Druk Air. It flies to and from Jakar and Paro.

Grand Cultural Tour of Bhutan takes you in a tranquil cultural odyssey of Bhutan and its begins with a scenic flight to the historic town of Paro. This 6 days Bhutan tour package is ideal for exploring Bhutan.

Bathpalathang is situated near the Jakar district of Bhutan which started operating from the year 2011. It only had the flight from and to Paro but later the operation was suspended in 2012. There were few laidback which includes material shortage, waterway diversion and so on. Due to these reasons, the government and contractual workers could not finish the project on time and was scheduled later. The Bathpalathang airport is the most up to date airplane in Bhutan. The airport reopened and has two flights- Druk Air which flies to ad from Paro and Gelephu; Bhutan Airlines flies from and to Thimphu and Paro. The airport is only 5-6km away from Jakar and you can use this airport if you were traveling to Bumthang Bhutan and Chamkhar Valley. 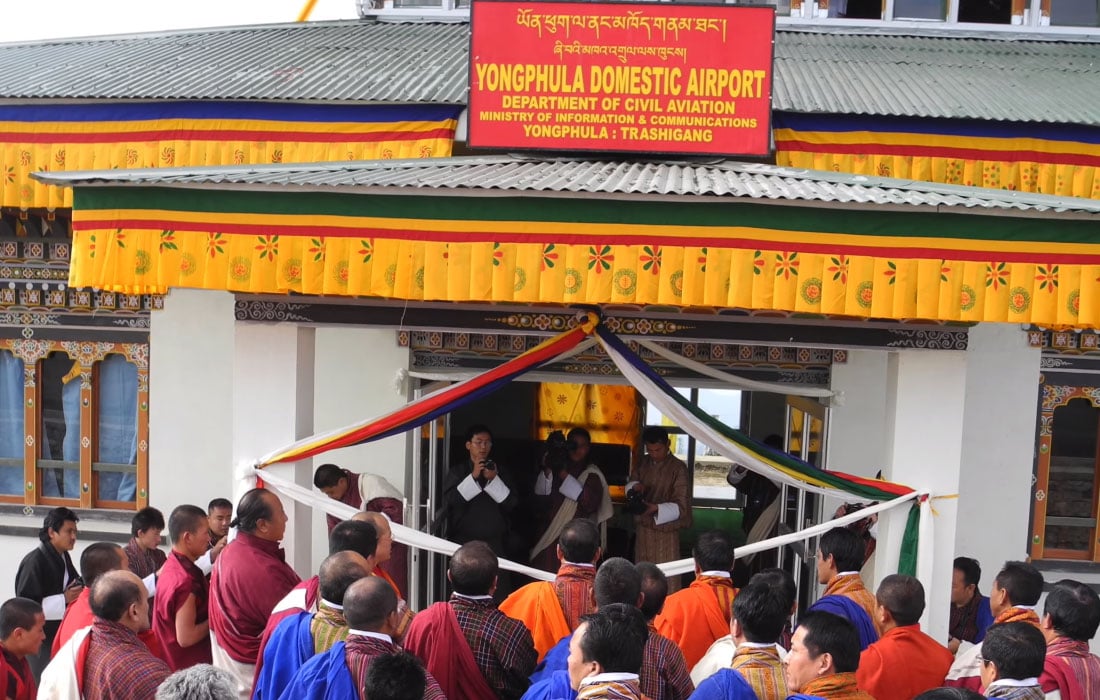 Located near Trashigang in Bhutan, Yongphulla Airport was initially established in the 1960s by the Indian Army. It only had one airstrip which was not used at its optimal level. Yongphulla Airport was an airstrip back then on a bumpy and uneven territory. During the mid- 2000s, the airplane was refurbished into a viable airport. However, later in late 2013, the air terminal was reported to be shut until 2015. It went on for over four years. The airplane was re-established in 2017 by the Prime Minister Dasho Tshering Tobgay after the runway met the international standards. Druk Air and Bhutanese Airline are mainly operating in this airport which travels from and to Jakar and Paro. It is 20-25 km away from Trashigang and is feasible to take the airport if you are traveling to Thimphu, Paro or Jakar.

If you plan a trip to Bhutan and love to know more about the packages available, check our website where we have sorted out all kinds of packages that will give you the best of Bhutan in just a few days. If you still have any queries or confusion on Bhutan or its airports, you can simply contact us. Leave a comment or a feedback and we will get back to you soon.

Perfect opportunity to taste the charm of the glorious nation and culture of Bhutan. 4 Days the Glimpse of Bhutan Tour is absolutely the right one for those who are short of time but do not want to miss the stunning realm of the Last Himalayan Kingdom, Bhutan

The Western and Central Bhutan tour is well designed to offer you the perfect chance to explore the famous cultural hotspots, historical heritages, major tourist hubs of the Himalayan Kingdom of Bhutan.

During Bhutan Tour with Haa Valley, you will be visiting the popular places in Bhutan with stunning Haa Valley. Get an insight into the local culture and experience warm hospitality and enjoy the architectural marvel of Bhutan.

Bhutan is a small country settled in between India and the Tibetan region of China. Bhutan is known as “Land of Thunder Dragon,” which is a stunning destination to be at. The country is filled with brilliant views of the mountains, landscape and rich culture.

2. Why should I visit Bhutan?

Bhutan is one of the best destinations to visit. The country is filled with ancient culture, mesmerizing landscape, amazing festivals and warm hospitality of the local people. You can experience the cultural and natural beauty in this magical land. Known as the Last Shangri-La, this Buddhist country is truly a country that you must visit in your lifetime.

Yes, you will need a visa to enter Bhutan, except if you are a citizen of India, Maldives, and Bangladesh. If you are a foreigner, you will need to process via a local tour operator. The passport should be valid and you must pay the visa fee of USD 40 per person.

4. What documents do I need to have?

You will need mainly two documents such as a visa confirmation letter that the tour operator arranges before the trip and the itinerary of the tour you are taking on. The visa will then be stamped in your passport after arriving at Paro International Airport.

There are mainly two ways to enter Bhutan. You can either use the airways services or use the roadways. If you fly by air, you can fly on Druk Air or Bhutan Airlines from Kathmandu, Dhaka, Bangkok, Singapore, and other Indian cities like Bagdogra, Gaya, Delhi, Kolkata, Mumbai, and Guwahati.

If you are traveling via the roadways, you can either enter Bhutan via the West Bengal border to enter Phuntsholing from the southwest or Samdrup Jongkhar from the southeast.

6. What is the weight limit for luggage on Druk Air and Bhutan Airlines?

You can carry 20kg in economy class and 30kg in business class in Druk Air. You will be given 5kg extra for storing in the overhead baggage bin.

In Bhutan Airlines' case, you can carry 30kg in economy class and 40kg in business class.

7. Why So Few Pilots Are Allowed At Bhutan’s Paro Airport?

Bhutan’s Paro International Airport is listed as the 'world’s most dangerous airports.' But there is nothing to get scared of! Less than 12 pilots are qualified to land in this airport. The runway is between 18,000 ft peaks with a long, winding terrain and is 7,431 ft long, and can be seen only moments before landing. Very few pilots are certified to land at Bhutan’s Paro International Airport and the best ones are chosen from thousands of the pilots. Flights are allowed during daylight only with good visual landmarks.

TS
Tau Suttikul | Wed Jan 12, 2022
How come I don't know about Bathpalathang Airport? Thanks for the info
Reply
DP
Derrick Perez | Sat May 15, 2021
My experience while landing on Paro International Airport was literally adventurous. Some may find it scary but it was a thrill to me. Salute to those pilots who are flying on regular basis to Paro.
Reply