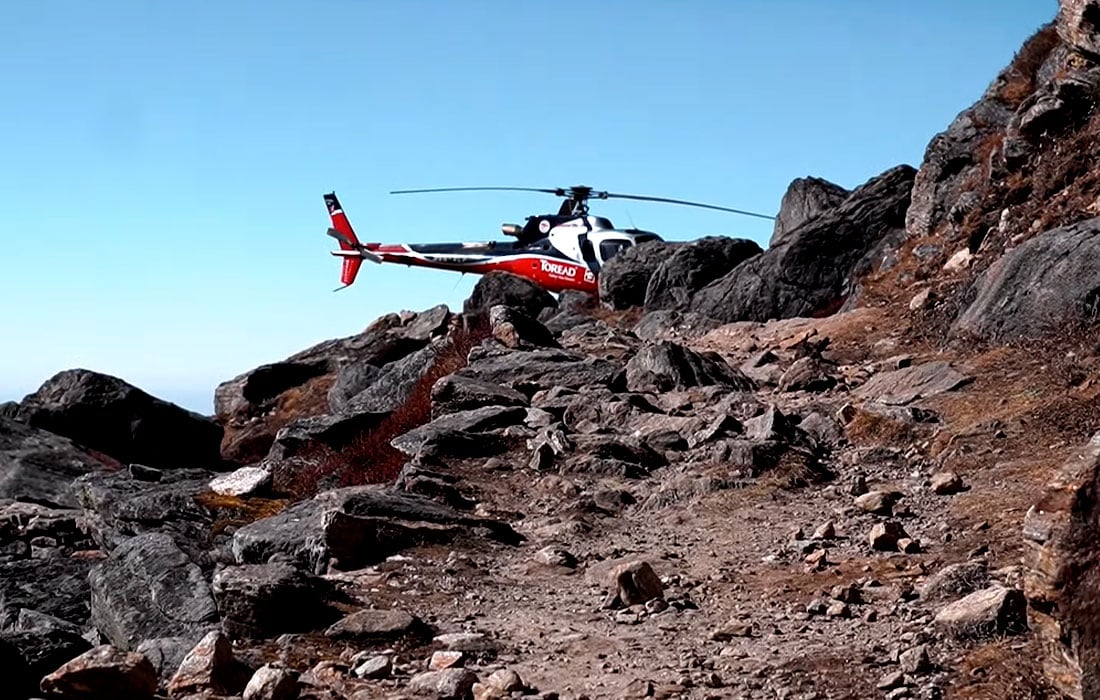 The Gosaikunda Helicopter Tour in Nepal is a thrilling flight leading to a pristine Gosaikunda lake surrounded by massive snow-capped mountains. It is one of Nepal's shortest yet most beautiful religious helicopter tours. The overall tour will take around one and a half hours with 40 minutes of flight duration. If you are short on time and want to visit sacred Gosaikunda Lake, then this Heli tour is the best choice.

Gosaikunda Lake is the most famous pilgrimage site for Hindu and Buddhist devotees. Pilgrimages from many places of the country and even from India come to take a holy dip in the lake once a year. This pristine lake stands at an elevation of 4,380m inside Langtang National Park in Rasuwa district. Because of its altitude, almost half of the year, the lake remains frozen. The view of the frozen lake from above is truly breathtaking!

This trip is one of the best day helicopter rides from Tribhuvan International Airport's domestic terminal in Kathmandu. After a short brief regarding mandatory safety precautions, the adventurous flight begins. As you fly to the lake, you'll catch the fantastic sights of the Kathmandu Valley. Then, slowly you'll enter Langtang National Park. If you are lucky, you can even spot some rare wildlife species of Langtang National Park, such as Red Panda, Musk Deer, Himalayan Tahr, Snow Leopard, etc., during a helicopter tour. Also, from the sky, you'll witness the alluring views of colorful rhododendrons blooming amidst the oak and fir forests, especially during the spring season.

No wonder, during this one-hour tour over the Langtang region, you'll see the area from a different perspective. Around the Gosaikunda Lake, there are 108 Kundas (Lakes), but you can witness mainly Saraswati Kunda, Bhairab Kunda, Surya Kunda, Nag Kunda, and Gosaikunda from high up in the air. You can also see the trekkers admiring the serene beauty of the lake when flying over the lake. The wonderful helicopter tour offers magnificent views of the Langtang and Manaslu Himalayan range, Ganesh Himal, Shisapangma, etc.

Upon landing at Gosaikunda Lake, the stunning view of the lake with the surrounding massive mountain range will greet you. Through this helicopter ride, you'll not only get an incredibly unique view of Gosaikunda Lake or the area, but this is a thrilling and entertaining experience. In addition, this heli tour is the only way to enjoy the aerial view of more remote areas of the Langtang region. During the trip, a pilot will also share the rich history of the area and point out fantastic photo opportunities.

In general, the Gosaikunda heli ride is doable all year round. However, the best time for the Gosaikunda Heli Tour is the spring and autumn seasons. The weather conditions are pretty stable with the warm and sunny day, making it easy to tour the lake. The mountain views and surrounding landscapes are at their best. Likewise, we don't recommend taking a heli ride during foggy and rainy weather as it’ll obstruct the views, making helicopter flight worthless. The Gosaikunda area is cold during the winter, the lake is also frozen, and the surroundings are covered in snow. However, the view of the frozen lake and surroundings covered in snow looks lovely. So, with good preparation and warm clothes, you can even have an amazing helicopter tour to Gosaikunda. This adventurous helicopter flight is perfect for every age group. It is specially designed for time or physical constraints and cannot make the arduous trek up the 4,380m/14,370ft; this short helicopter journey is worth taking.

Breathtaking views of Himalayas and Gosaikunda
My friend and I took this trip a few months back. We really enjoyed our time there in Nepal. The views of the mountains, landscape, and the Langtang r...

Samuel Murray   | March 29, 2022
beautiful view of Gosaikunda
We absolutely loved our a-day heli tour to Gosaikunda Lakes. The tour was well managed and the day was perfect with a clear sky. The heli tour was jus...

Not Satisfied with this itinerary?

Phase I: Transfer to Tribhuvan International Airport- Fly from Kathmandu to Gosaikunda Lake

One of the representatives from Third Rock Adventures will help you transfer to the domestic terminal of Tribhuvan International Airport. Before boarding, our caption will brief you about some essential guidelines and things you need to consider during the helicopter flight. You have to follow specific protocols. The captain will introduce you to the flight crew and other group members. During the flight, you have to follow the captain's instructions strictly. Then the flight will take you to the north towards the Langtang region, one of Nepal's popular trekking regions.

The helicopter will take off from the domestic terminal of TIA with an eye-catching aerial view of the Kathmandu Valley. Slowly the helicopter moves forwards; you will get the view of green hills from the sky with impressive snow-capped mountains in front of your eyes. Then, you'll get the picturesque sight of the vast expanse of Gosaikunda Lake from above the ground. This heli tour is a real treat. Bringing you from the aerial scenes of dense forests, popular Langtang trail, Langtang National Park, wildlife to grand majestic mountain views, this heli tour is something you cannot miss. You'll also get a glimpse of a series of lakes from the sky, including Gosaikunda, Saraswati Kunda, Bhairab Kunda, Surya Kunda, and Naga Kunda. Enjoying the breathtaking scenery, you'll land at the bank of Gosaikunda Lake.

Flying above several Tamang settlements and giants of verdant green dense hills, you will reach the Gosaikunda Lake after approximately 18-20 minutes. Once you land at Gosaikunda Lake, you can worship and take a holy bath at the lake.

Besides, due to its altitude, the weather at Gosaikunda Lake is totally unpredictable. One moment it's a bright and sunny day, the next, you are covered in snow. So, you'll spend half an hour as spending more time might result in consequences which ruin this whole thrilling heli journey. However, it is more than enough to admire the pure and peaceful environment and even take some beautiful pictures with astonishing backdrops. After enjoying the moments, you'll return to the helicopter and prepare to get back to Kathmandu.

Phase III: Fly Back from Gosaikunda Lake to Kathmandu Valley

Having a glorious moment at Gosaikunda Lake, you'll get back to Kathmandu, where you'll get one last chance to enjoy the aerial view of lakes, mountain ranges, and unique landscapes. After half an hour, you'll land at Kathmandu International airport. Officially your short Gosaikunda Heli trip ends, and it's time to bid goodbyes. However, if you still want to extend your vacation, you can opt for other heli packages such as Annapurna Base Camp Helicopter Tour, Everest Base Camp Helicopter Tour, or Upper Mustang Helicopter Tour.

Customize Your Trip
OR

Helicopter Tour to Everest Base Camp - All You Need to Know

United States of America
Mar 29, 2022
Breathtaking views of Himalayas and Gosaikunda
My friend and I took this trip a few months back. We really enjoyed our time there in Nepal. The views of the mountains, landscape, and the Langtang region with the lake were breathtaking, and the images from the trip still burn at the back of my head. We are wholeheartedly thankful to the team for making it happen.
Matilda John

United Kingdom
Mar 28, 2022
beautiful view of Gosaikunda
We absolutely loved our a-day heli tour to Gosaikunda Lakes. The tour was well managed and the day was perfect with a clear sky. The heli tour was just like we expected. The only drawback was we couldn't spend much time in the lake, but it was due to our safety purpose.
Book With Local - Total Flexibility