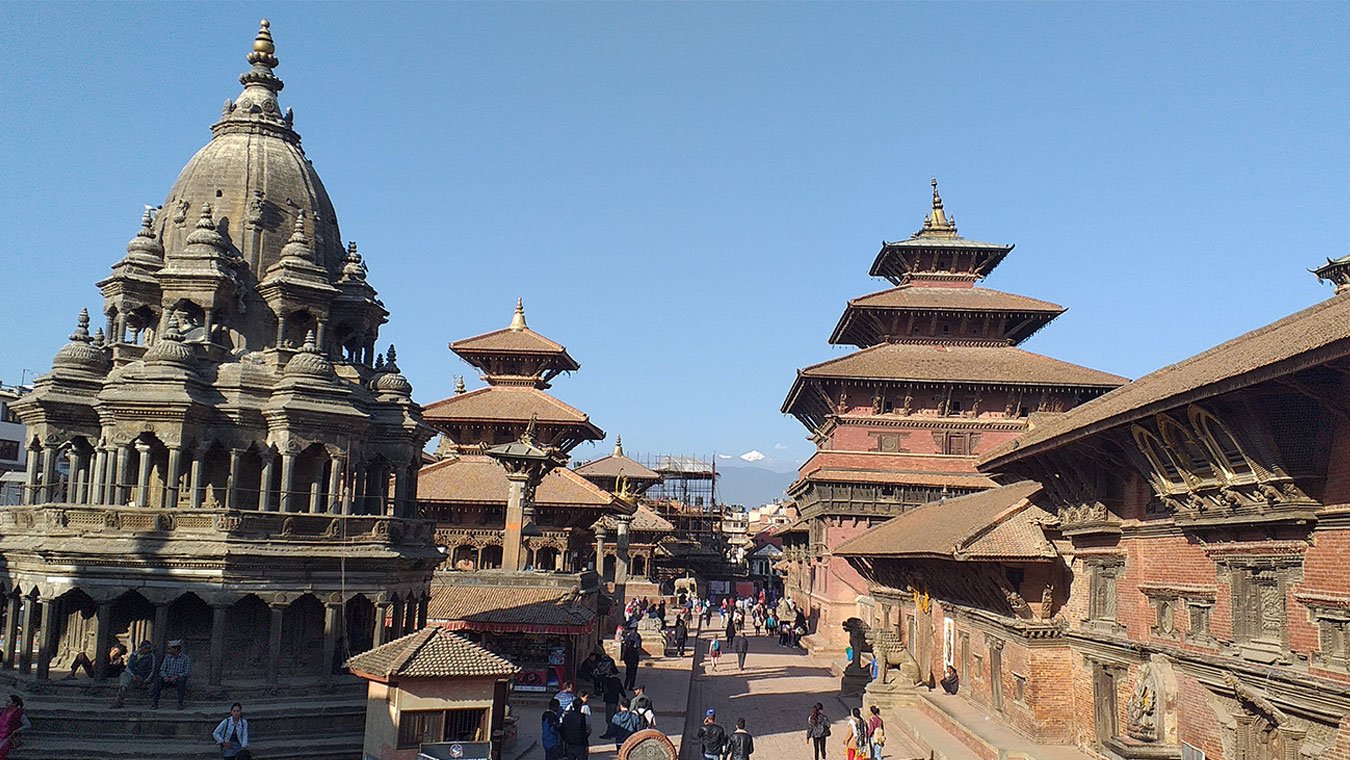 Walkthrough the palace square and discover a treasure trove of art in stone, wood, and metal during your Patan Durbar Square Tour. The Patan Palace Museum, Golden Temple, Krishna Temple, etc., are some of the ancient gems of this medieval city. Moreover, visits to some of the oldest Buddhist shrines in the valley on the periphery of Patan Durbar square will enrich your experience. Patan Durbar Square Tour also lets you discover more of the valley’s rich art and culture in the medieval villages of Khokana and Bungamati. Take a traditional village tour and stroll around these ancient Newari villages. Surrounded by green paddy fields, Khokana Village is famous for the production of mustard oil using traditional oil pressers. Nearby is another medieval village, Bungamati.

Bungamati is home to the city’s rain god, Rato Macchhindranath. This is where the idol of the rain god comes to rest after the Machhindranath Jatra (chariot festival) held in Patan every year. This picturesque village lies next to the Bagmati River and is filled with Newari traditional homes. Wood and stone carving workshops line the village streets. The artists at work are descendants of the unnamed artists whose works are showcased at the city’s heritage sites. Take pictures and interact with the villagers before you are finally driven back to your hotel.

If you are interested in visiting just the royal squares of the three medieval cities in the valley, you can choose our Kathmandu Ancient City Tour. If you have a long stay in Nepal awe, recommend you try out some of our popular trips -  Kathmandu Pokhara Chitwan Tour - 9 days, Nepal Multi Adventure Holiday - 11 days, Ghorepani Poon Hill Trek - 7 days, Everest Base Camp Trek - 14 days, Annapurna Base camp Trek - 11 days or Everest Base Camp Helicopter Tour - 1 day.

Best Day
I listened to my best friends about this day tour of exploring Patan Durbar Square, Khokana & Bungamati. Honestly, I never heard of this place and...

Jeremiah Lane   | December 10, 2021
Patan Durbar Square Tour
Me and my best friend DiD recent trip to the amazing city of Patan. It was the most wonderful trip- a day tour amidst the medieval temples and famous ...

Mike Bosch   | December 24, 2019
One Day Tour To Patan
Newari people and their daily lifestyle allured me. I was in Patan a week ago with Third Rock. This one day tour to Patan is amazing. I explored th...

Christopher Pugliese   | December 24, 2019
An insight into the rich Nepalese history and culture
Having returned from our Everest trek a day earlier we (my friends and I) decided to explore a bit of the city. Since we were interested in learnin...

Located in the heart of old Patan city, the Patan Durbar Square is a quadrangle filled with several temples, palaces, and courtyards. Most of the structures date back to the Malla era. Patan Palace, which now houses a museum, used to be the royal residence of the Malla kings ruling over Patan. Surrounding the royal palace are the octagonal Chyasin Dewal, Krishna Mandir, Bhimsen Temple, Hiranyavarna Mahavihar (Golden Temple), etc. Inside the Patan Palace is courtyards (Keshav Narayan Chowk, Sundari Chowk, and Mul Chowk) with gilded doorways and decorative stone baths and wells.

Lying just a few minute's drives from central Kathmandu, Khokana is one of the most ancient Newari villages. This sleepy village was once a thriving economic hub. Surrounded by acres of paddy fields, Khokana is filled with traditional Newari houses and Hindu and Buddhist shrines. The shrine of goddess Rudrayani (the patron goddess of Khokana) lies at the center of the village. Dey Pukhu Jatra and Shekali Mai Jatra are two important Khokana festivals. The village is known for the production of mustard oil using traditional methods. Stroll around and visit an ancient oil mill that is still in use. You may want to purchase a bottle or two of this pure oil to take back home.

Bungamati is known as the home of the valley’s Rain God, Machhindranath.  The temple dedicated to the deity lies at the center of the village. Built-in a shikara style, traditional homes of the villagers surround the large temple. The village streets are lined with wood and stone carving workshops. Bungamati Culture Museum, De Punkha (sacred pond), Karya Binayak Temple, and Bhairab temple are other places of interest.

United Kingdom
Dec 10, 2021
Best Day
I listened to my best friends about this day tour of exploring Patan Durbar Square, Khokana & Bungamati. Honestly, I never heard of this place and was anxious about the day. But the moment we visited the palace in Patan, it was truly amazing. There was so much to learn, the intricate design cemented on the walls and roofs with wood-crafting was a new and beautiful thing to me. We also visited the Newari town that had different impressions. It was wonderful experience.
Mike Bosch

Germany
Dec 24, 2019
Patan Durbar Square Tour
Me and my best friend DiD recent trip to the amazing city of Patan. It was the most wonderful trip- a day tour amidst the medieval temples and famous UNESCO world heritage sites. We had never seen pictures of Patan and Newari people. The charm of Patan and enticing culture of local people there, old temples and architecture and busy market nearby , everything is amazing. I realized one day in Patan or Kathmandu is not enough. I wish I could go there again. Aniway Thanks Third Rock for this beautiful trips. I appreciate your unique trip and outstanding service.
Best Destination,
Yes
Christopher Pugliese

United States of America
Dec 24, 2019
One Day Tour To Patan
Newari people and their daily lifestyle allured me. I was in Patan a week ago with Third Rock. This one day tour to Patan is amazing. I explored the beautiful city of Patan in just a day. Thanks to Third rock, for creating this day tour, I was exactly looking for this trip. I had few days before I could resume my work and had to explore Patan. I wanted to shoot some fantastic shot of Patan city and the amazing people living there. Patan Durbar Sqaure was calling me ever since I happened to see some pictures on Instagram and finally did it. I am coming to Nepal in few months with my best friends again, and this time, it will be a week vacation in Kathmandu and the Himalayas of Nepal. See You Soon Nepal!
Best Destination,
Yes
Katherine S