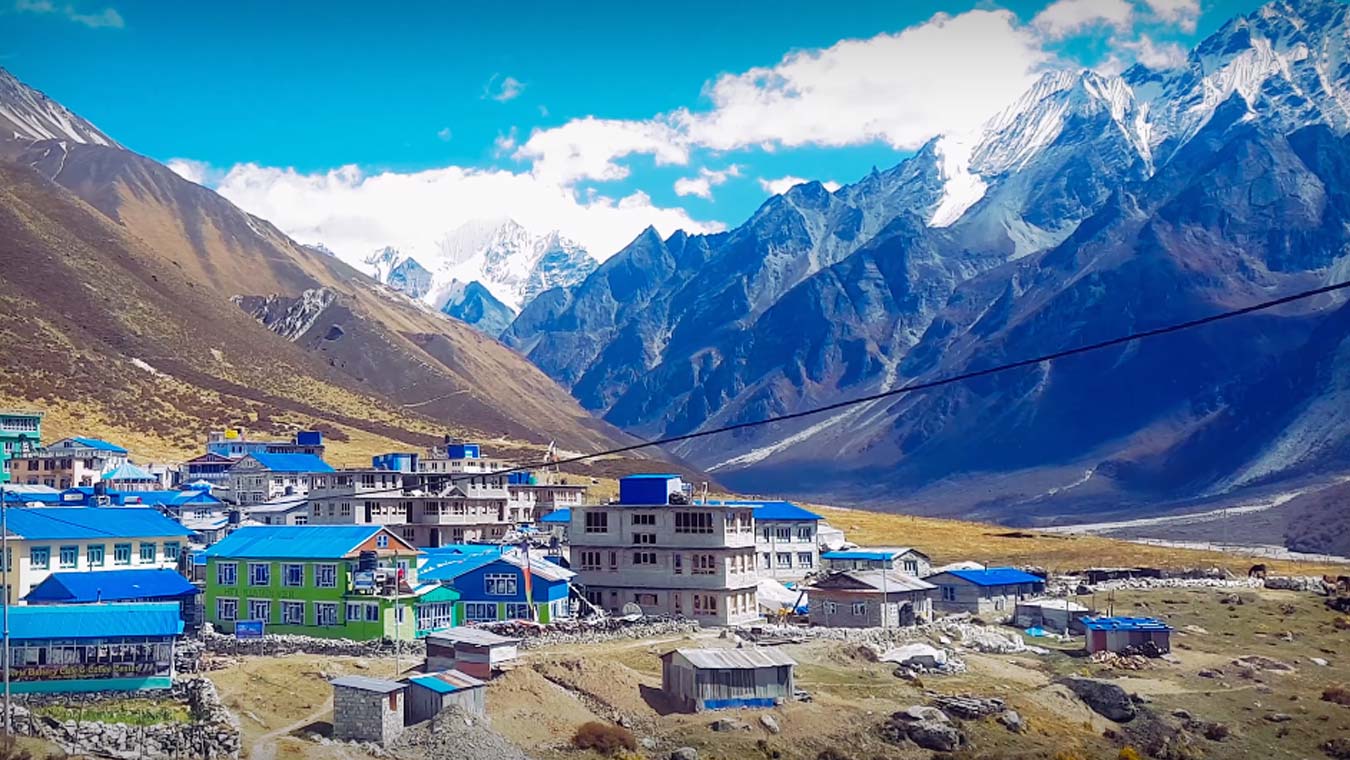 Langtang Helicopter Tour takes you on an exhilarating helicopter ride across the beautiful Langtang Valley. A new inclusion in our Nepal Helicopter Tours, the helicopter tour to Langtang lets you experience the splendor of the Langtang Range. Langtang Region is the only trekking region that lies close to Kathmandu. This area is renowned for its rich Tamang Buddhist culture and Himalayan peaks that are easy to climb. The Tamangs, an ethnic mountain community, are believed to be descendants of Tibetan horsemen who came to trade horses in Nepal hundreds of years ago. In the traditional villages one can still find families practicing Tibetan culture and breeding horses. The region also came into the limelight when an avalanche triggered by the devastating 2015 earthquake destroyed the entire Langtang Village. The International Astronomical Association has named a crater in Mars ‘Langtang’ in honor of this village.

Get spellbound and mesmerized! Your Langtang Helicopter Tour begins from Tribhuvan International Airport. Enjoy aerial views of Kathmandu Valley as the aircraft makes its way to Langtang. Watch the green hills, hilltop villages, and serpentine rivers flowing past the mountains. Capture the breathtaking sight of snowcapped Himalayan peaks and Gosainkunda Lake (a sacred mountain lake) in your camera. The helicopter lands briefly at Kyangjin Gompa, a Tamang settlement with an ancient Buddhist Monastery located inside the Langtang National Park. Soak in the sights of the snow-covered mountains and glaciers during your Langtang Helicopter Tour. After exploring the area and refreshments at a local café you will fly back to Kathmandu. Some of the Himalayan peaks you will get to fly close to during your Langtang Helicopter Tour are Langtang Lirung, Langshisa Ri, Ganesh Himal, Dorje Lakpa, Paldor Peak, Jugal Himal, Yala Peak, and Singri Himal.

Awesome Heli Tour
My husband was on his vacation with his friends while my children were at their aunt's house. I had to do a short, in fact, a day trek and Lang...

Denise Bonner   | December 19, 2019
Heli to Langtang
I wanted to board a heli to Langtang Himalayas and explore the Tamang village of Kyangin Gompa. I had once heard about Langtang Valley and it's beauty...

Victor Milburn   | December 19, 2019
Langtang Heli Tour
It was actually a great mountain-viewing heli tour. We flown to the north of Kathmandu, to Langtang valley. I could see views of the mountains includi...

Luca Cooper   | November 10, 2019
Flying to the Himalayas- Langtang Helicopter Tour
Wow, this was a wonderful tour! This was the second time we were visiting Langtang and we did it in style. Langtang has been special for us (my hus...

Is this trip suitable for you?

Stopover at Kyangjin Gompa (3,830m) – Fly back to Kathmandu

Drive to the airport and check in. Your Langtang Heli Tour commences after you board the helicopter and fly north, towards Langtang Valley. As the aircraft hovers above Kathmandu Valley, savour the aerial view of the city. From up above you will find the teeming city nestled within a ring of green hills. As the helicopter approaches Langtang Valley you can see the Nepalese and Tibetan peaks stretching across the horizon. Langtang Lirung, Ganesh Himal, Dorje Lakpa, Paldor Peak, Jugal Himal, Singri Himal and Shisapangma are some of the Himalayan peaks you will get to view.

Stopover at Kyangjin Gompa (3830m) – Fly back to Kathmandu

Langtang Helicopter Landing- The helicopter lands briefly at Kyangjin Gompa, an ancient Tamang settlement named after its Buddhist Monastery. This settlement is located inside the Langtang National Park, an ecologically rich area. Snow clad Himalayan peaks and glaciers surround this village. There is also a cheese factory established by Swiss geologist Toni Hagen more than seven decades ago. This is the oldest and the first Yak Cheese Factory in Nepal. Take pictures and explore the village. As staying in high altitude will lead to complications, the chopper will land for only 20 minutes.

After refreshments at a local café, climb aboard the helicopter and return to Kathmandu. Enjoy stunning sights of Langtang Valley, Gosainkunda Lake (a sacred mountain lake) and the villages along the Tamang heritage Trail - Gatlang, Thuman, Briddim, Syabru Besi etc. 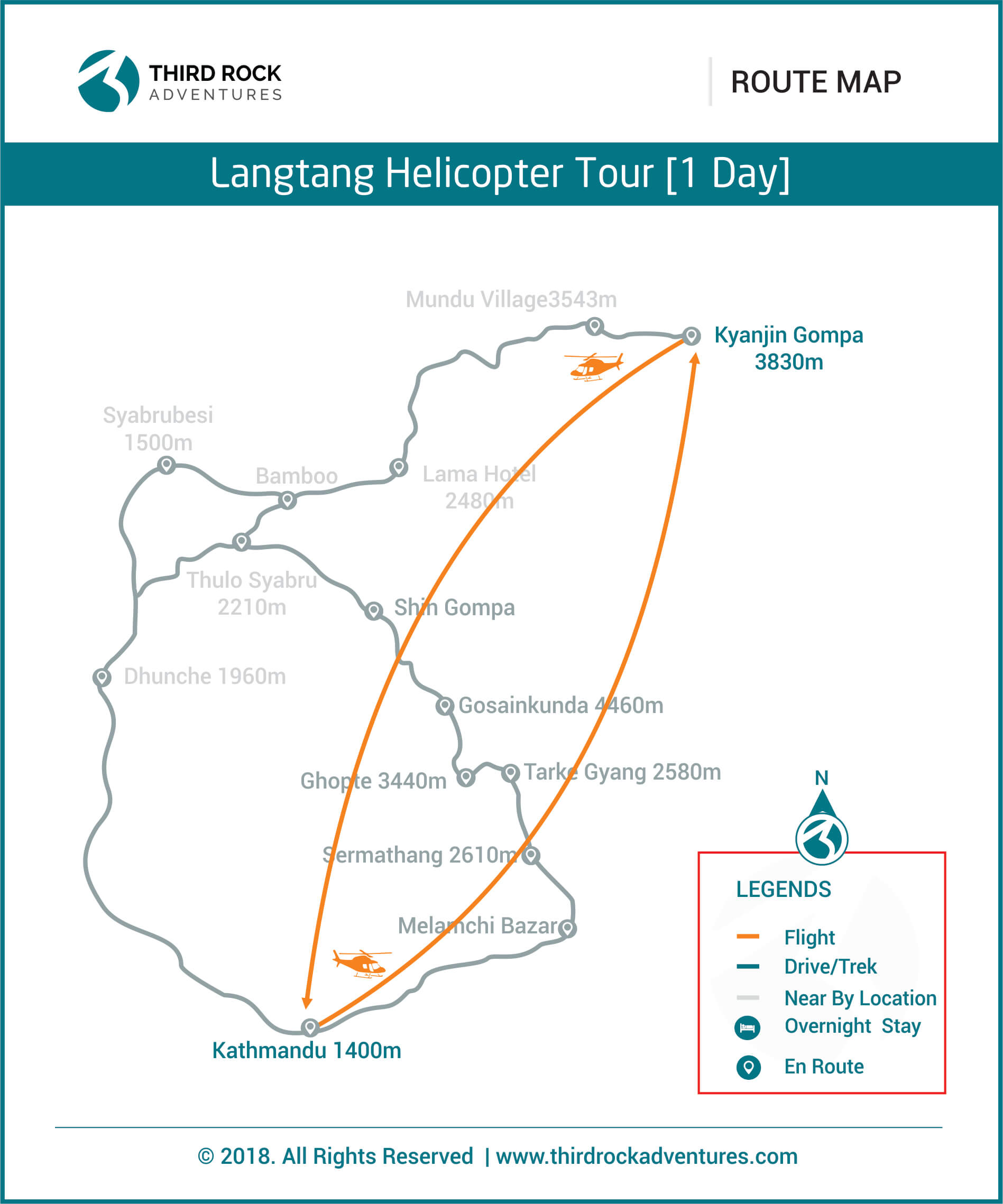 Helicopter Tour to Everest Base Camp - All You Need to Know

Australia
Dec 19, 2019
Awesome Heli Tour
My husband was on his vacation with his friends while my children were at their aunt's house. I had to do a short, in fact, a day trek and Langtang Heli Tour was on my bucket list. I did every planning in rush but it was worthy. It all went good, I completed by long-wished heli tour to Langtang Valley. Had to say this, if it was not Third Rock Adventures, I would not have done it, they were quick and assertive with every step. My heli ride date and departure were guaranteed and they were up with their words. I am back from my awesome heli tour. An incredible heli ride up above the Himalayas and Gosaikunda Lakes. My husband was shocked to see such cool pictures of the Himalayas and Tamang people I met there. He could only imagine how awesome my trip was. And now I am bragging about my creative and cool heli tour. Thanks to Third Rock Adventures for their service I could not anticipate from any other travel agency.
I wanted to do a day trip and check off the Langtang Heli tour from my bucket list.
Of course, flying parallel to the Himalayas. And Gosaikunda Lakes from Heli was impressive
just like me, if you are short on time and have a day in your hand, this trip is the one. Without any doubt, call the agency and pack your bag to Nepal and Himalayas
Victor Milburn

United Kingdom
Dec 19, 2019
Heli to Langtang
I wanted to board a heli to Langtang Himalayas and explore the Tamang village of Kyangin Gompa. I had once heard about Langtang Valley and it's beauty. My friend had done it and requested me to do it any time soon and I did it. I had a summer break and wanted to visit Langtang valley but due to my due works, I could only afford a day. Talked with travel consultant at Third Rock Adventures and everything perfectly matched up and here I am. One of the best things about this trip is insane views of Gosaikunda Lakes from heli. Overall, this trip made summer break a perfect holiday.
Best Destination,
Recommended this trip
Catch some awesome shots of the Himalayas in Langtang region of Nepal
flying parallel to the Himalayas and view of Gosaikunda Lakes
if you're short on time but want to catch the mountains, this trip is for you.
Luca Cooper

United States of America
Nov 10, 2019
Langtang Heli Tour
It was actually a great mountain-viewing heli tour. We flown to the north of Kathmandu, to Langtang valley. I could see views of the mountains including Langtang Lirung, Ganesh mountain. ( There are more, I cannot remember the name). THe guide let me stroll around the Kyanjin Gompa for few minutes while the heli-engine was warm. If I have to state the highlight of this heli tour, it is definitely the mountains.
Yes
Johanna Mortensen

Denmark
Mar 17, 2019
Flying to the Himalayas- Langtang Helicopter Tour
Wow, this was a wonderful tour! This was the second time we were visiting Langtang and we did it in style. Langtang has been special for us (my husband and I) as this was where we trekked to on our first visit to Nepal 17 years back. We have such good memories from that trek. The news about the destruction caused by the 2015 earthquake to Langtang Village saddened us greatly. We had stayed at a teahouse run by a jovial local lady at this village. This year we decided to revisit the region again. Our plan was to trek but we had to change our plans at the last minute because of a knee injury. We were about to shelve our plans when the Third Rock team(with whom we had booked the Langtang Trek) suggested that we do the Langtang Helicopter Tour instead. Thanks to them we were able to revisit this lovely region and relive our memories. The flight was absolutely breathtaking. The Himalayas looked stunning and the stopover at Kyangin Gompa brought back so many memories. Once again thanks to the team at Third Rock Adventures for this wonderful adventure. We recommend this adventure to anyone who wants to get close to the Himalayas without exerting oneself. It is easy and not very expensive for a helicopter tour.
Best Destination
Yes
We wanted to visit Langtang Region.
From the take off to landing, the whole tour was enjoyable.
Take this tour. Great value and beautiful views.
Explore Trip By Duration : 1 day, 2 days, 3 days, 4 days, 5 days, 6 days, 7 days, 8 days, 9 days, 10 days, 11 days, 12 days, 13 days, 14 days, 15 days, 16 days, 17 days, 18 days, 19 days, 20 days, 21-days and above, View All Trips