5 Tips For Kathmandu To Lukla Flight 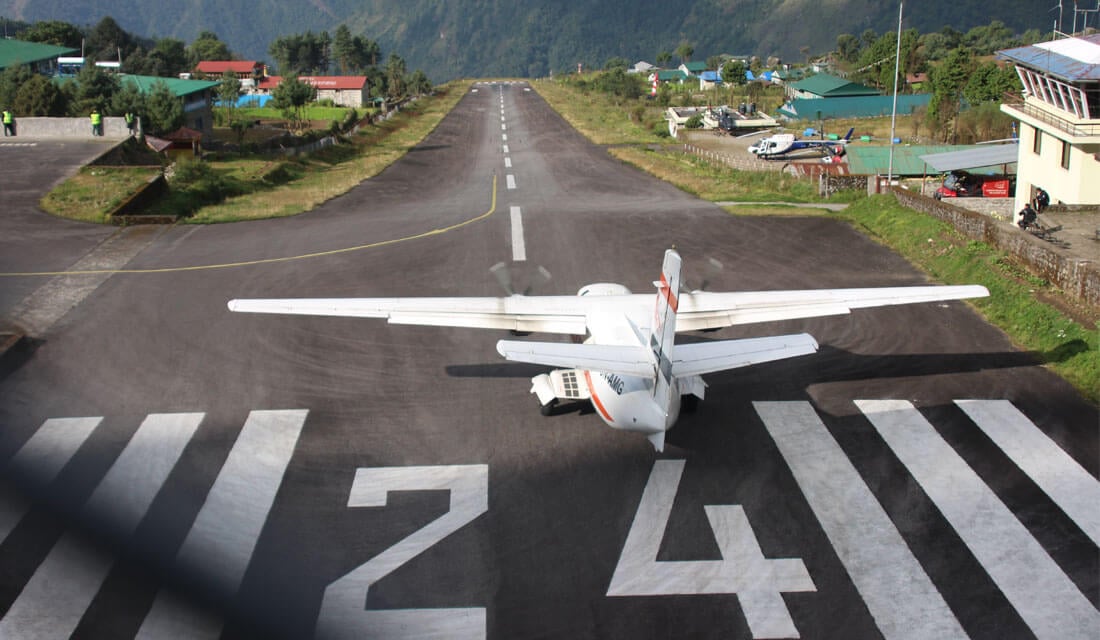 When you decide to visit Nepal, you can expect the unexpected. Picture yourself sitting inside a small twin otter propeller along with twenty others, a bumpy 40 minute flight to one of the most challenging airports in the world.

Imagine sitting in a small circular tube where you can see the entire cockpit crew fighting against gravity. Have you ever wondered how ‘James Bond’ feels breaking through the clouds and reappearing on the other side? Fly to Lukla, and feel the adrenalin rush as you see the Lukla airport runway, which is literally built on a steep incline of a hillside.

The Lukla airport was a dream of Sir Edmund Hillary for connecting the country of himalayas with the rest of the world. It is also the shortest route from Kathmandu for Everest enthusiasts instead of a 6 to 7 days trekking and some bus ride.

Keeping in mind that not everyone has the time for the longer endeavour due to the tight schedule, here are a few know-before-you-do-it for those choosing to fly from Kathmandu to Lukla. But do bear in mind that it will be a bit cramped on-board. An odd chicken may jump out of a bag, and not to mention some other livestock like a beady-eyed goat watching you. You may also be sitting above a seat that’s got several bags of rice or crates of beer under it, et al.

1. Try And Book For A Left Side Seat

Always go for a left seat by the window. If you don’t, you will end up watching the plain south all the way which is not what you came to see, the mountains!

2. Enjoy The Company Of The Flight Deck

A lovely lady in a traditional Sherpa dress will hand out cotton wool for your ears and possibly a sweet for you, take them both. Unlike other aircrafts blocking the view of the cockpit, the entire flight crew is visible from your seat. Feel the plane taking off as the pilot pulls the lever, prepare for the bend before it happens. Watch through the cockpit, be a virtual pilot and steer the aircraft in your mind and conclude if you have what it takes to be a veteran pilot. Follow the security advice from the air steward. Suck on the boilers kindly provided to help your ears from popping off.

3. The Mountains Are Just Outside The Window If Only You Could Touch Them

As soon as the mini-propeller uplifts its nose, the mighty natural skyscrapers come into view. Snow-capped and distinctly visible, take help from a mountain enthusiast to identify them all. Over 18 of them will smile at you on a clear blue day, including the Everest. Curiosity and excitement are bound to keep your eyes quite busy. Sometimes it gets harder to say if it is a mountain or a cloud, given one is still fighting with his willpower to stay intact.

4. Landing On The World’s Toughest Ground

As the plane noses straight towards a hill, your virtual pilot will freak out why on earth the tube is descending instead of jumping over. Until after some time a small airstrip appears, out of nowhere.

Watch the world’s toughest airstrip approach bigger and bigger as you descend towards a small village around it. Feel the adrenaline pump up in coherence with the turbulence; hold on to your seats! An upward inclined runway, to decelerate the plane faster, where it needs to stop by the wall on the other side of it! No, this is not an emergency landing, it is just a normal landing at the Lukla airport.

That’s it; you’ve made it to the tiny Sherpa (mountain people’s) tribe. Lukla welcomes you with all its heart, for flying through one of the most challenging air tracks in the world. Stepping on the daredevils’ land is a reward in itself.

Wonder how houses and farming land adjust to one another on the terrace of a slope. Smile back at the natives, with the memory of a breath-taking 40 minutes flight still sending chills down your spines. The glory of standing at 2,850 meters above the sea, which only a few dare, is yours but the glory can only be seized after you take the adventurous Kathmandu to Lukla flight.

JH
Jeremy Heatley | Wed Jul 27, 2022
I was lucky enough to sit in the left front seat behind the pilot. Scary and fascinating at the same time. Wouldn’t have missed it and that was the start of my greatest adventure - the trek to EBC. Thanks Naba
Reply
RC
Rayan Charpantier | Mon Jan 24, 2022
Always go for a left seat by the window, this tip saved the day.
Reply
FC
Felix Crawford | Thu May 6, 2021
Really helpful piece of article. I was always wondering about how we may land or get to the world's dangerous airport and this blog eased my anxiety. Thanks.
Reply