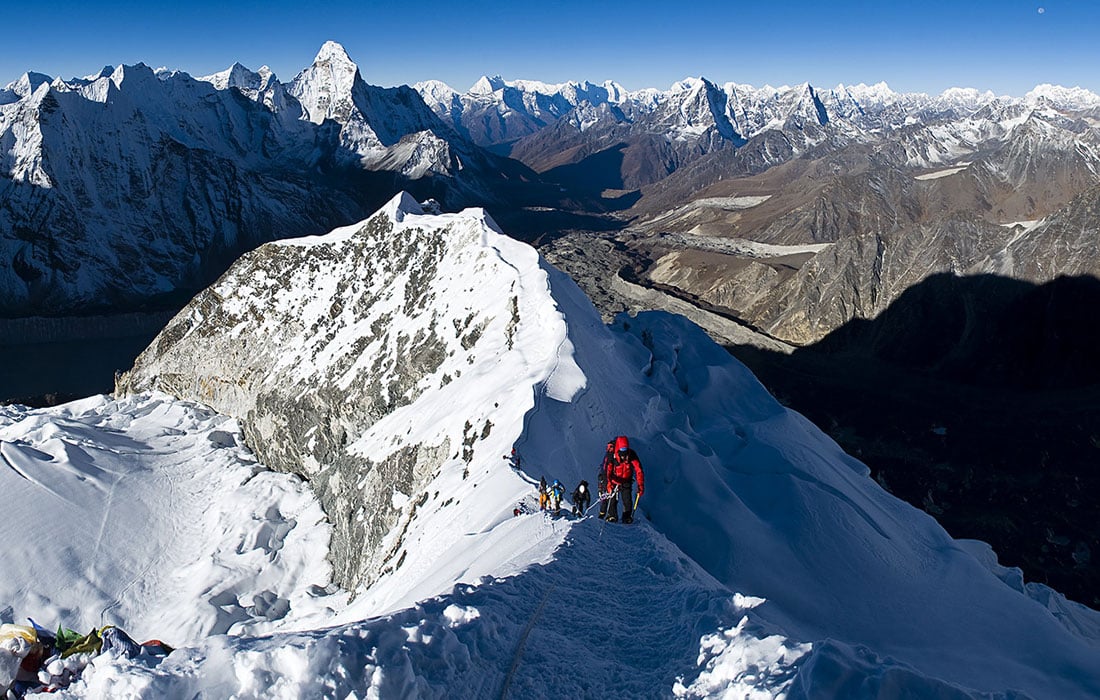 Mountains and Nepal are synonymous. With seventy-five percent of the country covered by mountains, Nepal is a playground for both novice and experienced climbers. If you are passionate about mountaineering, then Nepal is one destination you are sure to visit. Island Peak, a six thousand meter peak standing close to Mount Everest, is one of the most climbed peaks in Nepal. The best time to climb Island Peak is spring (March, April, and May) or autumn (September, October, and November). During these seasons the weather remains stable and the skies clear offering stunning views of the mountains.

If Island Peak is on your bucket list of 'must conquer peaks,' then here is some information that you might find helpful.

Where exactly is Island Peak?

Island Peak, locally known as Imja Tse, is situated in eastern Nepal's Solukhumbu or Everest Region. Rising to a height of 6189 meters, Island Peak lies very close to Mount Everest, Lhotse, and other 8000 and 7000 meter peaks. . Its geographical coordinates are 27° 55'N latitude and 86° 56'E longitude. Nepal Mountaineering Association has classified Island Peak as a ‘trekking peak in nepal’.

How to reach Island Peak?

The trail to Island Peak can be accessed by foot or via air. There are no motorable roads leading to the mountain. You either fly to Lukla from Kathmandu or walk from Jiri or Salleri to Lukla. From Lukla, you hike along the popular Everest Trek trail and choose the direct trail from Dingboche to Chukkung or take a detour to Everest Base Camp and Kala Patthar and later head to Chukkung via Lobuche.

The Island Peak Base Camp is only about six kilometers from Chukkung. You make your summit bid from the base camp. It takes only a day or two (if you decide to camp at high camp) to climb Island Peak and get back to base camp or Chukkung.

Once you reach the Island Peak Base Camp, you can summit the mountain in one day. If you think climbing it in a single day is too tedious, you can opt to camp at High Camp. Many climbers choose Island Peak for the short time required to reach the summit and return safely to base camp.

To reach the Island Peak Base Camp, you need to trek for eight or ten days from Lukla. One can climb up the mountain and descend to base camp the same day. You don't have to stay on the mountain for an extended period.

When should you plan your trip?

Spring and autumn are the ideal seasons to be in the mountains. But these are peak seasons with a lot of tourist traffic. If you want to escape the crowds and you are brave enough to tolerate the freezing cold, then a climbing adventure in early winter might sit right with you.  Two best/ Peak seasons to climb Island Peak – Spring and Autumn

What to expect in spring (March, April, and May)?

In the lower reaches, it can be warmer with more sun during the daytime. But beyond 4000 meters one can expect snow and temperatures below the freezing point.

The daytime temperature averages between 10 to 17 degrees celsius. At night the mercury dips below zero degree. It could get colder from Dingboche or Lobuche onwards.

The weather remains stable and there's not much precipitation, save for an occasional downpour with fog.

What to expect in autumn (September, October, and November)?

Autumn is considered the best season for Island Peak climbing. This season is characterized by warm and pleasant weather, no clouds, crystal clear views of mountains, and minimal precipitation. The average temperature ranges from 7 to 15 degrees celsius during this time.

On the downside, however, most people choose this season to travel in the mountains resulting in crowded trails and difficulty finding accommodation.

What to expect in the summer or monsoon season (June-July-August)?

Heavy rainfall with thunderstorms and fog makes the summer season or monsoon the least favored climbing season. The trekking trail becomes muddy and infested with leeches. Sometimes torrential downpour washes away sections of the trail. Moreover, clouds and mist hamper visibility and make it hazardous to walk in the wild.

What to expect in winter (December, January, February)?

Winter is the coldest season in the Nepal Himalaya and most trekkers and climbers prefer to stay away from the mountains during this time.

But of late, people favor early winter to make their trip due to the absence of the 'peak season crowd' and easy availability of flight and accommodation. Nothing sounds alluring enough than to be on the mountain with not a soul in sight.

Climbing Island Peak during winter can be challenging due to the build-up of snow and ice and extreme weather condition. But it's not impossible. One can get on the mountain provided one is mentally as well as physically prepared. Having the appropriate gear and equipment is also a must.

How difficult is it to climb Island Peak? 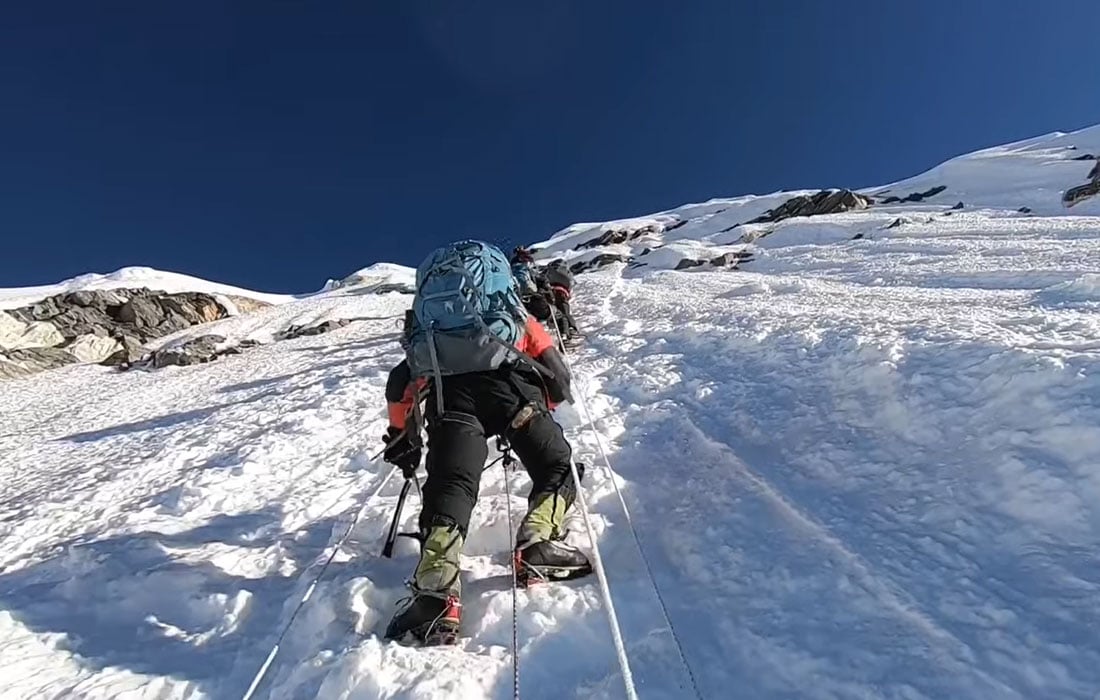 Island Peak is one of the easier 6000-meter peaks in the Nepal Himalaya that one can attempt to climb. Except for the last section leading to the summit, the route is straightforward and non-technical. Having said that one should bear in mind that the route is exposed and has a steep incline. The decrease in oxygen level and cold make the ascent difficult.

The Island peak difficulty level graded PD+ on the French Alpine Grade scale, Island Peak is an excellent introductory peak for novice climbers. The route has some technical sections but nothing too challenging a first-timer can't handle.

Depending on the prevailing weather conditions there may or may not be crevasses en route. If you come across one, you use a ladder (fixed by the sherpas) to cross it.

Island Peak is chosen for an acclimatization climb by seasoned mountaineers. Mount Everest expedition groups usually scale this mountain to acclimatize and practice their skills before ascending the eight-thousander.

Island Peak climbing can be combined with an Everest Base Camp Trek. Island Peak Climbing with EBC Trek takes around 19 days. But if you have already visited EBC and want to head straight to the mountain then a 14-day Island Peak Climbing itinerary might be right for you. There’s a shorter itinerary of four days (starting from Chukkung) for those on a budget.

The cost varies according to the type of services you will avail of during the trip. If you are booking with an outfitter, your cost would usually include the services of trekking and climbing guides, Lukla flight tickets, porter, teahouse accommodation, and food. You may have to pay more or less depending on the type of accommodation (luxury or standard teahouse) you choose during the trek.

You can cut down the cost significantly if you trek independently. But if you wish to support the local economy, we recommend that you employ the local guides and porters.

Some agencies like Third Rock Adventures offer climbers a cost-effective option to climb Island Peak. One can use the services of the climbing sherpas stationed at Island Peak Base Camp during the climbing seasons. You can get to the base camp on your own and pay only for the climbing services including climbing Sherpa guide who will help you get to the summit safely.

To climb Island Peak you need a peak climbing permit from the Nepal Mountaineering Association. The cost of the permit varies according to the season. A climbing permit for spring or autumn can be costlier than one for winter or summer.

What to pack for Island Peak expedition? 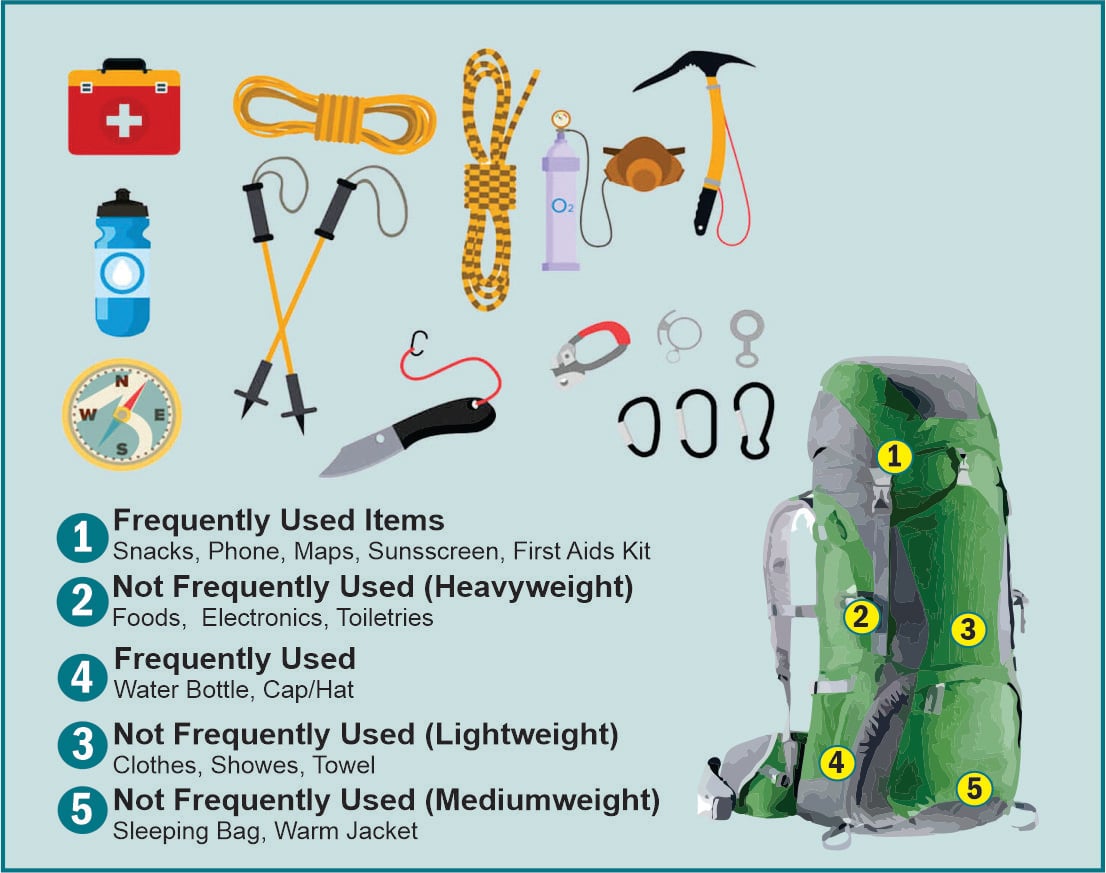 For a climbing expedition, the right gear and equipment matter a lot. Deep in the mountains, you are at the mercy of nature. And if you aren't kitted out properly, you will be risking your life.

Island Peak is one of the easiest 6000-meter Himalayan peaks you can aspire to climb. For beginners as well as experienced climbers, this mountain offers an exceptional Himalayan peak climbing experience.

Island Peak offers the right balance for climbers of all skill levels - neither too difficult nor too easy. If you want to climb Island Peak, the best time would be either spring, autumn, or early winter.