How Difficult is the Annapurna Base Camp Trek?

The trek to Annapurna Base Camp is considered as the ideal Nepalese trek. But how difficult is the Annapurna Base Camp Trek? Compared to the popular Everest treks, the trek to ABC is shorter, lower and easier and the ultimate goal of the base camp is easily within reach of any determined and reasonably fit trekker.

The cold, dawn sun casts an orange glow across a great cirque of vertical ice and rock that reaches upwards to the clenched knuckle-like summit of the tenth highest point on Earth, Annapurna 1 (8091m). Far, far below, in the mountains shadow stand a group of awed trekkers. They have spent the last week determinedly walking the varied trail to the famed Annapurna Base Camp and now they have reached their reward.

An ideal first Nepalese trek, the Annapurna Base Camp trek (also known as the Annapurna Sanctuary Trek) might just be the single most popular trek in Nepal and it’s easy to see why.

By Himalayan standards, the Annapurna Base Camp trek is not a difficult trek. It involves little preorganization and, in just seven to twelve days (depending on route choice), it whisks the lucky hiker through lowland rice fields, rhododendron forests, imposing gorges, alpine meadows and traditional villages before finally reaching one of Nepal’s most majestic mountain views. 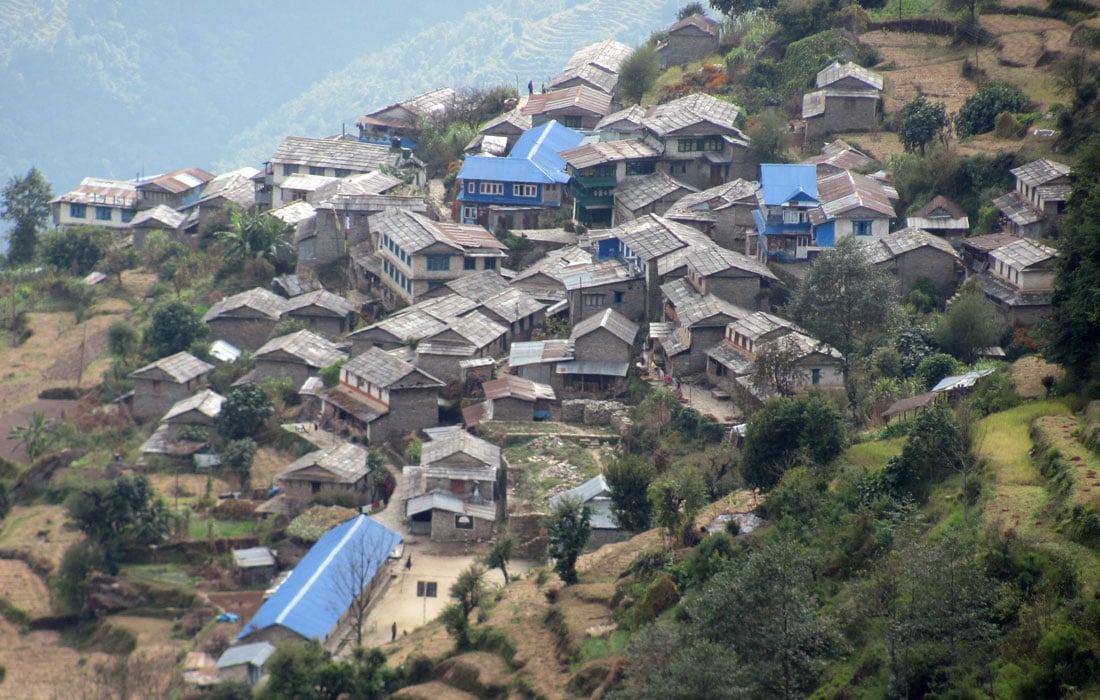 Combine the breath taking scenery with ease of access (the trails begin only about an hour outside of Pokhara) and great facilities along the route, including some of the best trekking lodges in Nepal, and a healthy mix of international trekkers and warm hearted locals to keep you company along the trail and it’s easy to see why the Annapurna Base Camp Trek is so highly regarded.

But let’s look a little closer at the difficulties of the Annapurna Base Camp trek.

Is Annapurna Base Camp A Difficult Trek?

The answer to this rather depends on your perspective and previous walking experience. Any Himalayan trek tends to involve a lot of up and down and this, combined with the lack of oxygen during the higher stages of this trek can drain energy fast. But, compared with many other Nepalese treks this is one of the shorter, lower and easier treks and the ultimate goal of the base camp is easily within reach of any determined and reasonably fit trekker. 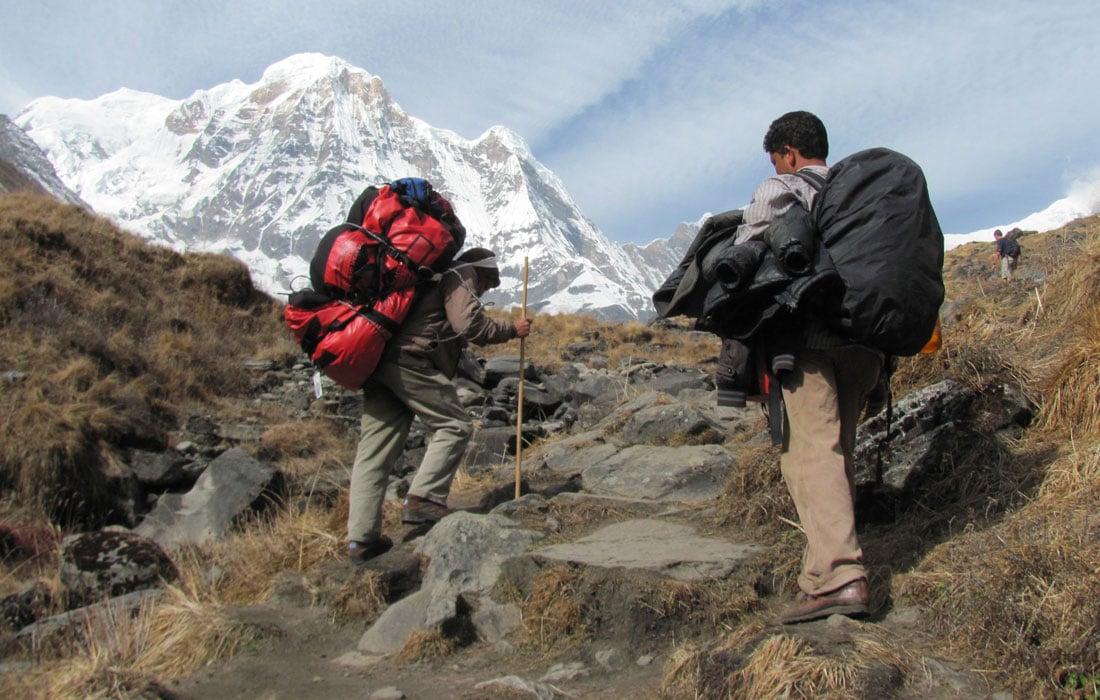 And when we said to expect a lot of up and down did we mention the steps? No? Ah, well yes. There are a lot of rough-hewn, stone steps on this trail. And guess what? Not one of them is the same size as the other. While this might not sound like too much of a difficulty be assured that after a day hauling yourself up and down thousands of steps your leg muscles are going to hate you!

How Long Is The Annapurna Base Camp Trek?

If you’re a newbie trekker you might wonder if you’ll have the stamina to keep placing one foot in front of the other for days on end. The good news about the Annapurna Base Camp trek is that you can tailor its length to suit. At its shortest it can be completed in just a week (but this can involve some long and difficult days), but you can also happily spin the trek out over twelve days. Most people allow ten days which is short enough to mean that enthusiasm doesn’t wane, but long enough to make it feel like a real journey.

Over the course of this ten days you will cover around 110km of territory. That makes for an average of just ten kilometres per day. Not difficult you might say, but what this distance doesn’t take into account is that almost none of that 110km is on a pleasant, easy, flat trail. Almost the whole way is either up or down and sometimes it can feel like you’re doing both at the same time! And that gets exhausting.

On average you should expect to spend five hours a day non-stop walking. Some days are shorter. Others are quite a lot longer. 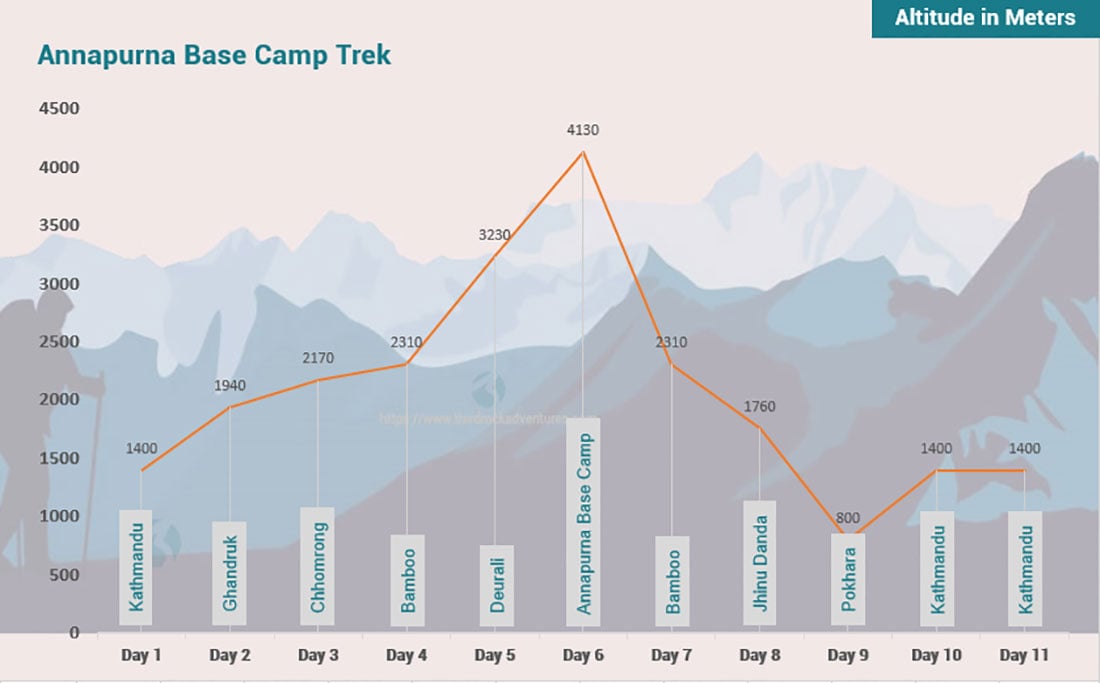 This is the high Himalaya and the loftiest point of this stunning trek is a breathless 4130m. Altitude sickness can occur at any altitude above about 3000m, so yes, the risk is real. The good news though is that the rate of altitude gain on this trek is relatively gentle and this is important because the faster you ascend, the more likely altitude-related problems are. Take it nice and slow, respect the recommended nightly rest stops (they’re set up in such a way to try and ease the risk of altitude sickness) and don’t feel pressurised into pushing on faster and harder than you’re comfortable with and you should be okay.

Luxury In The Mountains

After a difficult day panting up and down mountain slopes nothing can revive the spirits like a good hot meal and a comfortable bed. And the facilities for trekkers along the Annapurna Base Camp trek are as good as anywhere in the Nepalese mountains. Most of the many trekking lodges have varied menus with everything from yak meat steaks to Nepal’s famed apple pie on offer. Most lodges will have some form of heating, private rooms, electricity, hot showers and even wi-fi. This is teahouse trekking with all the frills!

So, Are There Any Negatives?

Put simply. Not really. However, that combination of unsurpassed mountain scenery, great facilities and easy access means that this is certainly not a quiet, meditative walk. Tens of thousands of trekkers can walk this trail each year and sometimes local culture can be consumed by international trekking culture. Lodges can be booked out in high season. Try and get to the night stop early, or join an organised camping trek to avoid the worry of finding a bed or ask your trekking agency to try and reserve rooms in advance (though be warned that reservations are not always honoured!).

How Can I Make It Easier? 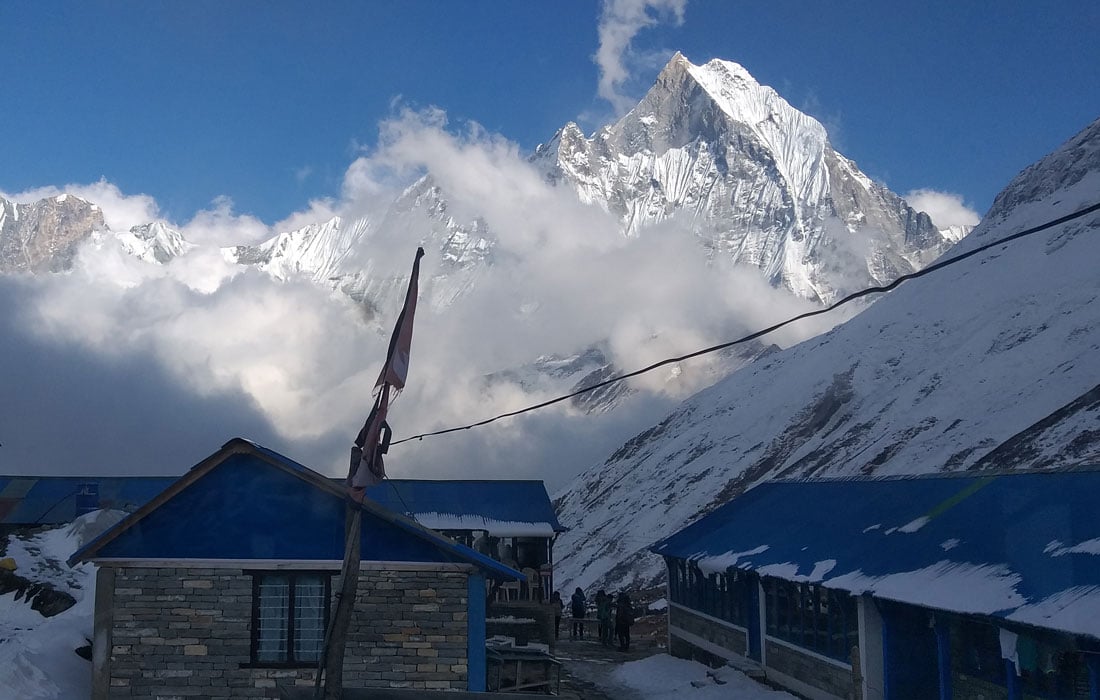 You know the old mantra, ‘No pain. No gain’? Well, no four words could better sum up the Annapurna Base Camp trek. Unless you’re Olympian walk fit and with a whole tonne of Himalayan walking experience behind you then you will have moments – most likely when faced with yet another blistering uphill section or knee jarring descent – when you want to chuck it all in. But in the end everyone agrees it was worth every step. And, there are some ways of easing the difficulty.

Probably the most effective way is to lighten your load. You’ll probably see plenty of independent trekkers sweating, cursing and panting under a backpack almost the same size of them. Splash out a mere handful of dollars extra a day on a porter who will carry the bulk of your gear and you’ll find yourself skipping joyfully along the trail carrying nothing but a light bag with just the items you need for that days walk.

Do I Need A Guide?

In regards to route finding the Annapurna Base Camp trek is not difficult and a guide is not required for this aspect of a trek. However, this is still the high mountains: the weather changes fast and a guide knows the trails, rest stops and health aspects of mountain walking better than you do. A good guide will also point out interesting sights, explain the local culture and generally just ensure your trek is a rewarding and safe one. For this reason we always recommend you take a guide on any Himalayan trek.

Are Some Seasons More Difficult For Trekking Than Others? 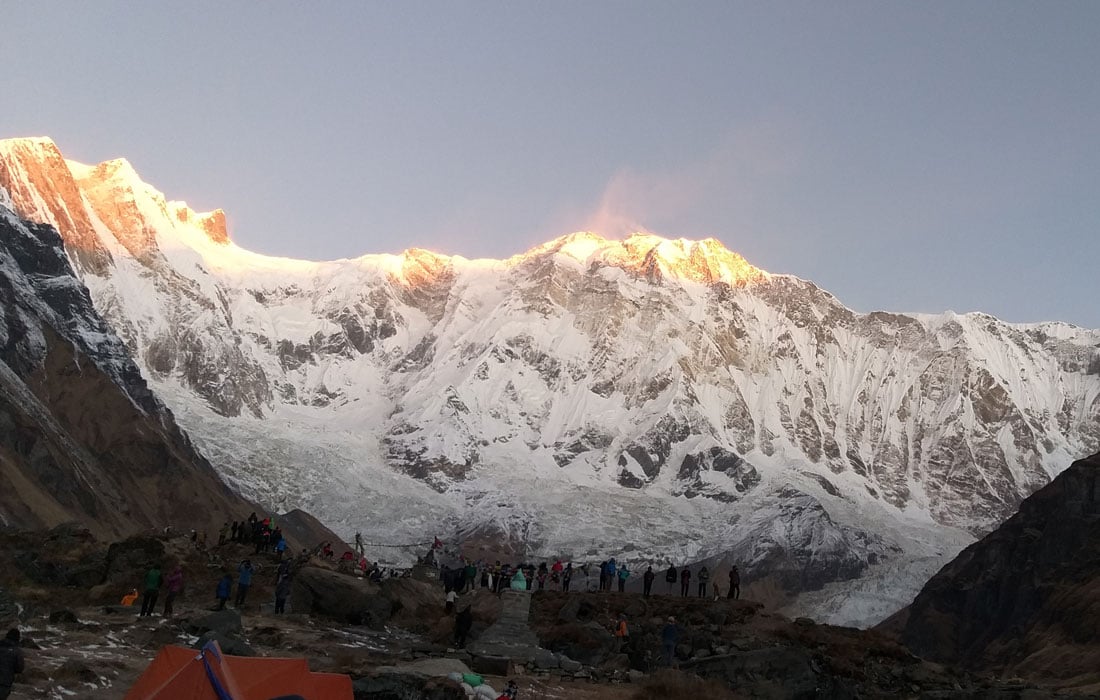 Yes! As with most Nepal treks there are four main seasons. The post-monsoon season of October-November is a great time to be on the trail. The temperatures are pleasant. The skies clear. The land is green and there are plenty of people to talk too and gain encouragement from. The March-April period is also similar. But, this is when the trails are busiest and if you’re the last one rocking up to a lodge you might find no beds are available. December to February is much quieter, but also much, more difficult thanks to it being much colder and snow is possible. You need to be well-equipped to trek at this time and you ought to build in extra days to sit tight if bad weather rolls in. This is a better period for more experienced trekkers. Finally there’s the June-September monsoon period and that can be summed up easily. Don’t trek Annapurna Base Camp during the monsoon. There will be a lot of rain and mud and minimal mountain views.

Alright, alright. Annapurna Base Camp trek is quite rightly one of the classic walks of the Himalaya. It’s challenging enough for most to feel like a genuine adventure, but not so difficult that only muscly Hercules types can complete it! Overall, we’d class it as a moderate level walk and a perfect first Himalayan trek, but also one where the scenery is such that a tear of joy can be brought to the eye of even hardened mountain veterans.