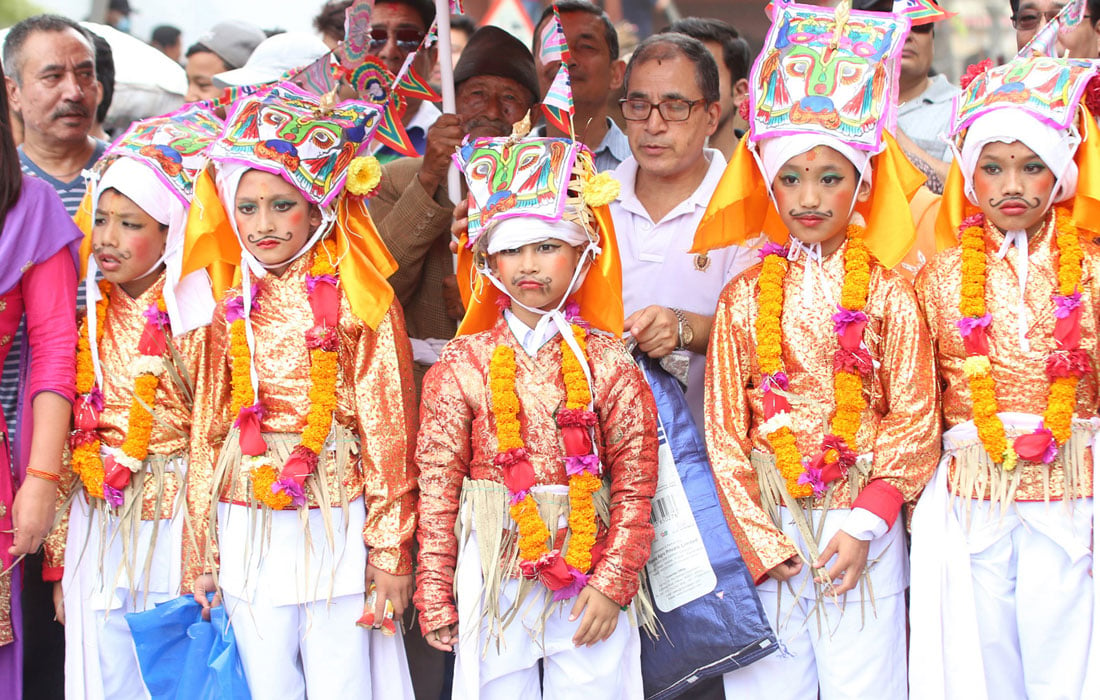 Gai Jatra is celebrated in Kathmandu to commemorate the death of loved ones by the family. It is a street festival filled with joy and laughter. ‘Gai’ means cow in Nepali. The bovine is sacred to Hindus and it is believed that cows help the dead to reach heaven. This festival which falls in July or August, is celebrated is to find comfort in the knowledge that everybody loses a loved one to death.

There is a very interesting story as to how and why this festival started. During the reign of Pratap Malla (1641-1674), there was an unfortunate death of the king’s second eldest son-Chakrabartendra. The mother of Chakrabartendra, fell into a deep depression following the death of her favorite son. The sadness was so deep that she spent the days wallowing in her misery. Pratap Malla loved his queen dearly and couldn’t bear to see her in such a miserable state. He brought the best entertainers to the court in an attempt to better the mood of his beloved queen but all effort fell in vain. Nobody could make her smile, let alone make her laugh.

In desperation, the king asked his subjects to organize a parade in which one member of every family that had lost a beloved one would take part. He ordered everybody to dress in a crazy costume and drag a cow along behind them. People, who couldn’t bring a cow, brought a child dressed up as a cow.

The king allowed all sorts of buffoonery and everybody was allowed to make fun of each other. Jokes were made on the existing social norms and even the rich and powerful were not spared from being made fun at. The parade was made to pass along the main gates of the royal palace, from where the king and queen could watch the parade.

When the parade drew near the palace gates, the king pointed out to his queen that every participant in the parade had lost a loved one, yet they were here celebrating their memory by having a good time. The queen finally realized that she was not the only one aggrieved by her loss, many others were too. Yet they were out on the streets, dressed in comical outfits, cracking jokes and laughing till their stomach hurt. Watching the merriment, the queen finally smiled and thus the festival stuck on.

Today the very popular Gai Jatra is celebrated with much pomp and show. In Kathmandu Durbar Square, along with the usual procession of people celebrating the life of their dead relatives, gay pride parade is held. Stand-up comedians take to the stage and ridicule the government and administration. News publications run satires and parodies. It is a day filled with laughter and mirth.