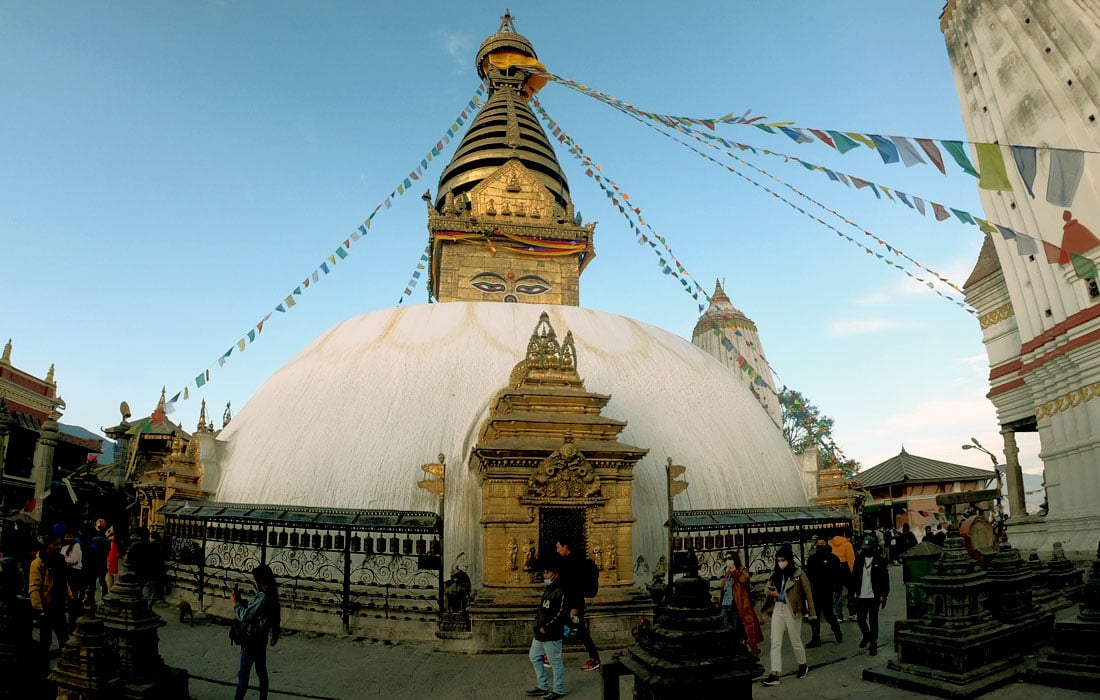 Your trip starts with a scenic flight to Kathmandu where you can enjoy the spectacular view of the Himalayas. A representative from Third Rock Adventures will welcome you at the airport and will take you to your hotel. Take some rest in your hotel or self-explore the nearby area. On the following day, you will be going on a sightseeing tour of Kathmandu. Visit the sacred temple of the Hindus, Pashupatinath located on the banks of the holy Bagmati River. Your next destination will be Boudhanath, the famous Buddhist stupa which is the biggest stupa of Nepal and one of the biggest spherical stupas in the world.

Further, you will be climbing up the hilltop Stupa of Swayambhunath which is one of the significant places of Buddhists. It is also popular as the Monkey Temple due to the abundance of notorious monkeys in the area. The last destination of the first-day tour will be Kathmandu Durbar Square also known as Basantapur Durbar Square. The temples, monuments, statues and edifices represent the fine craftsmanship of ancient times.

On the following day, you will be visiting Patan Durbar Square which lies around 5 kilometers southeast of Kathmandu. Observe the fine wood, stone and metal carvings in various temples, statues, and monuments. Explore the popular places in the durbar square complex including Patan Museum with antique artifacts, 14th century Krishna Mandir, and The Golden Temple.

The next destination on the second day of the tour will be Bhaktapur Durbar Square which can transport you to a different era. The temples, monuments, and edifices reflect the fine craftsmanship of ancient times. Moreover, you will be visiting Golden Gate, 55 window palace, Nyatapola, Taumadhi Square, Mahadev Temple, Dattatreya Square and others. Later you will be driving to Dhulikhel, a popular weekend getaway place near Kathmandu.

On the fourth day of the trip, you will be going on a day hike to the Namo Buddha temple which is one of the significant religious sites for Buddhists. It is the place where Prince Mahasattva offered himself to the dying tigress and her cubs to save their lives. On the hike, you will be walking past hillside villages and farms. You will get a closer look into the daily lives of the Newar and Tamang ethnic groups. Enjoy a scenic view of verdant hills and snowy mountains from Namo Buddha. Visit the Buddhist Gompa near Namo Buddha which offers astounding views of the mountains including Gaurishankar Himal, Langtang Lirung, Ganesh Himal and others. You will be hiking back to Dhulikhel and after having lunch you will be driving back to Kathmandu. On the following day, you will be taking an international flight back to your home with wonderful memories to cherish.

Short Ktm Tour
Our Lukla flight got canceled for 3 days in a row and had to cancel. But before going home back, we wanted to explore some part of Nepal and that is w...

Owen Harrison   | November 13, 2019
Magical Kathmandu
Enjoyed exploring Kathmandu valley. Boudhnath stupa was an amazing place in Kathmandu. It was buzzing, and there were lots of foreign travelers like m...

Astounding views of the Himalayas and verdant hills will greet you as you approach Kathmandu. A representative from Third Rock Adventures will greet you at the airport. You will be driving to your hotel. Checking into the hotel, you can relax. If you wish you can stroll on the lively streets of Thamel and enjoy your evening. 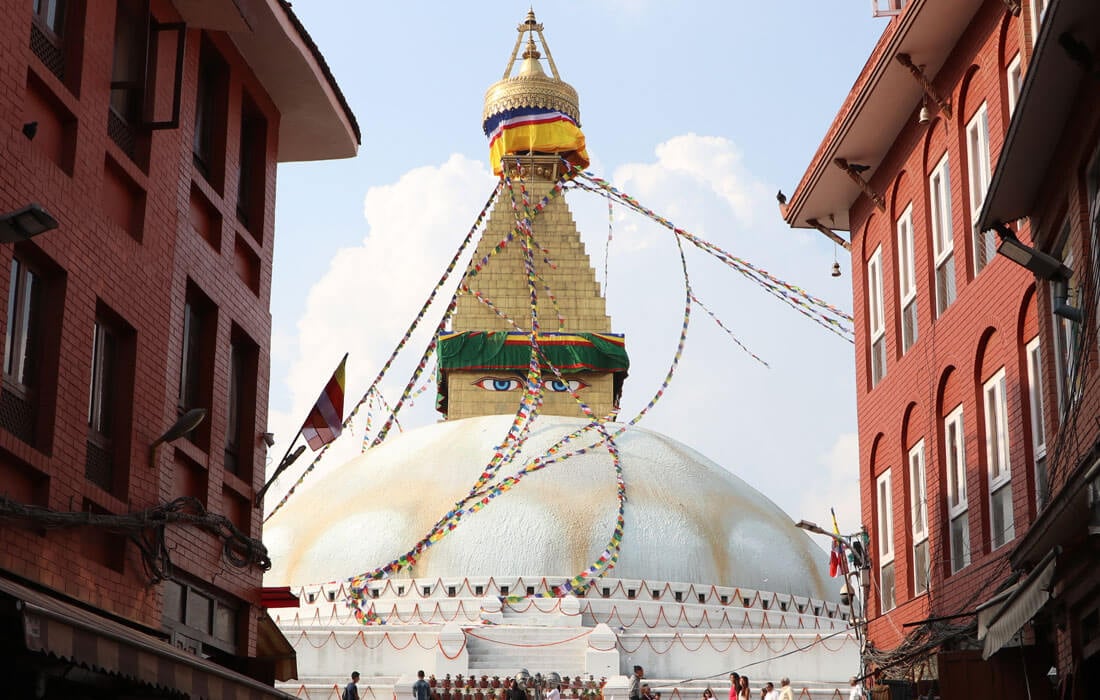 Today you will be visiting four important UNESCO World Heritage sites in Kathmandu including Pashupatinath, Boudhanath, Kathmandu Durbar Square and Swayambhunath. Moreover, you will get to see unity in diversity among different religious and cultural groups.

You will start the trip with a visit to Pashupatinath which lies around 5 km northeast of Kathmandu. The revered Hindu temple is dedicated to Lord Shiva. Thousands of Hindu pilgrims from different parts of the world pay homage to this temple that dates back to the 5th century. The main pagoda-style temple features a golden pinnacle while its four walls are covered in silver. There is an open cremation site of the Hindus near the Pashupatinath temple. It is believed that those cremated on the banks of the river are believed to find their way to heaven. Your next step is one of the holy Buddhist sites of Nepal, Boudhanath.

The biggest stupa in Nepal, Boudhanath is the center of Tibetan Buddhism. The giant dome-shaped stupa with a gilded tower features the watchful eyes of the Buddha. Also, the colossal 36-meter-high stupa of Boudha dominates the skyline. It is said to inhume the remains of Kassapa Buddha. You will see pilgrims circumambulating, lighting butter lamps and offering prayers early in the morning and evening.

Further, you will be visiting the Kathmandu Durbar Square which reflects the fine craftsmanship of medieval times. The durbar square is filled with temples, statues, edifices, palaces and others. The durbar square is lively with people worshiping, feeding birds, shopping and selling goods. Visit Kaal Bhairav, and also pay a visit to the Kumari Ghar home to the living goddess of Nepal.

The last stop for the day will be the hilltop temple Swayambhunath. A white dome-shaped stupa with13-tiered golden pinnacle represents the 13 steps to enlightenment. You can enjoy the view of Kathmandu city from the top. It is one of the revered places for Buddhists in Nepal. The temple is also known as the Monkey Temple due to the abundance of the monkey in the area. 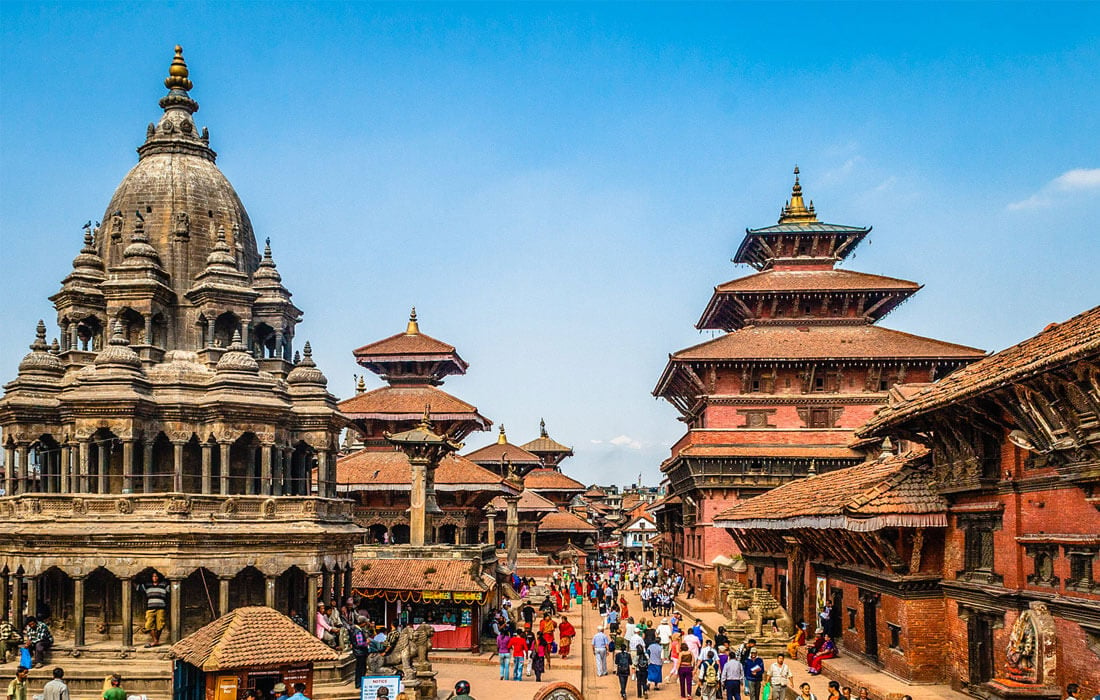 On this day, you will be visiting Patan Durbar Square and Bhaktapur Durbar Square. Patan Durbar Square is just 5 km away from Kathmandu. The durbar square features incredible Newari architecture dating back to the 14th century. Witness the beautiful wood carvings, stone works and metal works on temples, statues, monuments and edifices. Explore the Golden Temple featuring the golden statue of Shakyamuni Buddha and Krishna Mandir which was built in the 19th century. Go to the Patan Museum featuring wonderful artworks from ancient times.

Later you will be visiting Bhaktapur Durbar Square which is around 12 km away from Patan. The durbar square is filled with medieval architecture that will take you to a different era. Marvel at the beautiful Golden Gate and 55 window palace. Observe Nyatapola which is symbolic of 5 basic elements including water, earth, fire, sky and wind. Visit Siddha Pokhari, Taumadhi Square, Mahadev Temple, Dattatreya Square, and others. Also, visit The Art Gallery. Do visit the popular Potter’s Square where you will see the traditional way of doing pottery by locals.

Further, you will be taking a wonderful drive to Dhulikhel from Bhaktapur which is around 16.3 km and takes around half an hour. Dhulikhel is one of the popular gateway destinations near Kathmandu to observe the high Himalayas. 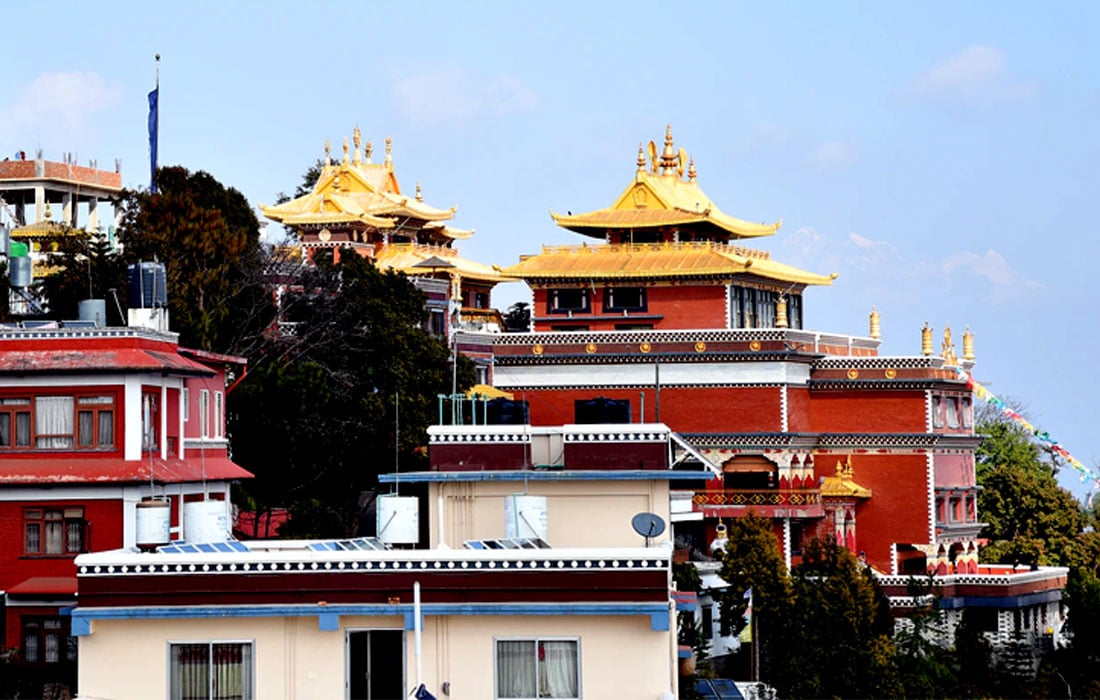 Today you will be hiking up to the sacred Buddhist temple of Namo Buddha. The hilltop temple surrounded by greenery is popular among tourists and locals alike. On your way, you will be passing Banepa and Panauti which is best known for their culture as well as scenic beauty. On the way, you will get to enjoy the scene of verdant hills and snowy mountains. It takes roughly three hours to complete the hike which passing through country roads, beautiful villages and green farms. Moreover, you will observe Newar and Tamang ethnic groups and observe the daily lives of the locals.

Your hike ends at the Buddhist shrine of Namo Buddha which is situated at an altitude of 1,750 m/ 5,747ft and overlooks the stunning panoramic view of the verdant hills and snowy mountains. This place holds a special place in Buddhism.

As per legends, Prince Mahasattva went on a hunting trip and during that time he encountered a weak and starving tigress lying with her cubs on the ground. The tigress was in a critical condition and required something to eat immediately. He couldn’t see the tigress starve to death and could find anything to feed it either. Thus, he offered himself. A shire showing the event on a black stone slab is present here. Moreover, it is said that Lord Buddha was once born as Prince Mahasattva.

There is a Buddhist Gompa near Namo Buddha which also functions as the school for monks. You can enjoy the stunning panoramic views of the mountains including Langtang Lirung, Dorje Lakpa, Gauri Shankar and others.

After the day hike, you will be taking a drive back to Dhulikhel and after having lunch you will be returning to Kathmandu. Stroll in the streets and do some last-minute shopping for your family and loved ones before leaving the next day.

It is the last day of your cultural tour and you will be leaving for your home with everlasting memories of the trip. A representative from Third Rock Adventures will drop you at the airport a few hours before your scheduled flight.

100%
Based on 4 reviews
Need Help Booking?
Are you satisfied with this itinerary?
GET A TRIP QUOTE
Not Really Satisfied?
Customize This Trip
Talk with our local travel specialist
Chat via WhatsApp

Kathmandu and Pokhara Sightseeing with Hiking and Paragliding -5 Days

Australia
Feb 10, 2020
Short Ktm Tour
Our Lukla flight got canceled for 3 days in a row and had to cancel. But before going home back, we wanted to explore some part of Nepal and that is when Naba suggested this tour. Initially we wished to switch to a short trek, but my wife agreed on this tour. We explored a whole lotta Kathmandu valley. The world-famous sites were an amusement to explore. We strolled around Kathmandu valley, hiked to the monastery perched in a tranquil place. It was a great experience and a well-deserved holiday. Thanks to Third Rock Adventures for everything.
Owen Harrison

United States of America
Mar 24, 2019
Magical Kathmandu
Enjoyed exploring Kathmandu valley. Boudhnath stupa was an amazing place in Kathmandu. It was buzzing, and there were lots of foreign travelers like me. We also hiked to the monastery on the outskirts of Kathmandu. It was a great short hike. The tour guide was friendly with huge information about the places.
Thomas Foster