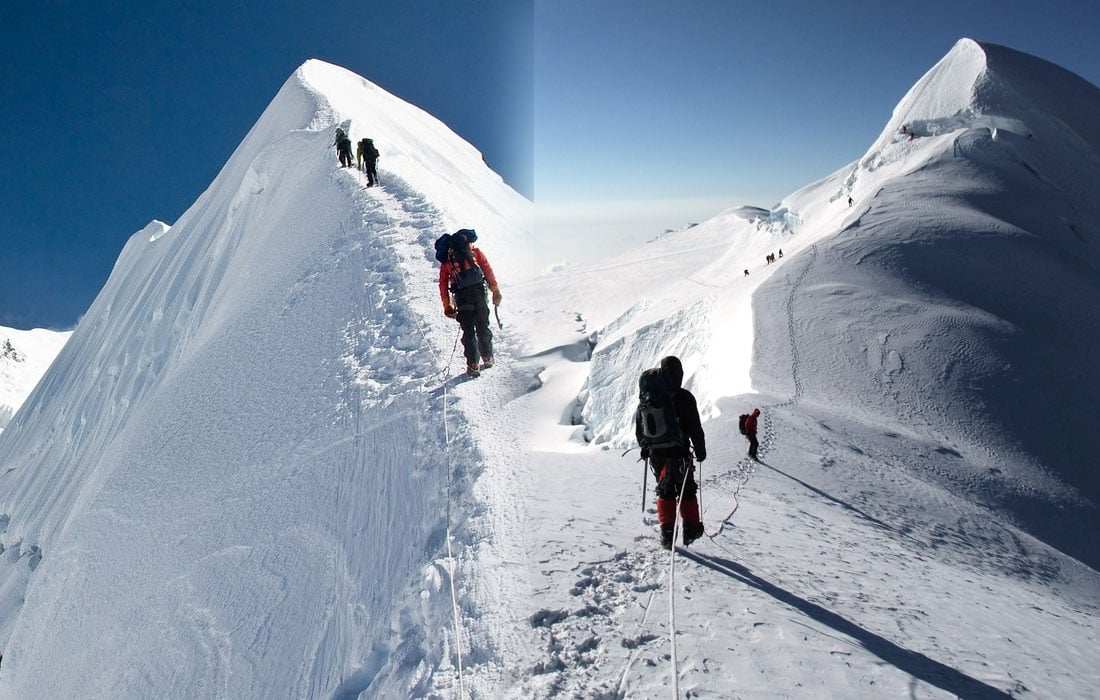 With 8 of 14 eight-thousanders and 326 climbing peaks, Nepal is a trekkers paradise and a wonderland for trekkers and climbers alike. The Nepal Himalaya calls thousands of avid trekkers, novice climbers, and elite climbers every year. 326 mountains in Nepal are open for mountaineering expeditions. Among them, 33 peaks are classified as trekking peaks by the Nepal Mountaineering Association (NMA). Talking about trekking peaks, Mera Peak and Island Peak are the firm favorites of every climber.

Mera Peak, at 6,476m, is the highest trekking peak in Nepal. This peak (Mera Central, 6,461m) was first ascended on May 20, 1953, by Jimmy Roberts and Sen Tenzing, and since then, this peak has lured thousands of climbers, especially novice climbers. The climbing route entails high-altitude glacier walking and a technically straightforward ascent.

The fact that only basic mountaineering skills are required to conquer the altitude makes this peak one of the most sought-after climbing peaks by novice climbers. An expedition to the top of Mera Peak rewards breathtaking views of Mount Everest, Kangchenjunga, Lhotse, Makalu, Cho Oyu, and surrounding peaks. 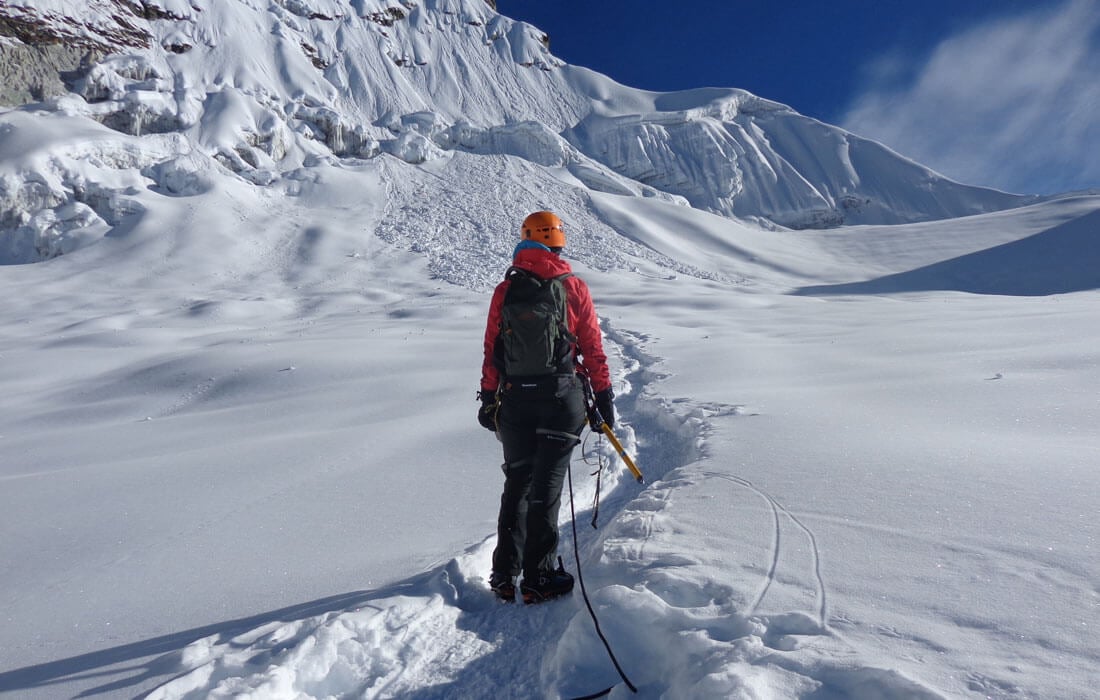 Island Peak or Imja Tse is the 2nd highest trekking peak in Nepal, first ascended in 1956 by Hans-Rudolf Von Gunten, a Swiss chemist and mountaineer. To climb Island Peak, you have to trek from Lukla all the way to Chukkung, spend one or two nights in Island Peak Base Camp at 5087m, ascend to High Camp, and finally to the top.

Above base camp, rocky steps, glaciers, and ice slopes are a bit challenging. The top part of the Island peak is slightly technical due to steep climbing. From the top of the peak, one can admire stunning views of Everest, Lhotse, Nuptse, Changtse, Ama Dablam, and surrounding peaks.

You can view the giant peaks of Nuptse (7,879m), Lhotse (8,501m), Lhotse Middle Peak (8,410m), and Lhotse Shar (8,383m), making a semi-circle to the north from Island Peak summit. The 360 panoramic views of Makalu (8,475m) in the east, Baruntse, and Ama Dablam in the south are mesmerizing. Mount Everest is a mere ten kilometers away to the north, and the view will be blocked by the massive wall of Mt. Lhotse above the summit.

Mera peak is comparatively easier than Island Peak, albeit it is higher than Island Peak. Mera Peak holds fewer challenges in comparison to Island Peak. Island Peak comprises one technical section through ice slopes, glaciers, and crevasse. Technically speaking, Island Peak demands the use of fixed ropes set up for climbing to the summit ridge. In contrast, Mera Peak is considered a technically straightforward ascent. However, Mera Peak Climbing also involves fair use of fixed rope but is straightforward. Climbers with little or no mountaineering experience can climb these two peaks. However, for Island Peak Climbing, climbers must be ready for strenuous ascent to the summit ridge using fixed rope through crevasse and ice slopes.

Mera Peak climbing itinerary entails about a week of trekking to Mera Peak High Camp at 5,780m before climbing the summit. The trekking trail stretches to Hinku Valley through lush jungle and remote valleys. After arriving in Lukla, the trail continues to Hinku Valley. Paiya, Kothe, Panggom, Thankak, and Khare are the major resting spots before Mera High Camp. From the camp, gradually ascend using fixed rope and jumars to the summit. You can accomplish the Mera Peak trek and climb in about 18 days.

Spring and autumn are deemed the best seasons to climb Mera Peak and Island Peak. It is recommended to climb the peak in late April, May, September, October, and November. And if you want us to be specific, October and May are the best months for a climbing expedition. Winter and monsoon are considered an off-season for mountaineering. Notwithstanding this, some climbers attempt to climb the peak in the winter season. The drawbacks of climbing in the off-season are that you will have to be ready to tackle unforeseen situations, tagged with bad weather: heavy snowfall, the possibility of flight delays and cancelations, and less visibility.

During the month of spring and autumn, the weather remains stable, and the sky is clear, bestowing stunning views of the mountains. One notable perk of climbing in spring or autumn is the ideal temperature throughout the day. Climbing during the best season is a must, especially for novice climbers, to revel in the best climbing experience.

For Mera Peak Climbing, you need to obtain the following permits:

Makalu Barun National Park Permit can be collected at Tourist Service Center, Bhrikutimandap, Kathmandu, or Kothe. This permit costs NRs. 3,000 per person for foreigners and NRs. 1500 per person for climbers from SAARC countries.

The Mera Peak Climbing Permit fee depends on the season; the permit is issued for different seasons, and the price varies accordingly.

For Island Peak Climbing, you need to obtain the following permits:

Khumbu Rural Municipality Entrance Permit costs NRs 2000 per person. You can collect this permit in Monjo or Lukla. Please note that you cannot get this permit in Kathmandu.

To enter the Sagarmatha National Park, trekkers/climbers must pay for the entry permit that costs NRs. 3000 per person. You can collect this permit in Monjo at the entrance of the park.

The cost of climbing Mera Peak or Island Peak can vary from company to company, given the fact that many factors come into play. The route, duration of the expedition, permits, and accommodations are some elements determining the cost of the Mera Peak Climbing and Island Peak Climbing. Besides, gears and equipment, and flight costs also contribute to the total cost of climbing. The cost for climbing these two peaks is similar, generally ranging from USD 2000- USD 4000. However, some companies might entice you with low prices, but there's a high chance that you might have to compromise, and this could be detrimental considering the climbing experience.

If you are unsure, you can contact us; we will be happy to help you. We will connect you with the mountaineering leader and travel consultant, who will help you in every way possible.

SS
Simon Schwartz | Thu May 19, 2022
We can trek to EBC and climb Mera Peak. Would be best adventure.
Reply
AC
Anderson Conner | Sun Jan 23, 2022
Can you guys offer Mera peak Climbing for $2500?
Reply
TE
Travel Expert | Sun Jan 23, 2022
You can customize your itinerary and based on that you can adjust the price. For that, you can email us at [email protected]
Reply
NA
Namazio Anania | Fri Jan 14, 2022
I would recommend going for Mera Peak first and then only Island peak. And if you want to choose one of them, do Mera PEAK, because it is a bit easier in terms of technicality.
Reply
RS
Robert Smith | Sun Jul 4, 2021
Both the peaks seemed to be comfortable for novice climbers like me. I was thinking of doing a peak climbing in Nepal and this article helped me decide which to do. Though I preferred Mera peak, I would actually go for Island Peak at first and then to Mera.
Reply