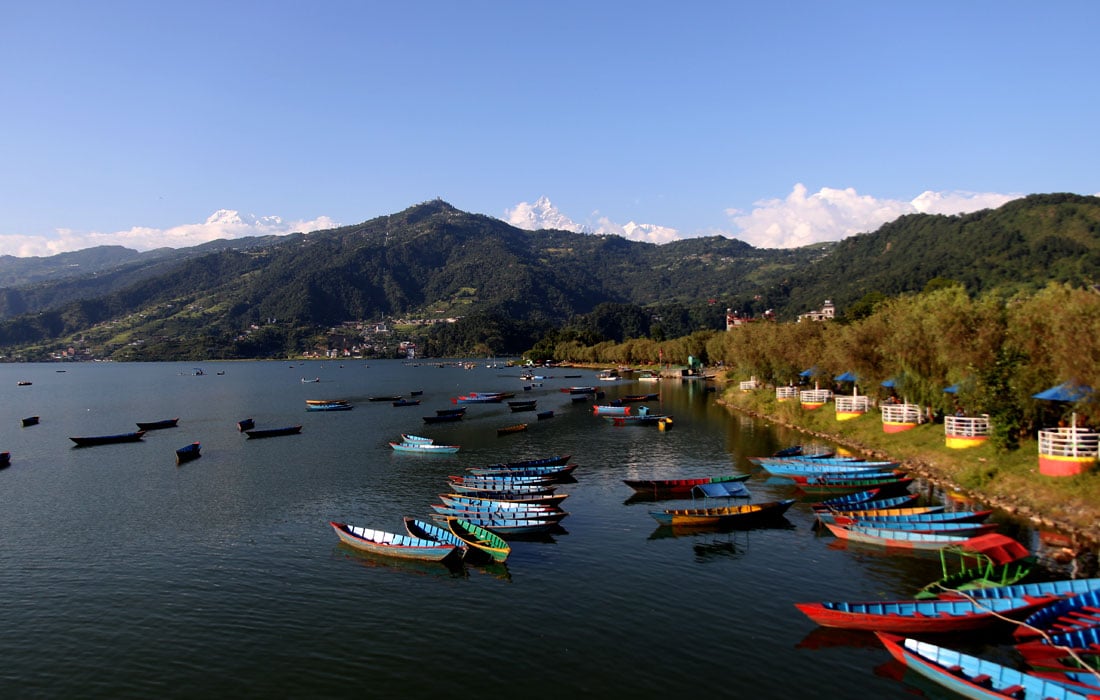 Kathmandua and Pokhara Sightseeing with Annapurna Heli Tour is one of the most exciting short city and cultural tours with awe-inspiring views of the Annapurna region mountains. The five days tour that begins with sightseeing in the religious heritage sites of Kathmandu progresses on to the natural and cultural sites of Pokhara. The cherry on the top is undoubtedly the bird's eye view of the Annapurna Massif from the Annapurna Base Camp.

The tour begins from the city of temples, Kathmandu, where we visit Durbar Square, Boudhanath stupa, and Pashupatinath before progressing to Bhaktapur Durbar Square. After a night at the Nagarkot Hill station, enjoy an early sunrise view, then fly off to Pokhara. At Pokhara, sightseeing continues to Phewa Lake, Bindhyabasini temple, Gupteshwor, Bat cave, Davis Falls, Seti River Gorge, and Tibetan villages.

After the sightseeing, the tour ends with an exciting helicopter flight to the Annapurna Base Camp and back to Pokhara, then to Kathmandu.

Kathmandu and Pokhara Sightseeing with Annapurna Heli Tour is the perfect tour for all ages and groups who have limited travel time. It is for all nature and culture enthusiasts who want to explore the beauty of Nepal.

Antia Pastor   | April 06, 2022
KTM PKR AND HELI TOUR
The service was fantastic and had timely heli tour to ABC. I didn't have to think and worry a bit. It was one of the best trips I had in Nepal....

Welcome to the land of Himalayas, culture, and heritage, Nepal! As you land at the international airport, you will get a whiff of fresh air and views of the Himalayas on the horizon. Following the customs check in the airport, you will be greeted by our Third Rock Adventures representatives. We will drive you to the hotel in Thamel, a tourist hub just 5km away from the airport.

After relaxing at the hotel, head out to explore the lively streets of Thamel, enjoy multi-cuisine and even visit our nearby office. Enjoy a warm Nepali dinner in the evening. 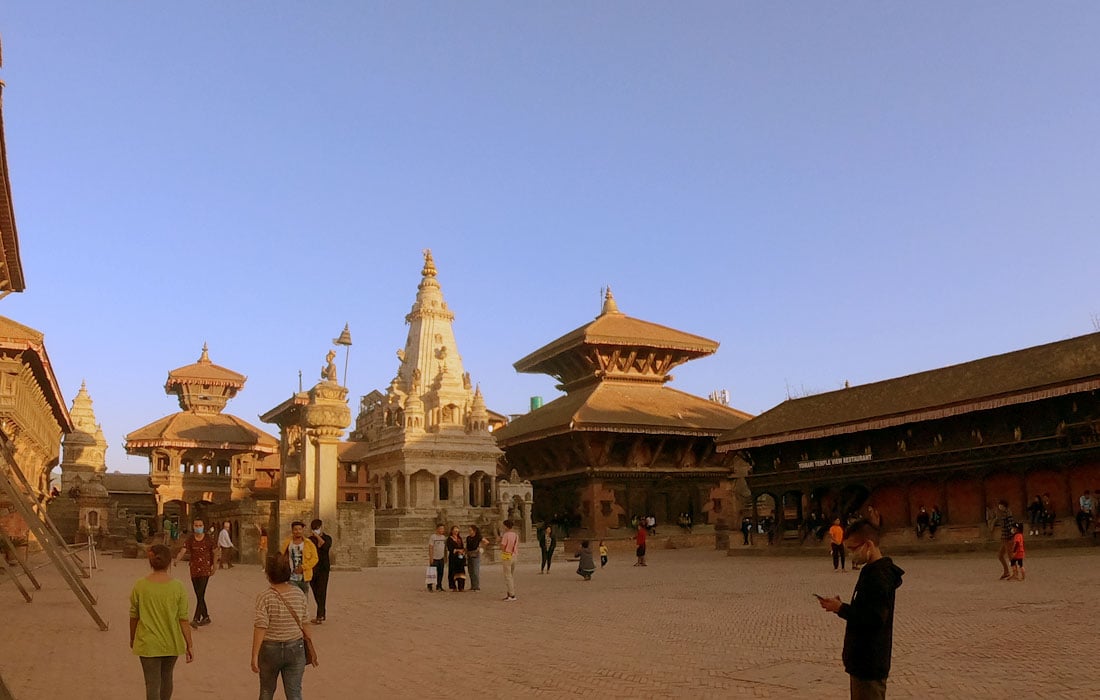 Bhaktapur Durbar Square- located to the east of Kathmandu city

The first day of adventure takes you to many tourist destinations, most of which are UNESCO World Heritage sites listed. After breakfast, the following are the places you will visit:

Kathmandu Durbar Square: Just a short walk away from your hotel is the Kathmandu Durbar Square is popularly known as Basantapur or Freak Street. The square consists of many temples, shrines, and courtyards, and most importantly, the ancient palace of the Shah kings, which has been transformed into the Hanuman Dhoka Museum. Visit the museum to witness the lifestyle of the royalties in the olden days, artifacts, armory, and more.

Boudhanath Stupa: In the northeastern outskirts of the city, you will visit the Boudhanath Stupa, a majestic dome, one of the largest in Nepal. As per tradition, circle around the stupa chanting prayers under the watchful eyes of the Buddha. You can visit the monastery in the vicinity and spin the giant prayer wheel. Stroll around the streets to enjoy the Tibetan Buddhist meals like noodles and Lhaphing.

Pashupatinath Temple: Pashupatinath is referred to as one the holiest Hindu temples globally, which attracts flocks of tourists worldwide at all times of the year. Although inaccessible to non-Hindus, the main temple can be seen from afar with its pagoda-style golden roof. You can stroll around the temple's vicinity to explore the different shrines.

Bhaktapur Durbar Square: Head to the oldest city in Nepal, Bhaktapur, located to the east of Kathmandu city. This Newari town is known best for being the ancient residence of the Malla Kings. The palaces have now been turned into the National Art Museum and Brass and Bronze Museum. Explore the golden gate, Nyatapol temples, and other shrines in the area.

Nagarkot is our final stop for the day. It is located further up a hill from Bhaktapur and is one of the most popular tourist destinations in the valley due to the fantastic mountain and sunrise views. Passing by forests of pine, you will reach your hotel. 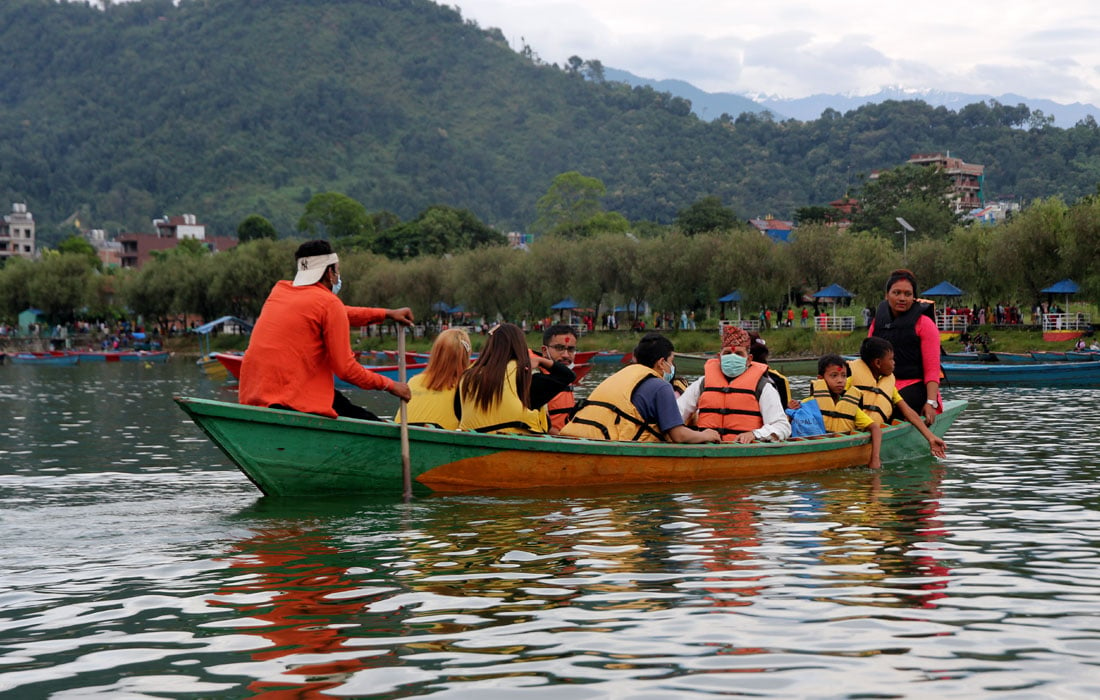 Early in the morning, before dawn breaks, take a short hike up the Nagarkot tower to witness the views of sunrise and the mountain glistening on the horizon. On a clear day, the views of Mt. Jugal, Ganesh Himal, and the Langtang range can be seen.

Following your breakfast at the hotel, you will drive back to Kathmandu to catch your flight to Pokhara city in the west.

Pokhara city is a tourist destination due to its natural beauty, and it is also a gateway to many tours and treks in the Annapurna region. After unpacking at your hotel, you will head off for a sightseeing tour around the popular destinations in the city:

Phewa Lake: Phewa lake is located in Baidam and is a freshwater lake that is best for boating. You can make a brief stop at the island temple of Barahi, where flocks of people gather for marriage ceremonies and festivals.

Bindhyabasini Temple: It is the oldest temple in Pokhara and is dedicated to Goddess Bhagwati, and is located in the center of the old bazaar. Many other temples and shrines of Shiva, Saraswati, Ganesh, Vishnu, and more.

Gupteshwor Cave and Bat Cave: Gupteshwor cave is located just about 2km from Pokhara airport and is 3kms long. There is a shrine of God Gupteshwor Mahadev hence the name. Bat cave is another limestone cave located nearby, with hundreds of bats residing in the walls. The bat cave has a wide opening but a narrow exit from where it is believed that those who pass by will have rid themselves of the sins.

Davis Falls: This deep gorged fall is located in the southern flank of the city. It is named after a woman from Switzerland who drowned here as she was swimming and died due to it.

Seti River Gorge: This gorge is easily viewed from a small KI Singh bridge at Bagar and the Mahendra and Prithvi highway bridge. You can witness the rapid flowing white water from above.

Tibetan Refugee Camps: If time permits, you can also visit the Tibetan village of Tashiling located in the south of Pokhara or the Tashi Palhel village in the north. You can interact with the locals who are seen producing woolen carpets and handicrafts. You can take a souvenir home and support the locals. 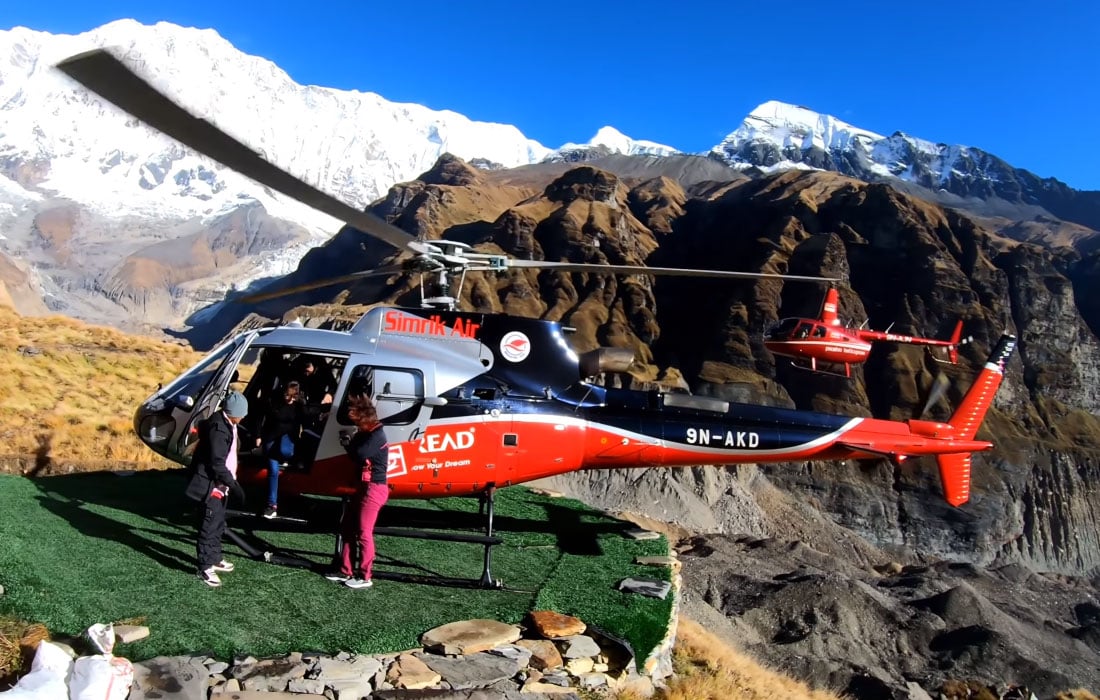 Your last day in Nepal will be the most exciting yet because you will fly to the Himalayas of the Annapurna region. From your hotel, in the morning, head on straight to the Pokhara domestic airport, where you will be met by the team who will take you on the helicopter tour. Keep your excitement from spilling as you board on the helicopter and fly up above the hills of Pokhara. You will leave the greenery and move towards the snow-blanketed mountains in a short while.

The helicopter will sway between the hills and towards the Machhapuchhre Base Camp. From there, you will witness the views of mountains such as Machapuchre, Nilgiri, Himchuli, Dhaulagiri, and more. The most majestic part of it is flying towards the Annapurna Base Camp. Views of Annapurna will be so up close and beautiful that you will not want to blink for a second. After a brief stop at Annapurna Base Camp, you can enjoy a cup of hot coffee and witness the views of the gigantic Annapurna Massif. After hiking a little further down, the helicopter will fly you back to Pokhara.

From Pokhara, you will take a flight back to Kathmandu, where you can do some souvenir shopping, then.

On this day, we will bid you farewell and transfer you to the airport for your final departure homeward. From the short yet fulfilling trip, you will remember the times you spent in Kathmandu and Pokhara and visiting the different religious and natural sites. The major highlight will still be the flight to Annapurna Base Camp.

Feel free to let us know if you wish to spend your following holidays exploring other mountains and cities in Nepal with the same level of excitement, facilitation, and ease. We will be more than happy to manage a similar and exciting tour for you in Nepal.

Kathmandu and Pokhara Sightseeing with Hiking and Paragliding -5 Days

United States of America
Apr 06, 2022
KTM PKR AND HELI TOUR
The service was fantastic and had timely heli tour to ABC. I didn't have to think and worry a bit. It was one of the best trips I had in Nepal.
Best Destination,
Yes
James Rose