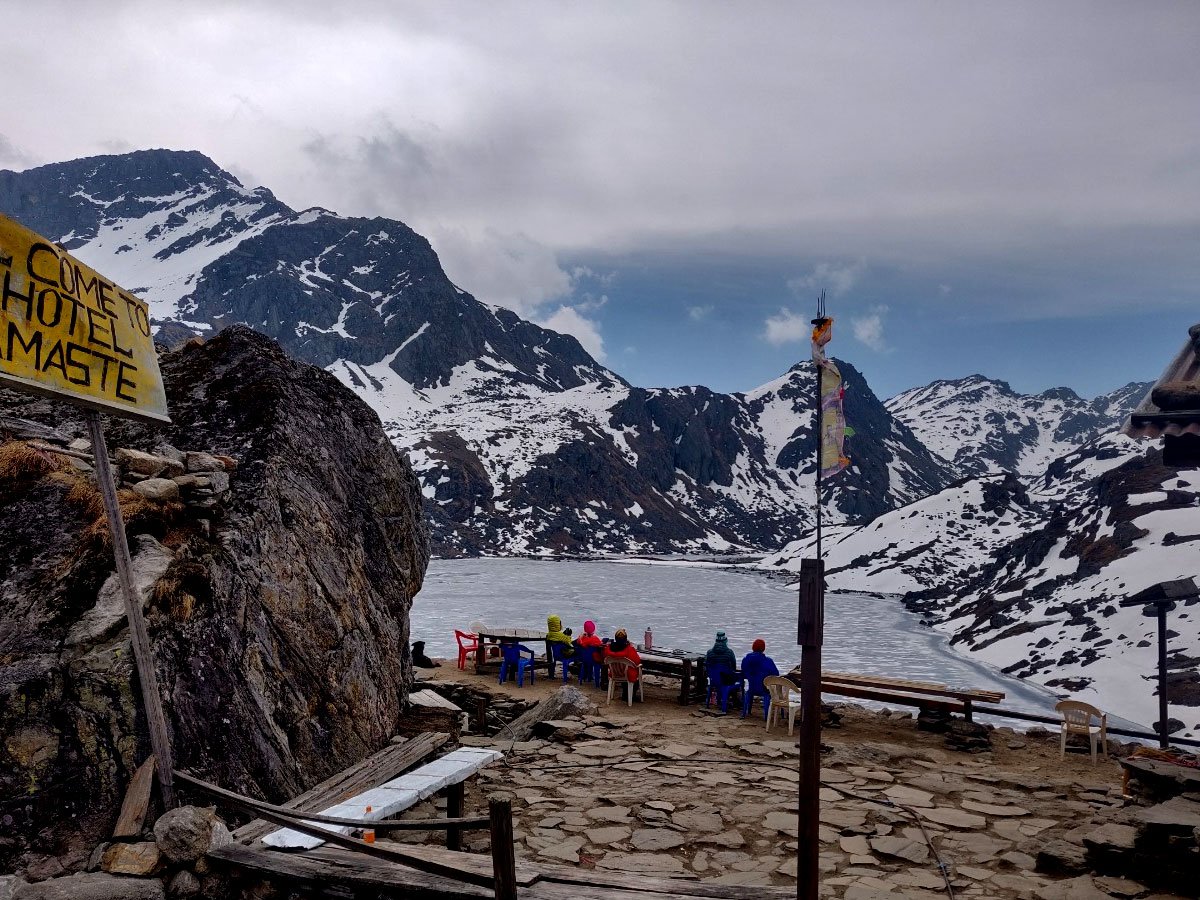 Surya Peak and Gosaikunda Lake trek is an 8 days escapade into the beautiful Langtang National Park region in northeastern Nepal. This trek is one of the unique experiences that lets you visit the rarely visited Surya Peak, along with witnessing some of the most beautiful freshwater lakes of high religious significance, including Gosaikunda. Throughout the trek, views of the Langtang range and other mountains in the northeastern region of Nepal make it one of the best short treks.

The trek begins from Dhunche town in Rasuwa, taking a trail to the Langtang National Park. Passing by different villages and lush treelines, the trail leads to Sing Gompa, then up to Lauribinayak for a straight hike to the beautiful array of lakes. From Gosaikunda, a day's hike on an uphill terrain leads to Surya Peak before returning to Gosaikunda and Dhunche.

In such a short period, this trek comprises exploring the wildlife, lakes, lush forests, views of majestic mountains, and even climbing a peak over 5000m. Surya Peak and Gosaikunda Lake trek is best for nature lovers, pilgrims, professionals, and novice trekkers who wish to experience the very best of the Langtang region trek.

Gosaikunda
Although I planned for Gokyo Lakes, I had to change the plan and go for short trek so I chose this trek. And I loved the adventure to Gosaikunda. It&#...

Renata Tobia   | March 27, 2022
Gosaikunda Lake Trek
Bimal was exceptional. He was astute and amazing. He knew every steps and turn along the route. He booked teahouse beforehand and made sure the food w...

Danielle Masson   | March 24, 2022
Trek to Surya Peak and Gosaikunda
Overall expereince was great. We had to wait extra days due to rain in Sing Gompa village. But the next day it was clear and we headed forward. The gu...

Robert utler   | March 22, 2022
Gosaikunda Trek
Trekked to Gosaikunda Lake and enjoyed a lot. My guide Shiva was a great guide. He was expert for this trek. I thoroughly enjoyed the adventure. We al...

Welcome to the land of mountains, Nepal. As you arrive at the Tribhuvan International Airport, you will be welcomed by our team and transferred to a hotel in Thame, Kathmandu. After some rest, you can head out to the streets of Thamel to enjoy the hustle and bustle of the typical Nepali life. Visit our office located nearby and clear all your queries with your guide. If any shopping needs to be done then do it in the afternoon.

Enjoy a warm Nepali authentic meal in the evening before wrapping up the day and heading to your hotel room for packing. 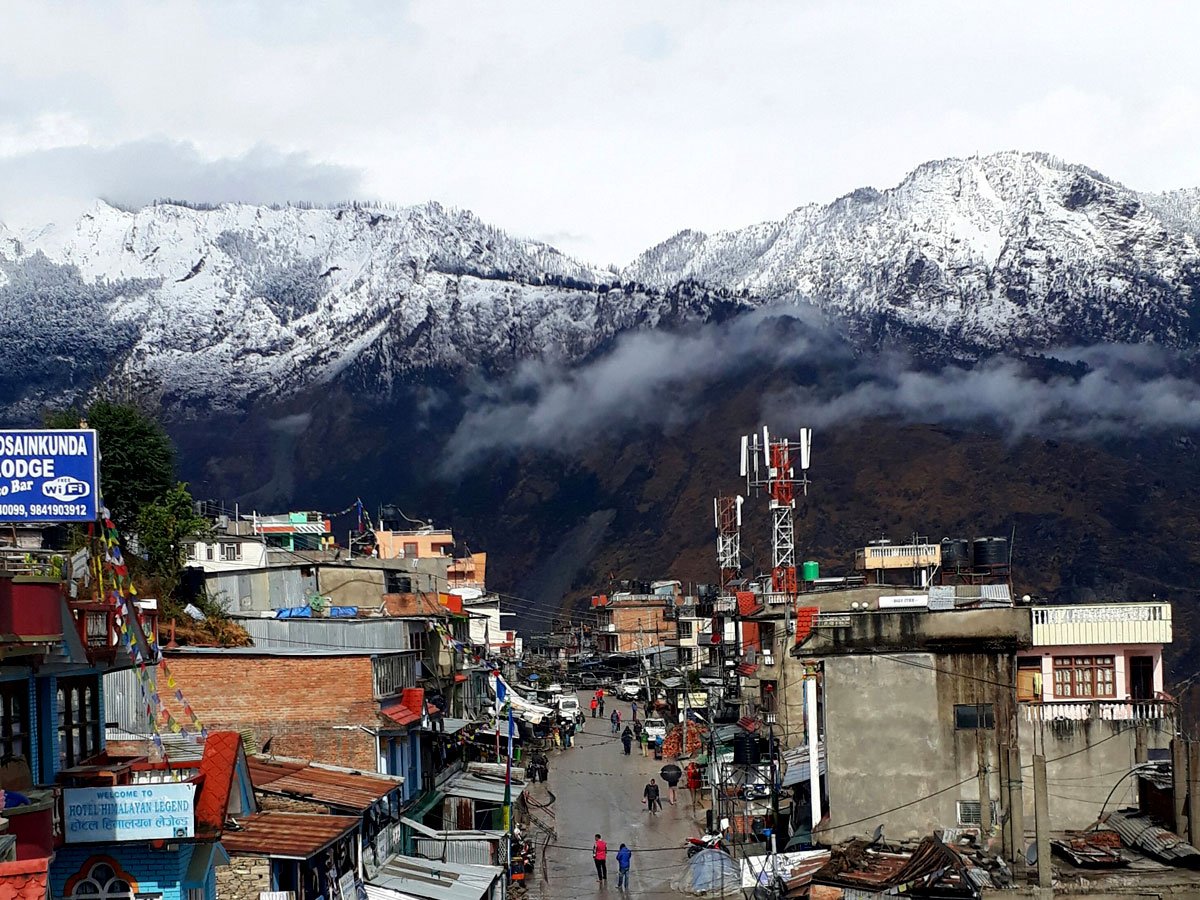 Dhunche, a small town in Rasuwa, Langtang region of Nepal

Wake up in the morning with high enthusiasm because you will leave Kathmandu for Dhunche in the Langtang region of Nepal. You will drive to the north, passing small villages, hill stations, and towns. You will make brief stops for food and rest. As you drive on the Prithvi Highway, the Trishuli river follows the side for a long duration. There is a rise in the altitude as you reach Rasuwa district. The cool breeze welcomes you to Dhunche, a town in Rasuwa.

The Nepal Army will inspect the documents before you enter the Langtang National Park.

If you reach on time, you can unpack your bags in the lodge or hotel and stroll around the streets. Views of the distant Langtang range and views of the green hill are visible. 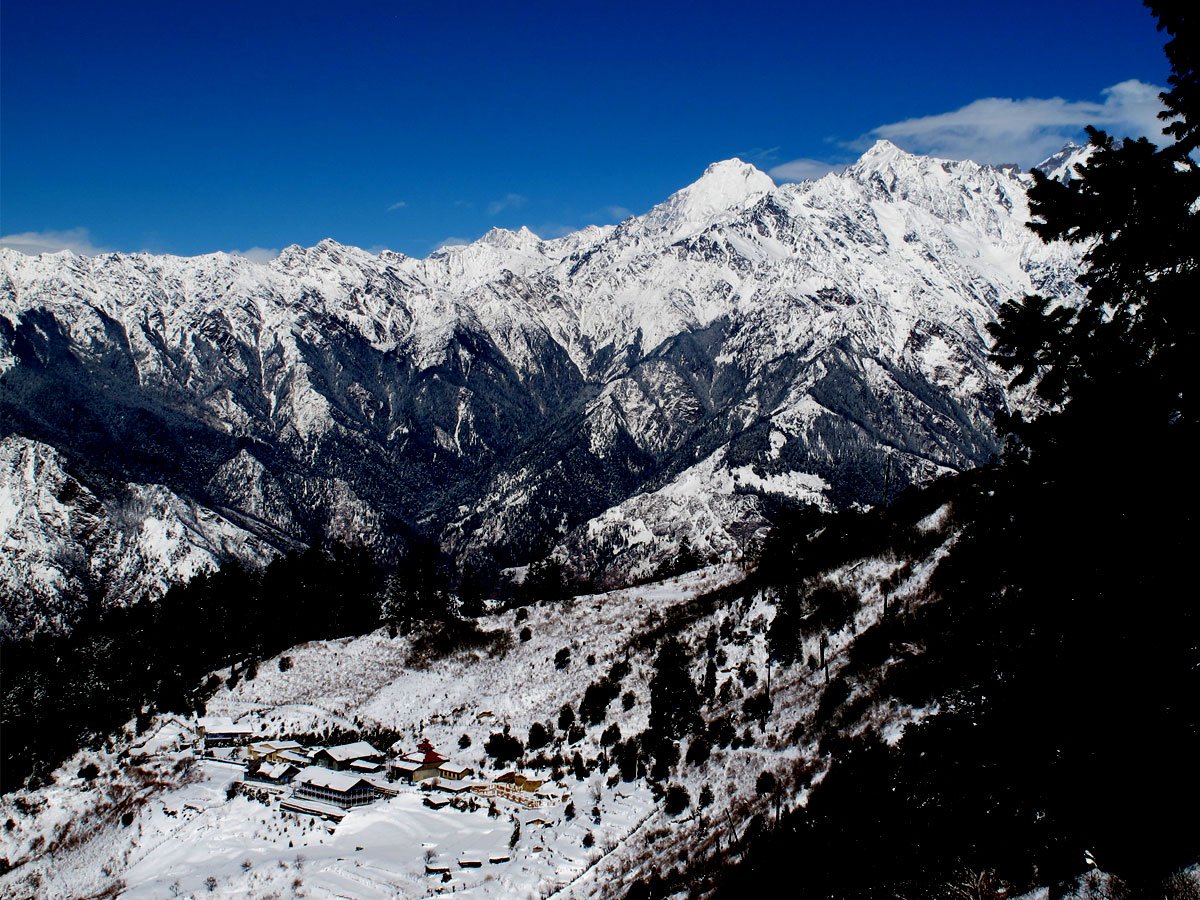 Trek starts on this day, so you can get prepared with your trekking gear and begin the walk straight forward. Passing by Dhunche, the trail leads to the lush forest with streams and the sound of a cool breeze. The walk gets a little tricky in some parts as the altitude rises. There are some sloppy terrains and some natural stairs. Take brief breaks to hydrate yourself.

As the altitude rises, the treelines recede. Along the way, you can experience the wonderful views of the pine trees and rhododendron and watch the unique birds flying around.

Eventually, you will reach Sing Gompa, a village sitting high on the ridge. You will be welcomed by an array of small huts and houses. One of the things you can instantly notice is a yak cheese factory in the middle, which you can visit after you unpack your bags in a tea house. You can take pictures of the farms, factories, and mountain views. 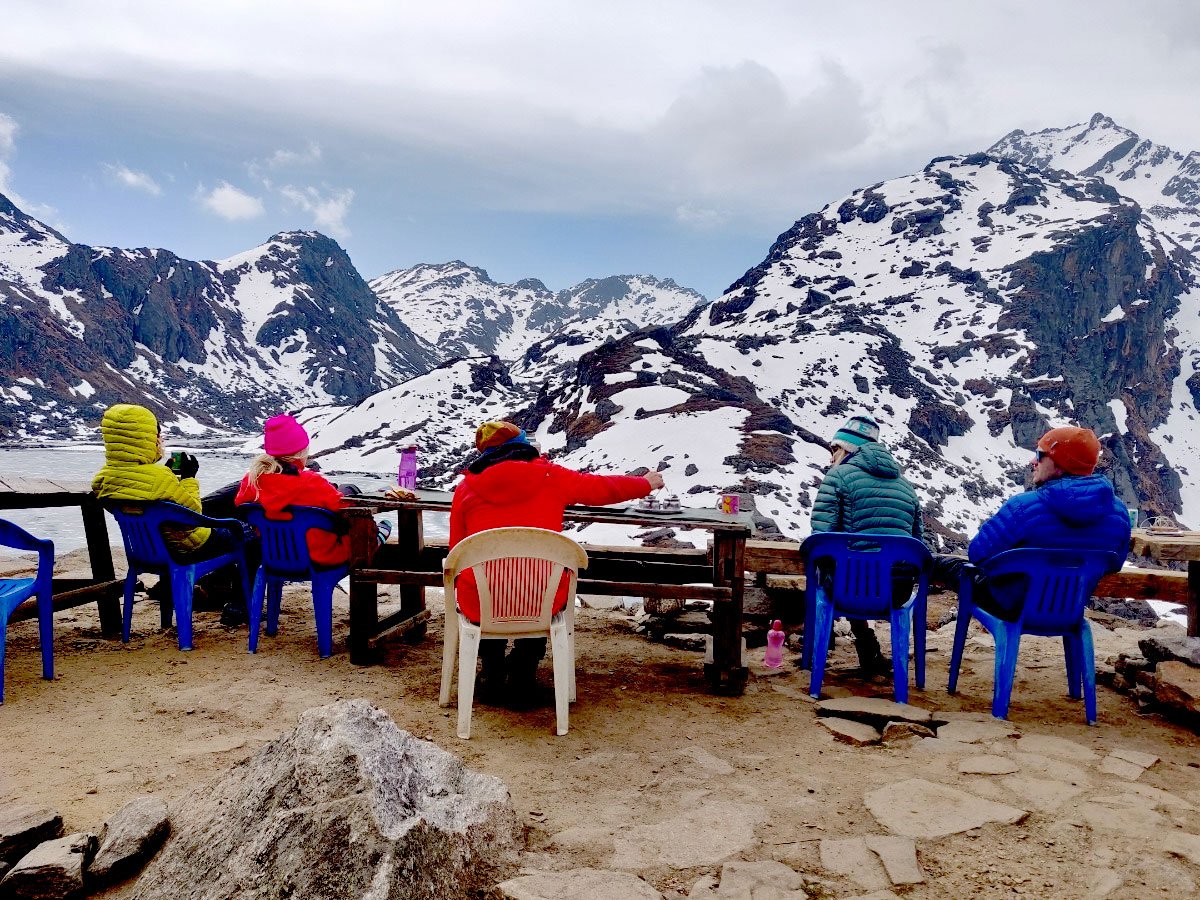 One of the most exciting days is here as you will trek from Sing Gompa to the holy lake, Gosaikunda. In the trek's initial leg, you will pass by some green pine forest and then through steep upward terrain to Lauribinayak. Due to the increase in elevation, you might require to make some stops. At Lauribinayak, it is very windy, but the views of Mt. Langtang from the viewpoint are amazing. Crossing the high pastures and a handful of tea houses, you will head to the viewpoint with Buddha's statue. After enjoying the view, continue your walk to a straightforward trail.

In a while, you will witness the lake Saraswati and Bhairav. Keep walking ahead to witness Lake Gosaikunda, the biggest lake formation in the region. Hills surround the lake on either side. It looks turquoise most of the seasons and is frozen in the winter season. You might see many Hindu and Buddhist pilgrims dip in the holy lake to rid themselves of any sins. In the middle of the lake, there is a black rock regarded as the shrine of Lord Shiva, under whom the lake is named. It is believed that after consuming poison, Lord Shiva struck this place with his Trishul to get water to quench his thirst.

Due to the rising altitude and lack of transportation, you will come across donkeys or humans carrying food and essentials. There are only a handful of tea houses with not many resources. 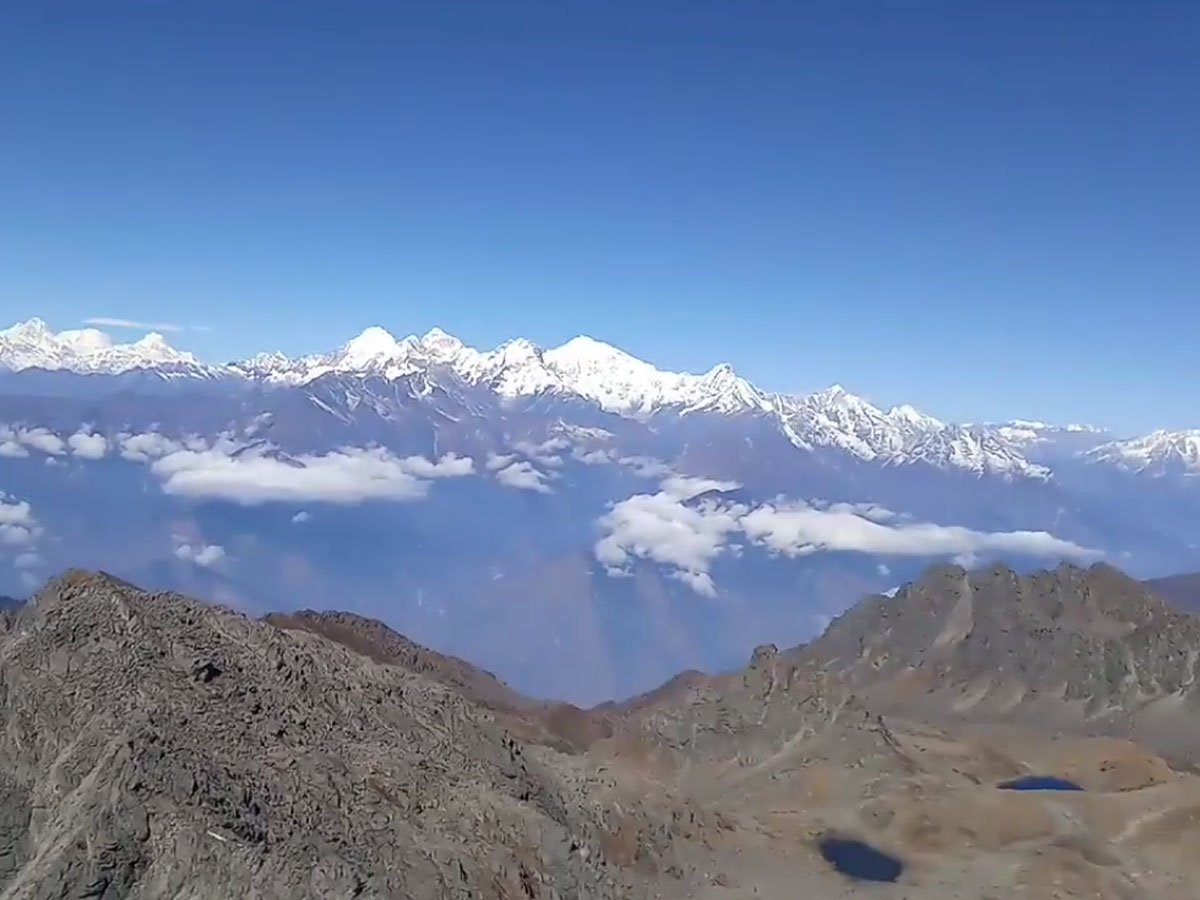 It is vital to take the acclimatization day to combat possible altitude sickness due to the rise in elevation. Keeping some of your belongings in the tea house, you can take a short hike to the nearby Surya Lake and Peak. You will walk uphill in the first leg of the hike, pass by a small temple and then walk in straight terrain. From above, you can witness clear views of Gosaikunda lake for a short while. From there, you will be walking on a trail covered on both sides by high hills. The hills and trails are covered in snow in most seasons. A little further away, you will come across the silent Surya Lake. The lake is known to be one of the highest in the Gosaikunda region, at 4,610m.

The hike to Surya peak, a little further, is challenging due to the elevation gain of up to 5,145m and passing through tedious moraines. The views of Langtang range, Naya Kang, Ganesh Himal, and Gaurishankar Himal are visible up close to this peak.

After enjoying the views, head back to the same route to Gosaikunda for the night. 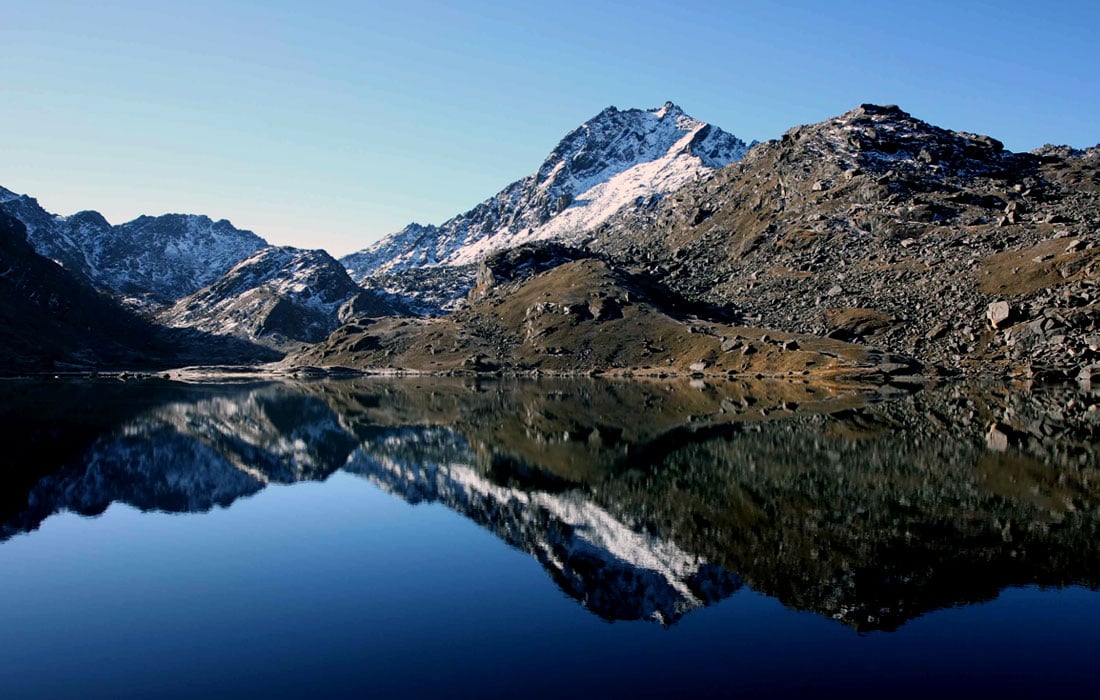 After your amazing visit to the Gosaikunda region, it is time to bid farewell to this adventure and the locals. You will take a downhill hike to Dhunche following the same trail. The downhill hike is relatively easier and quicker. Passing by rhododendron trees and witnessing a few wildlife here and there in the national park, you will head to the lodge in Dhunche. Enjoy the night with your team, drink and eat local produce and relax your muscles. 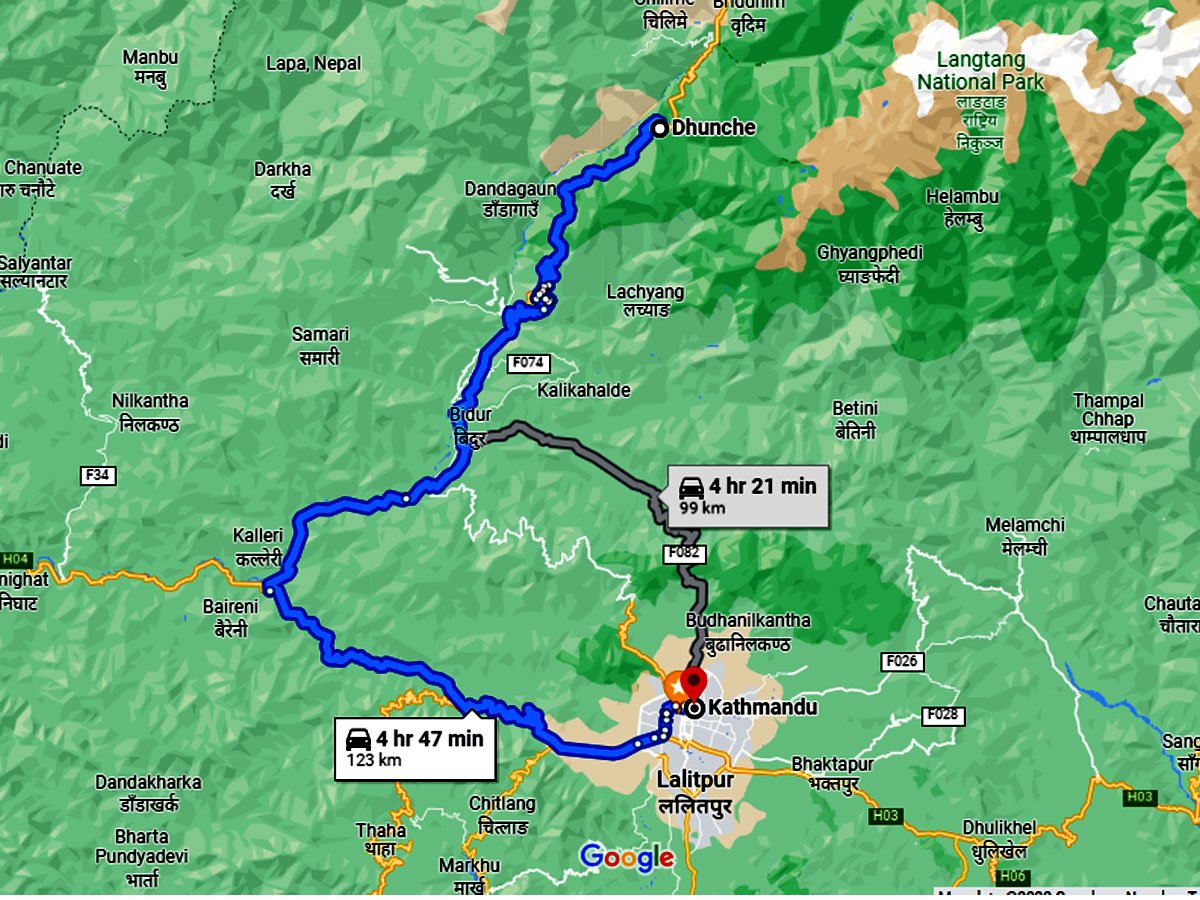 Packing up your belongings, prepare for a long drive back to Kathmandu. There might be a final check from the Nepal Army, and you'll be off the same route.

Upon reaching your hotel in Thamel, rest well before enjoying the evening in a local pub or club. If you want, you can buy some souvenirs to take back home.

On your final day in Nepal, our team will bid farewell to you in hopes that you will visit Nepal again. We will drive you to the Tribhuvan Airport's international terminal. If you wish to extend the tour to other areas in the Everest, Annapurna, or Langtang region, let our team know, and we will make quick arrangements for a similarly successful trek.

98%
Based on 4 reviews
Need Help Booking?
Are you satisfied with this itinerary?
GET A TRIP QUOTE
Not Really Satisfied?
Customize This Trip
Talk with our local travel specialist
Chat via WhatsApp

Everest Base Camp in April - Travel Tips, Weather and More

How to get to Annapurna Base Camp?

Read All Reviews Write your Review
97%

Spain
Mar 27, 2022
Gosaikunda
Although I planned for Gokyo Lakes, I had to change the plan and go for short trek so I chose this trek. And I loved the adventure to Gosaikunda. It's a beautiful trek. The guide for this trek was great guy. He took good care of me throughout the journey. The weather was perfect and the views were stunning. I find this trek easy, perfect for family trek. In fact, I met with a french family and many trekkers from USA. If you want to do beautiful trek, go for this trek.
Danielle Masson

Saint Barthelemy
Mar 24, 2022
Gosaikunda Lake Trek
Bimal was exceptional. He was astute and amazing. He knew every steps and turn along the route. He booked teahouse beforehand and made sure the food were served hot and delicious. We loved local dal bhat. I luckily spotted red panda and langurs along the way to Laurebina. The trail is easy and beautiful. I give 5 star to Bmal and this trek.
Robert utler

United States of America
Mar 22, 2022
Trek to Surya Peak and Gosaikunda
Overall expereince was great. We had to wait extra days due to rain in Sing Gompa village. But the next day it was clear and we headed forward. The guide was fun and friendly. He made sure we weren't bored. He let us interact with local people and the local cute children. We learned how they live and run the teahouse. We really enjoyed a lot .The Gosaikunda Lake was a pure beauty.
Heath Kelley