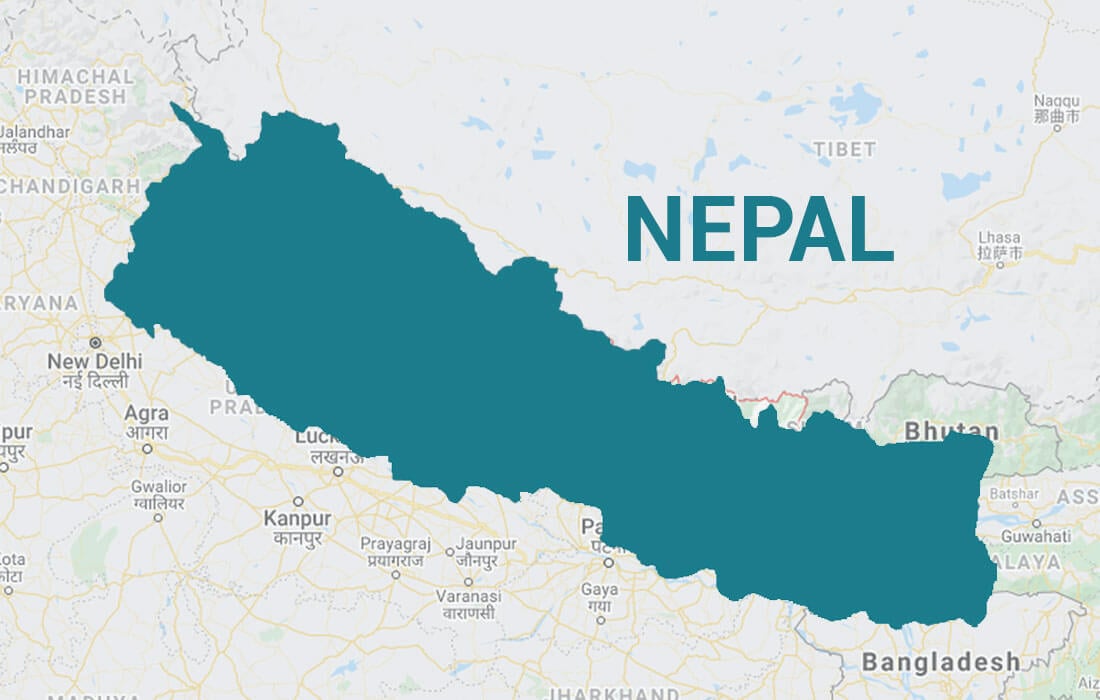 Spring (March to May ) and Autumn (September to November ) are said to be the best seasons to travel to Nepal, this beautiful country can be visited anytime of the year. You just need to know where to head to. Contrary to popular belief, Nepal is not only about mountains.

Geographically the country is divided into three regions- Himalayan or high mountains, mid-hills, and Terai region.  While the highest point in the country is Mount Everest at 8848 meters, the lowest point is Kechana Kalan, a small village in the Terai lowlands lying at an altitude of 60 meters.

It is advisable to plan your Nepal trip around the time of year best suited to the activity you are interested in. Get the most out of your vacation reading our ‘Best Time to Travel’ guide!

You will be interested to know that the Nepalese divide the year into six seasons or Ritu (season in Nepali) - Basanta (Spring), Grishma (Summer), Barkha (Monsoon season), Sharad (Early Autumn), Hemanta (Late Autumn) and Shishir (Winter).

While locally the year is divided into six seasons, the tourism sector follows the traditional seasonal division, ie, Spring, Summer, Autumn and Winter. Here’s what you can expect in each season. 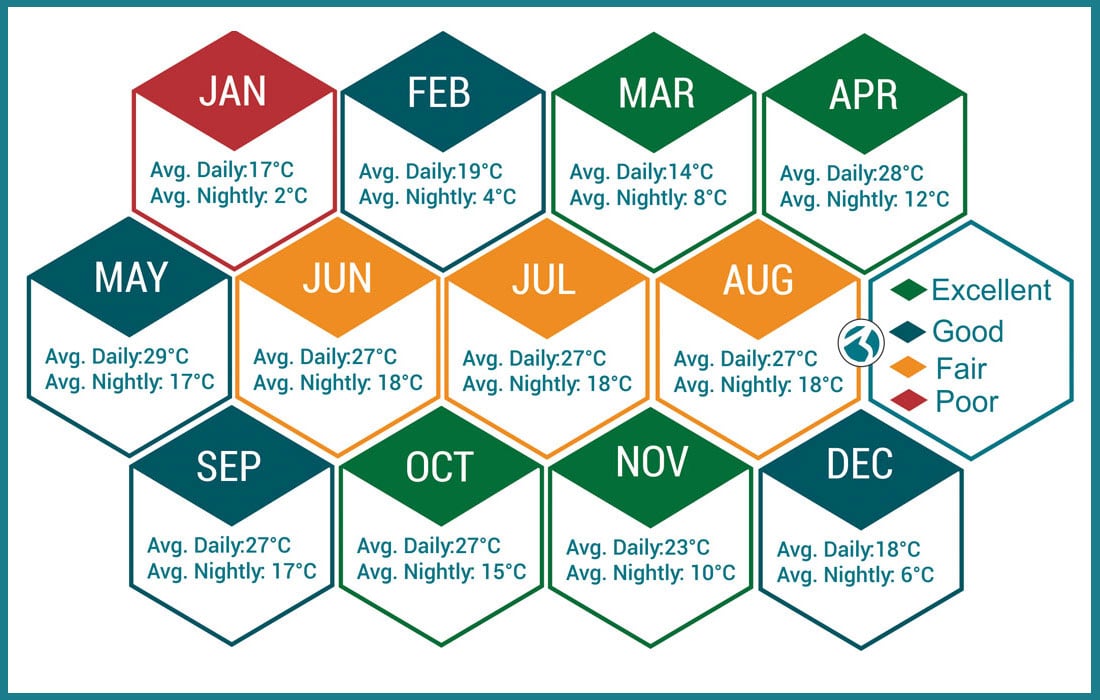 Spring (March To May)

Spring is one of the best seasons to travel in Nepal. The weather remains pleasant and warm, neither too hot nor too cold. Flowers bloom and the trekking trails are covered with rhododendron flowers and wild orchids. To celebrate the onset of this wonderful season colorful and vibrant festivals like Holi, Mahashivaratri, Bisket Jatra, etc. are celebrated.

Where to go and what to do in Spring?

This is the ideal season for Trekking and Hiking holidays. You can head to the mountains and walk beneath the high peaks. Take the popular Everest Base Camp Trek, Annapurna Base Camp trek, Ghorepani Poon Hill trek or traverse through the high mountain passes of Thorung La (Annapurna Circuit), Chola, and Renjo La. If you prefer solitude, then you can walk through the less crowded trails of Langtang Valley or Manaslu Circuit.

The hills around Kathmandu and Pokhara are ideal for day hikes and family excursions. Physically less strenuous and demanding than high-altitude treks, short day hikes take you across a rural landscape filled with terraced fields and small traditional villages.

Spring is the ideal time for helicopter tours. You can head to Everest or Langtang and enjoy aerial views of some of the highest peaks in the world. Everest Heli Treks offer you the luxury of trekking to EBC and returning to Lukla via helicopter. If you are an active person you can also try some multi-activity sports like paragliding, bungy jumping, mountain biking, etc.

The balmy days of spring soon give way to hot and humid summer. The temperatures rises and days become humid. In the Terai, region temperatures soar above 37 degrees Celsius during summer.

The summer season is also characterized by monsoon rains. While the early summer months are hot and humid with sudden bursts of thundershowers, mid-summer is generally wet with the Monsoon in full swing. There’s continuous rainfall till early September.  June, July, and August are the wettest seasons.

During this summer season, there is abundant greenery and though not an ideal season to trek, the verdant hillsides are worth exploring during this time of the year. Homage to the Rain God (Rato Machindranath Jatra) is offered during this time.

The birth anniversary of the world’s greatest teacher Lord Buddha is also held during this time.  Fertility festivals like Ubhauli and Teej are observed. The Brahmins change their sacred thread (Janai Purnima) in this season.

While most of Nepal enjoys the wet spell brought by the monsoon season, the region lying close to the Tibetan plateau remains relatively dry.  The regions of Mustang, Dolpo, and parts of Manaslu lie below the rain shadow and thus receive no rainfall during the summer months.

Where to go and what to do in Summer? 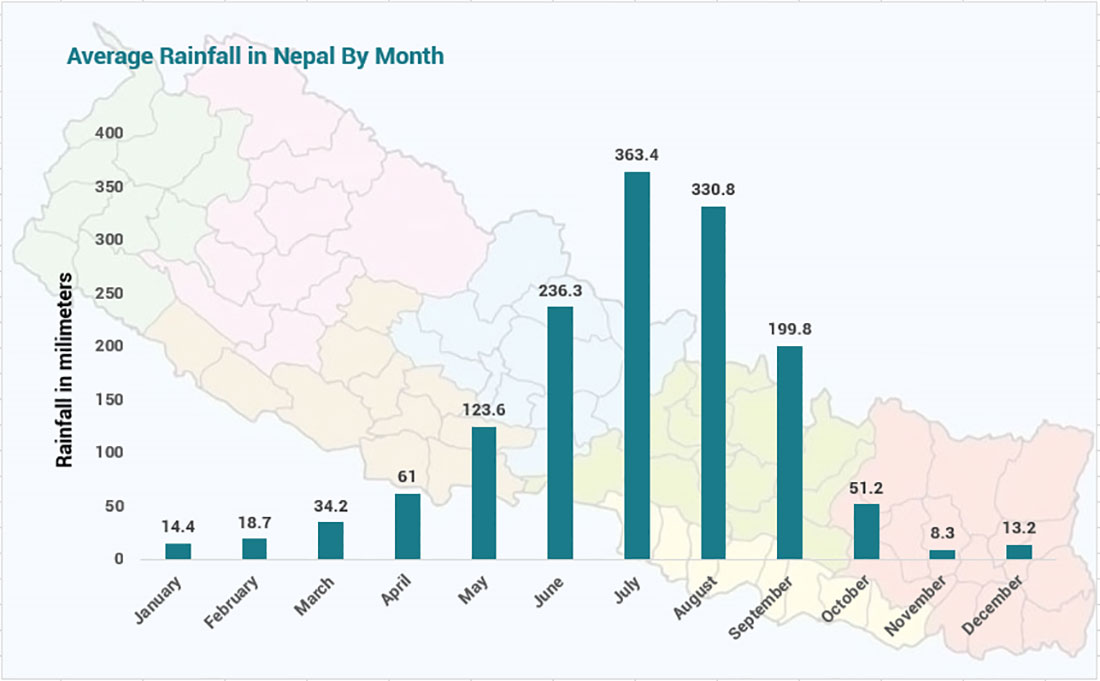 Moreover, the landscape is worth a view at this time of the year. The green paddy fields, verdant hills covered with mist and lush rivers, a summer trip to Nepal will reward you with glorious views. Take a village tour and explore the medieval villages of Khokana and Bungamati in Kathmandu Valley.

If you intend to trek to the mountains, you can head to Mustang, Dolpo, or the Tsum Valley. These places lie under the rain shadow and thus receive no rainfall. If you are a hardcore kayaker or rafting enthusiast you can ride on the rapids of the Himalayan rivers.

Autumn is the most popular season for tourists visiting Nepal. The skies remain clear. The days are warm and pleasant, but the nights can turn a bit chilly. The humidity disappears and the temperatures remain moderate. The trekking trails are crowded with trekkers as this season offers the best views of the Himalayan peaks.

Autumn is one of the peak seasons because the two biggest of the Nepalese, Dashain and Tihar, are celebrated around this time of the year. In Kathmandu, the annual Indra Jatra is held where the chariot of the Living Goddess Kumari is pulled across the streets of the old city.

Where to go and what to do in Autumn?

Autumn, like Spring, is another favorite season for travelers visiting Nepal. This season sees the return of the trekkers and mountain climbers. Popular trails like Everest and Annapurna are filled with trekkers from all over the globe. The mountain views are absolutely amazing during this time as the weather remains clear and stable.

Hiking around the mid-hills during this time will allow you to be a part of Dashain and Tihar festivities, the major festivals celebrated by the Nepalese. Nepalese are generally warm and friendly and they love inviting guests to their home, however humble it may be. Traveling in the Terai lowlands is also ideal during this time. You can visit Lumbini, the birthplace of Lord Buddha, Chepang villages, Chitwan National Park, Bardiya National Park, etc.

As the weather remains stable, outdoor activities like paragliding, white-water rafting, bungy jumping, mountain biking, etc. can be done during this time.

The best time to do Everest Base Camp trek and Annapurna Base Camp trek is either spring (March, April, May) or Autumn (Sept, Oct, and Nov). During the spring season, the trails will be covered with blooming flowers and the weather is excellent with clear blue skies.

During Autumn, the monsoon clear away and the snow melts, leaving behind naked mountains with very less snow on them. Autumn is ideal for trekking and it is also one of the best seasons in Nepal for merrymaking and travel.

In the mountainous and hilly regions, winters are harsh. Temperatures dip below 0 degrees in the high mountains. Snowfall and many locals are living in high altitudes migrate to the lower regions to escape the freezing cold. In the mid-hills like Kathmandu and Pokhara, the temperatures plummet almost to 4degrees celsius.

Winter is the best season to explore the Terai lowlands, as the weather remains generally pleasant during this time. Jungle Safaris to the national parks of Chitwan, Bardia, and Koshi Tappu can be scheduled around this time.

Where to go and what to do in Winter?

Winter is ideal for wildlife safaris and city tours. Though city tours can be done any time of the year, you can explore the cultural sites in peace during off-seasons like winter without hordes of tourists jostling around you.

Winter is the perfect time for the city and cultural tours. You can explore the medieval durbar squares in Kathmandu - Basantapur, Patan, and Bhaktapur. You can also travel to ancient Newari towns of Panauti, Bandipur, and Sanga. You can combine multi-city tours in your holiday itinerary and visit Kathmandu, Pokhara, Chitwan, and Lumbini.

You can also head to the lowlands of Chitwan, Bardiya, and Koshi Tappu for a wildlife experience. During winter, birds from the Tibetan highlands and the Himalayan mountains migrate down to warmer areas like Chitwan and Koshi Tappu.

Winter is the right time for bird-watching tours. You can also discover the geographical diversity of Nepal by taking a road trip to the Terai lowlands. Explore Nepal’s western regions - Karnali, Mugu, Khaptad, and border towns.

Nepal may be a tiny country, but its diversity in terms of landscape and culture will take your breath away. The country is not only about mountains. Its lowlands and valleys are also equally rich in natural beauty and culture. There’s so much to explore and discover in Nepal that a season may not be enough for you!

Naba Raj Amgai, stepped into the world of travel and tourism in 1996. He is Founder and Managing Director of Third Rock Adventures.

Beginning his journey in the tourism industry as a humble Porter Guide to founding hospitality establishments and an adventure travel company, he has come a long way.

In a career spanning more than two decades, he has achieved more than anybody dreams of achieving. Along with his professional achievements, his selfless contribution towards his community and society has won him a lot of accolades and praises.

Having dedicated more than two decades in the tourism and hospitality sector, he has amassed a wealth of experience.

After passing high school, he began helping out some trekking guides and was soon recruited as a porter guide at a reputed trekking agency. Within a short time, he was individually guiding clients across the well-known trails of the Himalayas.

He went on to lead tour groups on multi-country tours to Nepal, Tibet, Bhutan and India. Being a part of mountain climbing expeditions familiarised him with expedition logistics and operations. Later on, he went to become the Executive Director and took over the reins of Operations, Sales and Marketing departments. Spending several years in the tourism field has made Naba Raj Amgai a destination expert.

Travelling is his passion and he has been to many countries across the world – USA, Canada, Australia, Japan, Holland, Germany, Austria and many parts of Asia.

His journeys to different parts of the world have enriched his travel experience and knowledge. This experience has been instrumental in planning and organizing successful trips for several clients.

As of today many reputed travel companies, hotels and restaurants are under his leadership. A dynamic and proactive leader, he continues to inspire and motivate people from all walks of life. 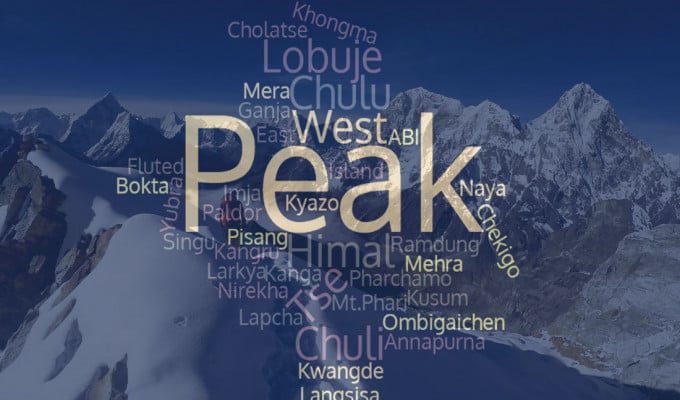 Getting to Jomsom and Muktinath

Getting from Kathmandu to Lumbini

How to get TIMS card and trekking permits in Nepal

How to Get to Chitwan National Park from Kathmandu?

Family Holidays in Nepal - What You Need To Know

How to get Pokhara from Kathmandu?

How Difficult is the Annapurna Base Camp Trek